Coronavirus deaths in the United States have topped 90,000, but President Trump claims the number of infections are going down as states reopen their economies.

On Sunday, the United States reached a grim milestone when the number of Americans who’ve died of the coronavirus reached 90,068.

Saturday saw a total of 1,201 deaths, which was down 409 less that those recorded on Friday

The number of coronavirus cases in the United States hiked up as well, with 1,518,964 Americans infected with the deadly virus.

Despite the growing number, President Trump on Sunday claimed that coronavirus cases were going down in the Untied States.

He added in an earlier tweet that his administration was excelling at finding a solution to the coronavirus pandemic.

‘Doing REALLY well, medically, on solving the CoronaVirus situation (Plague!). It will happen!’ he wrote.

States across the country have begun to reopen their economies and begin phasing out stay-at-home guidelines.

But some states, including Texas, are still seeing an increase of coronavirus cases as residents venture out into the public.

The biggest jump in the number of cases reported Thursday came in Dallas County, where 243 new cases were reported, bringing its total to 6,602.

That was still second to Harris County, where 205 new cases reported Thursday brought its total to 8,621.

The biggest increase in COVID-19-related deaths was reported in El Paso County, which reported eight new deaths on Thursday. 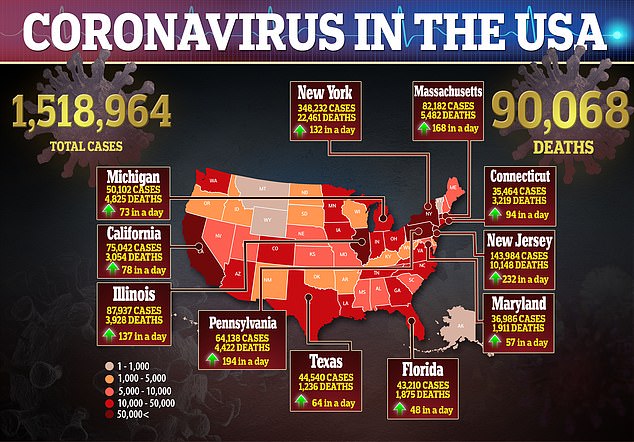 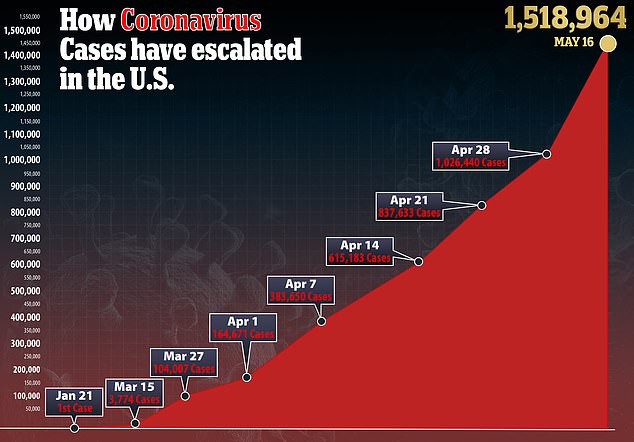 A spokesperson for Abbott told ABC News that the number of cases are increasing because there is more testing.

‘The governor has been clear that as the state of Texas conducts more tests, we will see the raw number of

Trump’s optimism comes as officials have repeatedly criticized his handling of the pandemic, including former president and political foe Barack Obama.

Obama panned ‘so-called grown-ups, including some with fancy titles and important jobs’ who do ‘what feels good, what’s convenient, what’s easy.’

‘That’s how little kids think,’ he added, ‘which is why things are so screwed up.’

He made similar comments on Saturday on ‘Show Me Your Walk, HBCU Edition,’ a two-hour event for students graduating from historically black colleges and universities.

‘More than anything, this pandemic has fully, finally torn back the curtain on the idea that so many of the folks in charge know what they´re doing,’ Obama said. ‘A lot them aren´t even pretending to be in charge.’

Earlier this month, he strongly criticized Trump´s handling of the pandemic as an ‘absolute chaotic disaster’ in a call with 3,000 members of his administrations. 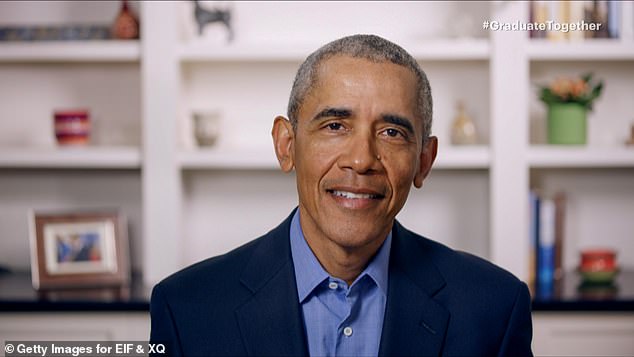 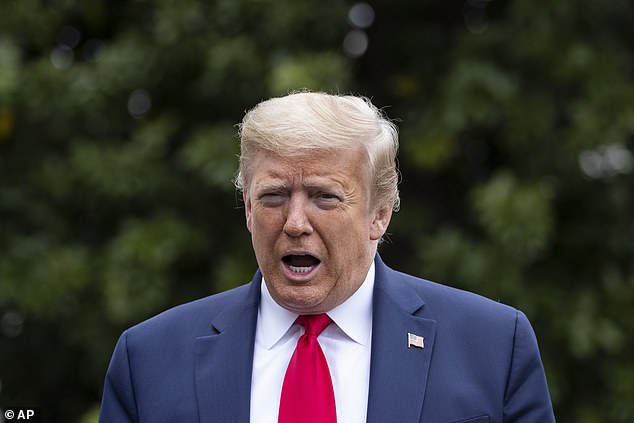 The commencement remarks were the latest sign that Obama intends to play an increasingly active role in the coming election.

He has generally kept a low profile in the years since he left office, even as Trump has disparaged him.

Obama told supporters on the call that he would be ‘spending as much time as necessary and campaigning as hard as I can’ for Joe Biden, who served as his vice president.

Trump told reporters that he had not heard Obama’s comments, but called him ‘grossly incompetent.’

‘Look, he was an incompetent president That’s all I can say. Grossly incompetent,’ Trump asserted.

Trump had already launched several tweets at the 44th president and encourage #Obamagate on Twitter after it was reported Obama and Joe Biden knew the FBI was seeking to investigate and ‘unmask’ the identity of former National Security adviser Michael Flynn. 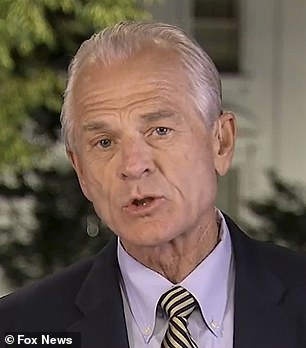 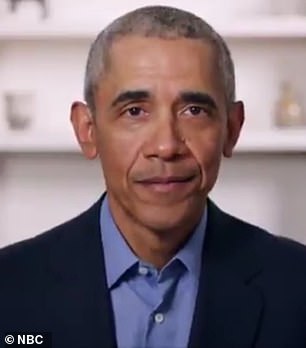 ‘I want to congratulate the former president on his new job as press secretary for the candidate locked in the basement. Good job,’ Navarro said in an interview with Fox News.

Meanwhile, Eric Trump suggested in a Fox News interview that the coronavirus pandemic is a Democrat scheme to sabotage his father’s re-election campaign.

‘They think they are taking away Donald Trump’s greatest tool, which is being able to go into an arena and fill it with 50,000 people every single time,’ Eric Trump said of Democrats during an interview which aired on Fox News on Saturday.

‘You watch, they’ll milk it every single day between now and November 3.

‘And guess what, after November 3 coronavirus will magically all of a sudden go away and disappear and everybody will be able to reopen 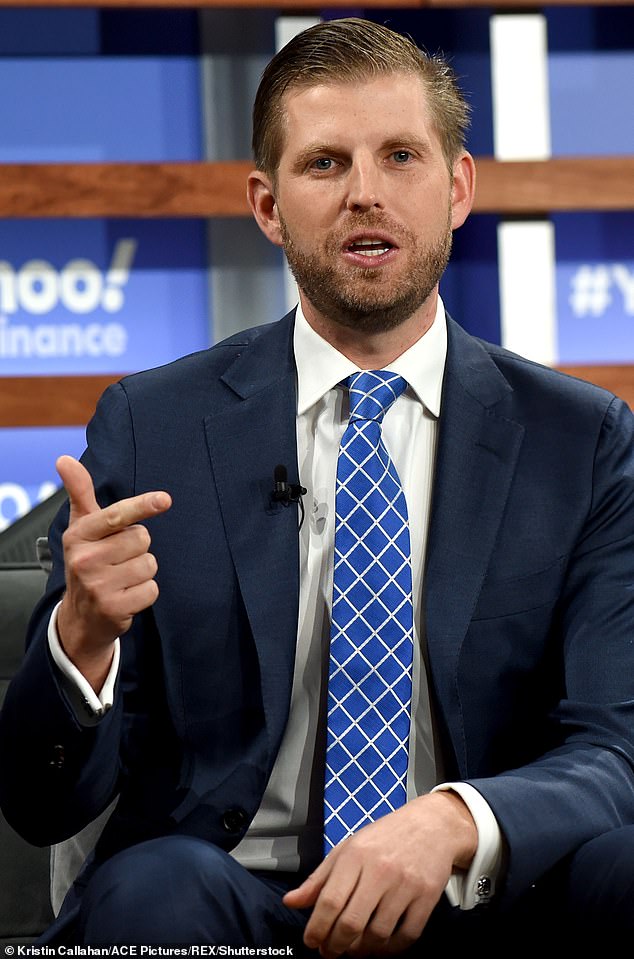 During an interview with Fox News, Eric Trump (pictured) suggested that the coronavirus pandemic was manufactured by Democrats to sabotage his father, Donald Trump

In February, President Trump called criticism of the White House response to the coronavirus outbreak a ‘new Democrat hoax’.

At the time, there were only dozens of confirmed COVID-19 cases in the US and just a few deaths.

During his Fox News appearance on Saturday, Eric Trump told Judge Jeanine that the criticism of his father’s administration over its preparedness for the pandemic was a political tactic used by Democrats and their ‘propaganda arm’ – the news media.

‘They’re doing it for one reason: They want to hurt Trump,’ Eric Trump said.

‘Now they’re trying to do it with coronavirus.’