A doctor working on the NHS frontline amid the coronavirus pandemic has spoken of his joy after he was able to treat the heart surgeon who saved his life 20 years ago.

Dr Shakil Rahman, the lead respiratory consultant at Epsom and St Helier NHS Trust, was able to help Venkatachalam Chandrasekaran, known as Mr Chandra, ‘in his hour of need’ after he was rushed to hospital with Covid-19 and pneumonia.

Mr Chandra, a cardiac surgeon at St George’s hospital in Tooting, London, was admitted to Epsom Hospital where he was met by his former patient.

The surgeon had performed a minimally invasive bypass procedure on Dr Rahman when he was admitted to hospital with a sudden and near-fatal blockage in one of his heart arteries in 1999.

Dr Rahman, who stayed in touched with the former surgeon who saved his life, was put in charge of Mr Chandra’s treatment during his ten days in hospital.

Speaking of the moment he finally saw Mr Chandra leaving the hospital after receiving successful treatment for the virus, Dr Rahman said he was ‘really joyful’.

He told The Evening Standard: ‘It was a great feeling to see Mr Chandra leaving Epsom hospital after recovering following admission with Covid-19 pneumonia.

‘He was admitted by me, quite profoundly ill. An extremely kind doctor, a very well-known man, a heart surgeon with incredibly gifted hands.

‘It was really joyful for me and the whole respiratory team to be able to treat him in his hour of need, getting him well and seeing him leaving hospital with his family encouraged by all the clapping and laughter.’ 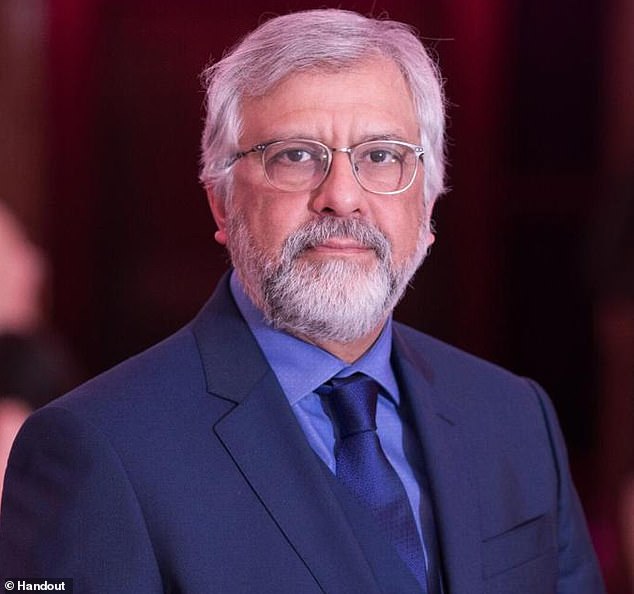 Dr Rahman, who led Mr Chandra’s treatment in hospital, described his joy at being able to successfully treat his former surgeon during his ‘hour of need’

The touching scene comes as Britain’s daily Covid-19 death toll dropped again today, as officials announced 428 more victims – the lowest jump on a Thursday since the end of March.

Official figures released by the Department of Health showed that 33,614 coronavirus patients have now died across all settings in the UK, including hospitals and care homes, since the crisis began.

Health chiefs also revealed a further 3,446 Britons have tested positive for the virus.

Earlier today, millions of Britons across the country paid tribute to the thousands of NHS staff and healthcare workers putting their lives at risk to help fight the pandemic during the Clap for Carers event at 8pm.