The Government’s plans to allow more than 2 million of England’s most vulnerable people outside lacks any scientific rationale and amounts to a public relations exercise, a virus expert has said.

Families will be able to see their elderly relatives again today as millions of those who have been ‘shielding’ due to a high risk of suffering severe coronavirus symptoms are allowed to spend time outdoors.

As part of the easing of lockdown restrictions, 2.2 million of the country’s most vulnerable will be able to go outside with members of their household, while continuing to follow social distancing guidelines.

Those who live alone will be able to meet outside with one other person from another household.

But Dr Stephen Griffin, associate professor at the University of Leeds’ school of medicine, told the Guardian the move ‘seems to lack any obvious rationale other than to add to an ongoing ”good news” narrative that appears to have little grounding in reality’. 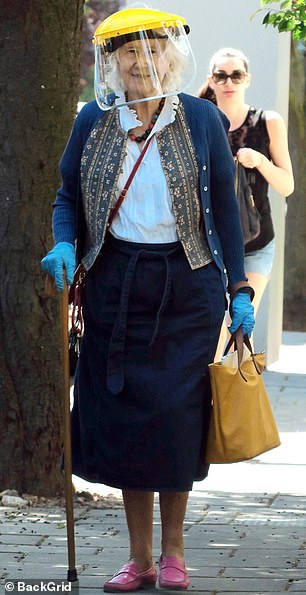 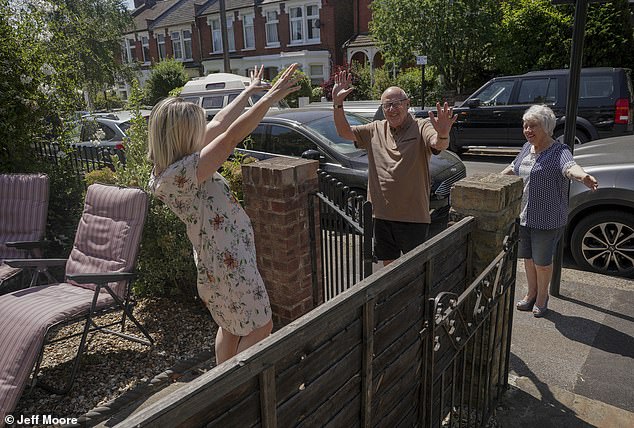 And in a response to Health Secretary Matt Hancock’s tweet announcing the move, Oxford-based palliative care expert Dr Rachel Clarke said: ‘Why on earth would you announce this without first communicating with primary care teams? You know, the GPs who actually look after these vulnerable patients.’

Who is ‘vulnerable’ and who should have been ‘shielding’?

Britain was told to follow social distancing guidelines as the country entered lockdown months ago.

But those at higher risk of becoming seriously ill from coronavirus were instructed to ‘shield’, minimising contact with others as much as possible.

Those who are ‘clinically vulnerable’ includes everyone over 70. This group was not told to ‘shield’ but was still advised to take precautions.

But the ‘clinically extremely vulnerable’, including those with severe health conditions, were contacted by the NHS and advised to ‘shield’.

The tweet, which has been liked more than 12,000 times, added: ‘Do headlines mean more than best patient care?’

‘More than 42,000 people are diagnosed with bowel cancer each year, and many of those living with the disease – and their families – have been shielding for several weeks to avoid catching coronavirus.

‘They will be rightly concerned at the seeming lack of evidence that says it’s suddenly now safe for them to go out after taking such major steps to protect themselves.’

‘We are now faced with further confusion about why the advice has changed so suddenly when only a few weeks ago the government’s recovery strategy said shielding would have to remain in place for a further period,’ he said.

Head of police at the MS Society, Phil Anderson, said his organisation was very concerned that the news had come from nowhere, and the extremely vulnerable will ‘rightly want to hear a lot more about the scientific evidence showing this will be safe for them’. 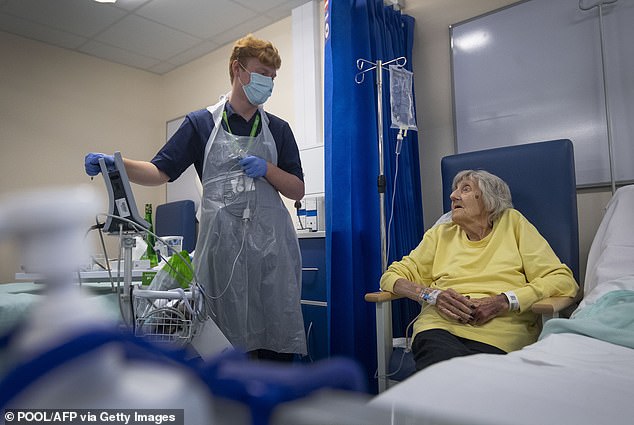 Families will be able to see their elderly relatives again today as millions of those who have been ‘shielding’ due to a high risk of suffering severe coronavirus symptoms are allowed to spend time outdoors (pictured: NHS Seacole Centre at Headley Court, Surrey on May 28) 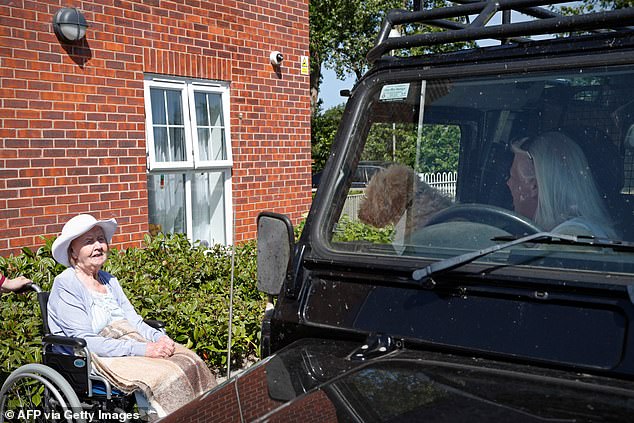 As part of the easing of lockdown restrictions, 2.2 million of the country’s most vulnerable will be able to go outside with members of their household. Pictured: Judy Gillingham (right) shows her dog to her friend Dorothy Saxby (left) during a drive-through visit at Gracewell, a residential care home in Adderbury, on May 28 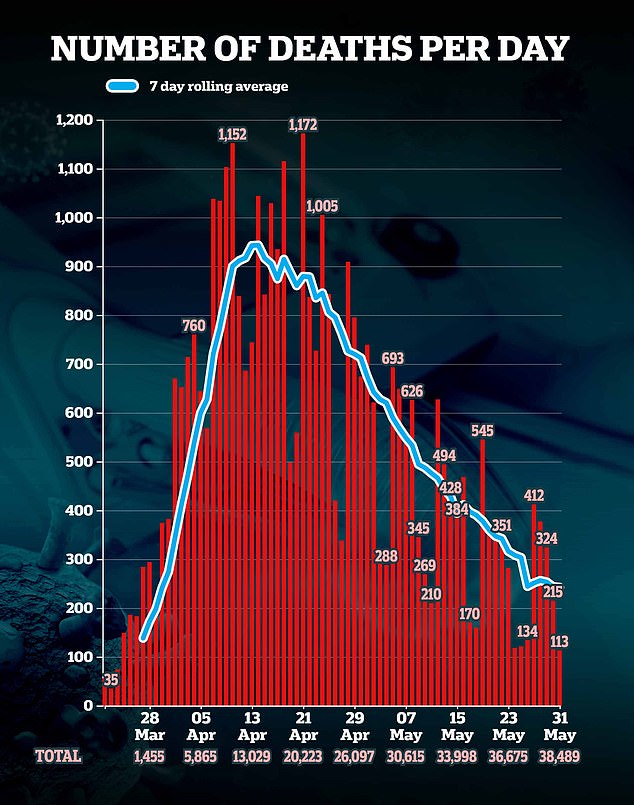 It comes as figures show the number of deaths of patients with coronavirus nears 40,000

Vivienne Tickle has been shielding since receiving an official text on March 23, followed by a letter, due to her asthma being classed as severe because of the medication needed to control it.

She told MailOnline: ‘This sudden lifting seems so out of the blue, no explanation or real guide other than to say we can go out. I feel quite nervous I don’t think we have everything in place, the daily death rate although considerably lower still remains in the hundreds.

‘My sister died during the peak week, 300 miles away no visiting, no funeral attendance. Does the government really have any idea how hard a death bed goodbye is with a nurse holding the phone, whilst you try to get some words out through your sorrow?

‘My sister’s cause of death – Covid-19 pneumonia and asthma. So I think until we have more medical and scientific evidence as to why it’s suddenly safe for us to go out today, I’ll be treating it with caution. I sincerely hope there is evidence to back it up and isn’t a PR exercise there are millions of lives at stake here.’

David Blythe, 75, has COPD, asthma and emphysema. He said: ‘For the past 70 days my daughter-carer has protected me rigidly during my period of quarantine. Today I am told I can go outside, but in my diary, my quarantine does not end until June 22.

‘I feel the ending of my quarantine is not based on solid medical fact. I believe all the relaxing of lockdown regulations are the result of the Government backing down in the face of public opinion. So the thought of catching Covid-19, after being so well protected, is not worth the risk. I shall stay shielded until the 22nd, and look at the situation again then.’

Linda Holland, 68, with emphysema, said she and her mother, 88, have both been shielding.

‘I have told mum that we are still in lockdown until at least the end of June, possibly longer,’ she said. ‘Seeing all the crowds on our local beaches is more than enough to make me feel we are far better off as we are. At home with our little dogs and safe.

‘Yes I have children and grandchildren but we are all aware that grandma and mum need to be safe.’

Over the weekend Boris Johnson hailed the ‘resilience’ of those who have been shielding since March, with many having no face-to-face contact since the beginning of the coronavirus pandemic.

He spoke after England’s deputy chief medical officer pleaded with Britons ‘not to tear the pants out of’ the loosened lockdown when more freedoms are granted on Monday.

Professor Jonathan Van-Tam warned that abusing new liberties would fuel the spread of infection and said that the lifting of curbs should be treated as if gently lifting the lid on a coiled spring – ‘painstakingly’ slow. 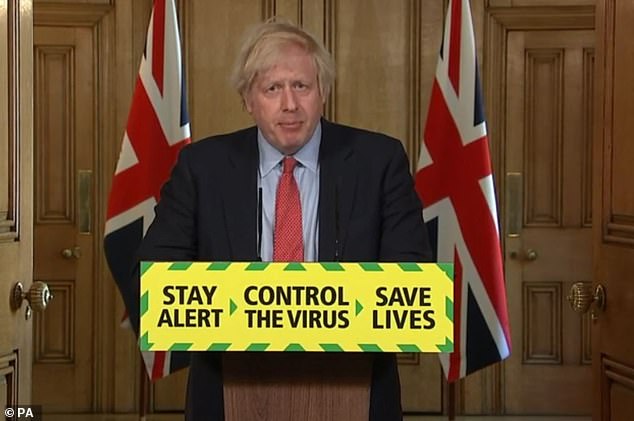 Over the weekend Boris Johnson hailed the ‘resilience’ of those who have been shielding since March, with many having no face-to-face contact since the beginning of the coronavirus pandemic

The top scientific adviser said the country was at a ‘very dangerous moment’ in the crisis and gave his colourful instruction to the public as thousands of sun-seekers packed on to beaches to bask in scorching weather.

The president of the Association of Directors of Public Health has said experts are concerned ministers are lifting the coronavirus lockdown too quickly, claiming the Government’s own five tests have not been met.

‘It is below one but it’s a very limited room for manoeuvre isn’t it and we know how quickly this virus can spread and it’s difficult to predict then with quite a lot of the measures being eased at once what the impact that will have on the R value.

‘We’re also concerned about meeting all the other operational challenges ready to meet a potential rise in infections.’ 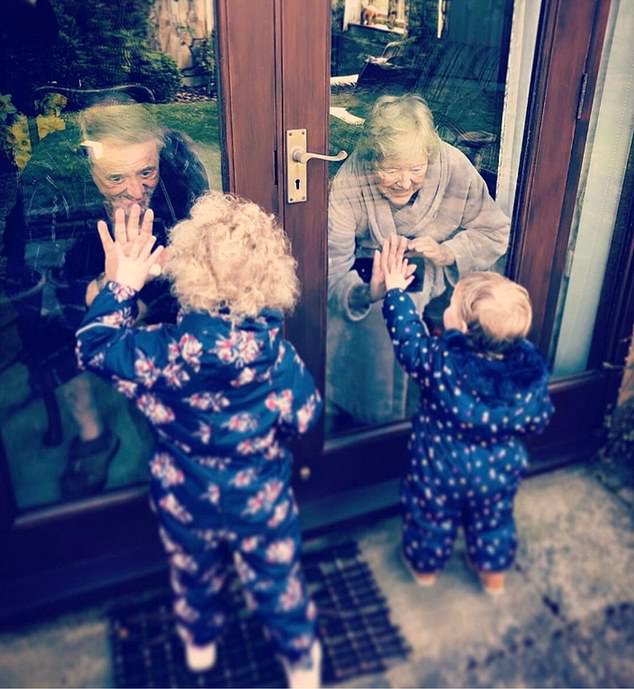 The president of the Association of Directors of Public Health has said experts are concerned ministers are lifting the coronavirus lockdown too quickly, claiming the Government’s own five tests have not been met (pictured: Two girls, aged 3 and 1, visiting their great-grandparents in Norfolk) 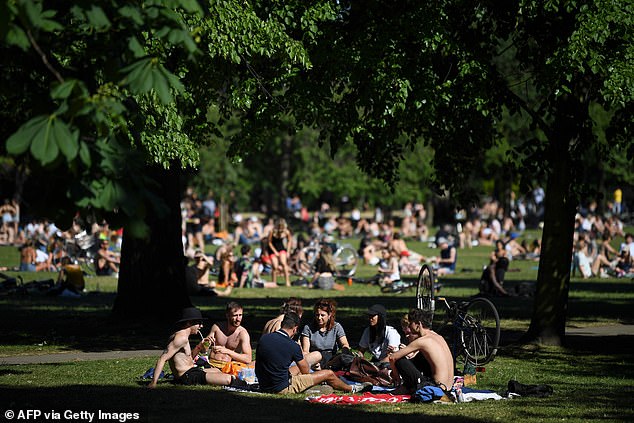 Official mobility data shows the number of people venturing out to parks has increased far above pre-lockdown levels as people look to socialise in outdoor spaces (pictured: Victoria Park, London, May 30)

She said the national testing programme and the test and trace scheme must be ‘robust and ready’, and that personal protective equipment (PPE) supply must be adequate.

‘We’re not feeling just yet that we’re confident enough to meet any potential challenge if the Government goes too quickly on easing lockdown measures,’ she added.

GPs have said ‘extreme caution’ is needed, in particular for those battling cancer and other serious long-term conditions.

It comes as official mobility data shows the number of people venturing out to parks has increased far above pre-lockdown levels as people look to socialise in outdoor spaces.

The warning also came as crowds flocked to beaches and parks in defiance of the lockdown rules that remained in force over the weekend.

They were tempted by temperatures that soared to 80F (27C) with the country enjoying the sunniest spring since records began and the driest May since 1862.