A project run by Public Health England and the University of Cambridge today predicted that 16,700 new infections are cropping up each day.

But the Office for National Statistics, which calculates a weekly measure, suggests that only 5,570 people are catching the virus on a daily basis, on average.

And an unofficial app being run by King’s College London, based on people self-reporting their symptoms, has estimated there are 9,400 new cases each day.

Over the past five days an average of 509 people have been admitted to hospital each day, and each of the new case estimates suggests a significantly different level of danger being posed by the virus.

If the ONS low estimate is right, for example, it would mean that almost one in 10 people who catch the virus (9.1 per cent) end up in hospital with it.

If PHE is correct, however, the hospitalisation rate is far lower at three per cent. King’s College’s estimate sits in the middle ground at 5.4 per cent.

Experts explained that the difference between the figures is caused by them recording different things. While the PHE and Cambridge project aims to give a nationwide picture, the ONS does not include people catching the virus inside hospitals and care homes.

The app run by King’s College, on the other hand, only counts people who get symptoms – and many don’t. All the figures should be taken with a pinch of salt and used together, scientists said.

Estimates of the number of new infections can shine a light on the true hospitalisation rate of people who get the virus – if 5,600 people are catching it each day, as in the ONS estimate, the hospitalisation rate is around 9.1 per cent, whereas if PHE’s estimate is closer to the truth with 16,700, the rate is more like three per cent 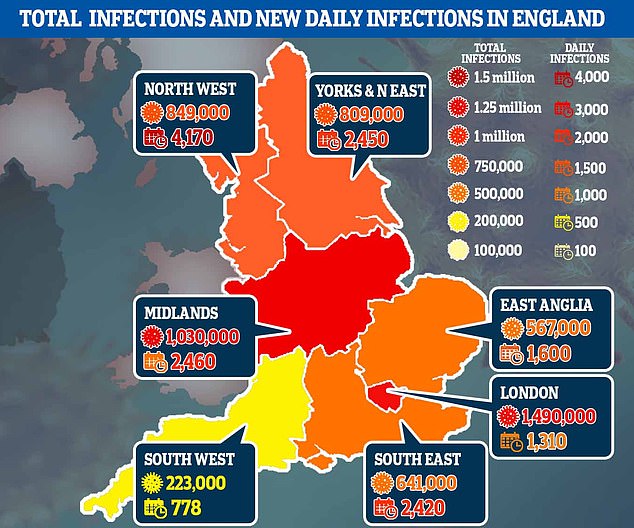 Data from Public Health England suggests that 16,700 people across the country are still contracting the coronavirus every day, with the rate of spread considerably higher in the North West

The huge disparity in the estimates means that the real level of danger posed by the virus is still unclear for the vast majority of people.

Testing figures do not show the true number of people infected because many people catch the virus but never test positive for it, either because they don’t realise they are sick, because they couldn’t get a test, or because their result was wrong.

Between Sunday and Thursday this week, for example, 1,702 people have tested positive for the coronavirus.

The 509 average daily hospitalisations in that time would suggest a massive 30 per cent of people end up in hospital, which blood testing of the population proves is untrue.

Around 4.7million people in England are thought to have had the virus already, according to Public Health England’s antibody testing data, which would mean almost 1.5million people ought to have been hospitalised if the rate is truly 30 per cent.

This is something data does not support and the NHS would have been overwhelmed if it had happened.

Therefore, the hospitalisation rate must be lower which means the overall number of people catching the virus must be higher than those who are testing positive.

The ONS’s estimate is based on swab testing samples which it has sent out to almost 20,000 people in 10,000 homes across the country. It predicts only new cases in the community, not hospital patients who people who live in institutions or homes.

This data is updated every week and showed that the number of weekly infections appears to have dropped in the past fortnight from 54,000 per week to 39,000.

Public Health England scientists, meanwhile, have been working with the University of Cambridge to produce their rolling ‘nowcast’ of the country’s current situation.

That predicts that there have been 5.62million Covid-19 infections so far in England and that there are 16,700 new cases per day across all settings.

The range for that data stretched from 10,700 per day to 25,300, meaning it did not overlap with ONS estimates even at the low end.

A separate estimate by the King’s College London team behind the COVID Symptom Tracker mobile app earlier this week said it predicts 9,400 people per day are catching the virus.

ENGLAND’S CORONAVIRUS OUTBREAK SHRINKS BY HALF

England’s coronavirus outbreak appears to have shrunk by half in the past week, official data has revealed.

The Office for National Statistics predicts that there are now only 53,000 people in England who currently have Covid-19 – 0.1 per cent of the population.

This estimate is a significant drop from the 133,000 people (0.24 per cent) who were thought to the have the illness in the same data last week. It is based on swab testing of almost 20,000 random people across the country.

The ONS report said: ‘As the proportion of those testing positive in England is decreasing over time, it is likely that the incidence rate is also decreasing.

‘However, because of the low number of new positive cases, we cannot currently measure a reduction.’

Different data from blood antibody tests, published yesterday by Public Health England, suggested that around 8.5 per cent of the country has had the virus already – some 4.76million people.

Professor Keith Neal, an epidemiologist at the University of Nottingham, said: ‘The rate of infection continues to decline and is half what it was two weeks ago. Changes over a longer period are now statistically significant.

‘This is highly compatible with the fall in diagnosed cases. The contact tracing service has more than enough staff to cope with the current level of infection.’

Those results are based on a combination of government data and people reporting their symptoms through the free-to-use public app.

The ONS and King’s College app, therefore, aim to pick up almost the exact opposite groups of people.

ONS home testing intends to get results from people who do not know they have the virus but testing them regularly, regardless of how they feel.

The number of people catching the virus is useful information because it can also shine a light on the true rates of hospitalisation among all people who get ill.

Studies have tried to calculate the proportion of people who end up in hospital after catching the coronavirus, but it is difficult because of the way people were tested in the worst days of the pandemic.

For months only people who were noticeably ill – or even already in hospital – got tested. This meant that the mild infections suffered by most people simply went uncounted. 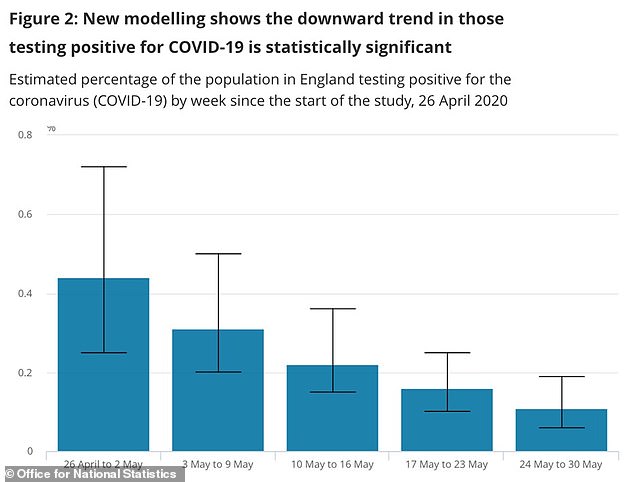 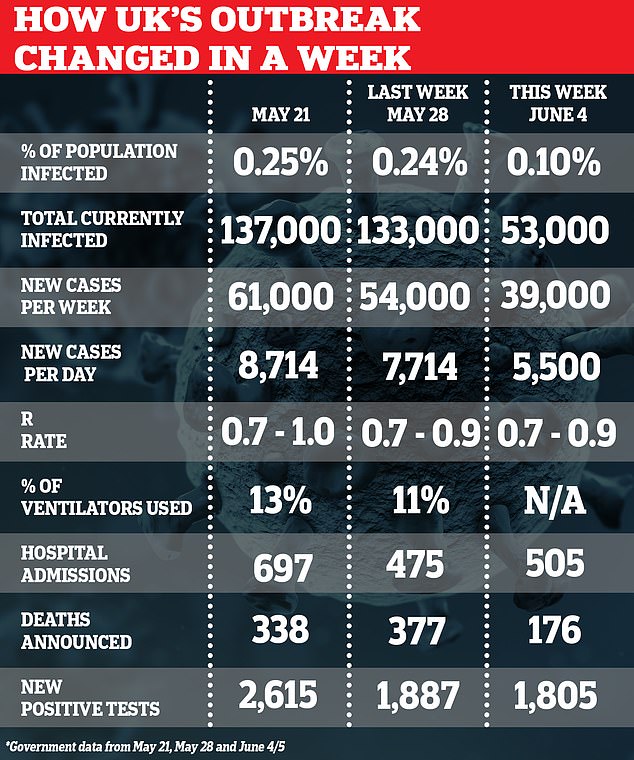 A report from the European Centre for Disease Prevention and Control (ECDC), published on April 8, suggested that 32 per cent of people officially diagnosed with Covid-19 ended up in hospital.

More severely ill people are more likely to be tested, however, while those with only mild illnesses slip through the net.

In China, the hospitalisation rate has appeared to be around 10 per cent, the ECDC report said.