An interactive map that breaks down new coronavirus cases by postcode has revealed a neighbourhood near a university in Bradford was the worst-hit part of England last week.

Public Health England figures show that Shearbridge, in the south west of the city in West Yorkshire, recorded 32 cases in the week that ended July 26.

The statistics are used to help health chiefs target specific areas of the country with tough coronavirus-controlling measures, rather than using another blanket lockdown on the entire nation.

After Shearbridge — the home of the University of Bradford campus, the next four worst-hit areas of England were all also in the north of England.

Bastwell in Blackburn saw 23 cases in the space of a week, while Alexandra Park in Oldham had 22. Waddleworth and Newbold Brow in Rochdale had 21, while Pellon East in Halifax saw 20.

There were also spikes seen across Leicester, despite the city being under stricter rules than the rest of England for nearly a month. Belgrave North West recorded 19 new cases, while Highfields South saw 16, Spinning Hill Road 18, Crown Hills 15 and North Evington and Rowlatts Hill 14.

Health Secretary Matt Hancock has said there are still far too many cases in Leicester for restrictions to be lifted, meaning the city’s 330,000 residents must still avoid non-essential travel out of the area, stick rigorously to social distancing rules and not enter other people’s homes.

It comes as a major incident was declared by authorities in Greater Manchester this week following a rise in the number of coronavirus infections.

New measures affecting 4.5million in the region, as well as people in parts of Lancashire and Yorkshire, forbid people from different households from meeting each other inside their homes or in gardens, while also banning separate households from mixing in pubs, restaurants and other hospitality venues.

Bradford East MP Imran Hussain last month warned of a ‘clear link’ between poverty and a spike in cases. One in three households in Shearbridge are thought to live in poverty.

Public health professionals across each region will now be given positive test data and contact tracing figures every day.

Coronavirus cases jumped again today in Britain as official statistics show the average daily number of infections has topped 800 for the first time in a month.

Department of Health chiefs confirmed another 670 Britons had tested positive for the life-threatening disease — down from yesterday’s six-week high of 938. But the rolling seven-day average now stands at 802 and has been on the rise since it fell to a four-month low of 546 on July 8.

But official data shows Covid-19 deaths in England and Wales are at their lowest point since before lockdown.

There were 217 Covid-19 deaths registered across the two nations in the week ending July 24 — 2.4 per cent of all deaths in that time period.

This is a 26.4 per cent fall from the previous week, when there were 295 deaths where coronavirus was mentioned on the death certificate.

The last time deaths involving coronavirus were so low was in the week ending March 20, before lockdown, when there were 103 deaths. For comparison, more than 1,000 people died every day in the UK for 22 consecutive days during the height of the crisis in April.

However, due to the roughly three-week time period it takes for a patient to fall seriously ill and pass away, deaths might not trickle into the data for several weeks yet. Figures also show only 100 patients are still being hospitalised each day, a rate which has barely changed over the past fortnight.

There were 217 deaths registered in the week ending July 24 involving Covid-19 – accounting for 2.4 per cent of all deaths 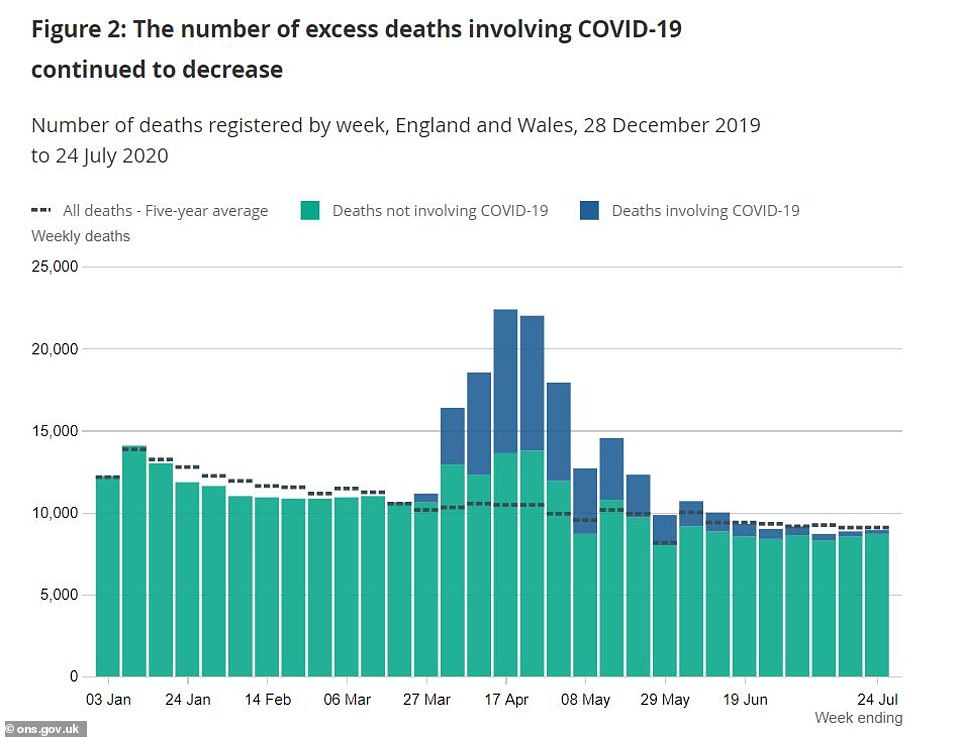 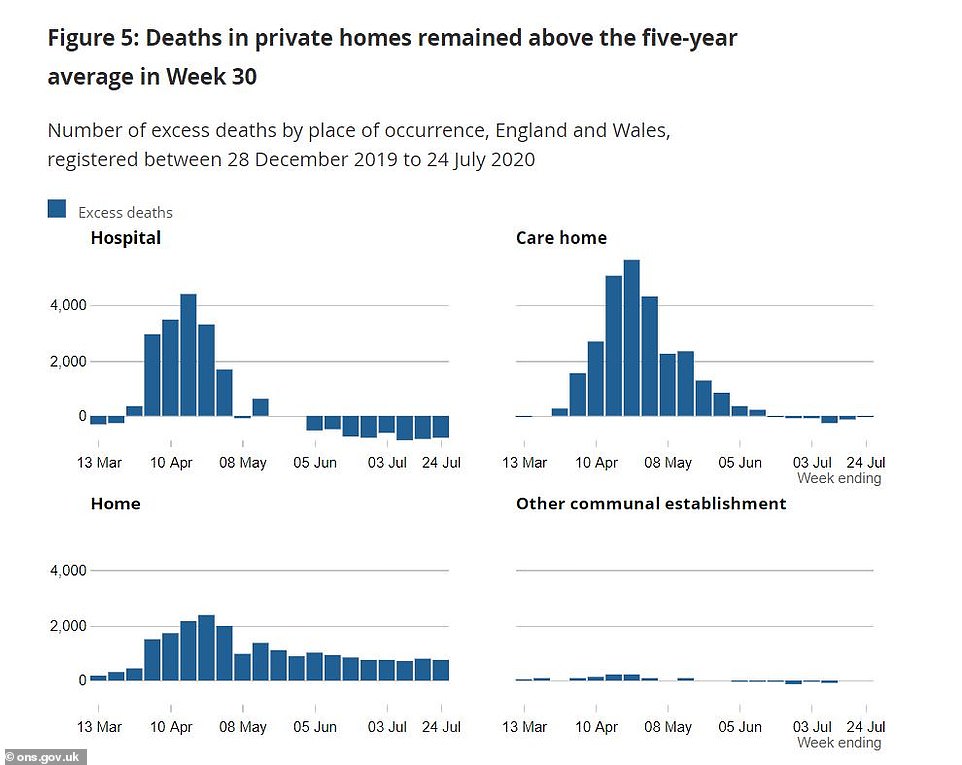 Separate data showed the number of Covid-19 fatalities decreased across all English regions, except for Yorkshire and the Humber and the East Midlands.

All regions, except for the North East, East Midlands and West Midlands, had fewer overall deaths than the five-year average.

Tuesday’s ONS figures show that 51,596 deaths involving Covid-19 had occurred in England and Wales up to July 24, and had been registered by August 1.

Equivalent figures for Scotland registered up to July 26 and Northern Ireland up to July 29 take the total to 56,651.

These are deaths registered in the UK where Covid-19 was mentioned on the death certificate, including suspected cases.

It emerged last month that PHE has been classing people as Covid-19 victims if they died of any cause any time after testing positive for Covid-19 – even if they were hit by a bus months after beating the life-threatening infection.

The statistical flaw was uncovered by Professor Heneghan and Dr Yoon Loke, from the University of East Anglia, who believe more than a thousand people have had their deaths wrongly attributed to the disease.

Health Secretary Matt Hancock announced a fortnight ago that an ‘urgent’ review was being carried out into how the Government agency was counting deaths.

Professor Heneghan said: ‘These deaths [ONS’] do not match the Public Health England data, which reported 442 deaths in England alone for the week to the 24th of July. Given the inaccuracies in the PHE data set it should be discontinued.’

Ministers today admitted the struggling coronavirus contact tracing system must improve – but insisted schools will reopen in September despite fears of a catastrophic second peak.

Local government minister Simon Clarke conceded there is ‘more to do’ after a major study warned a resurgence of the disease could be twice as bad as that in the Spring.

Scientists said the only way of bringing back schools and avoiding another crisis around Christmas was to ramp up dramatically the NHS test and trace operation.

To prevent a second wave when schools reopen, the NHS contact tracing system must reach 68 per cent of cases and their contacts, according to researchers from University College London and the London School of Hygiene and Tropical Medicine.

But the current NHS system is ‘not good enough’ as it reaches just half of contacts and only a fraction of symptomatic cases are tested.

The dire picture came as WHO expert David Nabarro cautioned that the virus is not ‘going away’, and it would return with a vengeance if people get ‘bored’ and stop obeying lockdown rules.

Meanwhile, former PM Tony Blair has called for a fresh push on mass testing, dismissing the idea of relying herd immunity or completely eradicating the disease. He said unless people without symptoms were routinely screened most of cases would continue to be missed.

However, in a round of interviews today Mr Clarke insisted that the reopening of schools in September was ‘not up for debate’ and will definitely go ahead. While stressing that the test and trace system was ‘delivering’, he said: ‘There’s always more to be done, we’re very honest about the fact this is a challenge.

‘There’s a massive role here for the public in helping us with this process, because in the end it is up to all of us to do the right thing.’

He added: ‘One thing is clear, schools are going to reopen in full in the autumn, that is not up for debate.’