Coronavirus: Excess deaths in private homes soar to 30,000 in England and Wales

The number of people dying in private homes has surged to more than 30,000 above the yearly average this year, official data shows as the coronavirus pandemic drove people away from hospitals.

Far more people than normal have died behind closed doors at home this year because of the outbreak of Covid-19 which, as well as killing tens of thousands of people, saw many more turfed out of hospitals to make room.

The total number of people to have died at home has now hit 109,893 between March 7 and October 30, which is 31,684 more than normal for the same time of year, an Office for National Statistics report showed.

Only 2,676 of the excess deaths were known to have been caused by Covid-19, meaning the remaining 92 per cent were of other diseases, some of which may have been treatable if health services were running normally.

Experts say it’s not clear whether the excess home deaths are all a bad thing – many terminally ill people may choose to die at home rather than in hospital, but others may have missed out on pain relief or quality end-of-life care.

The same report today showed that the number of people dying from Covid-19 each week in England and Wales rose above 1,000 in the last week of October for the first time since June.

The ONS said the virus was mentioned on 1,379 death certificates in the seven-day spell that ended October 30 — 41 per cent up on the 978 deaths recorded in the previous week. It is the first time the four-figure threshold has been crossed since the first full week of June.

While the numbers of people dying of all causes in hospitals and care homes fell back to normal levels after the first wave of the epidemic, they have stayed considerably higher than average in private homes all year 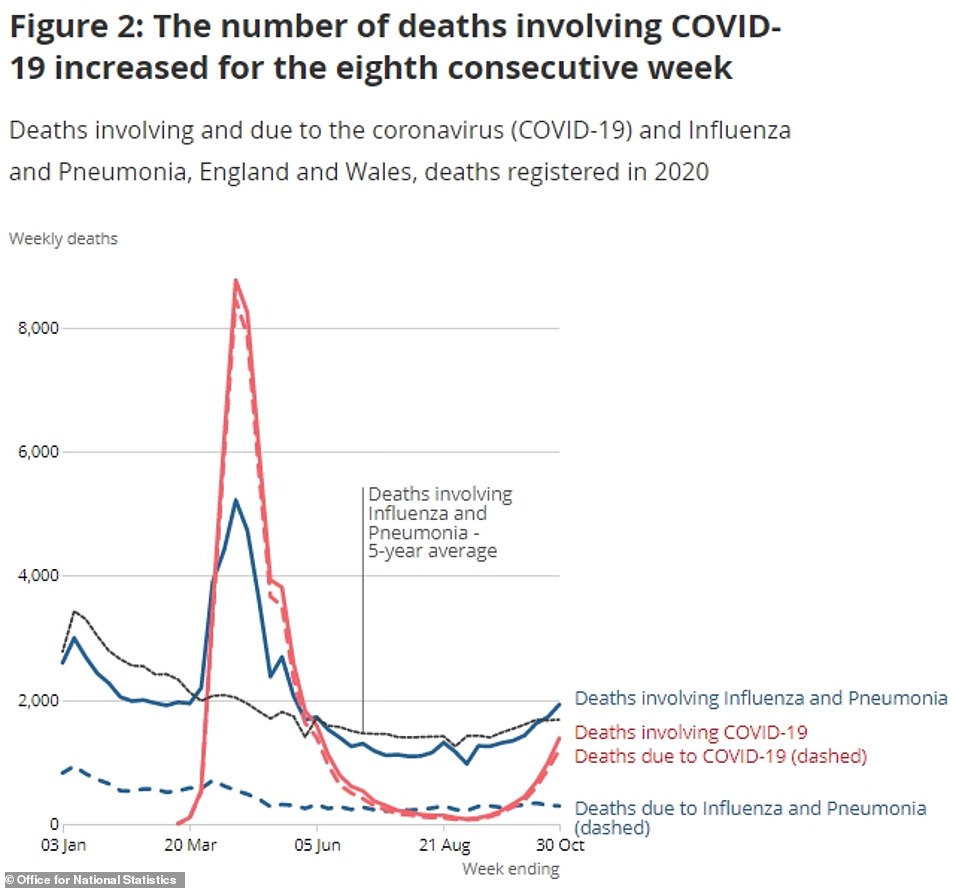 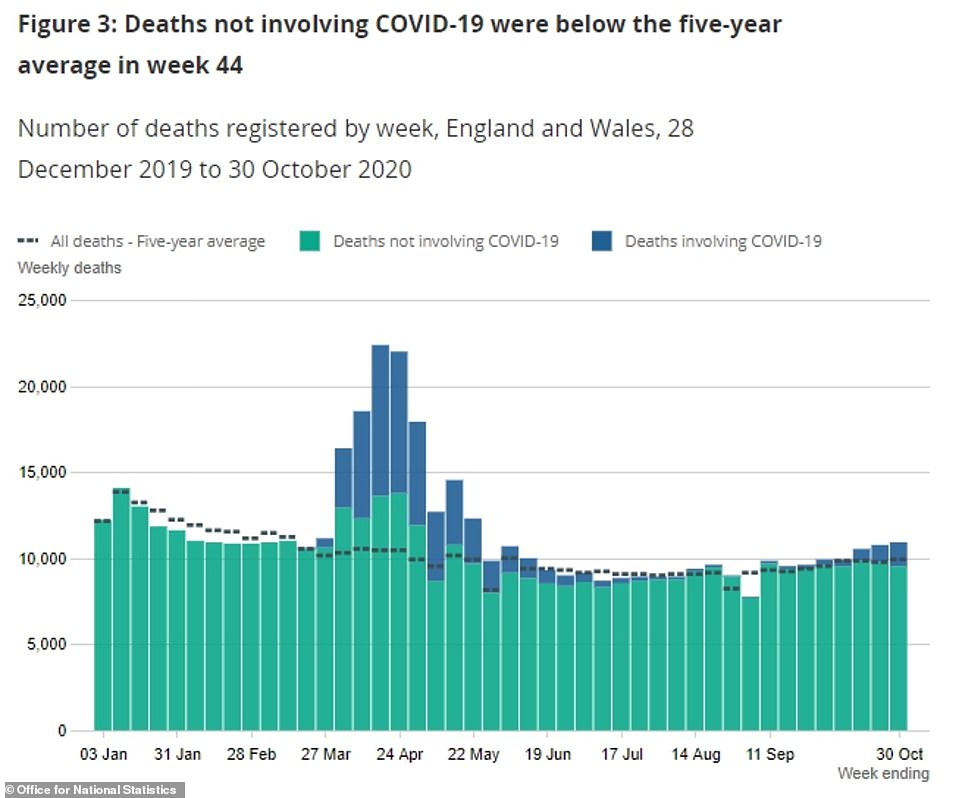 LONDON WAS THE ONLY REGION TO SEE DEATHS FALL BELOW AVERAGE

London was the only region in England and Wales to see deaths fall below average for this time of year, according to the Office for National Statistics.

In the final week of October the capital’s deaths dropped 4.3 per cent below average, falling to 888 compared to the five-year average of 928.

In the previous week its deaths were 2.2 per cent above average, at 922 compared to the 902 expected at this time of year.

The North West suffered the biggest surge in deaths, which were 31.4 per cent above average.

Officials counted 1,754 deaths from all causes in the last week of October, compared to the five-year average of 1,335.

The second biggest surge was recorded in Yorkshire and the Humber, where cases were 18.5 per cent above average at 1,168 compared to the five-year average of 986.

Statisticians say the surge in people dying at home represents a ‘redistribution’, arguing many ill patients would have been reluctant to go to hospital out of fear of catching Covid-19 or suffered disruptions to their usual NHS treatment because of the draconian lockdown.

Heart disease was the biggest cause of the deaths, followed by cancers and dementia – it is normal for these to be the main killers.

Experts are not sure whether the statistics are necessarily bad – many people choose to die at home rather than in hospital – but warn people might have missed out on proper end-of-life care, which includes painkillers, and that some of the people may actually have been saved if they were in a hospital.

‘Usually around 300 people die each day in their homes in England and Wales,’ Cambridge University statistician Professor David Spiegelhalter said in October.

‘The latest ONS analysis confirms that even after the peak of the epidemic this has stayed at around 400 a day and shows no sign of declining – that’s one-third extra, very few of which are from Covid.

‘Non-Covid deaths in hospital have correspondingly declined, suggesting most of these deaths would normally have occurred in hospital, and people have either been reluctant to go, discouraged from attending, or the services have been disrupted.

‘It is unclear how many of these lives could have been extended had they gone to hospital, for example among the… extra deaths from cardiac arrhythmias (abnormal heartbeats).

‘Crucially, the ONS data cannot tell us about the quality of these deaths, particularly in terms of the end-of-life care provided to the patients and the support for their families.’

Deaths in hospitals also rose above the average (at 244) but those in care homes and other locations were below average for the time of year.

This week’s report, which showed deaths are continuing to rise as a result of the country’s second wave of coronavirus, found that 86 per cent of all deaths in the last week of October had the virus registered as the underlying cause, meaning around 170 people per day died directly from Covid-19 in the week before lockdown 2.0, on average.

For reference, dementia — the biggest killer in England and Wales — kills the equivalent of 150 people every day.

The report also revealed that excess deaths remained only 10 per cent above the five-year average, at 996 above the expected with 10,887 recorded fatalities. In the worst days of the outbreak in April, excess deaths hit 11,000 per week.

Excess deaths are considered the most accurate way of measuring the impact of the Covid-19 pandemic because they include people who have died with the virus without testing positive, as well as those who die of other causes as an indirect result of the outbreak.

ONS data revealed that fatalities where Covid-19 was mentioned on the death certificate in England and Wales more than quadrupled in October, after they rose above 1,300 from 321 at the beginning of the month.

Deaths are expected to continue to rise for several more weeks because of an earlier spike in infections recorded throughout the two nations.

The total number of deaths recorded in England and Wales reached 10,887 in the last week of October, a rise of one per cent compared to the previous week’s 10,739 fatalities.

The number of fatalities involving the coronavirus was still below those involving pneumonia and flu, with the two common diseases linked to 1,922 deaths.

But only 15 per cent of these deaths had the infections named as the underlying cause — the factor that led to the person’s death, compared to 85 per cent of all the Covid-19 linked deaths. 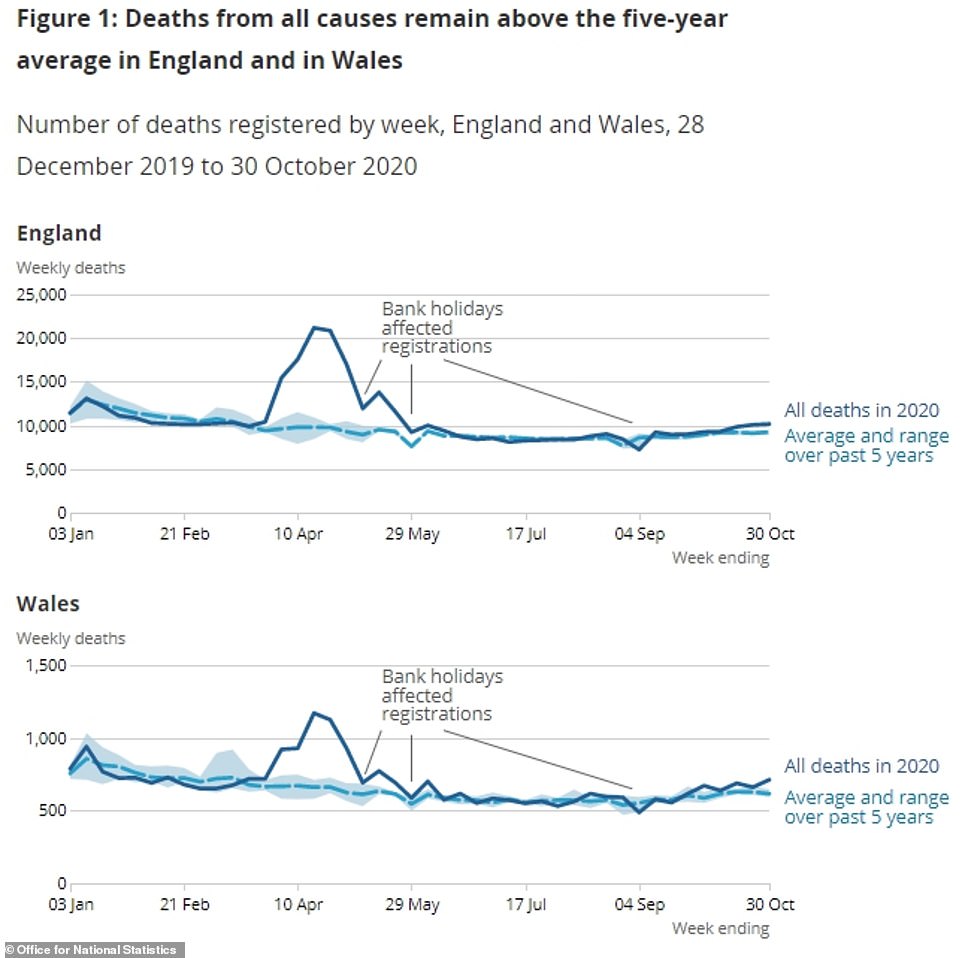 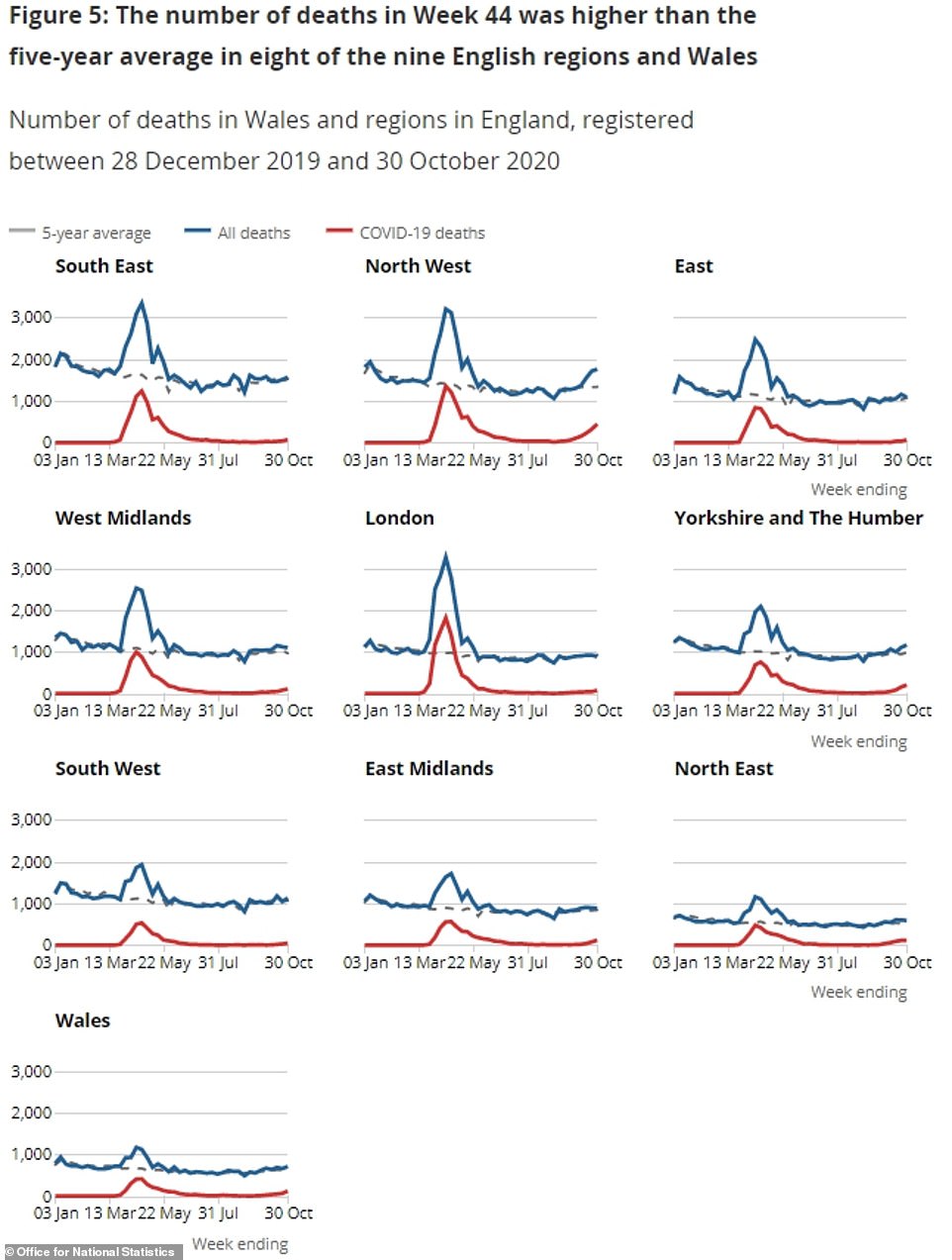 Those aged between 85 and 89 saw the biggest increase in fatalities in the last week of October, with 93 more deaths recorded.

They also suffered the largest number of deaths where the virus was mentioned on the death certificate, at 281.

The second highest number was recorded in those aged between 80 and 84 and those over 90, as both age groups each recorded 259 deaths from the virus.

There were no fatalities in people under the age of 24 for the second week in a row.

The ONS figures are considered to be more accurate than those released by the Department of Health every day, as they also include people thought to have died from the virus but never received a test to confirm the diagnosis.

At the height of the first wave, officials were unable to test enough people meaning they relied heavily on ONS numbers to establish the actual death toll in the country.

Each death is also confirmed with a death certificate, meaning there is no risk of duplication of figures.

The figures will continue to climb following the imposition of a second national lockdown in England as it will take time to drive down the total number of new infections.