Coronavirus: Experts find variant from Tanzania that ‘has more mutations than any known strain’

A Covid variant thought to carry more mutations than any other strain has been found in Tanzania, according to researchers.

Virologists said it looked further removed from the original Wuhan virus than any other strain known to science, including variants found in Kent, South Africa and India.

It was first picked up in three travellers who got tested at an airport in Angola after flying there from Tanzania in mid-February.

Researchers examined samples in a laboratory and found the virus had 34 changes, 14 of which were on the ‘spike’ protein that it uses to latch onto human cells and cause illness.

For comparison, the Kent variant has 17 significant genetic changes with eight on the spike. The South African strain has even fewer.

Professor Tulio de Oliveira, who discovered the variant, said: ‘When compared with other variants of concern and variants of interest, this is the most divergent one.’

He described the strain, known as A.VOI.V2 as ‘the most diverse A lineage ever described’. An A lineage is a direct descendent of the original Wuhan strain of the virus.

This comparison doesn’t include the Kent and South African variants, however, which are B lineages – ones that trace back to a different strain that became dominant in Europe last summer.

Not enough is known about the Tanzanian variant for scientists to decide whether it is any more dangerous than existing ones.

And it’s impossible to know how widespread it is because not enough testing and genetic sampling is done in sub-Saharan Africa.

Professor Tulio de Oliveira said A.VOI.V2 was ‘potentially of interest’ simply because of how many mutations it has.

Professor de Oliveira and colleagues’ paper showed that the variant they found in Tanzania, named A.VOI.V2 (far right) had significantly more mutations than other strains including the Kent one (B.1.1.7) and South African (501Y.V2) 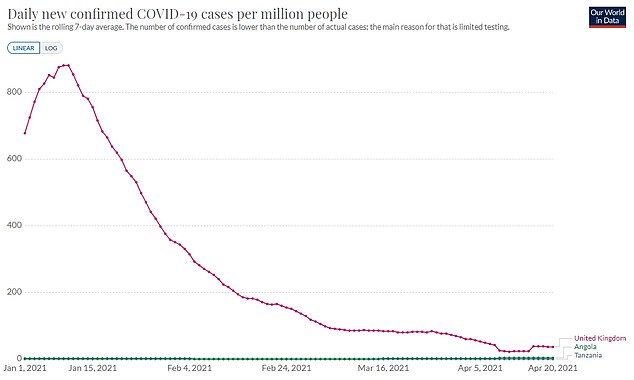 Professor de Oliveira published his discovery alongside colleagues at the University of KwaZulu-Natal in Durban, South Africa; the Angola Ministry of Health; the Africa Centres for Disease Control and Prevention; and universities in Rio de Janeiro, Oxford and Cape Town.

Professor de Oliveira said on Twitter: ‘It the most diverse A lineage sequencers ever described.

‘It also [worried] us as it was found in three travelers from Tanzania in Angola. There is almost no data from Covid in Tanzania.

‘When compared with other variants of concern and variants of interest, this is the most divergent one.’

Graphs published in the paper only compared it to five other major variants and suggested some samples of those had contained more mutations than the Tanzania strain. Not every sample is identical and some have extra mutations that come and go because the virus is constantly changing and not every change sticks around.

The reason a large number of mutations is concerning for scientists is that it raises the risk of immunity from a vaccine or past infection not working as well.

Immune system antibodies, which destroy the virus when it gets into the body, are specific and work less well against viruses they haven’t seen before.

INDIAN VARIANT SPOTTED DOZENS OF TIMES IN THE UK

India’s troublesome Covid variant has been spotted more than 200 times in Britain, MailOnline can reveal.

The most up-to-date data from the Government’s official coronavirus variant tracking programme shows 103 infected people have had the mutant strain.

But separate figures published by the same group of experts show the B.1.617 variant has actually been spotted 215 times – with it making up around one in every 200 positive swabs that are analysed.

Scientists said it was a ‘very troubling’ number and that it was proof the variant was spreading, with 85 per cent of samples detected in the past month.

However, health chiefs say some of the cases will be duplicates because the majority are linked to foreign travel.

Everyone flying in to England from India – and anywhere abroad – currently has to take two Covid tests while quarantining at home for 10 days. British experts are currently managing to sequence the majority of positive tests because cases are so low.

Scientists and senior Labour politicians slammed the Government for allowing thousands of travellers from India to pour into the UK every week despite knowing about the variant for nearly a month.

Number 10 only announced India was being added to the UK’s travel ‘red list’ yesterday, and the measures don’t start until 4am on Friday.

The data, published by the Covid-19 Genomics UK Consortium, shows the Indian variant has been spotted in every part of the UK except Northern Ireland — with 198 samples in England, 10 in Scotland and seven in Wales.

Professor Paul Hunter, from the University of East Anglia, said it was ‘almost certain’ that there are more cases of the Indian variant because it can take two or three weeks for sequences to be analysed and published.

It is feared B.1.617 spreads easier than older strains and has mutations which help it evade vaccines — but to what degree remains unclear. Scientists do not believe it is any deadlier than the strains currently circulating in Britain.

This is why Britain is preparing a booster vaccine campaign this autumn so people can get extra protection specifically against the South Africa variant, which is mutated from the one the original vaccines were based on. The current jabs are expected to work but may be less effective than they are against the Kent strain.

More people who have been vaccinated, therefore, might be able to get reinfected or become sick even after their jab if new variants become dominant in future.

In their paper – which was published as a pre-print and not reviewed by independent scientists – Professor de Oliveira and colleagues said that some of the mutations on the Tanzania variant were the same as those on other strains.

One called E484K, for example, is found on the South African and Brazilian P1 variants, and is thought to help the virus to slip past immunity from current vaccines. Others had not been seen before.

Thirty-one of the mutations happened in a way that meant an amino acid – a building block – in its genetic sequence had been swapped out for another one. These are called substitutions. And in the remaining three mutations that amino acid just disappeared completely – a deletion.

In the paper, the researchers suggested the Tanzania variant may have ‘resistance to neutralizing antibodies and potentially increased transmissibility’.

The team wrote: ‘Whilst we have only detected three cases with this new variant of interest, this warrants urgent investigation as the source country has a largely undocumented epidemic and few public health measures in place to prevent spread within and out of the country.’

The true size of Tanzania’s outbreak is unknown but the World Health Organization has recorded 24,518 confirmed cases and 563 deaths there.

Both Tanzania and Angola are on the UK’s travel red list, meaning that no visitors from those countries are allowed into Britain. Only UK citizens or residents can travel in and they must quarantine in a hotel for at least 10 days and get tested regularly.

The most recent variant to rattle politicians and scientists in the UK is a strain first found in India, which has been spotted in more than 200 positive test swabs.

Number 10 only announced India was being added to the UK’s travel ‘red list’ yesterday, and the measures don’t start until 4am on Friday.

At least 5,000 of people are due to arrive in Britain from India before the travel restrictions come into effect, as a desperate scramble to beat the quarantine deadline ensues.

Amid growing numbers of the variant at home and the spiralling epidemic in India, the Prime Minister has had to cancel a scheduled visit to Delhi next week.

Reacting to the new Indian variant cases, Professor Paul Hunter, an epidemiologist from the University of East Anglia, added: ‘It does look like this is growing rather more quickly than it should be while we’re in this sort of lockdown.

‘It is still a little bit early to know what’s really going on with this variant, but the signs are not looking good.’