A group of men have been hit with whopping fines after they broke coronavirus restrictions – by playing a game of cricket.

The five men were captured on film being stopped by two Victoria Police officers in footage shared to social media on Monday.

They were ‘fined $1,652 each for not abiding by the new lockdown laws’ and ‘having a game of backyard cricket’, according to the post.

The video, filmed in Melbourne, showed a man holding a cricket bat as two of his friends were spoken to by police.

A set of stumps could be seen in the background as officers wrote out infringement notices.

Pictured: Video footage appeared to show a group of men receive fines for playing a game of cricket

Victoria Police told Daily Mail Australia it would not comment on individual fines.

The incident has divided opinion on social media.

‘Wow, that’s over the top! They just want revenue,’ one person wrote.

‘Bit harsh… I’d love to know how many of the backpackers got fined for that house party the other week!’ wrote another. 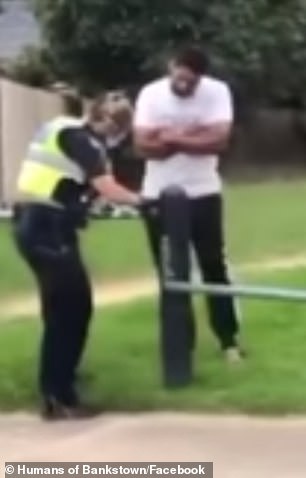 Other viewers questioned whether the strict measures were clear.

‘Isn’t that exercise though?’ one questioned.

Another said: ‘Everyone was saying lock us down weeks ago and now everyone’s complaining that people are playing sport with their friends or neighbours?

‘Can’t have it both ways. We need to stop the spread.’

The incident comes amid confusing enforcement of coronavirus restrictions around the country.

Thousands of beachgoers have been allowed to break social distancing rules while others have been penalised for taking a breather on a park bench while staying more than 1.5 metres apart.

Victorians are only meant to leave their homes to get food, to exercise, for medical care or care-giving and for work or education.

Police have continued to crack down on people flouting the rules in Victoria, conducting 983 spot checks in the 24 hours to 8am on Monday and issuing 108 fines.

Rule-breakers can be fined $1,652 if they leave home for non-essential reasons and businesses face a $9,913 fine if caught breaching the restrictions.

Hunter Reynolds, 17, was learning to drive in wet conditions with her mother as the passenger when a police officer pulled them over on the weekend.

The pair had travelled about 30 kilometres from their Hampton home to Frankston. 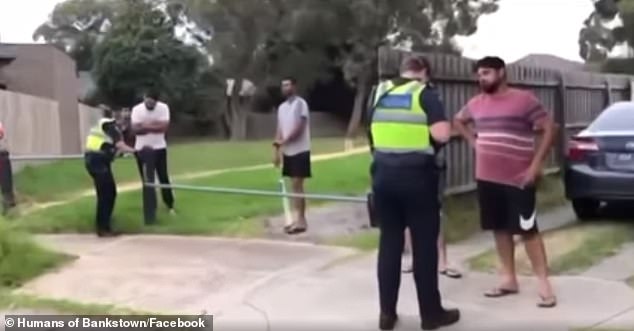 A man was seen clutching onto a bat (centre) as two of his friends were spoken to by police, who appeared to write out the infringements 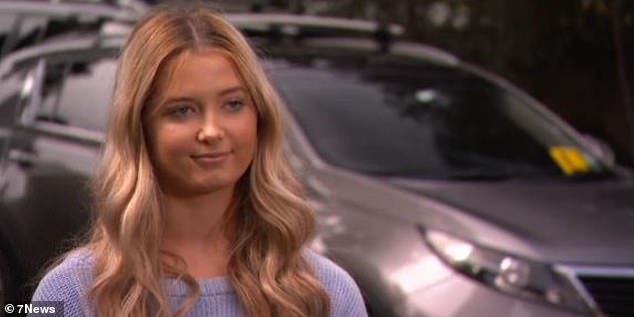 Hunter Reynolds (pictured), 17, was learning to drive with her mother in Frankston, Victoria on Sunday when a policewoman pulled them over

‘We didn’t think for one minute that we would be doing anything wrong,’ Sharee Reynolds told 3AW on Monday.

‘We weren’t in contact with any person, we weren’t stopping anywhere, we weren’t planning on visiting any destinations, we were just learning to drive in those conditions.

‘She (the officer) said we were too far from home and we would cop a fine, and that Hunter would be the person to receive that fine.’

The teenager has been given a $1,652 on-the-spot fine for breaching the stage three restrictions, but the pair plan to challenge it in court.

Meanwhile, NSW police are enforcing self-isolation regulations, with 98 infringement notices issued across the state since March 17.

There are 5,795 cases of coronavirus across Australia, with 41 deaths.

The state has also brought in the two-person limit inside and outside the home – not counting pre-exisitng members of the household.

Mother of schoolgirl, 17, fined $1,652 for taking a DRIVING LESSON lashes out at police for ‘ridiculous’ enforcement of coronavirus rules

The mother of a schoolgirl who was fined $1,652 for taking a driving lesson has lashed out at police.

Hunter Reynolds was learning to drive in wet conditions with her mother Sharee in Frankston in Victoria on Sunday when a policewoman pulled them over.

The officer told the 17-year-old she was breaking the stage-three coronavirus restriction rules and slapped her with a huge fine.

Her mother has vowed to contest the fine, calling it ‘ridiculous’.

‘Common sense did not prevail,’ Ms Reynolds told The Herald Sun. ‘I didn’t for one moment think we were breaking the rules. We live together, we didn’t leave the car or stop.’ 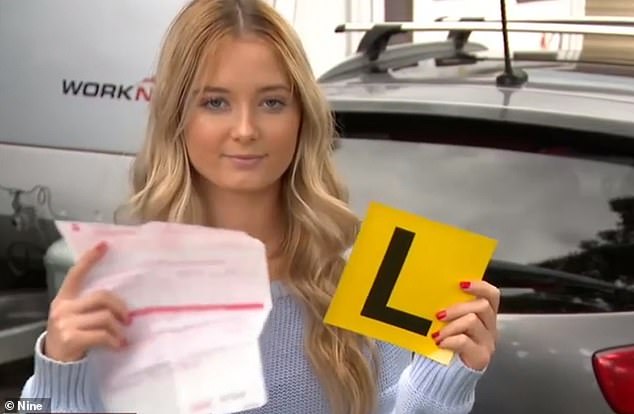 Hunter Reynolds was fined $1,652 for taking a driving lesson with her mother during coronavirus restrictions 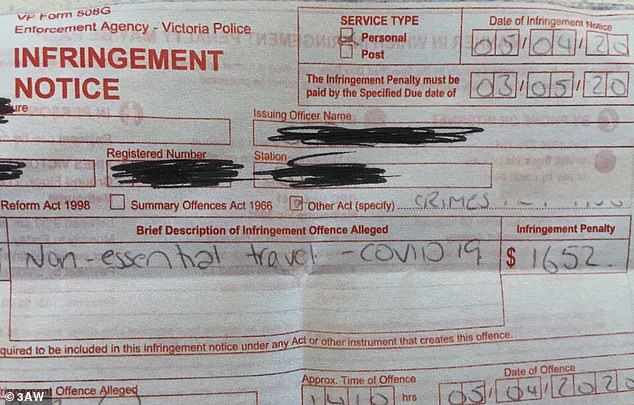 The infringement comes amid confusing enforcement of coronavirus restrictions around the country, which have seen thousands of beachgoers allowed to break social distancing rules while others have been penalised for taking a breather on a park bench while staying more than 1.5 metres apart.

Since last Monday, residents in NSW, Victoria, Queensland, Tasmania and the ACT have been banned from leaving home except for food and supplies, medical care, exercise, and work or education.

‘We didn’t think for one minute that we would be doing anything wrong,’ she told 3AW on Monday.

‘We weren’t in contact with any person, we weren’t stopping anywhere, we weren’t planning on visiting any destinations, we were just learning to drive in those conditions.

‘She (the officer) said we were too far from home and we would cop a fine, and that Hunter would be the person to receive that fine.’

The Kilbreda College year 12 student said she was stressing when police pulled her over.

‘I was just shocked, because I obviously hadn’t done anything wrong, or so I thought. I was just really stressing,’ she said.

The officer told them they had been ‘smashing it on the roads today’.

Deputy Commissioner Shane Patton said there was a possibility the fine would be reversed.

‘It’s quite possible it will be withdrawn because the public is now aware they can’t be doing that activity, unless of course it’s mixed in with driving to the shops where you are exempt to go and buy food, those sort of things,’ he said.

Mr Patton said a decision on whether to withdraw the fine would include an assessment of all circumstances.

Australian Lawyers Alliance spokesman Greg Barns said fines should be saved for serious offenders or risk clogging the justice system with challengers of their offences.

‘If police are going to issue large numbers of fines they can expect many will be challenged and clog up an already desperately over loaded and delayed Victorian court system,’ he said.

‘Fines should only be used for serial noncompliance.’ 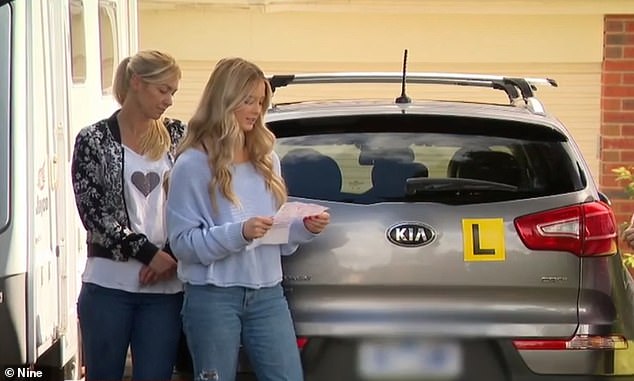