Beachgoers soaked up the sun in roped-off social distancing zones in France today in the latest sign of what a summer in the age of coronavirus will look like.

Sunbathers were enjoying 79F (26C) sunshine in La Grande Motte today where visitors can reserve a three-and-a-half-hour slot at the seaside.

The 66 pleasure spots were booked up within two hours when they first went on offer with people keen to return to the beach after a two-month lockdown.

Visitors are allowed to swim in the sea, but authorities have imposed a one-way system to stop people crossing each other’s paths as much as possible.

A sunbather lies on her towel at a beach in La Grande Motte in the south of France today, after local authorities set up social distancing spots on the seaside 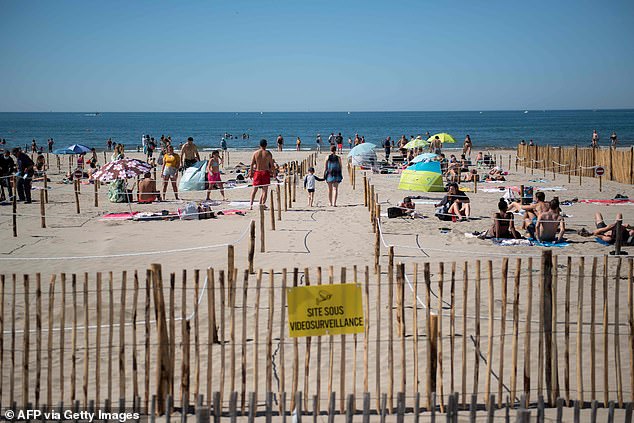 The beach spots for two, four or six people are marked out by tape and arranged so that people will come into contact as little as possible.

The system has been introduced on an ‘experimental basis’ and will operate until at least June 2.

A local official told French media that they got the idea from Spain after hearing  about a similar scheme there.

‘We do not pretend to have found the perfect solution for beach lovers, but merely to test a model which allows you to put down your towel for sunbathing with maximum health protection,’ the booking website says.

Beachgoers must show their booking when they arrive at the seaside and observe distancing rules once they are allowed in.

Animals are not allowed, smoking is banned and people are only allowed to listen to music through their headphones.

La Grande Motte is in one of the low-infection regions of France, so-called green zones, where people have been allowed back to the beach since Monday. 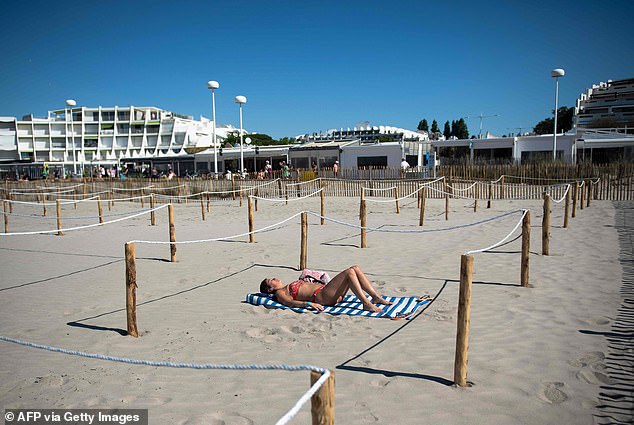 The spots are marked out for sunbathers who can book them for two, four or six people and stay for a maximum of three hours 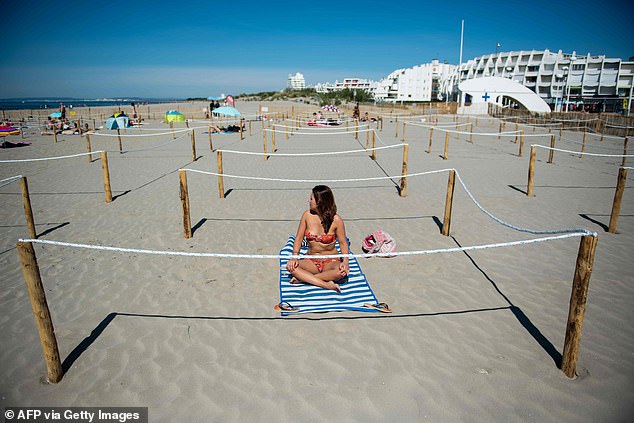 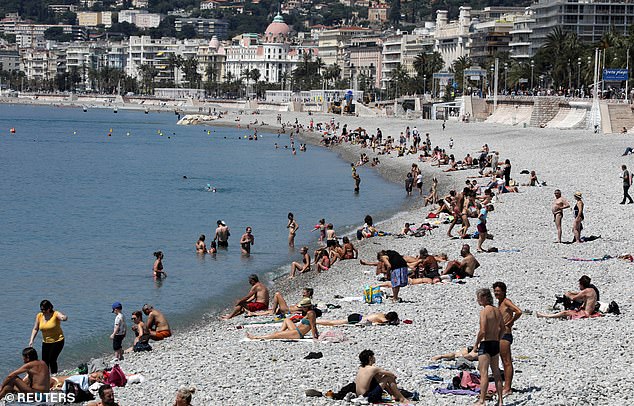 Sunbathers at a different beach in Nice today, after people were allowed to return to the seaside from Monday following France’s virus lockdown

Individual activities such as swimming, fishing or surfing are generally allowed, but team sports are not.

Interior minister Christophe Castaner went to Veules-Les- Roses beach in the northern region of Normandy to check on the situation.

‘The virus is still around. We must learn to live with it. You can go fishing but not linger on the beach for hours,’ he said – although La Grande Motte’s reserved spots are a way around this.

‘If the rules are not respected, we will reverse our decisions’ to re-open some beaches, he warned.

Three towns in the north-west have already had to close their beaches after saying too many people were snubbing social distancing rules.

The easing of France’s eight-week lockdown, one of the strictest in Europe, started on May 11, allowing non-essential shops, factories and other businesses to re-open.

The country is split into ‘green zones’ where the infection rate is low and ‘red zones’, including the greater Paris region, where the rate is higher.

Theatres, restaurants and bars remain closed across the country until at least June.