Coronavirus Germany: Plans for ‘lockdown light’ amid surge in infections

Angela Merkel is drawing up plans for a so-called ‘lockdown light’ in which bars and restaurants would shut but most schools would stay open, German media says.

Merkel is due to hold talks with regional leaders on Wednesday amid rapidly rising coronavirus infections in Germany, with her economy minister warning that cases could soon reach 20,000 per day.

According to Bild, the ‘lockdown light’ would see schools and kindergartens remain open except in areas with particularly high infection numbers, unlike in the spring when they were shut down across the country.

Events would be banned and bars and restaurants would shut down entirely, but some shops would be allowed to remain open under certain conditions.

Infections have surged to an average of 10,900 a day in Germany with one government minister warning that daily cases could soon exceed 20,000 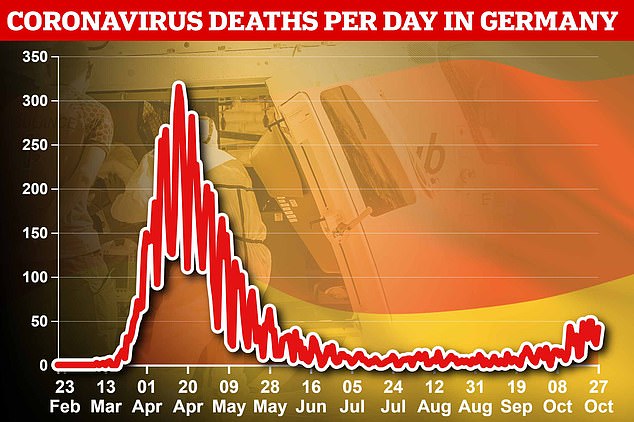 Average daily deaths are now up to 37 after slowing to a trickle over the summer, but are growing more slowly than in France, Italy or Spain

Merkel’s talks with Germany’s 16 state premiers have been brought forward to Wednesday with cases continuing to rise.

Under Germany’s federal system, individual states have the final say on which restrictions to impose, and some less-affected regions are likely to bristle at measures that will inflict more economic pain.

‘Better faster and stricter than delayed and extended,’ he said after a state cabinet meeting.

Soeder, seen as a possible successor to Merkel, added that the priority would be to keep schools and kindergartens open for as long as possible.

Several cities across Germany have already taken the drastic step of cancelling their Christmas markets this year, including the Nuremberg market that usually attracts over two million visitors.

Cologne mayor Henriette Reker said alcohol consumption would be banned on the city’s streets on November 11, the day that normally kicks off its carnival celebrations.

‘We’re not partying this time,’ she said. 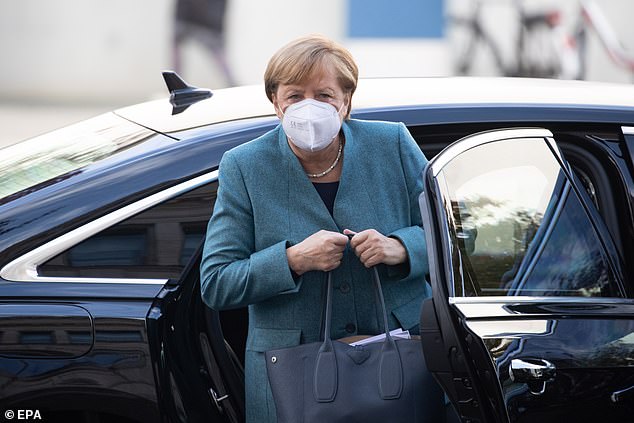 Angela Merkel, pictured arriving for a party meeting in Berlin today, is set to discuss lockdown plans with the leaders of Germany’s 16 states on Wednesday

Deaths have also increased, with 262 in the last week compared to 88 a fortnight ago, although the figures are lower than in most of Western Europe.

‘We are dealing with exponential growth,’ said Merkel’s economy minister Peter Altmaier. ‘In Germany the number of new infections is rising by 70-75 per cent compared to the week before.’

Altmaier said rising infections across Europe would make it harder for economic growth to rebound as quickly as previously hoped.

But he said he did not expect supply chains to be disrupted like they were during the first wave of the virus in spring.

Huge swathes of Germany are now above the weekly 50-cases-per-100,000 limit which triggers new restrictions under the current regime.

One Alpine district in Bavaria went into a local lockdown last week, while Berlin imposed a curfew for bars but saw it overturned by a court. 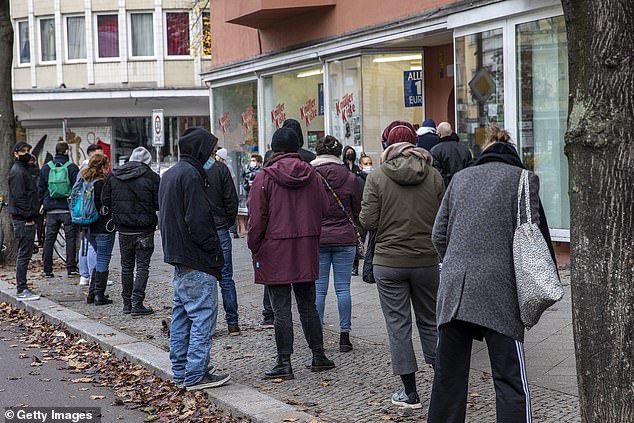 People queue outside a doctor’s surgery in Berlin to be tested today, with the second wave in full swing in Germany

Merkel said at the end of September that there could be 19,200 coronavirus cases per day by Christmas.

The daily average has already climbed to 10,900, and Altmaier said there could be a jump of 20,000 as soon as the end of this week.

Finance minister Olaf Scholz said the increase in new infections was ‘very worrying,’ and authorities had to quickly implement ‘targeted, temporary and focused’ measures as uniformly across Germany as possible.

‘So far, our country has fared quite well during the coronavirus pandemic and it will be decided in the coming weeks whether it will stay that way. It’s in our hands,’ Scholz said.

Germany’s overall death toll of 10,098 is well below that in Britain, France, Spain or Italy despite having a larger population than all of those countries.

The current infection rate of 91 cases per 100,000 people in the last week is also the lowest of the five major economies of Western Europe.