The United States is now thought to be on a worse trajectory than Italy with more than 86,000 confirmed coronavirus cases and a death toll of 1,300 Thursday evening.

Data shows a surge of coronavirus hotspots where cases are outstripping the origin of the pandemic, Wuhan. New York City recorded 365 deaths Thursday, up from 280 Wednesday.

Cities including New Orleans, Miami and Chicago each have more than 1,500 cases – unlike China where no area outside Hubei ever reached that. A total of 12 states have already surpassed 1,500 cases each.

The figures suggest the pandemic will reach all corners of the nation as Donald Trump repeated his calls to see the lockdown lifted by Easter. White House counselor Kellyanne Conway said Trump developed the Easter date as a goal to give people ‘hope.’

As hotspots emerge across the country, epidemiologists at the University of Washington predict more than 80,000 Americans will die in the next four months if medics do not get the resources they need.

New figures released on Thursday show that the US has overtaken China and Italy with the number of confirmed cases in the global pandemic. Forecasts show there could be thousands of deaths a day.

Figures show that a week after the tenth death New York’s toll doubled nearly every 1.5 days; the worst-hit region of Italy, Lombardy, saw a doubling every three days. Cases have also accelerated at a faster rate in the US, than in Italy, Newsweek reports.

The Surgeon General Jerome Adams warned: ‘We could be worse than Italy if we don’t participate in these 15 days to stop the spread.’ 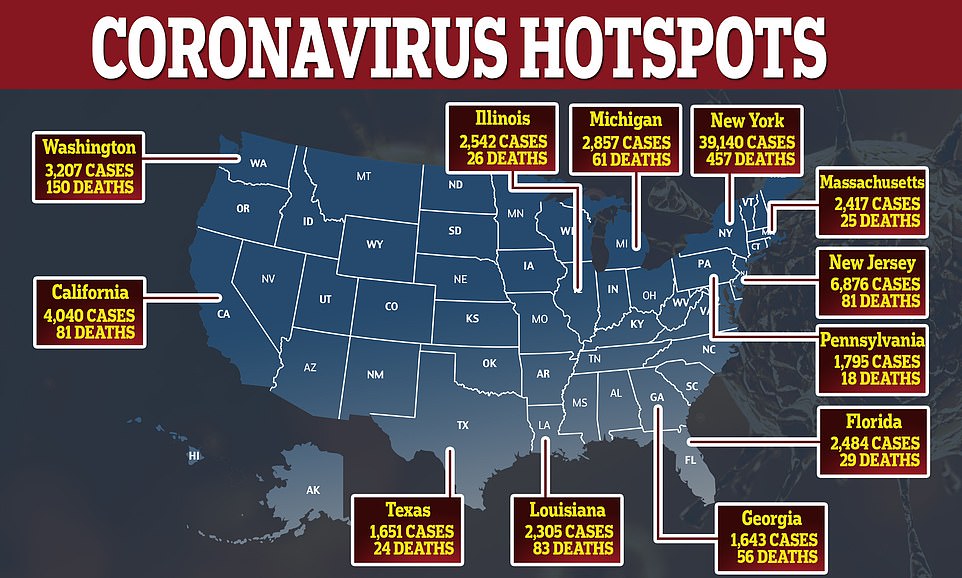 Cities including New Orleans, Miami and Chicago each have more than 1,500 cases – unlike China where no area outside Hubei ever reached that. A total of 12 states have already surpassed 1,500 cases each 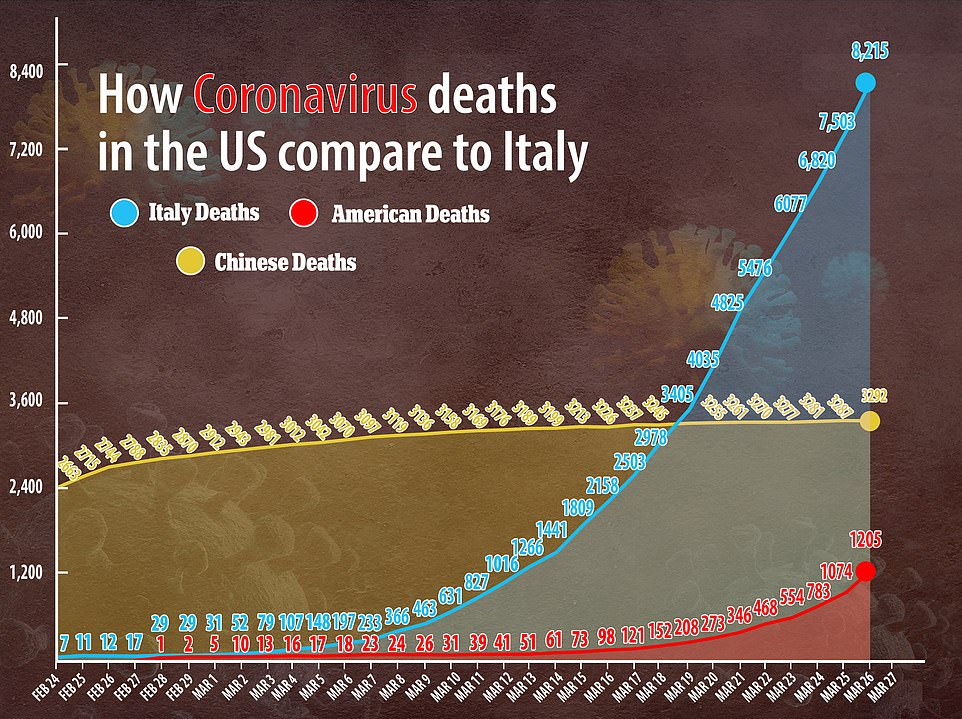 Figures show that a week after the tenth death New York’s toll doubled nearly every 1.5 days; the worst-hit region of Italy, Lombardy, saw a doubling every three days. Cases have also accelerated at a faster rate in the US, than in Italy

At New York City-area hospitals on the front lines of the biggest coronavirus outbreak in the nation, workers are increasingly concerned about the ravages of the illness in their own ranks, and that the lack of testing and protective gear is making it not a matter of if they get it, but when.

‘Our emergency room was like a petri dish,’ said Benny Mathew, a nurse at Montefiore Medical Center who got word Thursday that he had COVID-19 and is now worried he may infect his wife and two daughters.

‘I’m angry. We could have secured enough personal protective equipment months ago. It was happening in China since December,’ he said. ‘But we thought it was never going to happen here.’

Some hospitals in the city, now the epicenter of the virus in the U.S., are now so overrun with dying patients that they’ve brought in refrigerated trucks to handle the bodies.

At Elmhurst Hospital in Queens, 13 people succumbed to the virus in one day. City ambulances have seen a surge in calls, responding to nearly 5,800 on Thursday alone.

As the virus moves nationwide other states are rushing to try and stop its spread.

Texas joined other states Thursday in imposing quarantines on travelers from the New York area and put similar restrictions on people arriving from nearby New Orleans as the number of cases there surges dramatically.

By requiring anyone arriving by plane from New Orleans and the New York area — including New Jersey and Connecticut — to quarantine for 14 days, Texas became the latest state to race to isolate travelers coming from places where the coronavirus crisis is most severe.

New Orleans is also becoming a major center of COVID-19 worries, as the number of cases Thursday surpassed 2,300 and deaths climbed to 86. 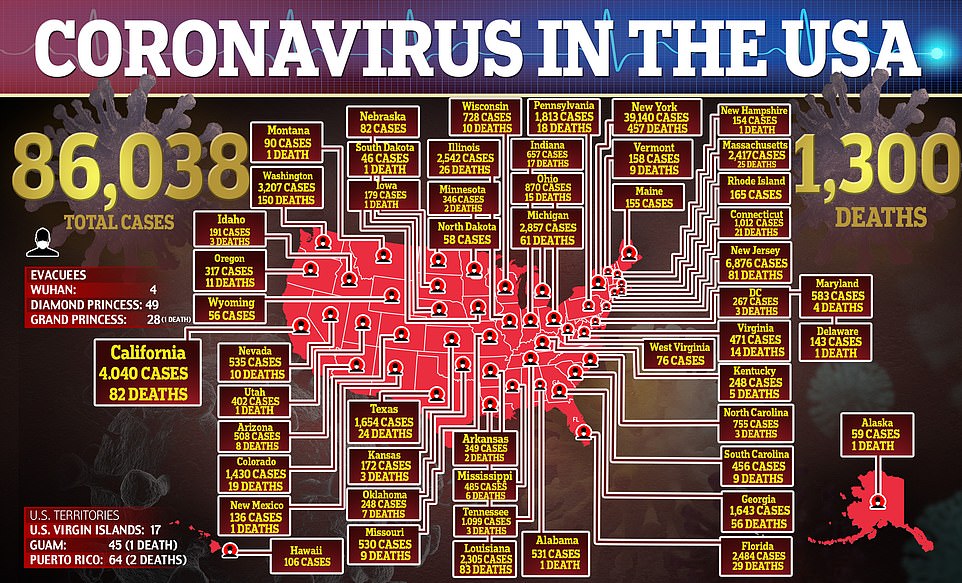 The United States is now thought to be on a worse trajectory than Italy with more than 86,000 confirmed coronavirus cases and a death toll of 1,300 Thursday evening 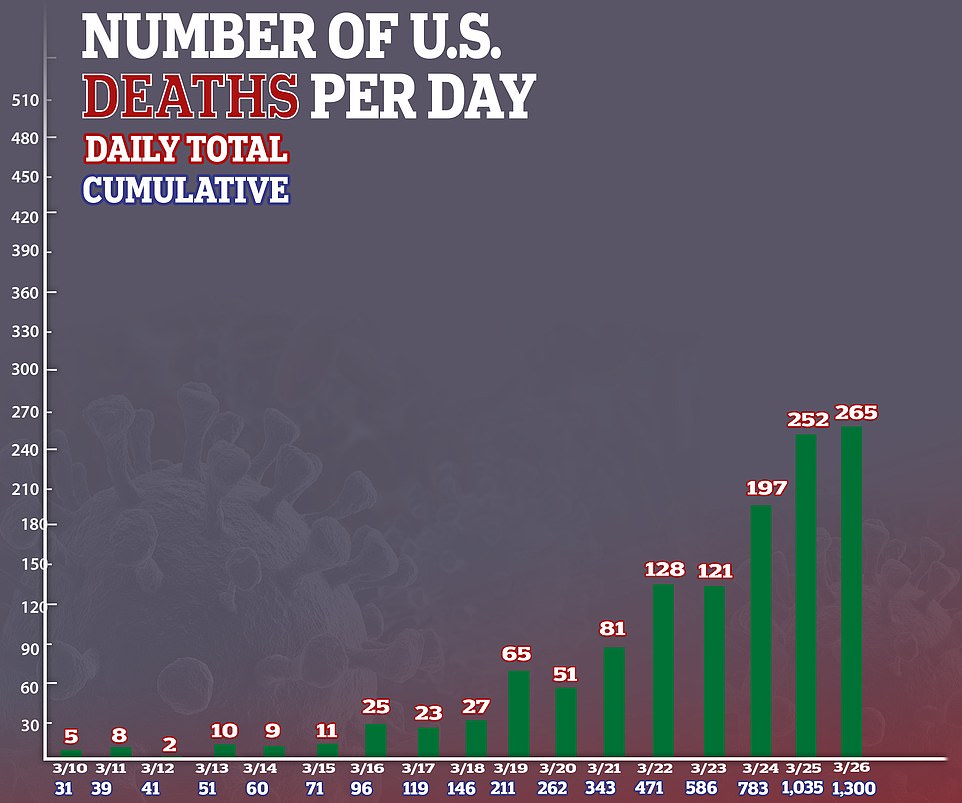 The United States now has the most coronavirus cases in the world with 86,038 infections and 1,300 deaths 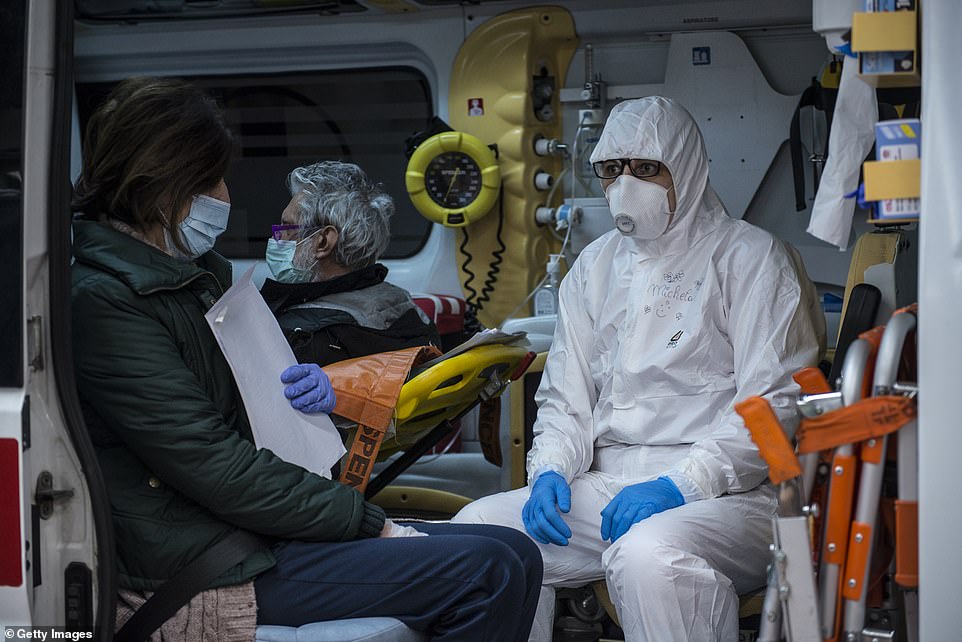 Medical personnel with protective suits transport the possible cases of COVID-19 to the Molinette hospital through the use of ambulances on March 26, 2020 in Turin, Italy 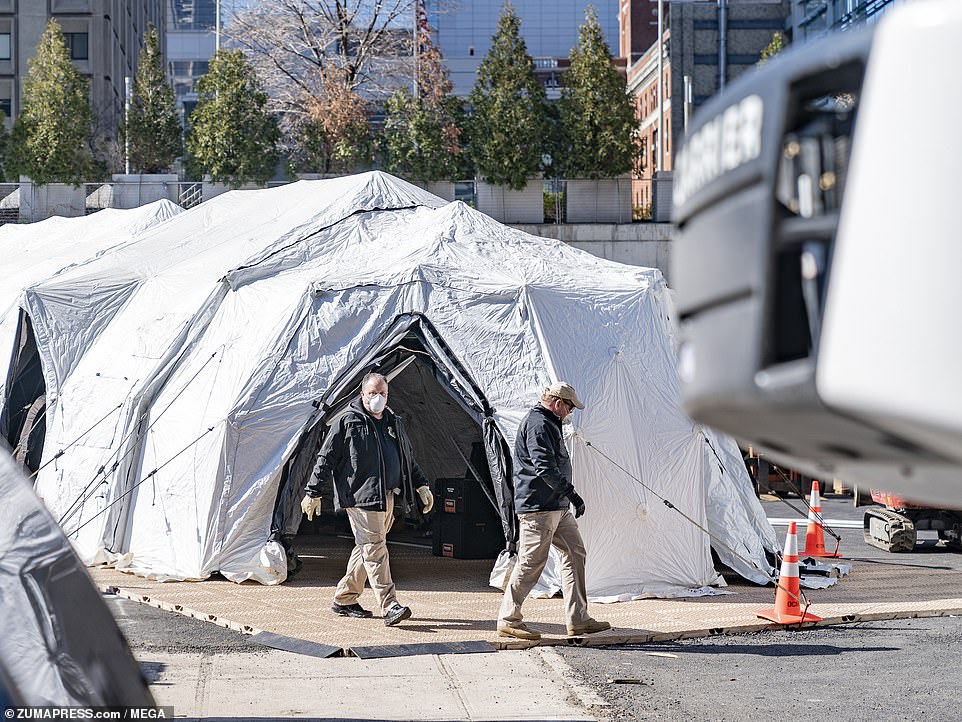 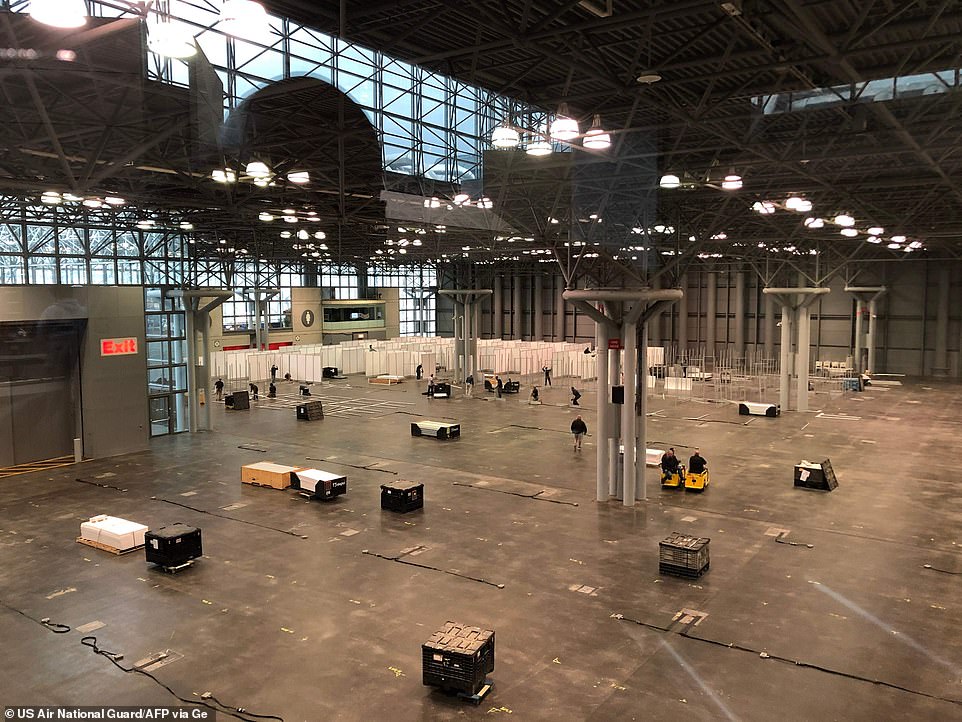 The Javits Center, pictured, Wednesday, will be converted to a temporary medical facility to ease the bed shortage of NY Hospitals as part of the state response to the COVID-19 outbreak 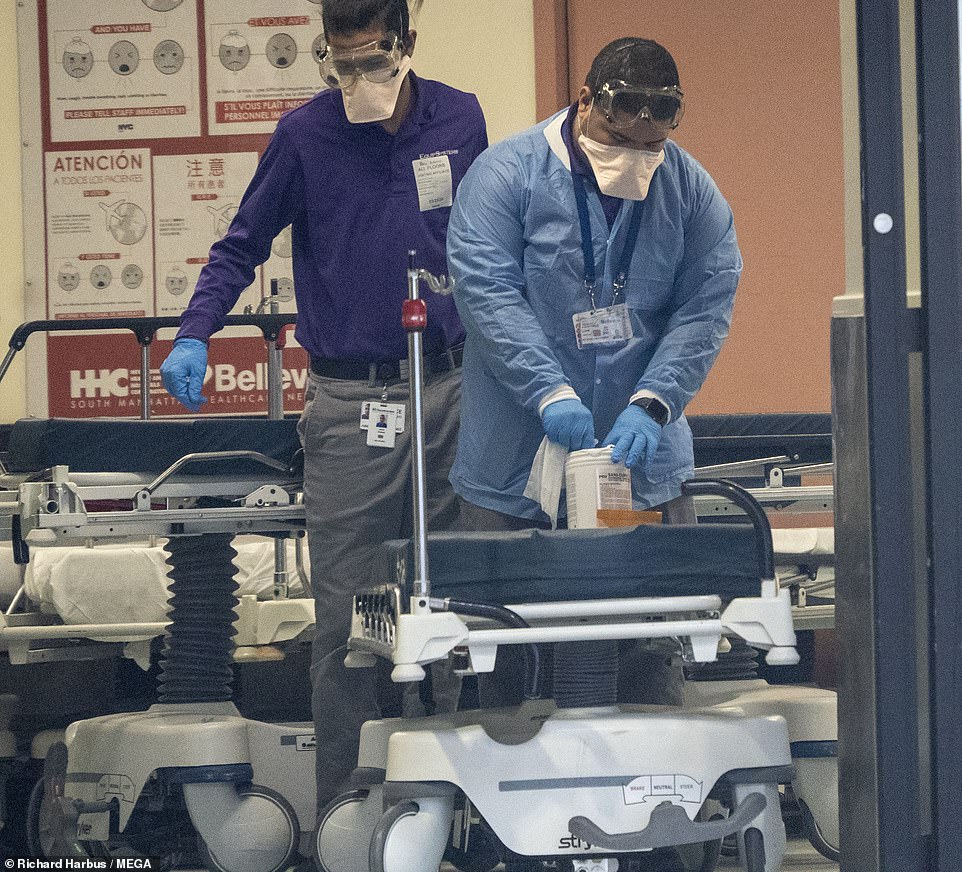 In Lakewood, New Jersey, police broke up a wedding being held in violation of a ban on large gatherings.

And in Austin, Texas, officers are encouraging people to call a hotline to snitch on violators of the city’s orders for people to stay home.

Along with park rangers, fire inspectors and other public servants, officers more accustomed to chasing suspects and solving crimes are spending these troubled days cajoling people to stay at least 6 feet apart.

Italy is still the hardest hit country in terms of deaths with more than 8,000 fatalities. China, where the pandemic began in December, has recorded more than 3,000 deaths.

The number of coronavirus infections have now topped a half-million worldwide.

It comes after the World Health Organization this week predicted a grim outlook for the US, saying that the country would quickly become the global epicenter of the coronavirus pandemic given the ‘very large acceleration’ of confirmed infections.

Late Thursday it was reported there are now 365 deaths in New York City and more than 21,000 infections.

Louisiana is now emerging as the possible next epicenter of the US outbreak after infections rose by 30 percent in 24 hours. That state recorded 2,305 infections and 83 deaths by Thursday. Mardi Gras celebrations in New Orleans has been blamed for the outbreak there.

It comes as new research showed the outbreak could lead to more than 80,000 deaths in the US within the next four months and overwhelm hospital capacity nationally as soon as early April even if social distancing measures are respected.

Forecasters at the Institute for Health Metrics and Evaluation (IHME) at the University of Washington’s School of Medicine have predicted that during the epidemic peak – set for some point in April – as many as 2,300 patients could die every day.

This was the case even if the population adhered to strict social distancing measures. 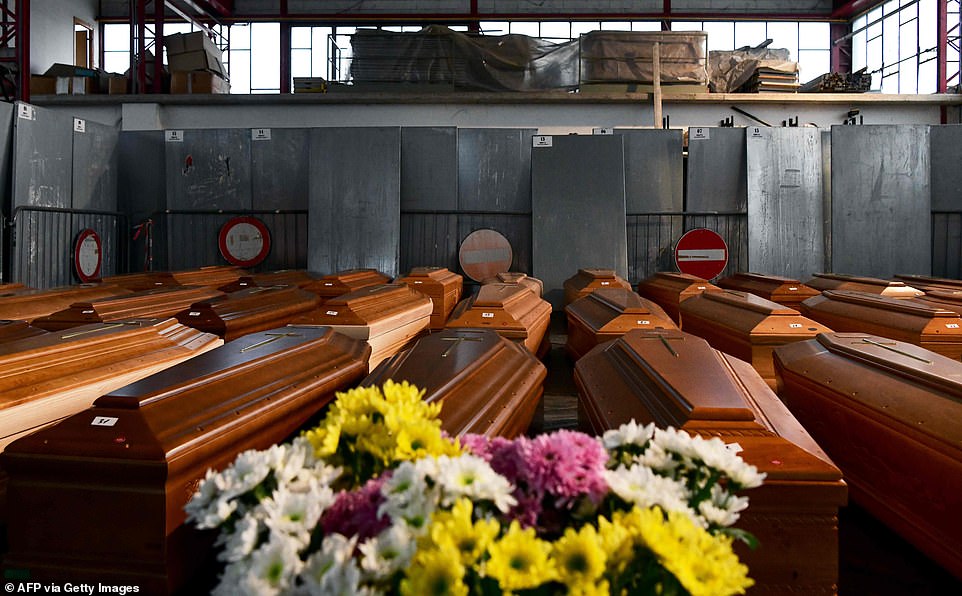 The coffins of deceased people stored in a warehouse near Bergamo, Lombardy

New York City’s convention center is now being turned into a temporary hospital and a makeshift morgue was set up outside Manhattan’s Bellevue Hospital on Wednesday to cope with a possible surge in victims.

Public health officials in New York hunted down beds and medical equipment and put out a call for more doctors and nurses for fear the number of sick will explode in a matter of weeks, overwhelming hospitals as has happened in Italy and Spain.

In a preview of what might be ahead for the US, Spain has converted hotels into makeshift hospitals and turned an ice rink in Madrid into a temporary morgue. The curve of infections has not slowed in Spain, which now has more than 4,100 deaths, second only to Italy’s death toll.

Faced with the exponential spread of the pandemic, the US Senate passed a $2.2 trillion economic rescue package steering aid to businesses, workers and health care systems.

Millions of Americans hoped the measure would give them a lifeline as they lost jobs, income and child care due to the social-distancing rules needed to slow the spread of the virus.

At least 1.5 billion people across the world are now under severe travel restrictions.

But the head of the World Health Organization, Tedros Adhanom Ghebreyesus, scolded world leaders for wasting precious time in the fight against the virus that has already killed more than 21,000 people, thrown millions out of work and ravaged the world economy. 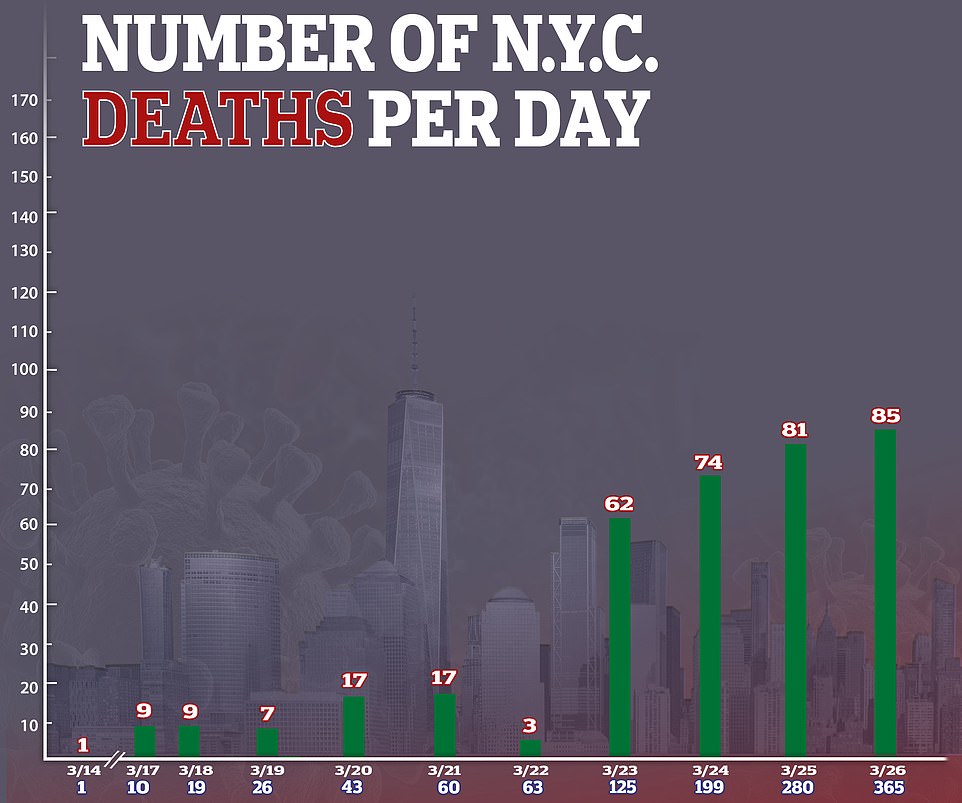 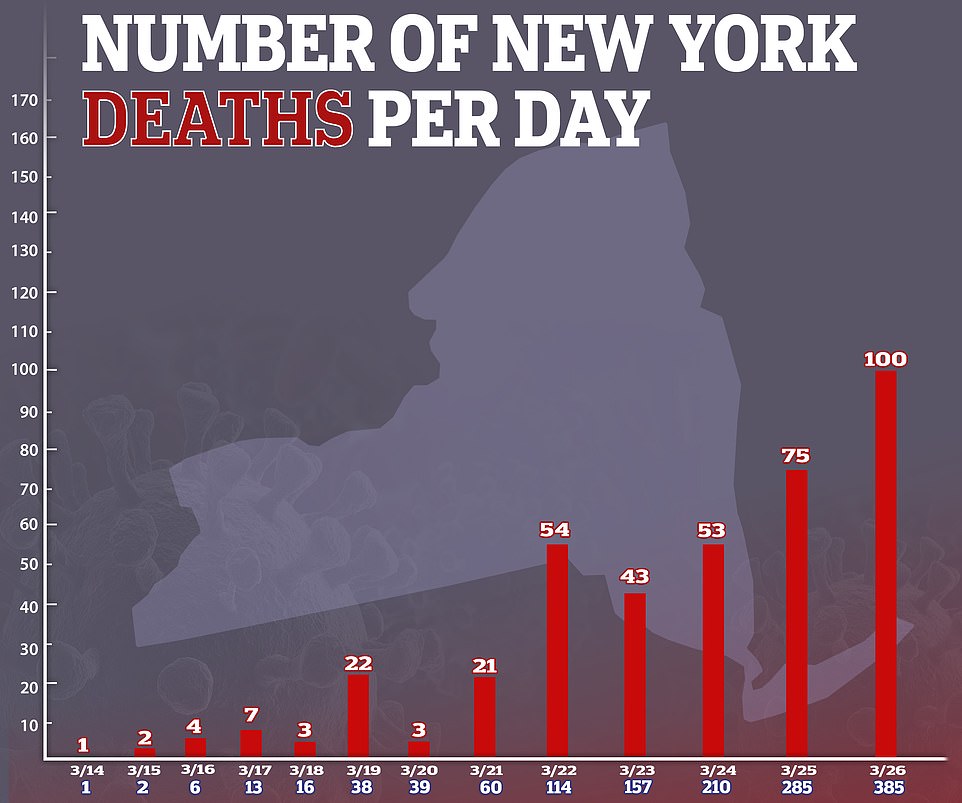 U.S. deaths have now topped 1,100, in another grim update for a global outbreak that has wreaked havoc on economies and established routines of life. Worldwide, the death toll climbed past 23,000, according to Johns Hopkins’ running count.

House Speaker Nancy Pelosi said Congress will give final approval Friday to the $2.2 trillion economic rescue bill, a vote that would cap Congress’ tumultuous effort to rush the relief to a nation battered by the coronavirus. Stocks marched higher for a third straight day Friday as the bill moved closer to passage.

With rare bipartisanship and speed, Washington is about to deliver massive, unprecedented legislation to speed help to individuals and businesses as the coronavirus pandemic takes a devastating toll on the U.S. economy and health care system.

The House is set to pass the sprawling, $2.2 trillion measure Friday morning after an extraordinary 96-0 Senate vote late Wednesday.

President Donald Trump marveled at the unanimity Thursday and is eager to sign the package into law. 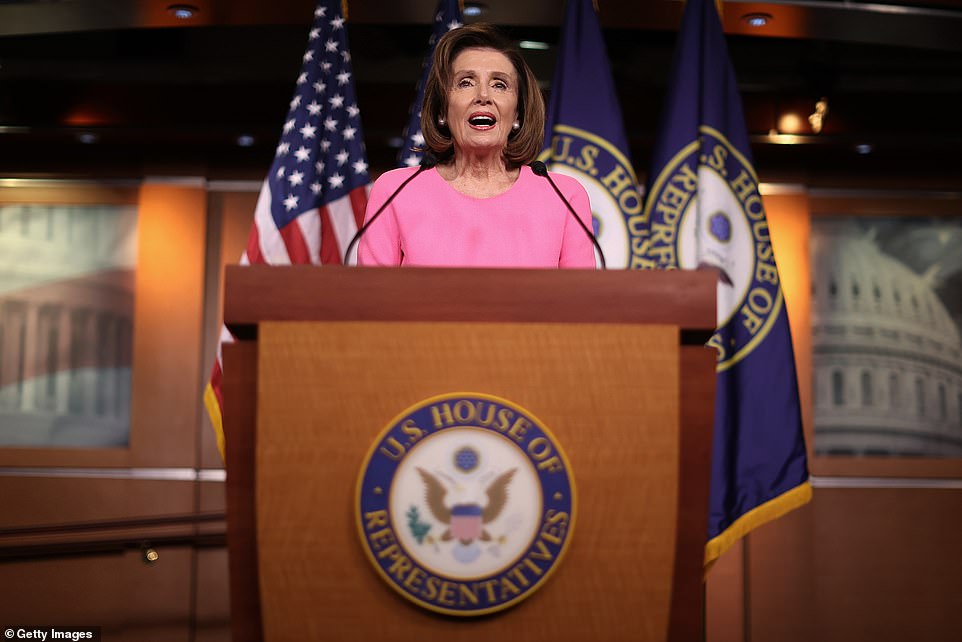 It is unlikely to be the end of the federal response. House Speaker Nancy Pelosi said Thursday that issues like more generous food stamp payments, aid to state and local governments, and family leave may be revisited in subsequent legislation.

‘There’s so many things we didn’t get in … that we need to,’ Pelosi told reporters Thursday.

The legislation will pour $1,200 direct payments to individuals and a flood of subsidized loans, grants and tax breaks to businesses facing extinction in an economic shutdown caused as Americans self-isolate by the tens of millions.

It dwarfs prior Washington efforts to take on economic crises and natural disasters, such as the 2008 Wall Street bailout and President Barack Obama’s first-year economic recovery act.