Italian researchers have revealed plans to test a vaccine on humans after claiming their jab is the ‘first in the world’ to neutralise the virus.

Scientists gave mice the jab – which is being developed by Rome-based Takis Biotech – and took the antibodies they made in response.

Antibodies are substances produced by the immune system to remember how to fight off a specific infection, and are vital for immunity.

Preliminary results from lab tests showed the antibodies created in test mice were able to stop human cells being infected with the coronavirus.

Takis chief executive Luigi Aurisicchio revealed the Italian team plans to start trials in the autumn, as scientists race to halt the pandemic.

He said: ‘As far as we know we are the first in the world so far to have demonstrated a neutralisation of the coronavirus by a vaccine.’

But leading scientists today said they would be amazed if none of the other vaccines in development hadn’t shown a similar response in mice.

Oxford University is one of several teams around the world already trailling a jab on humans – and plans to have millions of doses ready by September.

Health Secretary Matt Hancock said today, however, that there is no guarantee an antidote for the coronavirus will ever be found. 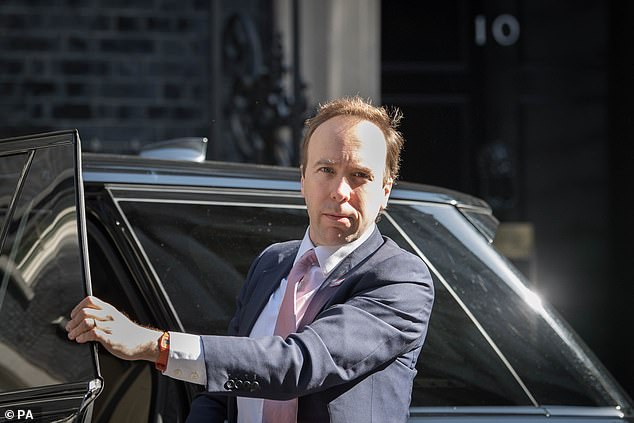 The Italian team compared a single dose of five different vaccine candidates on mice at Spallanzani Hospital in Rome.

All are DNA based vaccines; the method involved injecting a tiny amount of cloned genetic code from the virus into the body.

DNA or RNA based vaccines are not made with a weakened or deactivated virus, nor elements of the virus, which means they can be produced on a huge scale in the lab without needing any fresh samples.

The DNA in the vaccine gets taken up into the recipient’s cells and the body reacts in a similar way as it would if it were infected with the real virus, triggering an immune response. The virus’s absence, however, means their health is not put at risk.

Each candidate produced a ‘strong antibody response’ against the virus in 14 days, the researchers said.

Two in particular were considered to be ‘the best candidates for a future clinical study’, Takis said.

Antibodies, substances created in response to a virus, were taken from the blood of the mice and added to human cells that had been grown in a petri dish.

They worked against the infection and successfully prevented the SARS-CoV-2 virus from binding to, and infecting, the human cells.

According to Italian news agency ANSA, Mr Aurisicchio said this week: ‘This is the most advanced stage of testing of a candidate vaccine created in Italy.

‘According to Spallanzani Hospital, as far as we know we are the first in the world so far to have demonstrated a neutralisation of the coronavirus by a vaccine.

‘We expect this to happen in humans too.’ He added that human tests are expected ‘after this summer’, implying they would begin in the autumn.

Mr Aurisicchio added that the process could be sped up if international institutions helped to fund the work.

Takis said the results were ‘extremely positive’ in a statement on April 10. The findings are not publicly available.

Infectious disease experts today described the findings as promising, as scientists around the world continue to hunt down an effective vaccine.

But Dr Andrew Preston, who specialises in microbial pathogenesis and vaccines at the University of Bath, added they had a ‘long way to go’.

He told MailOnline: ‘Any vaccine that has reached development would have shown a response in mice. It would be amazing if they didn’t.

‘I’m sure that a vast majority of those projects would have produced the same effect. They have gone one step further to see if the antibodies have a function.

The Italian researchers are making a DNA-based vaccine. These type of vaccines take a part of the virus’ genetic code and inject the DNA sequence into animals to produce antibodies, which fight off diseases. These antibodies – which recognise COVID-19 and know how to beat it – are tested on human cells to see if they work in killing the virus. If it is successful, the vaccine can be trialled on humans to see if they produce their own antibody response 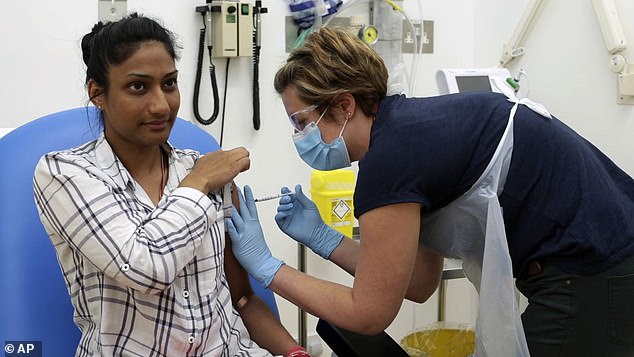 Scientists said testing on animals was routine for vaccine development before it can go into human trials. Pictured, a volunteer in the study at Oxford University

VACCINES CREATED BY OXFORD AND IMPERIAL COLLEGE: WHAT ARE THE DIFFERENCES?

‘Chances are that is going to happen. But it’s a huge extrapolation to say that is what will happen in the course of infection [in a human].’

Dr Preston added that the Italian researchers tested an immune response, not a vaccine itself.

Professor Adam Finn, of Bristol Children’s Vaccine Centre, said: ‘They have a way to go before they get into human trials – they are about in the same place as most vaccines.

‘Vaccines already in human trials had already done the ground work with other versions of the same vaccine or just didn’t bother.’

There are at least eight vaccines in clinical evaluation, according to the World Health Organisation. It means their effectiveness for preventing COVID-19 is being tested.

This includes ChAdOx1, developed by Oxford University, who started a trial on April 23. It is a type of immunisation known as a recombinant viral vector vaccine.

Another developed by Imperial College London is hoped to be given to study participants this summer.

Inovio Pharmaceuticals are also trialling their DNA-based vaccine in the US, having given it to 40 Americans in late April.

Around 100 others are listed as being in pre-clinical stages, including the one made by Takis.

But Health Secretary Matt Hancock is being cautious, and said the deadly infection may become a disease humans have to learn to live with.

Speaking on Sky News today, he said: ‘If a vaccine can’t be found then we have to learn to find a way to live with this virus so that means getting the numbers down and holding them down through, for instance, mass-scale testing and then tracing the virus through a combination of technology and human contact tracers.’

Dr Preston said he was ‘far more positive’ about finding a vaccine, one which at least works to prevent serious illness and death.

He said: ‘If it stops serious disease, that might be fine. If COVID-19 is another cause of a fever for 24 hours, compared to where we are now, that works too and we can live with that.

‘I’d be really surprised if we didn’t a vaccine that didn’t at least give us that, even if it is not an eradication.’