coronavirus June 1 500 to be allowed in NSW clubs

Big venues in NSW will be able to host up to 500 patrons when lockdown restrictions ease on Monday.

Last week, the NSW Government announced a limit of 50 people would be allowed in pubs, restaurants and cafes from June 1.

But clubs’ patron capacity can increase depending on the number of restaurants and cafes inside the club.

So a venue with three restaurants and two cafes, for example, can admit up to 500, provided they can maintain the one patron per four square metre rule and eateries remains open at all times.

Up to 50 patrons will be permitted in bars, restaurants and cafes from Monday – but bigger venues with multiple dining areas will be able to accommodate more

Bigger venues with multiple restaurants and bars are permitted to hold an additional 50 patrons per dining area as long as certain requirements are met.

Staff and contractors are not included in the capacity.

An internal industry document obtained by the ABC, sent to members of NSW Clubs, informed venues how they would be able to open with more than 500 guests.

Mr Landis tells members: ‘Following further engagement by ClubsNSW, the upper limit of 500 patrons in a venue has been removed. Instead, the upper limit will be determined by the number of ‘dining areas’ in the club, in conjunction with the 4 square metre rule.’

In accordance with the dining area rule, it suggested clubs may use conference facilities as additional dining areas if they are frequently used for seated dining and clubs could split large rooms using physical barriers to make different dining areas.

Minister for Customer Service Victor Dominello, who is responsible for liquor and gaming regulation, said the NSW Government had liaised exhaustively with both AHA and ClubsNSW to deliver this plan. 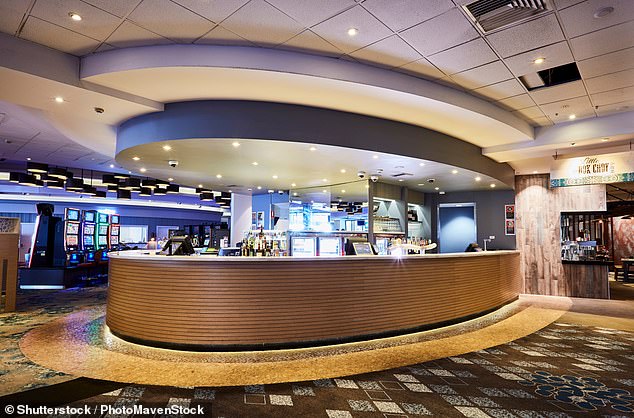 Large clubs with multiple dining facilities will be permitted to have an additional 50 patrons per area. Pictured is an Australian RSL

It comes as the federal government prepares to discuss fast tracking the reopening the economy in two weeks at a national cabinet meeting if infection rates remain low.

Scott Morrison has been told the benchmark for reducing restrictions is 10 infections a day – excluding those Australians returning from overseas.

Premier Gladys Berejiklian on Friday said in a statement that from June 1, up to 20 people could attend weddings, 50 at funerals and 50 at places of worship.

However strict social distancing guidelines would continue to apply.

We know how important these services are to individuals and families but as we ease restrictions further, we must remember to keep one another safe,’ Ms Berejiklian said.

‘It is crucial that worshippers remember to follow health advice. This is particularly important for people with co-morbidities aged over 50 and people aged over 70.’

The government had been wary about adjusting the restrictions on places of worship after observing COVID-19 outbreaks in churches and church choirs overseas.

But state religious leaders pushed for the relaxation after the government last week announced up to 50 people would be allowed to dine in restaurants, pubs and cafes from June 1. 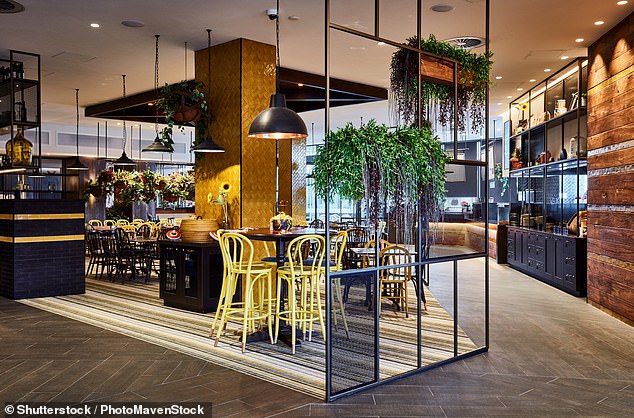 ‘Places of worship will be asked to find alternatives to practices that might spread the virus, like singing, sharing books and even passing around the collection plate,’ Dr Chant said on Friday.

‘Communal singing and chanting should not occur because of the high risk of transmission.’

Anthony Fisher, the Catholic Archbishop of Sydney, on Friday said in a statement he was pleased the government had heeded the requests of NSW churchgoers.

He emphasised the Catholic church would abide by all government health regulations.

‘The closure of our churches and indeed of all places of worship has been deeply distressing for many people of faith in our community,’ Archbishop Fisher said.

‘It added to the isolation and anxiety that so many were feeling. 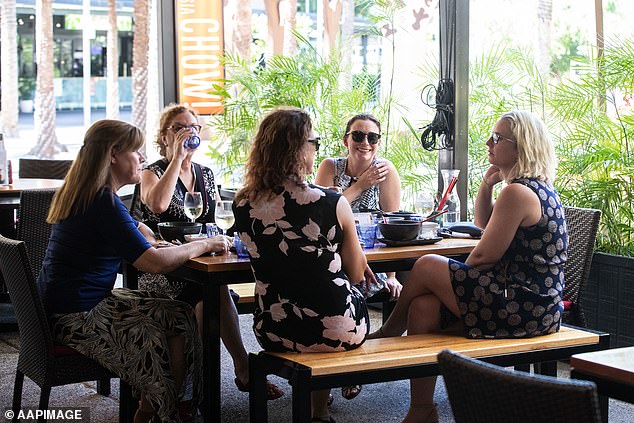 Guests will still be required to maintain social distancing as they head to pubs when restrictions ease next week. Pictured are women enjoying a drink in a Darwin bar on May 15 after the NT reopened licensed premises earlier this month

‘With restrictions easing, many were concerned that the churches were being left behind, and wanted to make their voices heard. People of faith weren’t asking for special treatment, but wanted to be treated equally.’

Meanwhile, the state government has a fight on its hands to get a 12-month public sector pay freeze through parliament, with upper house crossbench MPs vowing to block the $3 billion saving measure.

Ms Berejiklian on Thursday raised the possibility of job losses amid the COVID-19 pandemic unless the proposed freeze was endorsed on Macquarie Street.

But NSW Labor, the Greens and the Shooters Party have flagged they will block the move in the Legislative Council, with one crossbencher arguing the coalition is engaging in ‘economic blackmail’ during a health crisis.

Ms Berejiklian last week sought a freeze on pay rises for MPs, which was extended on Wednesday to include the entire NSW public service comprising 410,000 workers.

Unions NSW secretary Mark Morey has labelled the plan an act of ‘economic vandalism’ at a time when frontline workers such as nurses, police officers and teachers are risking their lives.

HOW VENUES WILL BE ABLE TO HOST 500 PATRONS FROM MONDAY