Coronavirus-laden particles in lifts can survive for half an hour

Infected coronavirus particles from a cough can swirl around inside a lift for up to half an hour if the doors are kept closed, according to a new study.

Experts from the University of Amsterdam mimicked a series of coughs inside a hospital lift to determine how long they lasted under different conditions.

When the doors to the lift are kept shut an infected droplet can last for up to half an hour, but when always open the droplets are gone within four minutes.

Under normal lift operations with doors regularly opening and closing the infected droplets generated from a cough or loud talking can last for about ten minutes.

The team say wearing a mask while in a lift mitigates some of the problem and proper ventilation at all times, not just when a lift is moving is also vital.

When the doors to the lift are kept shut an infected droplet can last for up to half an hour, but when always open the droplets are gone within four minutes 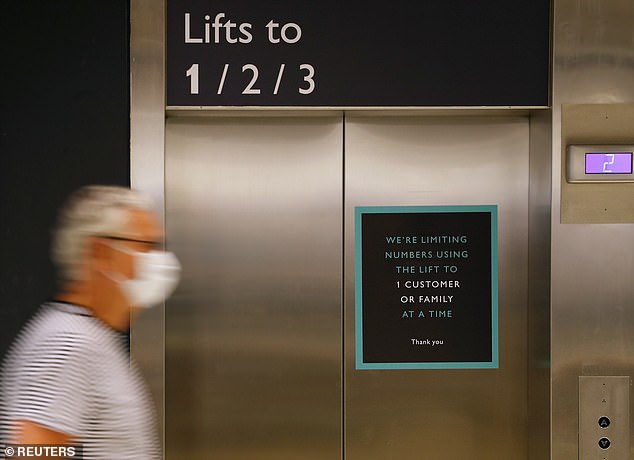 Experts from the University of Amsterdam mimicked a series of coughs inside a hospital lift to determine how long they lasted under different conditions. Stock image

Aerosols, which contain small respiratory particles, are increasingly viewed as a potentially important way of transmitting the coronavirus, the team explained.

To recreate the size and shape of the aerosols produced from a cough, lead researchers Daniel Bonn and colleagues created a spray nozzle.

They then sprayed the simulated droplets into an elevator and used a laser to illuminate the particles – so that they could be counted and tracked over time.

The experiments were performed in elevator cabins during normal operation, which means that the door is open about 10-20 per cent of the time.

‘We found out that during such normal operation, it takes 12 to 18 minutes before the number of aerosol particles decreases by a factor of one hundred,’ says Bonn.

‘When the elevator doors are permanently open, this time reduces to 2 to 4 minutes.’

Corona-infected sputum – a mixture of saliva and mucus coughed up – from hospitalised but mildly ill patients can carry between ten thousand and one billion copies of the virus per milliliter, the team explained.

One billion copies corresponds to roughly one virus particle per aerosol droplet.

Loud speaking may produce up to a few hundred thousand droplets per minute, whereas a single cough can already produce a few million droplets.

CORONAVIRUS SPREADS IN A LIFT EVEN AFTER SOMEONE LEAVES

If someone infected with Covid-19 coughs in a lift the droplets can remain for up to half an hour after they leave.

Someone coming into the lift before the droplets evaporate could catch the virus – even after the cougher left.

The amount of time the droplets last varies depending on how long the doors are open.

If you breath the air inside an elevator after an infected person has been speaking or coughing – you are taking in up to thousands of Covid-19 particles per minute.

Previous studies have used laser light to track the spread of spit droplets as people speak and found they can spray through the air and potentially spread the virus.

As the speaker increases the volume of his speech the amount of spit sprayed, or droplets produced, also increases.

In a very confined space, such as a lift, those droplets could easily infect other people that come in later – especially if they remain in the air.

This new study found that during normal operations infected spit can remain for up to ten minutes after the infected person coughed and left.

The researchers recommend to leave elevator doors open for a longer period whenever possible, and to either avoid talking and coughing in elevators or wear a proper face mask.

They also point out the importance of optimising the ventilation and increasing the mechanical ventilation capacity.

Study co-author Dr Cees van Rijn said it turns out that ventilation inside elevators not moving automatically shuts off after one or two minutes.

‘This can of course easily be prolonged by reprogramming the action control software,’ van Rijn said.

‘In most hospital elevators the ventilator is present in the ceiling and exhausts air from the cabin towards the elevator shaft.

‘A possible measure is reversing the flow direction of the ventilator, creating a downflow of fresh air from the ceiling towards the floor of the elevator cabin.’

Previous studies have shown that something as simple as talking while infected can lead to a spread of the virus when in a confined space.

Dr Julian Tang, an expert in respiratory conditions, from the University of Leicester, told BBC News that droplets produced by talking don’t travel as far as they do from a sneeze or a cough – which can travel up to 22ft.

‘But they can travel far enough to affect your friend sitting opposite you, or someone who’s chatting to you,’ Tang said.

The findings have been published in the International Journal of Indoor Environment and Health.