Coronavirus may be spread by touching contaminated surfaces

Coronavirus may be spread by touching contaminated surfaces, WHO warns as global cases surge past 6,000 and the death toll hits 133

There is evidence that the coronavirus ‘can also be spread via fomites – when the virus survives on inanimate surfaces for a short period of time,’ said Dr Maria Van Kerkhove, a member of the WHO’s emergency committee on the outbreak.

If the possibility becomes a certainty, it’s a worrying revelation for hospital settings, where patients coming to be diagnosed and treated for coronavirus may touch chairs, tables, beds, railings and much more.

WHO officials are careful to note that it’s not yet clear how contagious the new virus is, but its ability to be transferred from surfaces to people could speed its already alarming spread.

Viruses that infect animals can mutate to take forms that can infect humans.

Just how many more depends on the incubation period of the virus ans how many transmissions it can withstand while still being strong enough to infect someone.

Experts estimate that the virus has an incubation between two and 14 days – although a small subset of cases suggest that it may be transmissible even before symptoms begin.

A pathogen’s R0 (‘R-nought’) describes how many people will likely get infected by each patient.

So if a disease has an R1, one case of an infection will likely lead to just one more.

Attempt to estimate this have yielded variable results and caused some confusion and concern.

Currently, the WHO estimates the spread to be between 1.4 and 2.5. Most estimates are somewhere between two and three cases for every one.

It it’s as high as three, the coronavirus may indeed be on track to reach pandemic levels. 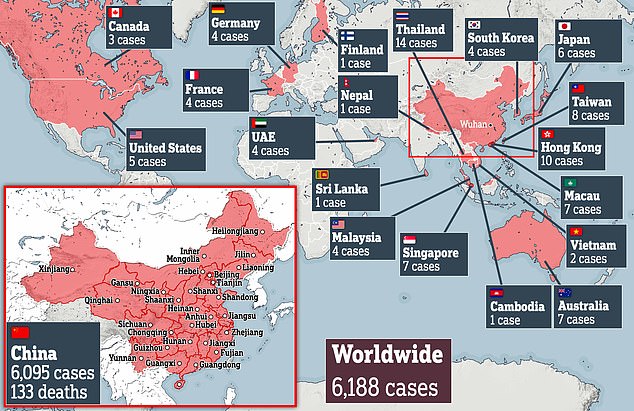 The more ways the virus can spread, the greater the likelihood it will continue to strike more than the 6,188 people already sickened worldwide

And the possibility for humans to pick it up from surfaces adds to that risk.

During the Wednesday press conference, the WHO emphasized that it’s very difficult to quantify how an infection spreads from an asymptomatic patients to others.

It’s at least as hard, if not harder, to estimate how it spreads from inanimate objects to humans.

One study, published in 2007, attempted to estimate what percentage of a virus could be transferred from inanimate objects.

Its results suggested that 50 percent of people who touched a surface contaminated with a stomach bug later developed the infection.

Fomite transmission varies, however, between different viruses and based on ho long the germs are sitting on a surface before someone comes along to touch it.

Still as the death toll climbs beyond 130 and cases surpass 6,000, it’s a subject for further study and concern at the WHO and for public health experts.

Despite this additional indicator of pandemic potential, the WHO has thus far declined to declare a public health emergency of international concern (PHEIC).

Instead, global health officials praised the containment efforts made by China but warned that the disease is to be taken seriously worldwide.