While some countries have seen their morgues overloaded with bodies in a traumatic symbol of their huge death tolls, Norway has seen only 253 deaths from the virus and demand for funeral ceremonies has fallen because of the lockdown.

Undertakers say the lockdown has also led to fewer deaths from other diseases, meaning that ‘old and sick people’ who ‘would have died in normal circumstances’ are still alive.

Half a dozen funeral directors have already turned to the state for help, with some receiving grants of more than £3,000 to cover rent and insurance costs.

Struggling to make ends meet: A hearse is seen in Norway where funeral homes have been forced to seek state help as mortality falls despite the coronavirus pandemic

Erik Lande, head of a funeral firm in southern Norway, said his family had never had to seek state help before in three generations of running the business.

‘So much so that some of the old and sick people who would have died in normal circumstances are still around,’ he added.

Usually the firm handles around 30 funerals a month, but that figure fell to less than 10 in the weeks after the lockdown was imposed, he said.

On March 12, Norway’s Prime Minister Erna Solberg announced what she dubbed ‘the strongest and most intrusive measures’ the country had seen in peacetime.

Those included the closure of schools, bars and many public spaces, a ban on sports and cultural events and a curb on foreign travel.

Since then nearly all of the measures have been lifted and the virus has been mostly contained, in stark contrast to neighbouring Sweden where 5,572 people have died.

Although there were enough customers, many of them went without without a full funeral ceremony which accounts for 60 to 70 per cent of the price, said director Henrik Tveter.

Full-scale ceremonies were made more difficult by limits on public gatherings, while some chapels are too small for social distancing. 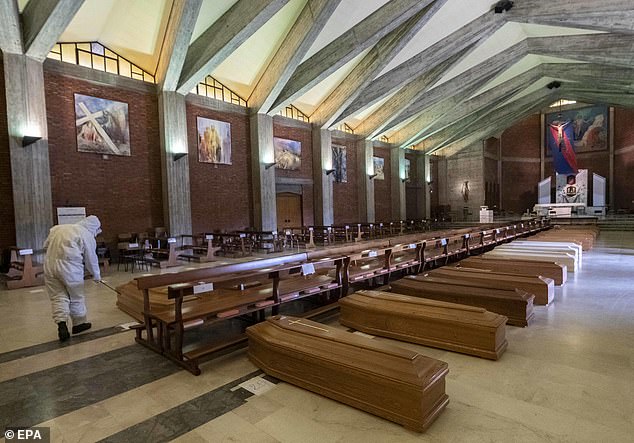 Some countries have seen their morgues and chapels overflowing with bodies in a tragic symbol of the crisis (pictured here, 45 coffins in a church in northern Italy in March)

In Alesund in the west of the Norway, Alfa Begravelsesbyra cut the working hours of its five employees and also had to ask for government aid after a 70 per cent drop in revenue between March and May.

The company’s owner Odd Sverre Oie, like his colleagues, believes that business will return to a grim normality as society re-opens.

‘We know that, given the age pyramid, a certain number of people will die in Norway this year,’ he said.

‘So we’ll probably catch up in the autumn when the flu and other such diseases reappear.’

Official figures show that Norway has 9,001 confirmed cases and 253 deaths, with fewer than 1,000 people ever admitted to hospital.

Even in the worst week of the crisis at the end of March, only 16 people were admitted to intensive care.

Denmark and Finland, which both have similar populations to Norway, have also enjoyed relatively low death tolls with 610 and 329 respectively.

Sweden, which opted against a lockdown and kept bars and restaurants open even at the height of the pandemic, has seen 5,572 deaths – many times higher than its Scandinavian neighbours for a population only twice as large.