Coronavirus outbreak at pub where 200 drinkers were crammed in

Ten people have caught coronavirus at a 17th century pub in a market town where up to 200 drinkers were filmed crammed into a beer garden ‘like sardines’.

Punters and staff who were at the Crown and Anchor in Stone, Staffordshire, between July 16 and 18 are now being told to urgently get swabs done, as well as anyone who has been in close contact with visitors to the pub.

A new centre has been set up 350 yards away at the Crown Street car park, and people who were out in Stone on one of those nights who have since displayed symptoms despite not going to the pub should also now get a test.

One customer at the pub – which has now shut due to overcrowding – who tested positive is also said to have held a private gathering, causing a further spread.  There were 43 new cases in Staffordshire in the week to Sunday.

It comes after local resident Ayrron Robinson filmed a video of people packed into the beer garden earlier this month, saying: ‘If we do have to go into local lockdown then the pub has a lot to answer for.’

Local resident Ayrron Robinson filmed a video of people packed into the Crown and Anchor beer garden in Stone earlier this month, saying: ‘If we do have to go into local lockdown then the pub has a lot to answer for’ 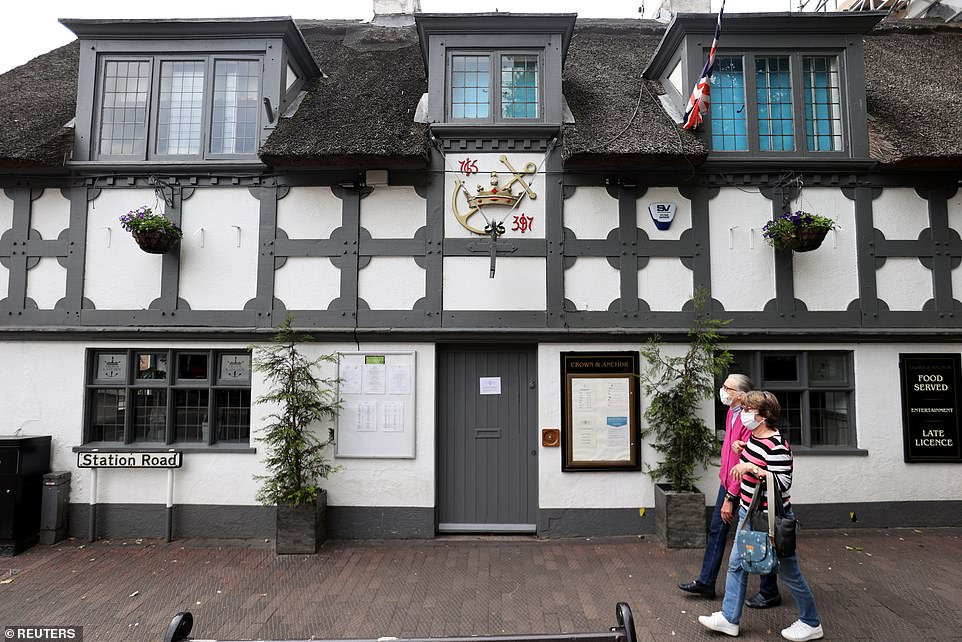 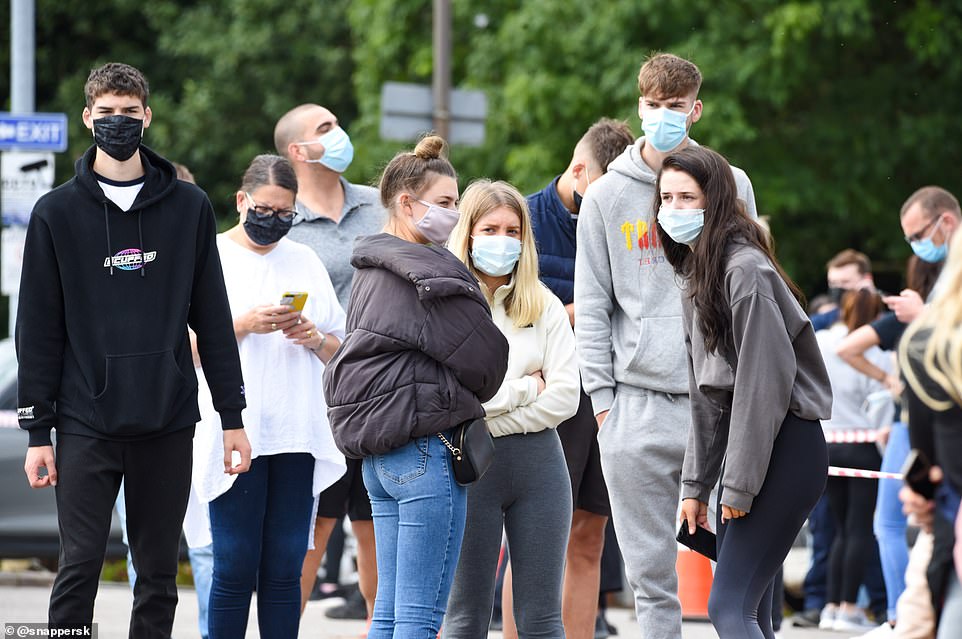 People wait at the coronavirus testing centre in Stone, Staffordshire, today after it was set up following the outbreak 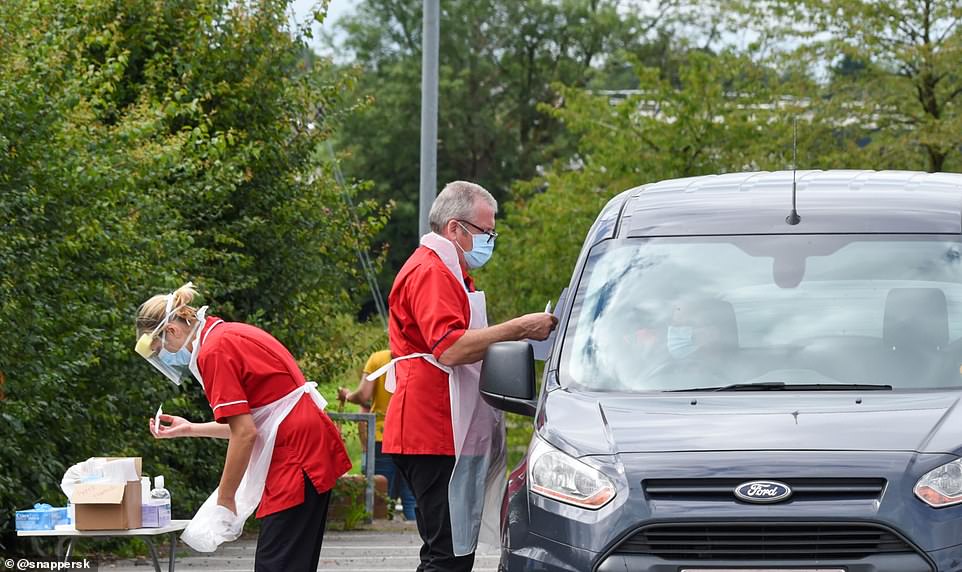 Mr Robinson, 31, who has lived opposite the pub for four years, filmed the clip from his window after becoming concerned about an apparent lack of social distancing.

He said: ‘It’s sensible that the council is acting and taking it seriously but it’s a shame that it’s gone this far. I was very concerned by the amount of people who were there – at least 200.

What is the Government guidance on pubs?

When eating or drinking out with people you do not live with (and who are not in your support bubble), you should keep to the wider guidance on group sizes: up to two households indoors, and up to either two households or six people from more than two households outdoors.

In all cases, people from different households should ensure they socially distance as much as possible.

You should think about where to sit at a table with this in mind – the premises should also take reasonable steps to help you do so in line with Covid-19 secure guidelines.

It remains the case that you do not need to maintain social distancing with those in your support bubble.

This change also does not affect the support you receive from your carers.

Managing the entry of customers, and the number of customers at a venue, so that all indoor customers are seated with appropriate distancing, and those outdoors have appropriately spaced seating or standing room. This is to ensure that the venue, including areas of congestion does not become overcrowded. Managing entry numbers can be done, for example, through reservation systems, social distancing markings, having customers queue at a safe distance for toilets or bringing payment machines to customers, where possible.

‘With a bit of luck the virus won’t have spread too far and turn into a big outbreak. If we do have to go into local lockdown then the pub has a lot to answer for.

‘It’s been the talk of the town for some time now and even the local Covid Facebook group was telling people to get tested.’

The mobile walk-in centre will be open from 10am to 5pm today and Friday and no appointment is needed.

Dr Richard Harling, Staffordshire County Council’s director for public health said: ‘As part of our outbreak control duties, we are dealing with an outbreak at the Crown and Anchor pub in Stone.

‘It is important that anyone drinking or working in the pub on that weekend gets tested as soon as possible, which is why we’ve organised for a mobile testing unit to be in the town all day tomorrow and Friday.

‘We also want people who have been in close contact with anyone drinking in the pub on that weekend to get themselves tested, as well as people who were out and about in the town and are experiencing Covid-19 symptoms – namely a high temperature, new persistent cough or loss of taste and smell.

It is also crucial that people self-isolate if they are told to do so.

‘By getting tested, this gives us important information on the full extent of any outbreak, and allows us to put measures in place if needed to help prevent the spread of infection.

‘We’re doing everything we can to prevent outbreaks and stop the virus from spreading.

‘Residents can help by continuing to follow the rules to stop the spread of Covid-19 – washing hands regularly, keeping your distance, and wearing face coverings in shops and on public transport.’

The Crown and Anchor has now closed after saying it had been ‘overwhelmed’ the previous weekend. It has been told to carry out a risk assessment before reopening.

No one at the pub was available for comment, but a spokesman said on July 24: ‘Due to the overwhelming amount of people visiting the Crown and Anchor on Saturday, we have decided to close this weekend to be able to review our risk assessment in order to deal with the difficulty that we faced with social distancing.

‘By saying that we are grateful and appreciative of all our customers and want to make it a safe environment for you when we reopen next weekend. We will be posting our updated guidelines.’ 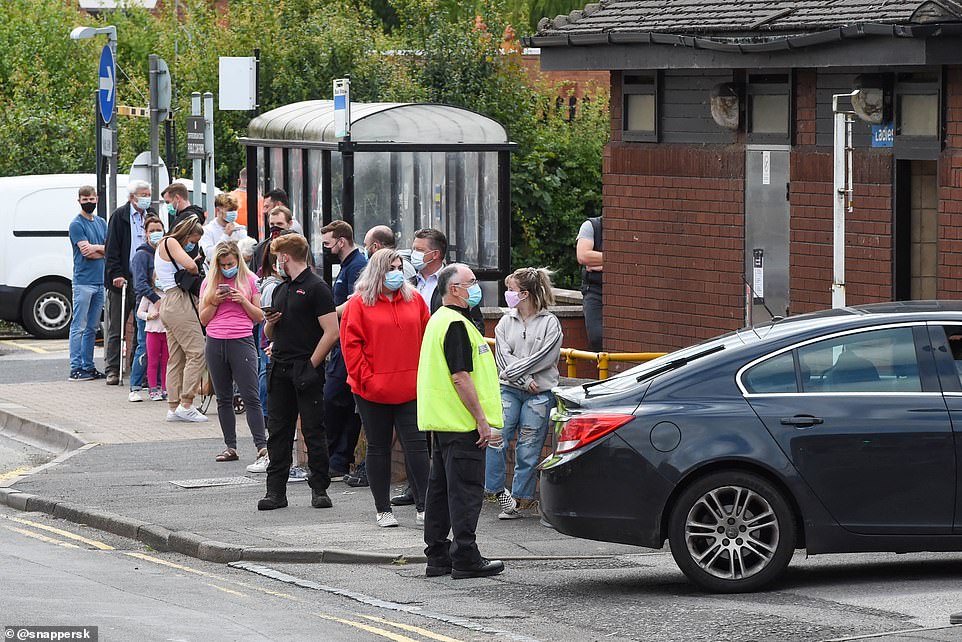 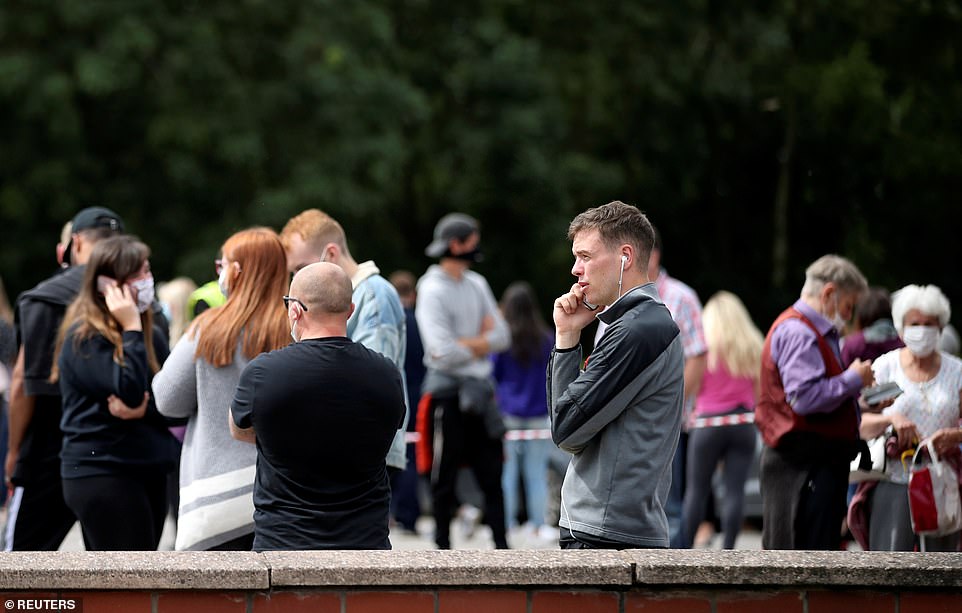 People queue near the pub today after the spike in coronavirus cases. Anyone who has been in close contact with visitors to the pub is being encouraged to have a test at a new centre 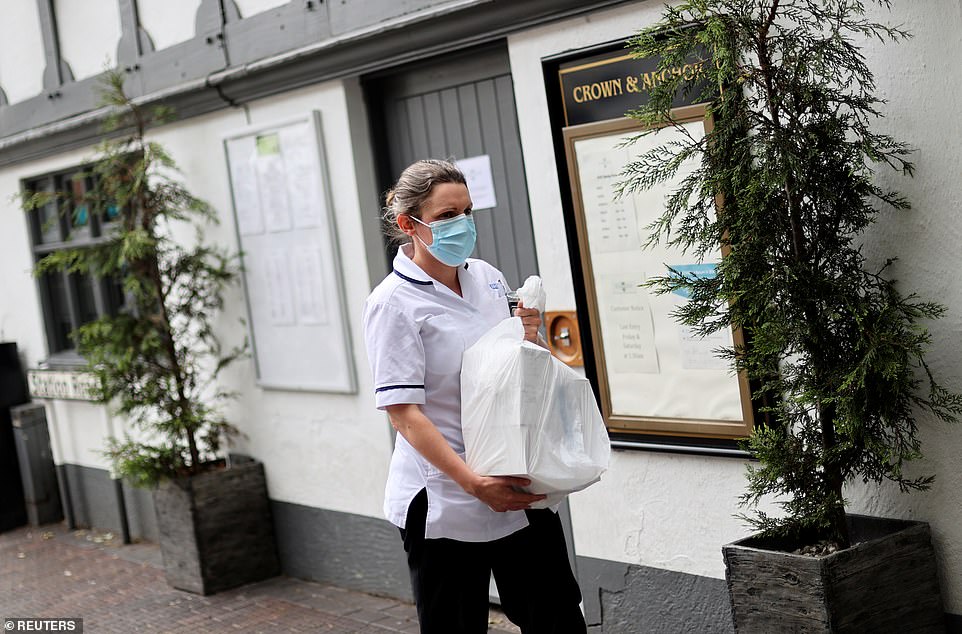 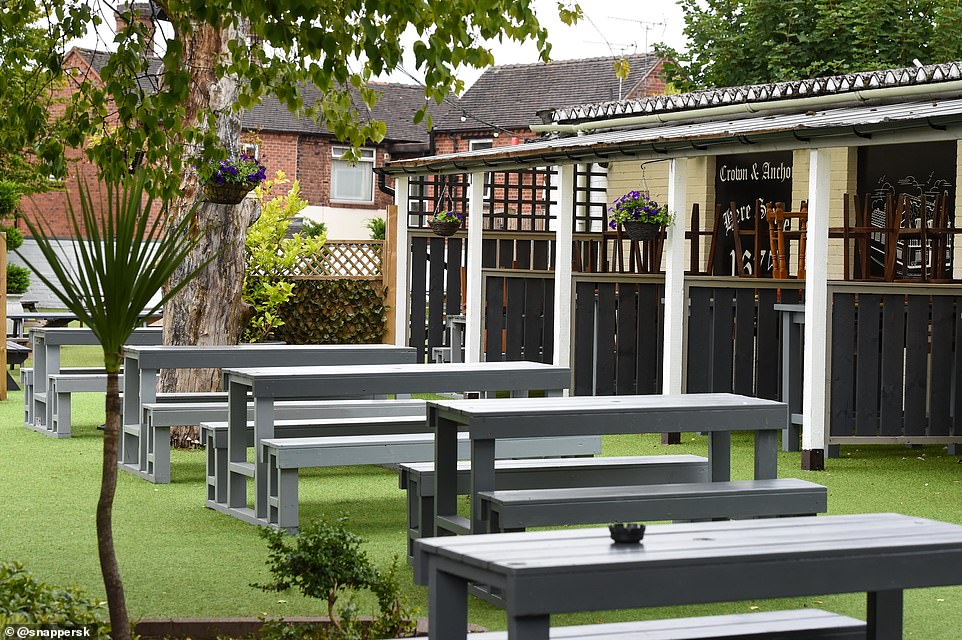 The beer garden at the Crown and Anchor pub in Stone is pictured today, following the outbreak in the town

The Crown and Anchor, which has a thatched roof, was built in 1675 and then rebuilt in 1937 after the upper part of the building was destroyed in a fire, in time to celebrate George VI’s coronation. 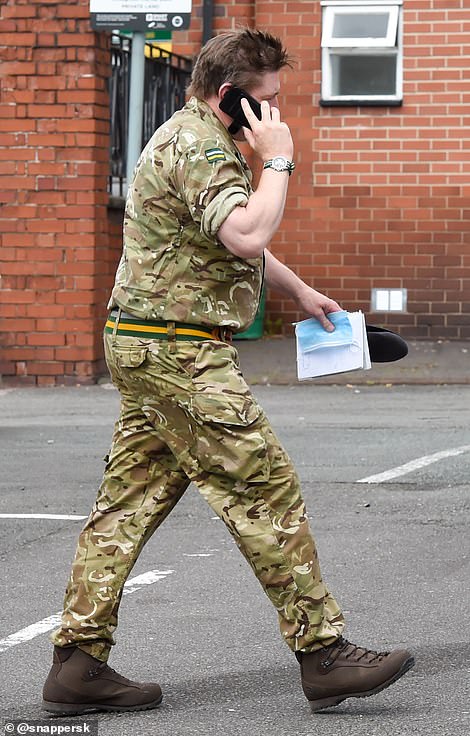 It comes as Boris Johnson fears a second wave of coronavirus could start within a fortnight. The Prime Minister is said to be ‘extremely concerned’ by outbreaks ‘bubbling up’, both at home and abroad.

Although the number of UK cases is relatively low, rises were recorded each day last week for the first time since the April peak. The seven-day average stands at almost 700 – 28 per cent up on three weeks ago.

Ministers have been warning of a potential second wave of the pandemic this winter but now fear it could come sooner. On a visit to Nottingham yesterday, Mr Johnson said Britons must not drop their guard.

Mr Johnson is said to have been spooked by the resurgence of the virus in parts of the United States and Europe following the easing of lockdown.

Meanwhile a report from MPs has condemned the Government’s ‘reckless and appalling error’ in allowing 25,000 pensioners to be discharged to care homes without testing.