Nancy Pelosi stressed Thursday that Democrats will not agree to a temporary measure for unemployment insurance benefits as negotiations close on a second week of no progress toward reaching an agreement on another coronavirus stimulus package.

‘We’re not having a short term extension,’ the House Speaker told reporters before stepping away from the podium during a Thursday briefing with Senate Minority Leader Chuck Schumer.

Schumer made a medical analogy in claiming Republicans are looking to apply a ‘bandaid’ to the economy when he claims the country really needs ‘surgery’ to get out of the hole it was dug into due to the coronavirus pandemic.

In a previous stimulus package, Americans were awarded a $600-per-week boost in unemployment benefits in the midst of the crisis as millions were left jobless due to lockdowns and other economic strife.

Republicans’ version of the next coronavirus stimulus bill, which was proposed last Monday by Senate Majority Leader Mitch McConnell, lowered the boost to $200-per-week. But Democrats said they would not budge on the $600.

House Speaker Nancy Pelosi said Thursday that Democrats will not agree to temporary measure to extend a $600-per-week boost in unemployment benefits, which expired last week, during negotiations on another coronavirus relief package 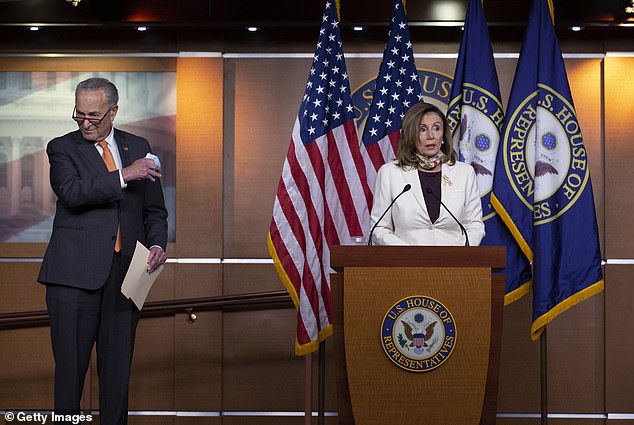 ‘We’re not having a short term extension,’ Pelosi said during a press briefing along side Senate Minority Leader Chuck Schumer, who accused Republicans of trying to put a ‘bandaid’ over the issue 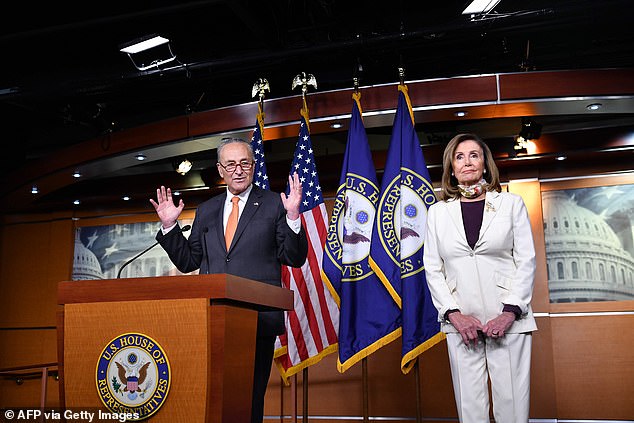 Senator Martha McSally, a Republican, proposed last week a temporary one-week extension of the benefits while negotiations continued. Democrats did not jump on board.

During talks this week, Treasury Secretary Steven Mnuchin and Chief of Staff Mark Meadows, along with Republican lawmakers, moved to meet Democrats in the middle at a $400-per-week boost.

Pelosi and Schumer said during their press conference Thursday that this was unacceptable.

‘We have said that we’re going to have the $600,’ Pelosi told reporters. ‘This is necessary.’

‘They know that we want the $600,’ she said of Republican negotiators.

Schumer added: ‘The $600 has kept, by economic estimates, at least 1 million – and probably many more – people out of poverty.’

The duo also slammed the GOP for having a ‘condescending’ perspective on Americans’ work ethic.

‘They say all these people are staying home because they get more money than if they go to work. That is not the American people I know. They want to work,’ Schumer insisted. ‘And if they have a job, or are offered a job, and with the benefits and with the dignity of work, they take it.’

Mnuchin and Meadows have repeated their argument that $600-per-week extra unemployment, on top of typical benefits, is too much.

Fiscal conservatives agree, claiming it incentivizes workers to keep collecting checks since many are making more with the enhanced benefits than they were at their pre-coronavirus jobs.

Meadows said Wednesday night that Republicans and Democrats are trillions of dollars apart in the amount of the bill’s price tag, signaling the parties are no closer to reaching a deal then they were when negotiations commenced two weeks ago.

‘We have to think big,’ Pelosi said Thursday of the next package.