School closures could reduce young people’s earning potential in the future and damage the British economy for decades to come, a report has warned.

Around a quarter of the entire workforce could have lower skills by the mid-2030s for half a century onwards, the paper from the Royal Society predicts.

This could reduce pupils’ earning potential by around 3% a year and lower the economic growth rate if action is not taken by the Government.

Schools closed their doors to the majority of pupils in March, which will mean some children in England will have been out of the classroom for nearly six months when they return full-time in September.

The report, by the Royal Society’s Data Evaluation and Learning for Viral Epidemics (Delve) group, says the Government must prioritise reopening schools in the autumn and try to keep them open in the months to come.

It calculates that 13 cohorts of students have been affected by the lockdown – and for the 50 years after the mid-2030s, around one in four of workers in the UK could have lower skills due to school closures.

Apart from the longer-term economic consequences of school closures, the immediate negative impact on children’s mental and physical health and safety will be ‘considerable’, it warns.

The paper concludes that the risk of restarting schools is not as high as many other activities, although it recognises that the evidence on the infection risk from reopening schools is limited.

When infection rates rise in some areas, schools may need to close but these decisions should be made on a school-by-school or local area basis, it says.

The report calls on the Government to suppress the virus in the wider community to reduce the risk of transmission in schools once they are at full capacity to minimise disruptions to learning.

If local outbreaks occur, other facilities where the risk of transmission is high – such as pubs, gyms or non-essential shops, should be closed before considering school closures, it says.

The Government should provide substantial extra resources to ensure schools can minimise chains of transmission – such as face coverings for teachers, older children and those with underlying health issues, regular testing, and prioritisation for vaccines for teachers, it says. 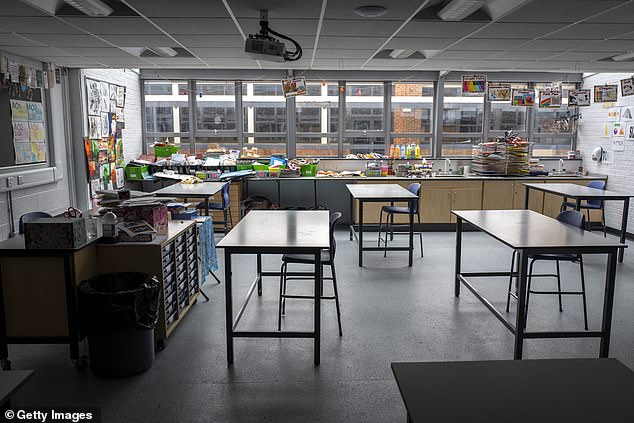 Keeping schools empty could harm pupils for the rest of their working lives. Pictured: Longdendale High in Hyde

Simon Burgess, professor of economics at the University of Bristol and a lead author on the report, said: ‘We know how damaging it is for children to miss out on school.

‘The amount of school already missed due to the pandemic could impact on their earning potential by around 3% a year throughout their lives and impact on productivity in the UK for decades.

Evidence suggests that if a student misses a third of a school year, and each year brings roughly a 10% return, their earnings potential is likely to be lower by 3% a year, the report says.

The report calls for an anonymous assessment of education achievement and pupil mental health in some schools in September to gauge the extent of the learning losses and the impact on wellbeing. 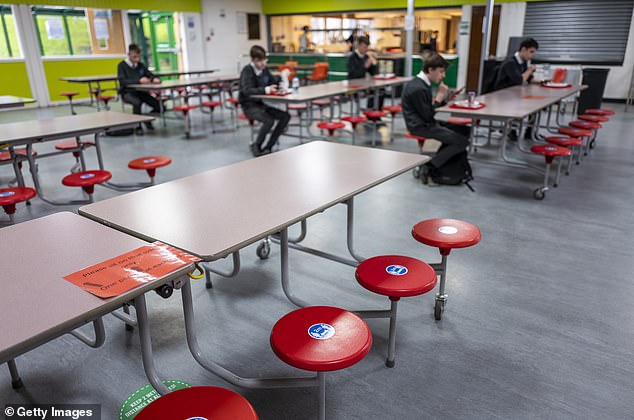 The canteen at Longdendale High in Hyde. Pupils are returning to lessons in September but face an uphill battle to catch up with time lost due to coronavirus

Anna Vignoles, professor of education at the University of Cambridge and a lead author of the report, said: ‘Shutting down schools has impacted all children but the worst effects will be felt by those from lower socio-economic groups and with other vulnerabilities, such as a pre-existing mental health condition.

‘Children from low-income households in particular are more likely to lack the resources (space, equipment, home support) to engage fully with remote schooling.

‘Those with pre-existing conditions are more likely to experience a worsening of their mental health. This has to be taken into account in how we come out of this pandemic.’

The paper comes after a separate study by the University of Southampton suggested that secondary school pupils from the most advantaged families will take six months to catch up following closure of schools, while their disadvantaged peers could take up to a year.