Coronavirus Scotland: Lockdown may ease at end of the month

Nicola Sturgeon today said Scotland could start taking ‘concrete steps’ to ease its coronavirus lockdown at the end of the month – which would be nearly three weeks after Boris Johnson triggered his exit plan.

The First Minister said she had stuck with the draconian restrictions ‘a bit longer’ to ensure that the outbreak was ‘suppressed’.

But she said she expected the ‘journey to normality’ will be able to begin at the end of May, despite warning that the disease has ‘not gone away”.

The measures – being unveiled as part of a ‘route map’ on Thursday – could be broadly similar to the blueprint published by the PM last week.

That has seen people encouraged to go back to work where possible, as well as slightly looser rules on sports and limited contact between households. 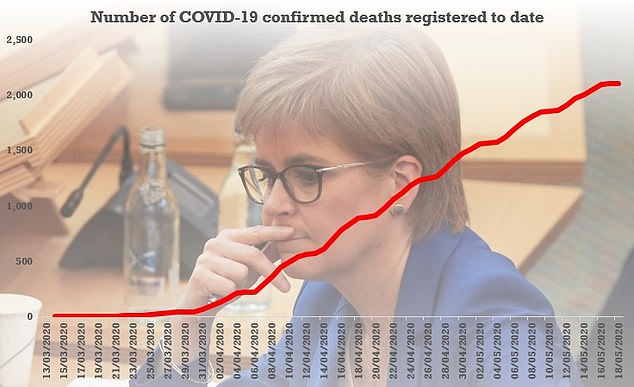 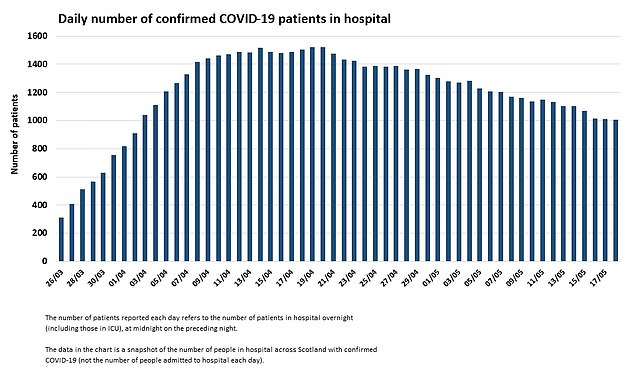 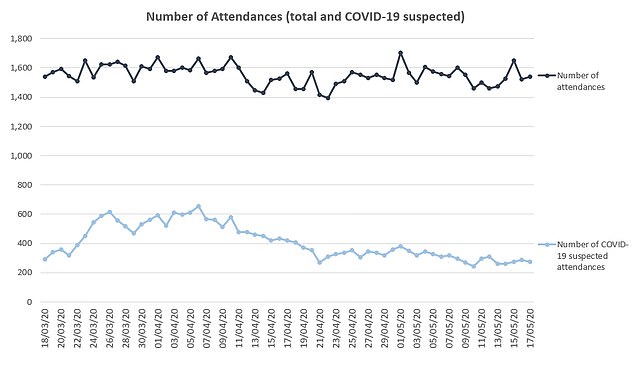 The figures released by the Scottish government today show that the death toll continues to rise, with hospital cases only declining slowly

Ms Sturgeon previously complained that abandoning the ‘stay at home’ mantra in favour of ‘stay alert’ could cost lives, and urged Scots to ignore the advice.

Speaking at her daily briefing in Edinburgh, Ms Sturgeon said anyone over the age of five with symptoms will be able to apply for a coronavirus test – although it is far from clear there will be capacity for them to receive one as patients, frontline workers, and care home residents will be prioritised.

The SNP leader said she expected to make changes to lockdown after the next review date at the end of the month.

The tweaks could include some outdoor sports being allowed, the opening of garden centres and letting people meet those from other households, provided social distancing is followed.

The First Minister also said more information will come about when schools might reopen.

‘Within two weeks, my hope is that we will be taking some concrete steps on the journey back to normality,’ she said.

‘As I’ve said before, it won’t be normality as we knew it because the virus will not have gone away, but it will be a journey to a better balance – I hope – than the one we have today.

‘As we take each step, we must make sure that the ground beneath us is as solid as possible.

‘That’s why sticking with the lockdown restrictions a bit longer to suppress the virus more is so important, because that will mean we can start to take these steps with the confidence that we have alternative means of effectively keeping it under control.’

Ms Sturgeon followed the Wesminster government in announcing that all care home residents and staff will now be routinely tested.

And she said there will now be an expansion in screening, saying that anyone over the age of five with any of the symptoms will be able to book in.

Checks will would be available at the drive-in centres across the country, or through any of the mobile testing centres, with the scheme being a collaboration between the Scottish and UK governments.

While key workers will be prioritised, Ms Sturgeon said the tests can be booked online. 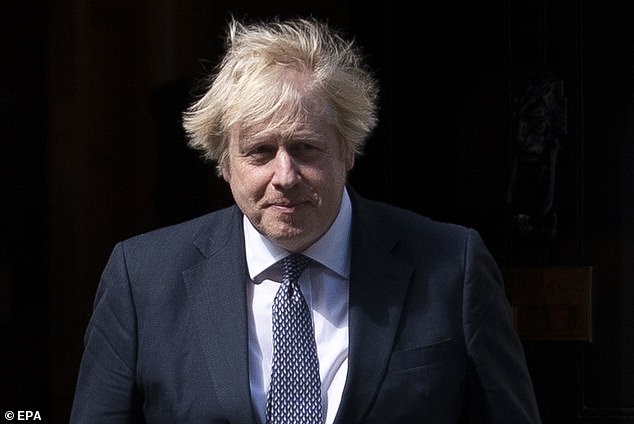 Ms Sturgeon previously complained that the decision by Boris Johnson (pictured in Downing Street last week) to abandon the ‘stay at home’ mantra in favour of ‘stay alert’ could cost lives, and urged Scots to ignore the advice