Coronavirus: Skin rashes are a symptom for one in 11 patients

Skin rashes should be added to the NHS’ official list of Covid-19 symptoms because one in 11 patients develop them, scientists say.

King’s College London academics drew on data from 20,000 Brits who either tested positive for Covid-19 or were heavily suspected of having the disease.

They found 9 per cent of infected Britons also suffered from skin rashes, while 8 per cent of people with other tell-tale symptoms also had the skin ailment.

The scientists are now calling for skin rashes to be recognised as an official symptom to prevent a substantial number of cases slipping under the radar.

The NHS currently only lists three signs of the infection — a fever, continuous cough and loss of smell or taste.

It suggests only people with these three symptoms may have Covid-19 and therefore should self-isolate and get tested.

This means Britons suffering from the virus’ less common symptoms are not getting access to swabs and may be continuing to pass the virus to others.

The UK has repeatedly been accused of playing catch up with the rest of the world when it comes to spotting Covid-19 throughout the crisis.

In the US, the Centers for Disease Control and Prevention (CDC) warns of 11 primary symptoms, including fatigue, body aches, headache, sore throat and shortness of breath — but admits the virus can cause an array of other side effects.

It comes as Britain today posted 138 more coronavirus victims as the daily fatality toll continues to drop. But other government statistics showed the average number of new cases is still higher than last week.

Skin rashes are a sign of coronavirus – and should be added to the NHS official list, scientists claim (file)

The UK has been accused of missing ‘the majority’ of Covid-19 cases because it still only recognises three tell-tale signs of the infection (the NHS website, shown)

Professor Spector and researchers from King’s College London have developed a symptom-tracking app which has seen millions of Britons sign up and report their symptoms.

The full list of symptoms, in order of how predictive they are of the disease, include:

For the latest study, KCL researchers used data from 336,837 users of their Covid Symptom Tracker app, where people report their symptoms.

The study also looked at 17,371 people who were suspected of having coronavirus but were not tested. It found 8.2 per cent reported a skin rash.

Dr Mario Falchi, who led the research, said Covid-19 patients reported suffering from the rashes for weeks — much longer than the more common symptoms.

Many viral infections can also cause the skin to break out in rashes or blotches, such as measles and shingles.

The immune system detects the virus as it travels through the bloodstream and sends infection-fighting cells to destroy the virus. However, these chemicals also cause skin inflammation, resulting in a rash.

Writing in the study, which which has not yet been published in a journal or peer-reviewed by other scientists, Dr Falchi said: ‘Covid-19 rashes may present in many forms and at different stages of the disease.

‘The heterogeneous presentations, the time delay, as well as the focus on severely ill patients during the early phases of the pandemic, led to the skin being overlooked as an important target organ for Covid-19.

‘Although, it is less prevalent than fever, it is more specific of Covid-19 and last longer.

‘An increased awareness from the public and healthcare professionals regarding Covid-19 skin changes will allow more efficient identification of new and earlier clusters of the disease.’

To investigate the different types of rashes plaguing coronavirus sufferers, the researchers surveyed 11,546 people about their Covid-related skin symptoms.

Of 694 people who had tested positive, the rash cropped up before any other symptom in 17 per cent of cases. In a fifth of patients (21 per cent of people) the rash was the only symptom. 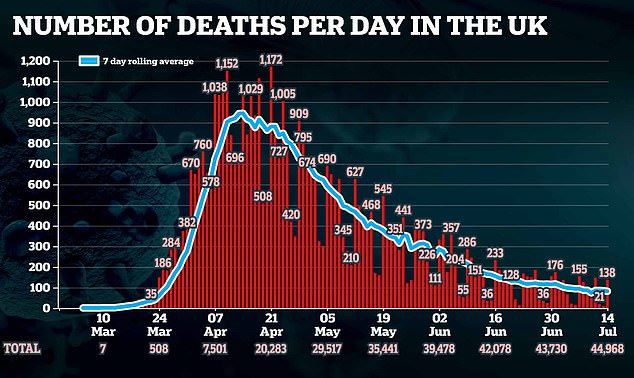 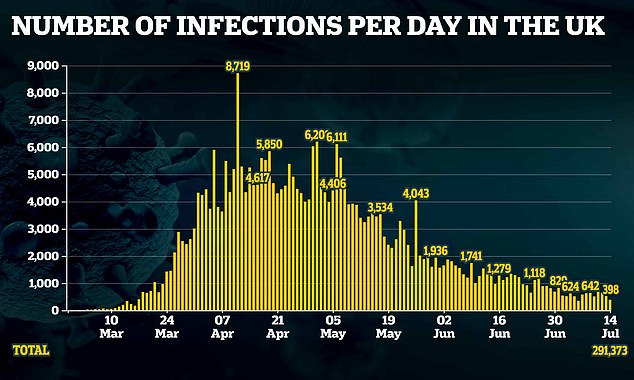 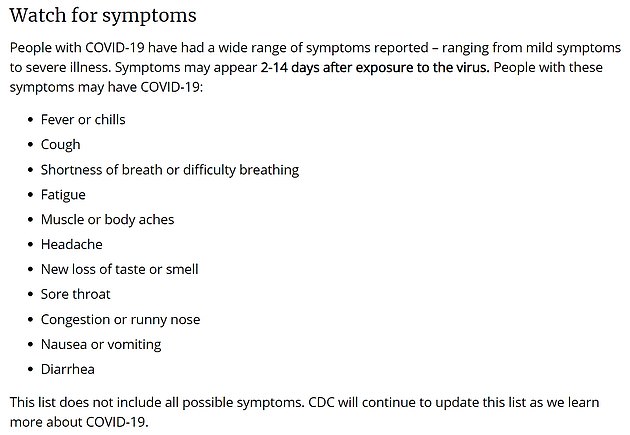 Department of Health bosses say the official death toll now stands at 44,968, with 81 Britons succumbing to the illness each day on average — down 14 per cent on last Tuesday’s 95.

Government statistics show 11 fatalities were posted yesterday but counts released on Mondays are always lower because of a recording lag at weekends. For comparison, officials posted 155 deaths last Tuesday.

The drop comes as separate promising figures today revealed the number of people dying from suspected or confirmed Covid-19 in England and Wales has dropped to the lowest levels since mid-March.

Data from the Office for National Statistics (ONS) also showed deaths are still falling in every region and that the number of fatalities from all causes has now stayed below average for three weeks.

But other Department of Health records show the number of people testing positive for the coronavirus each day is higher this week than it was last, raising fears Britain’s outbreak could be on the rise again.

Only 398 more cases were confirmed today but the rolling seven-day average stands at 597 — 4 per cent higher than last Tuesday’s 575.

The spike comes little more than a week after Britain took the first steps back to normal life, after Number 10 finally relaxed strict lockdown rules in a desperate bid to kick-start the economy.

The experts added: ‘Twenty-one percent of the SARS-CoV-2 positive surveyees presented with skin symptoms alone and would have been missed if using the NHS classic symptoms alone.’

Professor Tim Spector, an epidemiologist at KCL and the lead researcher behind the COVID Symptom Tracker app, told MailOnline last month that Britain was missing ‘the majority of cases’ because it was ‘out of line with the rest of the world’.

His symptom-tracking app has seen millions of Britons sign up and report their symptoms since the start of the crisis.

He said data — based on users who test positive for the virus — had shown the infection can cause up to 19 symptoms, and more are emerging every month.

Professor Spector warned that skin rashes appeared to be affecting around one in 10 Covid patients.

He told the Evening Standard: ‘It’s looking like it is predictive of having a positive [coronavirus] test and GPs are unaware of it, so they are sending people away, or NHS 111 is not recognising it as a possible symptom.

‘It can come two weeks after the other symptoms, or two weeks before – it’s just being missed because the public is unaware of it and doctors are unaware of it.’

It comes after the CDC in the US revised its Covid-19 symptom list on May 13 to include  three new symptoms to its official coronavirus list.

On its website, it now includes website to include diarrhoea, nausea and a runny or blocked nose, to make it easier for patients and doctors to recognise the illness.

The CDC says the 11 symptoms may appear between two and 14 days infection but adds that the list does not include all symptoms.

A footnote on the site says the CDC ‘will continue to update this list as we learn more about Covid-19’.

Meanwhile, the NHS website only lists three main symptoms and makes no reference to the fact the disease can cause an array of side effects.