Coronavirus stimulus ‘may not happen’ if not reached by Friday

President Donald Trump on Wednesday threatened Democrats with executive action if there isn’t a deal on the coronavirus relief package by Friday after another day of talks ended on Capitol Hill with no end in sight.

‘We’ve been negotiating in good faith with Democrat leaders in the House to extend relief payments. We are negotiating right now as we speak, and we’ll see how it works out. If Democrat leaders put partisan demands aside, we would reach an agreement very quickly. It would happen very quickly. In the meantime, my administration is exploring executive actions,’ Trump said at a press conference at the White House.

The administration used the threat of action on two stand alone issues that are part of the hold up in negotiations: unemployment benefits for 30 million workers that lapsed last week and a moratorium on evictions.

But President Trump also threw in the possibility he would include a limited suspension of the payroll tax in his executive orders.

‘Eviction is a big problem,’ the president noted. ‘Very unfair to a lot of people. It wasn’t their fault that this virus came from a faraway land. As well as additional relief to those who are unemployed as a result of the virus. Very importantly I am also looking at a term limited suspension of the payroll tax.’

Democrats and even some Republicans oppose such an idea, which would cut the taxes American workers pay into Social Security and Medicare – two of the most expensive government programs on the books.

White House Chief of Staff Mark Meadows has given Democrats a Friday deadline to come to the table with a deal.

‘By Friday if we haven’t made significant progress and we’re just too far apart, the president’s prepared to take executive action,’ he told CNN on Wednesday after he and Treasury Secretary Steven Mnuchin concluded another round of talks with Speaker Nancy Pelosi and Senate Democratic Leader Chuck Schumer.

‘If Congress can’t get it done, the president of the United States will,’ he threatened.

But the White House is still struggling to explain how it would legally enact such orders. Meadows said officials are talking with ‘legal counsel and getting opinions on that.’

The four negotiators walked out of Pelosi’s ornate speaker’s office on Capitol Hill Wednesday evening with no developments after three days of intense negotiations. The same group also met nearly every day last week but there is no timetable for when a deal may be struck.

‘I feel optimistic there’s light at the end of the tunnel but how long that tunnel is, is yet to be seen,’ Pelosi said.

Schumer said Democrats won’t ‘walk away’ until a deal is in sight but admitted the two groups were ‘there are wide differences in certain areas’ particularly when it comes to money.

Republicans have offered enhanced unemployment benefits at $400 a week, up from the $200 they originally offered. But Democrats want to reauthorize the original amount of $600 a week. Also on the table is funding for states and cities whose budgets were hit hard by the coronavirus pandemic.

Meadows said Wednesday that if a compromise is not reached by Friday on the next coronavirus relief package then there won’t be a deal on the bill at all as lawmakers on Capitol Hill set an end-of-week deadline.

‘I’ve become extremely doubtful that we’ll be able to make a deal if it goes well beyond Friday,’ the White House Chief of Staff told reporters at the Capitol Wednesday afternoon.

‘Just because we’ve been spending so much time together that if you’re not making progress, there’s no sense to continue,’ he continued.

Meadows made yet another trip to the Capitol on Wednesday afternoon with Treasury Secretary Steven Mnuchin after the dup have spent the last week-and-a-half negotiating with Democrats and Republicans on the specifics of the next package.

While Mnuchin is keen on making a deal with Democrats, which he has already done twice on behalf of the White House during coronavirus stimulus talks, Meadows is ready to push through executive actions that he feels could achieve some of the same ideas as the GOP-version of the bill.

When asked if the president will issue any executive orders on the matter if a deal is not reached, Meadows says that is still an option on the table.

‘The president continues to look at executive action on a variety of issues that are affecting those who have economically been impacted by the COVID-19 virus,’ the chief of staff said. ‘I don’t know I would put them necessarily on the timeline you outlined.’

White House Chief of Staff Mark Meadows (left) said if a coronavirus stimulus deal is not reached by Friday, there likely won’t be another $1 trillion-plus bill 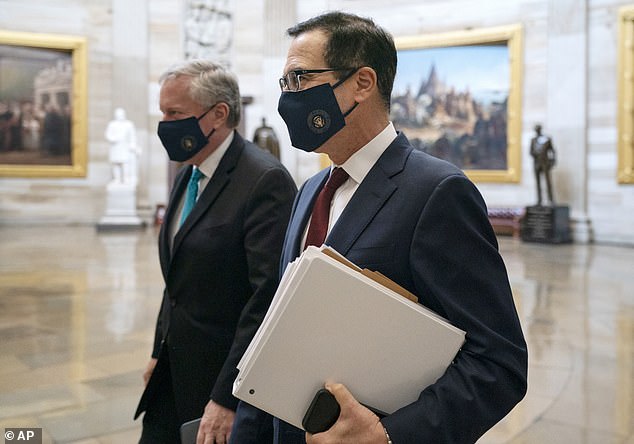 Senate Minority Leader Chuck Schumer didn’t seem optimistic that a deal would be reached by the end of the week.

‘We’re working very hard but we’ve got a lot of issues – the difference,’ he told reporters on Capitol Hill.

‘We see the problem as bigger, bolder and requiring more action than they do,’ he added.

White House Press Secretary Kayleigh McEnany said Tuesday that Democrats are not serious about negotiating a deal on the next coronavirus stimulus bill as she claims they refuse to make concessions and have increased the total price tag for the next legislation.

‘The ball is in their court here,’ she said of Democratic leaders. ‘We’ve made at least four offers, they’ve made zero offers. It’s unacceptable for hard-working Americans.’

Trump said during a coronavirus press briefing on Tuesday evening that Democrats just want additional funding for their states, which is why he claims they won’t budge on certain measures.

Democrats are demanding $1 trillion be allocated for state and local governments, even though that is the total price of the GOP-proposed package.

‘We’re talking with the Democrats – they seem to be much more interested in solving the problems of Democrat-run states and cities that have suffered greatly through bad management,’ Trump told reporters.

‘They’re looking for $1 trillion to help out with cities that are run by Democrats, in some cases radical left Democrats that have not done a good job,’ he continued in insisting their priorities are not on making a fair deal.

Following Capitol Hill meeting, Meadows revealed that Republicans did make more concessions in negotiations with Democrats than the opposition party was willing to make. 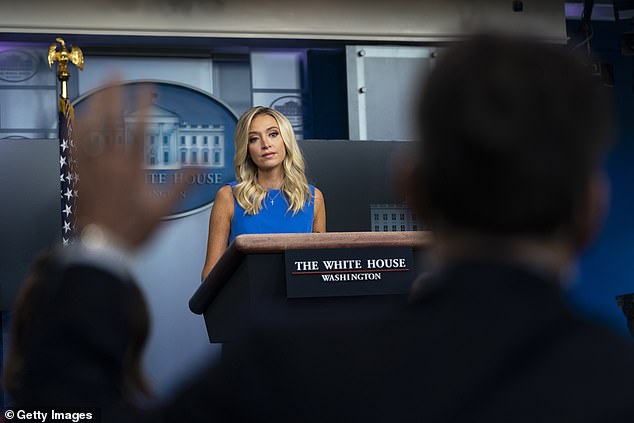 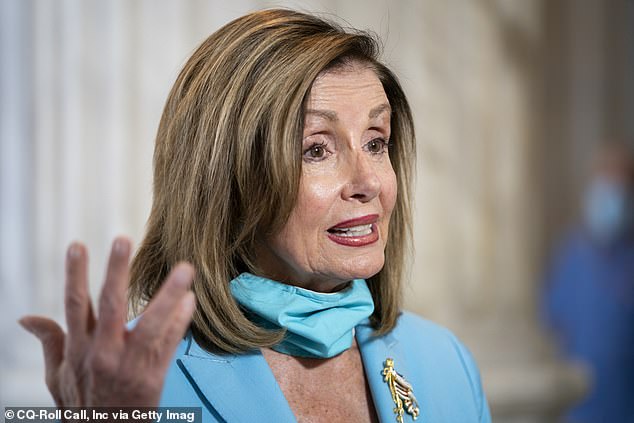 Her claims comes after Democrats, led by Schumer and House Speaker Nancy Pelosi are now demanding the Democratic package price tag be upped to $3.4 trillion from the previous $3 trillion

‘Right now the Democrats are being fundamentally unserious,’ McEnany lamented. ‘They’ve offered no concessions, they’ve offered no plans. If anything, they’re moving the opposite way. And to demonstrate their unseriousness, their $3 trillion plan, they’ve now said, ‘Oh, needs to be $3.4 trillion.”

Pelosi suggested Monday night that a deal won’t be reached until next week at the earliest – meaning jobless Americans will go at least two weeks without enhanced unemployment benefits.

McEnany also blamed Democrats for Americans losing out on the benefits, claiming they would not agree to a compromise detailed by Republican Senator Martha McSally that would extend the $600-per-week unemployment boost by a week while negotiations commenced.

‘Democrats, as I noted on Friday, were offered the Marth McSally bill, which would have been extending unemployment insurance for at least seven days while these negotiations continue,’ she said. ‘That was rejected by Chuck Schumer, which should tell you exactly where Democrats stand and it’s against hard-working Americans who lost their jobs through no fault of their own.’

Meadows and Mnuchin have spent the last two weeks at the Capitol engaging in talks with Democrats and Republicans – and they are on the Hill again Tuesday afternoon to attempt to reach a compromise.

They first attended the Senate GOP lunch, before heading into negotiations with Pelosi and Schumer, which will be followed by a meeting with Senate Majority Leader Mitch McConnell, who has remained largely silent on the matter of another sweeping coronavirus stimulus bill.

Despite several meetings over the last two weeks between Schumer and Pelosi with Mnuchin and Meadows, the four have not reached an agreement on a single issue.

Pelosi told Democratic colleagues during a call on Monday that they had not been able to reach an agreement on the price tag for the fourth sweeping coronavirus package, but claimed Republicans will come their way on the bill, claiming they just don’t ‘know it yet.’ 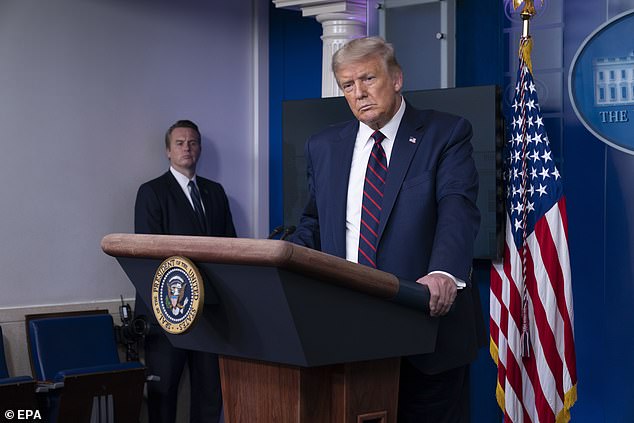 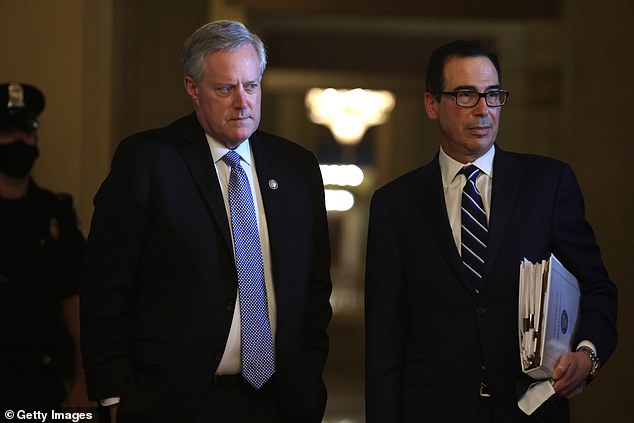 The California congresswoman proposed her HEROs bill last month, which includes $3 trillion in relief and economic stimulus, but the Republican HEALs bill has a total cost of $1 trillion – the amount Democrats want to go to state and local governments.

She also said GOP figures will not concede to giving any money to state and local government to mitigate the virus and claims her desire to enhance federal food stamp programs in the bill is ‘not where we need.’

One of the biggest issues for Americans, however, is the expiration of enhanced unemployment benefits of $600-per-week, which expired on Friday with no new deal on the table.

McConnell, from the Senate floor last Monday, detailed the the GOP-proposed bill included a decrease in benefits from the $600 boost to $200-per-week. The boost would then be phased out, in the Republican plan, then capping unemployment benefits at 70 per cent of the individual’s pre-coronavirus wages.

Democrats want to keep the $600 boost, which was included as part of a previous coronavirus relief package but had an expiration date.

Pelosi claimed during the phone call Monday that neither side is willing to budge on unemployment benefits.

On Sunday, Pelosi said, ‘The fact is we will be close to an agreement when we have an agreement,’ and is now claiming that might not happen until next week at the earliest.

This means Americans who have lost their job in the midst of the coronavirus pandemic will go without their enhanced unemployment benefits for two weeks, at minimum. 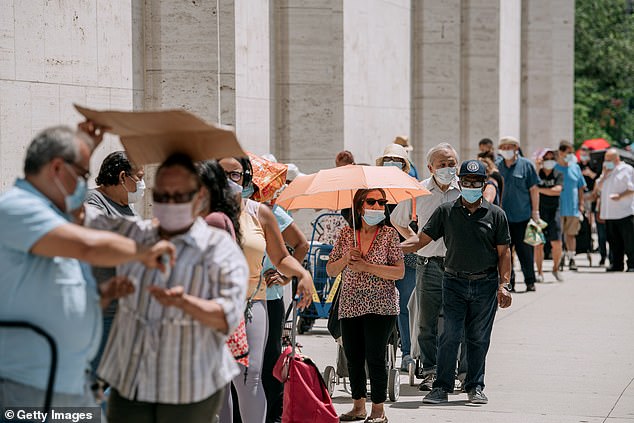 The negotiation stalemate comes as $600-per-week enhanced unemployment benefits expired Friday, meaning those left jobless in the midst of the pandemic will lose thousands of dollars if a stimulus deal is not reached soon

President Donald Trump said last week that he wants a bill to get passed that includes an unemployment benefits enhancement, just at a lower amount than the previous boost, and allocates $105 billion for schools to help them reopen in the fall. 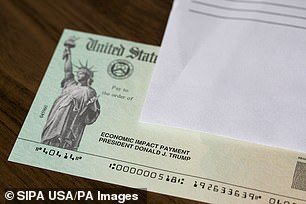 Republicans proposed in their bill another round of $1,200 checks for Americans

He also wants to issue another round of $1,200 checks to Americans like the one sent out earlier this year.

Meadows and Mnuchin have been negotiating on behalf of the president on Capitol Hill, and while the Treasury secretary is more keen on negotiations – as he has successfully reached two deals with Democrats already – Meadows has grown tired of talking.

Meadows signaled that he will give negotiations another 24 hours and then will push for the president to sign a series of executive orders that solve some of the issues on the table and declare a victory for Trump.

Republican Senator John Cornyn, who is up for reelection in November, suggested Monday that the Senate cancel its August recess to get more work done.