Coronavirus UK: 220k in England may be infected currently

Up to 222,000 people in England may be infected with the coronavirus right now, according to a government testing survey, while scientists estimate that a third of the population have already had it and recovered.

The first round of random public testing has identified only 33 positive cases of COVID-19 out of a sample of 10,705 people and estimated a national infection level of 0.27 per cent – one in every 370 people.

And the rate of infection is six times higher in healthcare workers and carers than it is in the general population, the survey found. While 1.33 per cent of people who worked in patient-facing roles in hospitals or homes tested positive for the virus, only 0.22 per cent of those with other jobs did so.

Numbers announced today did not include anyone who was tested in a care home or a hospital, where the statisticians said ‘rates of COVID-19 infection are likely to be higher’.

The 33 people who tested positive came from 30 different households, suggesting they either lived alone or most had managed not to infect the people they lived with. It is not known whether the people had realised they were ill before they were tested. The same households will be tested regularly to watch how the numbers change.

The survey, of which this is the first set of data, will be ongoing as part of the Government’s ‘test, track and trace’ plan for getting out of lockdown.

It will be expanded over time from the 5,276 households which were included in today’s data to 10,000 homes in the coming weeks. Anyone aged over two in an enrolled household will complete a nasal swab and return it for testing.

The statistics come as a study from the University of Manchester has predicted 29 per cent of everyone in Britain – more than 19million people – has already had the infection and recovered.

The Office for National Statistics estimates that somewhere between 94,000 and 222,000 people in England currently have the coronavirus, putting their average estimate at 148,000. This represents 0.27 per cent of the population, and means approximately one in every 370 people is carrying the virus 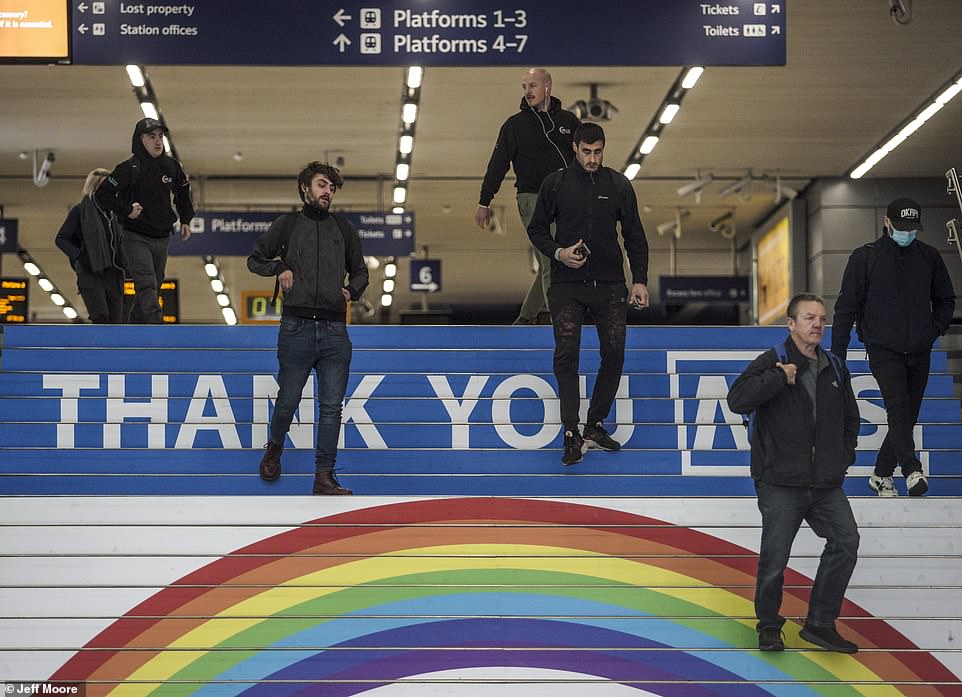 Commuters have this week returned to work after Prime Minister Boris Johnson announced plans on Sunday to start loosening lockdown restrictions (Pictured: People walking through a train station in London decorated in tribute to the NHS)

The data from the ONS showed that people’s age did not appear to have any bearing on how likely they were to be diagnosed with the virus.

If everyone in the country was able to be tested it could be expected that between one in every 250 and one in every 588 people would test positive. It is impossible to be certain because the sample size is small.

It added: ‘All estimates are subject to uncertainty, given that a sample is only a subset representation of the wider population. However, confidence intervals provide us with a range of values that we believe contain the unknown true number of cases testing positive for COVID-19 infection.

The figures come as a study from the University of Manchester today claimed nearly one in three Britons has already been infected with the coronavirus.

The first scientific study to analyse case rates at local levels estimated 29 per cent of the UK population had already had the illness by April 19, just 10 days after the peak of fatalities in NHS hospitals.

The academics who led the research said the finding confirms that the majority of sufferers have mild or no symptoms, and are unaware they have been infected.

The analysis suggests unreported community infection is more than 200 times higher than official Government figures, which have so far only picked up 233,151 positive cases of the virus.

But the scientists say the fact a quarter of Britons may already be immune to the illness provides ‘light at the end of the tunnel’ for coming out of lockdown.

Experts believe that at least half the population – potentially around 60 per cent – will need to have recovered from the virus for herd immunity to start to take effect, in which people would be protected by the fact that the virus cannot spread through people who have had it already.

Lead researcher Dr Adrian Heald, of The University of Manchester, said: ‘COVID-19 is a highly infectious condition. It is very dangerous for a small group of people.

‘However a much larger group seem to have low or no symptoms and have been unreported. This study tries to provide an estimate of the number of historic infections and gives us all a glimmer of hope that there may be light at the end of the tunnel.

‘We show how effective social distancing and lockdown has been. Though this is a tragedy, it could have been far worse.’ 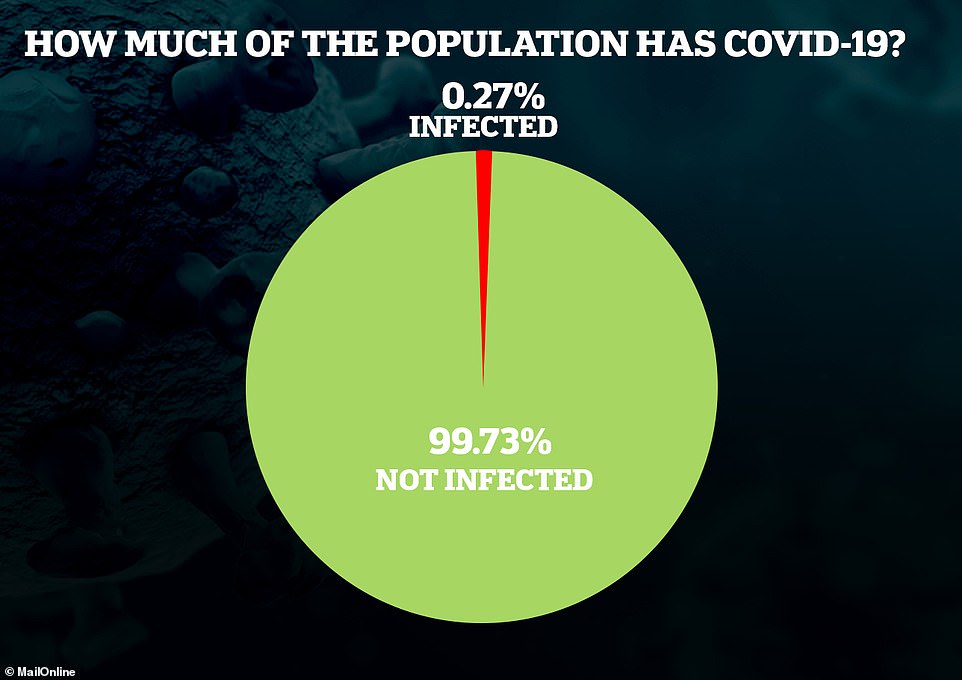 England’s top statisticians estimate that 0.27 per cent of the population has been infected with COVID-19 on any given day over the past fortnight – equal to around 148,000 people and certainly between 94,000 and 222,000 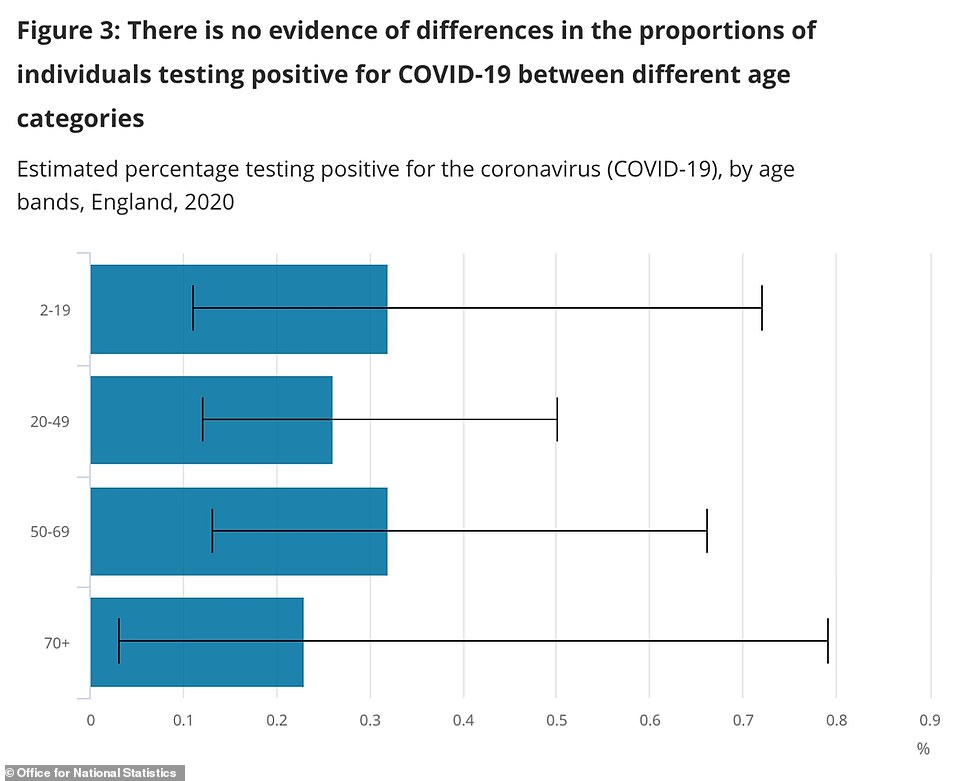 Office for National Statistics data suggests there is no significant difference between infection rates across age groups. It is impossible to draw definitive conclusions, however, because only 33 people tested positive across all ages combined

The researchers made their estimate after analysing published local authority data in 144 regions in the UK.

This enabled them to calculate the R-value – the average number of people each COVID-19 patient infects – within each local authority area.

They believe each COVID-19 patient infected 2.8 others before the country went into lockdown on March 23.

Only 4.4% of French population infected by coronavirus

A mere 4.4 per cent of the French population – or 2.8 million people – have been infected by coronavirus, a study led by the Pasteur Institute says.

Published on Wednesday in the journal Science, researchers say the infection rate in the worst-hit parts of France – the eastern part of the country and the Paris region – is between 9 and 10 per cent on average.

‘Around 65 per cent of the population should be immune if we want to control the pandemic by the sole means of immunity’, the study says.

The rate of infection was measured by the Pasteur Institute as of May 11, the day when France started to unwind its almost two-month-long national lockdown.

‘As of a consequence, our results show that, without a vaccine, the herd immunity alone will not be enough to avoid a second wave at the end of the lockdown. Efficient control measures must thus be upheld after May 11’, researchers say.

Herd immunity refers to a situation where enough people in a population have immunity to an infection to be able to effectively stop that disease from spreading.

France’s overall death toll from the virus rose to 27,074 on Wednesday, the fifth-highest in the world, and total number of cases officially stood at 177,700, the seventh-highest total.

The Pasteur Institute also said the lockdown put in place on March 17 in France led to a drastic decline of the coronavirus’ reproduction rate, going from 2.9 to 0.67 over the 55-day virtual standstill of the country.

A Spanish study also published on Wednesday showed similar results, saying about 5 per cent of the country’s population had contracted the disease and that there was no herd immunity in Spain, also emerging progressively for long lockdown.

But they say the reproduction number is now 0.9 or below in every corner of the country thanks to social distancing and the natural consequences of cumulative community infection.

It is vital that this number stays below 1, otherwise the outbreak will start to rapidly spiral again as people infect others around them at a faster rate.

The study, published in the International Journal of Clinical Practice, was carried out by a team from the University of Manchester, Salford Royal Hospital and analytics company Res Consortium.

Dr Heald, who is also a consultant at Salford Royal NHS Foundation Trust, added: ‘We also demonstrate that like any virus, COVID-19 has taken its natural course and infected a significant percentage of the UK population.

‘The more people that are exposed to this – or any – virus, the less easy it is for further transmission to occur.

‘The social and economic impacts of Lockdown have been very difficult. But we believe this analysis may aid policy makers in a smoother transition to reducing social containment and sustainably managing the COVID-19 disease.’

Dr Heald added: ‘This will allow policy makers to avoid a ‘one size fits all’ approach to pandemic policy.

‘That does not consider the variation in both infection rates and impact across localities.’

Mike Stedman, from Res Consortium, said: ‘Using our experience working with the NHS on improving patient services, we conducted this work in our own time.

‘We felt we could make a valuable contribution to the public and policy makers by calculating the progression in the local and national daily infection rate.

‘The figures are not perfect, with the numbers of severely ill patients as a proportion of the total cases being used as a market for estimates of wider infection.

‘Only extensive antibody testing could give us a more accurate picture. But as that is only just becoming available, we believe this form of modelling is important in informing the best approach to unlocking the population.’

Dr Heald and Mike Stedman argue that incremental lifting of current social restrictions as soon as possible is vital to minimise further damage to the economy and the impact of prolonged social containment.

However, they add, this must be balanced against containing the current pandemic and minimising future waves of infection.