Another 79 people have died of the coronavirus in Britain, according to early statistics for today, taking the total to 45,501.

NHS England said another 10 people have died in its hospitals, while Public Health Wales recorded one death and neither Scotland or Northern Ireland had any.

Government statistics show that the number of people dying with Covid-19 is continuing to tumble, with the daily average now 65 over the past week.

Yesterday there were 110 more deaths confirmed by the Department of Health.

New cases are declining less forcefully – the seven-day average has been rising this week and stands are 635, with 445 cases diagnosed yesterday. The increasing average could be a result of more targeted testing rather than more infections.

As Britain’s Covid-19 outbreak continues to fade away, the Department of Health today announced that care homes in England will be allowed to reopen for visits for the first time.

Homes now have the green light to work with local authorities and set up visiting systems that allow residents to have one ‘constant visitor’ each who will be able to pop in regularly provided they book in advance and wear face coverings.

Health Secretary Matt Hancock said: ‘I know how painful it has been for those in care homes not being able to receive visits from their loved ones throughout this period.’ 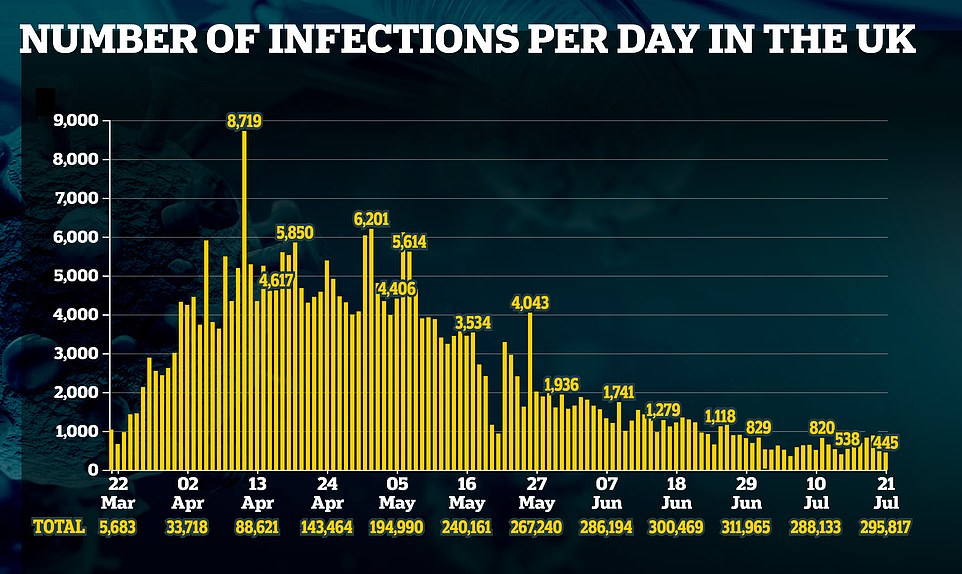 Data from Office for National Statistics yesterday showed that nearly three times as many people are now dying from the flu and pneumonia than coronavirus in England and Wales.

Covid-19 fatalities have dropped to the lowest levels since well before lockdown, with 283 people succumbing to the life-threatening infection in the week ending July 10.

Britain’s coronavirus outbreak may be growing as figures yesterday revealed the average number of daily cases had risen for the fifth day in a row for the first time since April.

Department of Health bosses posted 445 more Covid-19 cases — taking the rolling seven-day mean of infections to 635 after the rate dropped to a four-month low of 546 on July 8.

Government statistics show the last time the average rose for at least four days in a row was on April 11, when the number of infections began to slow down before plummeting at the end of May and in June.

But it takes patients weeks to die from Covid-19, on average, meaning officials can’t rule out a blip in the figures or confirm the outbreak has worsened since ‘Super Saturday’ for at least another week.

And hospital admissions — another indicator tracking the crisis — have yet to spike despite fears of an inevitable surge prompted by millions of people flocking to pubs to enjoy their freedom on July 4.

Number 10’s scientific advisory panel last week admitted the outbreak is shrinking at a slightly slower speed and separate official figures suggested up to 2,000 people were still getting infected each day in England alone.

By contrast, 418 coronavirus deaths were recorded in England and Wales in the seven-day spell before that, and more than 8,000 were registered during the worst week of the crisis in April.

Yesterday’s was the lowest figure since the week ending March 13, 10 days before Prime Minister Boris Johnson announced the draconian measures to curb the spread of the virus.

For comparison, 917 influenza and pneumonia deaths were registered in the same week. The number of Covid-19 deaths registered — which is always slightly higher than how many occurred — in the same time-frame was 366.

Most recent data from the Office for National Statistics (ONS) also show the number of fatalities has fallen in all regions of England and Wales as the virus continues to peter out in the UK.

And deaths of any cause are now the lowest they have been all year, with promising statistics showing the number of fatalities has been below average for the past four weeks in a row.

ONS experts explained that Covid-19 likely sped up the deaths of people who would have died of other causes, meaning the year’s fatalities have been front-loaded. As a result, fewer people are now dying of causes such as heart disease and dementia because they have already succumbed to the coronavirus.

Separate data last week showed infection levels in the UK have stabilised and scientists suggest the death rate may fall because of warmer weather. There are growing concerns, however, that the virus could return and cause more death and disease in the winter when people are more susceptible.

The Government today announced that people living in care homes in England will be allowed family visits again for the first time since lockdown started in March – but residents will be limited to just one visitor each.

Health Secretary Matt Hancock has given care homes the green light to start arranging visits as long as social distancing and protective equipment rules are followed.

But each resident will only be allowed a single nominated visitor who can visit regularly as long as they book in advance and wear a mask and extra PPE if required. 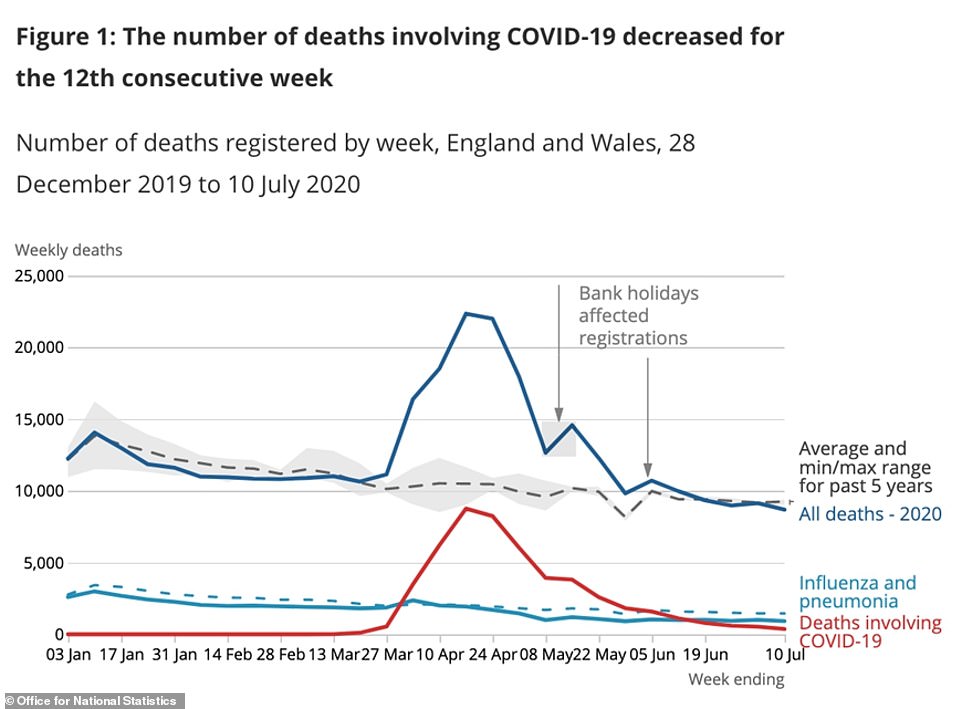 The much-anticipated move brings England in line with Scotland, Wales and Northern Ireland, which have been allowing visits in care homes for weeks.

Local councils and public health officials in England will decide on a case-by-case basis which homes will be able to reopen, depending on levels of coronavirus in the area.

Mr Hancock said: ‘I know how painful it has been for those in care homes not being able to receive visits from their loved ones throughout this period.

‘We are now able to carefully and safely allow visits to care homes, which will be based on local knowledge and circumstances for each care home.

‘It is really important that we don’t undo all of the hard work of care homes over the last few months while ensuring families and friends can be safely reunited so we have put in place guidance that protects everyone.’

Data compiled by the statistical bodies of each of the home nations show 56,093 people died of either confirmed or suspected Covid-19 across the UK by the end of May.

The Office for National Statistics yesterday confirmed that 51,096 people in England and Wales died with confirmed or suspected Covid-19 by July 10.

National Records Scotland — which collects statistics north of the border — said 4,173 people had died across the country by June 22.