The UK has announced 338 more victims of the coronavirus have died in its hospitals, taking the total death toll to 36,042.

Another 2,615 people have also been diagnosed with COVID-19, meaning more than a quarter of a million Britons have now tested positive for the illness (250,908).

NHS England today confirmed 187 more people – including a 14-year-old – died in its hospitals between March 29 and May 20. A further 37 more fatalities were confirmed in Scotland today, along with nine in Wales and seven in Northern Ireland.

It comes as data shows two weeks have now passed since London diagnosed more than 100 COVID-19 cases in a day.

Fewer than 100 people have been diagnosed with the coronavirus in the capital for almost a fortnight since May 7, when there were 149 new cases.

The promising figure shows a staggering drop from the peak of the outbreak when, on the city’s worst day on April 2, 1,024 people tested positive for the disease.

By comparison on May 15 – the latest date for which data are reliable, 52 people were found to have the disease. This is despite a marked increase in testing capacity.

And Professor Carl Heneghan, a University of Oxford epidemiologist who has been tracking the outbreak data closely, said 30 per cent of NHS hospitals haven’t recorded a single COVID-19 fatality in the past two days.

He said all signs point to the coronavirus ‘disappearing at a rate that’s speeding up, which is highly reassuring’.

Yesterday, when 363 deaths were announced by the Department of Health, marked the lowest mid-week death toll for almost two months, since March 25.

The total death toll for the UK yesterday (363) was the lowest mid-week number for almost two months, since March 25 – the week lockdown began. Experts say almost a third of hospitals have not reported COVID-19 deaths for two days or more 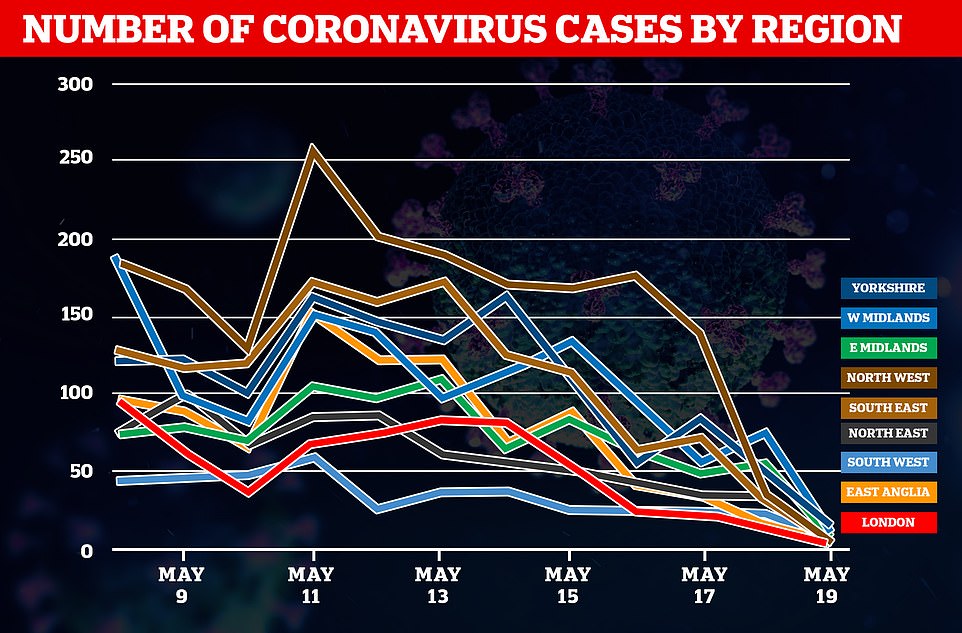 Speaking on BBC Radio 4 this morning Professor Heneghan said at least six hospitals in the city have recorded no deaths in the past 48 hours.

HOW HAS LONDON’S CASE COUNT FALLEN?

A total of 26,579 people have tested positive in the capital and 5,819 of them have died in hospitals.

Professor Heneghan and colleague Dr Jason Oke have analysed statistics and found that six hospital trusts in London had reported no COVID-19 fatalities in the 48 hours up to today, Thursday May 21.

And across England, 31 per cent of all major hospital trusts have not recorded deaths during the same period – 41 out of 131.

Sadiq Khan, the mayor of London, said he was feeling ‘very cautious’ about the news.

He told the Today programme: ‘The virus is still out there. But what this good news – and it is good news – does give us is a window of opportunity to begin the test, trace, isolate and support programme which we so desperately need.

‘We know that test, trace, isolate works best where numbers are low…