Dr David Nabarro, a World Health Organization coronavirus expert, conceded that ‘everybody has got to have fun’ after more than 100 days of lockdown.

But he warned clusters of the virus will inevitably break out if Britons can’t obey social distancing while enjoying their newfound freedoms as pubs, restaurants and holiday destinations reopen.

The ‘one metre plus’ rule was left in tatters on ‘Super Saturday’ when jubilant drinkers called time on lockdown and descended on the nation’s pubs.

Cities across Britain were heaving on a scale not seen since Boris Johnson ordered bars to close in a desperate bid to control Covid-19 on March 23.

Drunkenness, brawls and vomiting returned to the country’s nightlife, with millions of pints poured on the long-awaited night of heavy drinking.

Photos from Soho in central London showed hundreds of young people packed shoulder-to-shoulder in the streets late into the night.

And Dr Nabarro echoed the concerns, warning any future spikes will ‘quickly remind us that we are going to have to be more careful’. 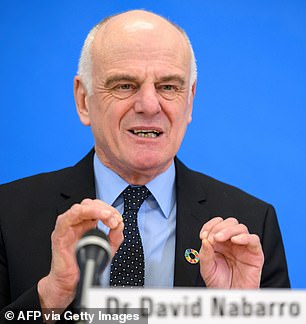 Discussing the threat of more waves of Covid-19, he told Sky News: ‘So, OK, perhaps for the time being people are taking it lightly.

‘But if we do [take it lightly], as I suspect we might, then some big outbreaks [are] coming up in the next few weeks.’

Dr Nabarro begged young people to not treat the virus ‘lightly’, warning they could ‘easily give it to somebody else who then goes and dies’.

And he urged Britons to ‘stay on guard’ and take the threat of the dangerous virus seriously.

Dr Nabarro said: ‘It would concern me hugely if I felt there was a whole generation of people who were just not doing so.’

On Friday the Prime Minister pleaded with millions of Brits to be ‘sensible’ on ‘Super Saturday’, warning the ‘vicious’ disease is ‘still out there’.

He said the government ‘will not hesitate in putting on the brakes’ and threatened to reimpose lockdowns on a region-by-region basis if outbreaks spike.

In a clear message begging Britons to behave, Mr Johnson said local Leicester-style measures will be a ‘feature of our lives for some time to come’.

But his message fell on deaf ears across parts of the UK, with parks and open areas cramped with revellers unconcerned about the threat of a second wave.

Police shut down raves across London on Saturday night as Brits finally freed from lockdown restrictions cast social distancing aside and partied into the early hours.

Large areas of northeast London were put under ‘dispersal orders’ by police as they battled to shut down a series of illegal music events.

Elsewhere, a market town 15 miles south of Leicester turned into a ‘war zone’ after it was invaded by hundreds of locked down residents desperate for a night out.

It came as a busload of Leicester City fans who went up to Nottingham to watch the match with Crystal Palace on Saturday afternoon.

Police already feared being overrun by out-of-town drinkers when pubs reopened on Saturday.

Leicester mayor Sir Peter Soulsby claimed that Leicester pub fans in search of a pint ‘could drive to Market Harborough’. 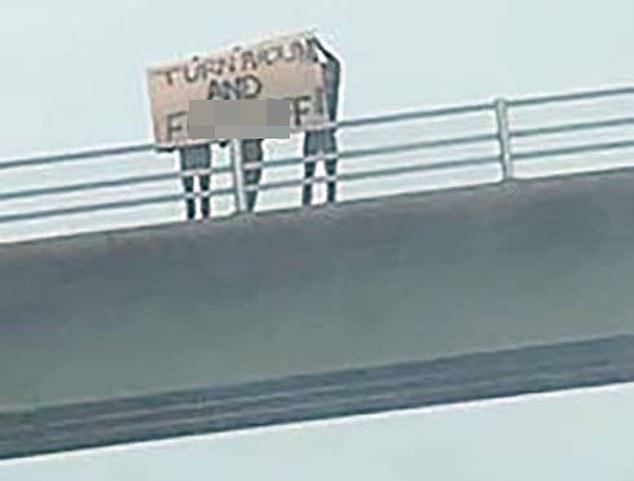 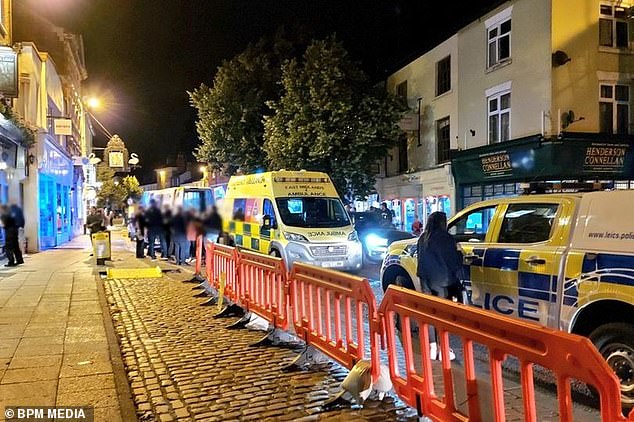 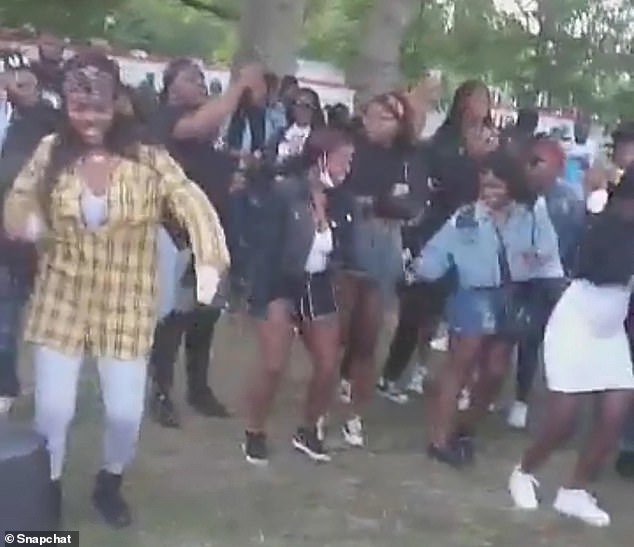 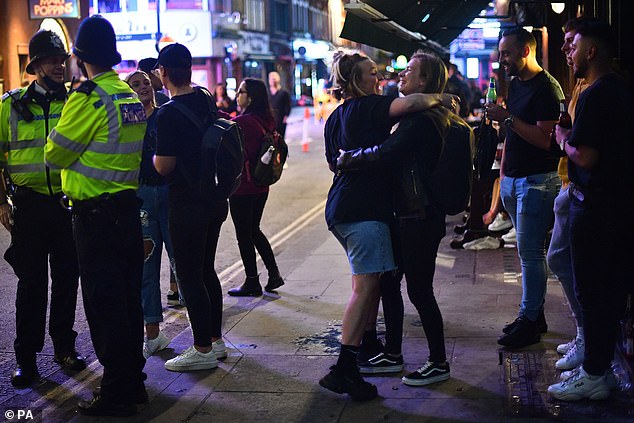 Friends embraced in the streets of Soho, London on Sunday, the second day since lockdown restrictions were eased in England

Leicester was put into a two week city-wide lockdown last week after a flood of new coronavirus cases emerged – three times higher than the next city.

In Devon and Cornwall, angry locals have lambasted tourists as hordes of caravans descended upon beauty spots at the weekend.

Holidaymakers took advantage of the eased lockdown restrictions and headed to popular destinations all over the country to try and get a break.

But locals were so enraged they have hung a sign up telling visitors to ‘f*** off.’ The crude 6ft long banner was held aloft by three people.

The three locals – whose faces were hidden –  stood on the bridge over the A30 at Bodmin, one of the main roads into Cornwall for holidaymakers.

Despite the cold reception from locals, businesses have welcomed the thousands of visitors heading back to the South West.