The UK faces tough coronavirus curbs until 2021 amid claims Boris Johnson’s personal battle with the disease has made him ‘tentative’ about lifting lockdown.

Tories have suggested the PM is ‘frightened’ of taking chances with the deadly virus after his own close call, despite fears the economic havoc might prove even more damaging to public health.

The pressure is intensifying on ministers to plot a way out of the crisis, but divisions have emerged between cautious ‘doves’ and ‘hawks’ who believe the NHS has capacity and would prefer to loosen the draconian social distancing measures earlier.

The PM has intervened from his recuperation at Chequers to snuff out speculation about an imminent easing, with Downing Street making clear his priority is avoiding a ‘second peak’ in the outbreak.

There are reports Mr Johnson’s close circle has stopped using the phrase ‘exit strategy’ and instead wants to signal a ‘next phase’ of lockdown, with varying levels of restrictions set to continue for the rest of the year until the outbreak dwindles altogether or a vaccine is found.

The ‘doves’ have been supported by grim behind-the-scenes warnings from scientists, who have advised that control of the outbreak is still so uncertain that even slight changes to the curbs on normal life could result in a disastrous flare-up.

In other developments today:

How members of the cabinet are currently split over the ending of the lockdown. Mr Johnson (top left) and Matt Hancock (bottom left) are classed as ‘doves’; Michael Gove, Liz Truss and Rishi Sunak (right, top-to-bottom) as ‘hawks’; and Foreign Secretary Dominic Raab (top centre) is among those in the middle, with Gavin Williamson (centre) and Alok Sharma (centre bottom) 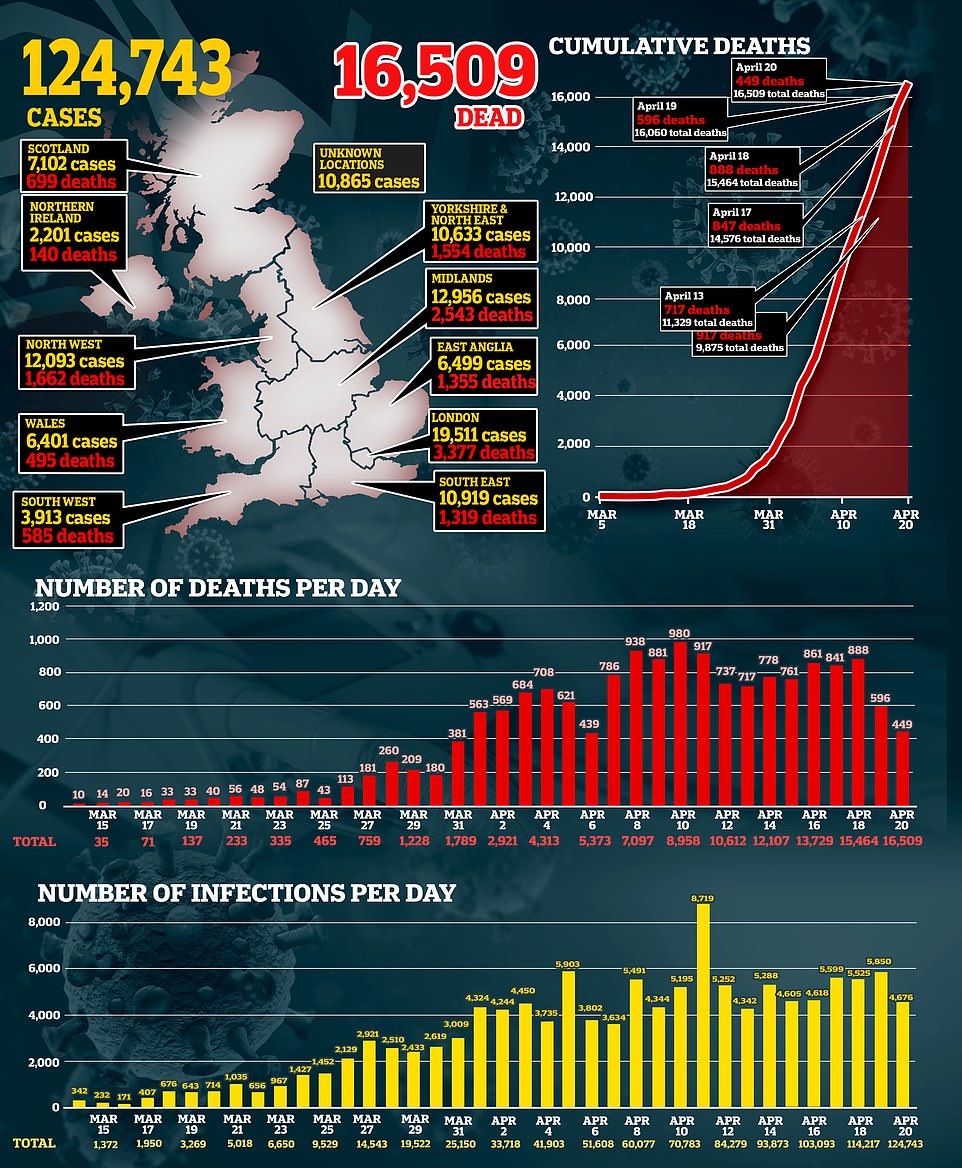 Easing coronavirus restrictions will lead to a resurgence of the illness and ‘we need to ready ourselves for a new way of living’, WHO warns

The World Health Organisation (WHO) has said rushing to ease coronavirus restrictions will likely lead to a resurgence of the illness.

The warning comes as governments across the world start rolling out plans to get their economies up and running again.

Dr Takeshi Kasai, the WHO regional director for the Western Pacific, said: ‘This is not the time to be lax. Instead, we need to ready ourselves for a new way of living for the foreseeable future.’

He said governments must remain vigilant to stop the spread of the virus and the lifting of lockdowns and other social distancing measures must be done gradually and strike the right balance between keeping people healthy and allowing economies to function.

Despite concerns from health officials, some US states have announced aggressive reopening plans, while Boeing and at least one other American heavy-equipment manufacturer resumed production.

Elsewhere around the world, step-by-step reopenings are under way in Europe, where the crisis has begun to ebb in places such as Italy, Spain and Germany.

There is no prospect of lockdown measures being eased before the current period comes to an end on May 11.

However, some senior Tories have been pushing plans for an easing soon afterwards, pointing out that the NHS is still below surge capacity and could ‘run hot’ to limit the economic meltdown.

Before his illness there were rumours Mr Johnson was alarmed about the devastation being wrought on UK plc.

However, the premier, who was released from hospital a week ago, is now seen as aligned with the Cabinet ‘doves’ cautious about shifting too early.

Health Secretary Matt Hancock, who also contracted coronavirus, is also urging a safety-first approach, regarding a second wave of the virus as more dangerous than the impact of lockdown.

Chancellor Rishi Sunak, Trade Secretary Liz Truss, and Cabinet Office minister Michael Gove are thought to be more hawkish about the need to ease restrictions sooner – although they have been toeing the line in public.

Downing Street has been furiously playing down hints that schools could partly reopen in the middle of next month, with June now looking the earliest timetable.

Government scientists have been warning that the situation is currently so finely balanced that even marginal loosenings could have disastrous effects,

One Cabinet source told the Guardian the government’s advisers on Sage had suggested any easing would push up the rate of transmission – known as R.

The source said: ‘The scientists are very clear. There’s no loosening of measures we can do that won’t bring the R back over 1.

‘There may be some small changes on their own that could do it, but the question is whether behaviours change in other ways and push the R above 1.

‘The second you have the R above one then you’re back to exponential growth.

‘We did have an R of about 3. And we’ve driven that down. But even a small increase in transmission could put you above 1.’

Amid calls from senior Tories for the government to spell out an exit strategy, one MP told The Times that fighting for his life in intensive care had changed Mr Johnson.

The MP said: ‘The Prime Minister is in a funny place, I think he’s quite frightened. His illness and the warning from the doctors has really hit him hard.

‘To find himself floored like this has really got into his head. He has become really tentative.’

There are growing signs that Mr Johnson could be back in action soon, with Downing Street confirming he is now receiving daily updates and speaking to deputy Dominic Raab by phone – although he is still not doing official work.

While there are some ministers taking stronger positions either way, the bulk of the Cabinet – including Mr Raab – are content to wait for more evidence. Scientists have been asked to present options for the lockdown by the end of the month.

The death toll for Monday was a fall on the 596 fatalities announced on Sunday, and half as many as the day before that (888). It was the lowest number for a fortnight, since April 6 when 439 victims were confirmed.

Although the statistics are known to drop after a weekend, the sharp fall adds to evidence that the peak of the UK’s epidemic has blown over.

A leading expert at the University of Oxford argued yesterday that the peak was actually about a month ago, a week before lockdown started on March 23, and that the draconian measures people are now living with were unnecessary.

Professor Carl Heneghan claims data shows infection rates halved after the Government launched a public information campaign on March 16 urging people to wash their hands and keep two metres (6’6′) away from others.

He said ministers ‘lost sight’ of the evidence and rushed into a nationwide quarantine six days later after being instructed by scientific advisers who he claims have been ‘consistently wrong’ during the crisis.

Professor Heneghan hailed Sweden – which has not enforced a lockdown despite fierce criticism – for ‘holding its nerve’ and avoiding a ‘doomsday scenario’.

The country has recorded just 392 new patients and 40 deaths today, approximately 10 per cent of the UK’s figures. Britain’s diagnoses have not been announced yet.

In separate research, the Oxford professor said he estimates that the true death rate among people who catch the virus is between 0.1 and 0.36 per cent, considerably lower than the 13 per cent currently playing out in the UK.