The Prime Minister has no known health problems and is thought to be fairly fit and well.

Will Walden, a friend of Boris Johnson and his former director of communications during his time as London mayor, said the Prime Minister is a ‘really, really strong guy’ and ‘far fitter than he looks’.

He told BBC Radio 4’s Today programme: ‘He will whip anybody’s backside on a tennis court, he runs regularly, he doesn’t smoke, he drinks moderately.’

The last time he was admitted to hospital was in August 2019 after he stepped on a broken coffee pot in his garden and got glass stuck in his foot. He said the ‘spindly little triangle’ of glass ‘hurt like h***’ for days.

In his eight-year stint as mayor of London, the 55-year-old was known for cycling to work every day and was described as the ‘most famous cyclist in Britain’.

He admitted struggling with his weight as the Foreign Secretary under Theresa May’s Government.

Mr Johnson said it was hard to stick to a healthy diet while constantly flying between countries to carry out diplomatic talks.

At his one of biggest points in December 2018, he is said to have weighed 16-and-a-half stone (231lbs) – which would have made the 5ft 9in politician obese. He blamed his size on ‘late-night binges of chorizo and cheese’.

In his column for The Telegraph at the time, he joked that his plan to get fitter was called Operation Chiselled Whippet.

He wrote: ‘Since my normal cycling speed is so slow that my wife says it is a miracle I stay upright, I have decided to get in shape.’

Mr Johnson lost 12lbs in two weeks at the end of 2018, and he claimed he was on track to dip below 15 stone (210lbs) for the first time since university.

He said he had taken to ‘guzzling water’ rather than drinking alcohol, writing in the Spectator at time time: ‘I breakfast like some Georgian hermit on porridge with a luxury sprinkling of nuts.’

People with a BMI greater than 30 are thought to be at high-risk of suffering serious complications from coronavirus because of their weakened immune systems and high blood pressure.

But Eton-educated Mr Johnson, who enjoyed rugby and cricket at school, has slimmed down since meeting his new partner and heavily-pregnant fiancee, Carrie Symonds.

Inside No10, he is said to squeeze a daily workout regime into his busy routine which includes yoga, pilates and aerobic exercises.

Mr Johnson – who first took up running in the early 2000s but reportedly gave up recently because of his knees – is an avid tennis player and regularly plays on the courts at Chequers, the PM’s country residence. 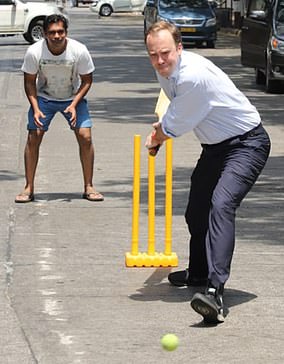 Health Secretary Matt Hancock has previously told how he keeps fit by walking up nine flights of stairs several times a day to get to his office.

Speaking last September he said he had climbed 10,000 steps in a month and felt ‘less out of breath when I get to the top’, adding that it was only a ‘simply switch’ to his daily routine.

The 41-year-old also revealed he was trying to get ‘fighting fit’ to keep up with his three young children and had also taken up the martial art of Thai boxing.

Mr Hancock is also the first MP in modern times to win a horse race, having raced to victory at the Newmarket July Course in August 2012.

The Newcastle United FC fan is also an avid cricketer and plays for the Lords and Commons Cricket team.

He also once played a cricket game on the northern tip of the Svalbard archipelago in March 2015, which was one of the most northerly matches on record.

The Gloucester-born epidemiologist, who is unmarried and has no children, is also believed to have played football while at university.

David Mabey, a diseases professor and friend of Mr Whitty, said last month how he ‘likes a game of tennis’ although the sport was not his strongest point.

Nadine Dorries was the first MP to be diagnosed with coronavirus, and suffered a ‘persistent’ cough which left her with a residual cough for six weeks after getting better as her lungs recovered.

When the politician caught coronavirus, she also unwittingly passed it onto her 84-year-old mother, whom she said had had major surgery to replace the valves in her heart damaged by childhood illness.

Her mother also has a pacemaker, suffers from breathlessness and has smoked for most of her life but only suffered mild symptoms from the virus.