Coronavirus UK: Cases are soaring in Shropshire and Swindon

Coronavirus cases are soaring in Shropshire, Swindon and North Yorkshire, according to official data used by the government to track outbreaks.

Official statistics reveal infections nearly tripled in Shropshire in the week ending July 28, rising by 280 per cent after 19 people caught the virus. Overall the Covid-19 case rate is still just 5.9 people per 100,000 population but the sharp seven-day rise will have officials keeping a close eye on the West Midlands county.

Sixty-five more people were infected over the same time period in Swindon, causing its infection rate to soar by 225 per cent in the space of a week to 29.3.  The Wiltshire town’s rate is now higher than all but three boroughs of Greater Manchester, which was last night hit by tough new restrictions to control the spread of the virus.

It comes as an official surveillance report revealed six areas of England on the government coronavirus ‘watch-list’ have yet to have any new measures imposed to tackle outbreaks.

Public Health England chiefs named 26 hotspots, including the locked-down Leicester and its surrounding Oadby and Wigston district. They also admitted they were monitoring outbreaks in Luton, which has already seen further restrictions imposed.

Salford was not named in the list but all of the other 17 boroughs affected by Matt Hancock’s last-minute decision to shut down Greater Manchester as well as parts of Lancashire and West Yorkshire were.

Six authorities on the list – Eden in Cumbria, Sandwell in the Midlands, Northampton, Peterborough, Rotherham and Wakefield – have yet to be hit by any tougher coronavirus-controlling policies.

Official statistics reveal infections nearly tripled in Shropshire in the week ending July 28, rising by 280 per cent after 19 people caught the virus. Overall the Covid-19 case rate is still just 5.9 people per 100,000 population but the sharp seven-day rise will have officials keeping a close eye on the West Midlands county

Dudley in the West Midlands and Knowsley in Merseyside rounded out the top five areas in England where Covid-19 have risen quickest in the last week.

The spike in infection rates do not necessarily mean these areas are most likely to be hit with Leicester-style local lockdowns, because officials look at overall case rates.

When England is broken down by this metric, it shows Blackburn with Darwen is still being hit hardest by the virus.

Eighty-three people per 100,000 population are being infected in the local authority, but this has fallen by nine per cent week-on-week after restrictions were toughened up again earlier this month.

10 areas where infection rates are HIGHEST per 100,000 people

10 areas where infection rates are LOWEST per 100,000 people

Only two people from the same family are allowed to visit another household indoors in the Lancashire authority and everyone must wear face masks in any enclosed public space. This differs from the national guidance, which says two households of any size can meet inside.

Meanwhile the figures show Oldham – one of the 10 areas in Greater Manchester to be slapped with more Covid-19 restrictions today – has the second-worst case rate in England.

Some 57.3 people are catching the disease a week, a rise of about 90 per cent compared to the previous seven days.

Residents in all of Greater Manchester, Blackburn with Darwen, Burnley, Hyndburn, Pendle, Rossendale, Bradford, Calderdale and Kirklees are now banned from mixing with any other households indoors or in a garden to reduce Covid-19 infections.

But people can still visit pubs, restaurants, cafes, shops and places of worship as long as it is with people they live with and they avoid interaction with others outside their bubble. The measures will be reviewed in a week’s time. 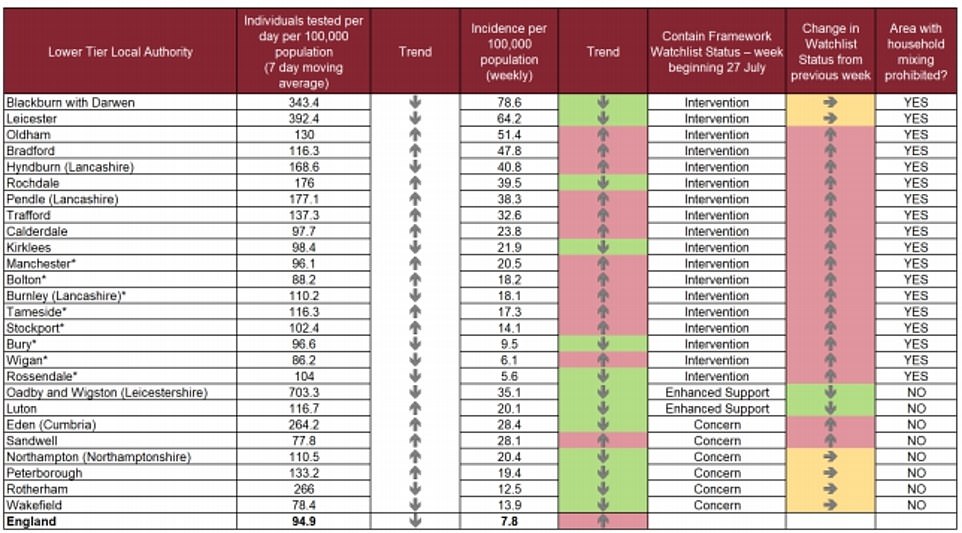 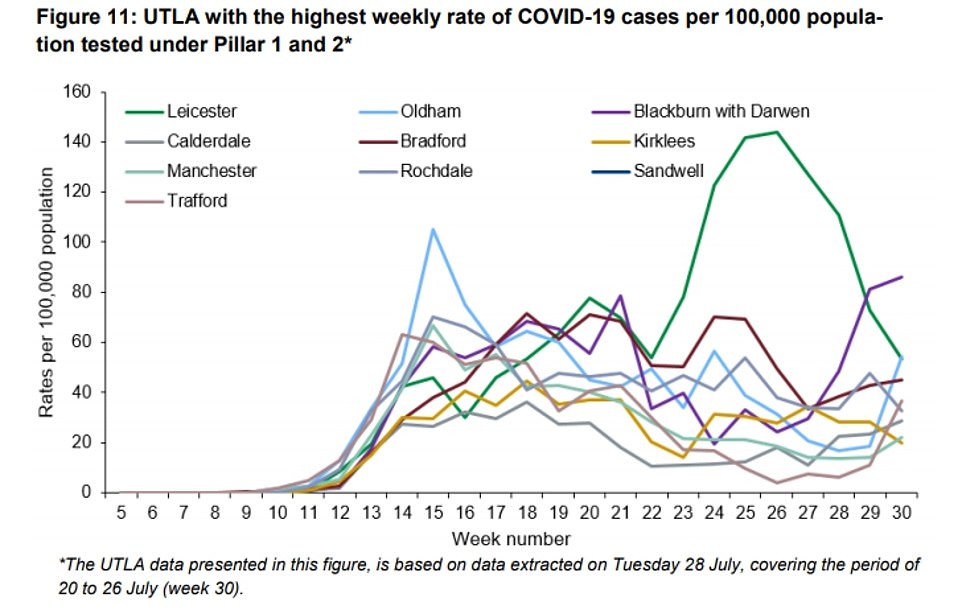 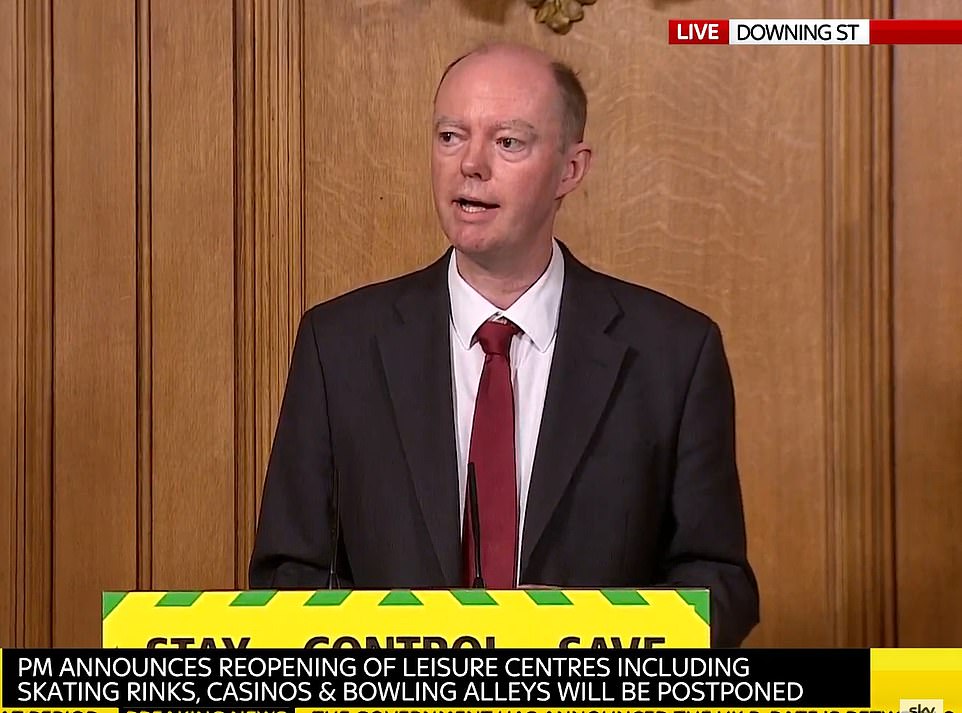 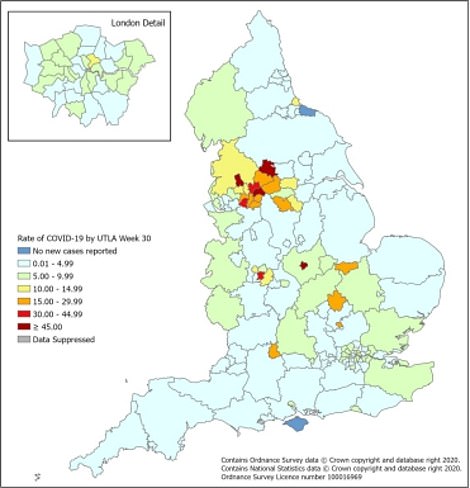 Six areas of England on the government’s coronavirus ‘watch-list’ have yet to have any tougher measures imposed to control outbreaks.

They also admitted they were monitoring outbreaks in Luton, which has already seen further restrictions imposed.

Salford was not named in the list but all of the other 17 boroughs affected by Matt Hancock’s last-minute decision to shut down Greater Manchester as well as parts of Lancashire and West Yorkshire were.

Six authorities on the list – Eden in Cumbria, Sandwell in the Midlands, Northampton, Peterborough, Rotherham and Wakefield – have yet to be hit by any tougher coronavirus-controlling policies.

Weekly Covid-19 infection rates are declining in all of those areas, according to NHS figures released today.

Northampton’s outbreak is dropping the quickest, plummeting 39 per cent in a week to 9.2 cases for every 100,000 people.

But cases aren’t falling as sharply in Wakefield, a region of Yorkshire closed to where the new lockdown measures were introduced last night, or Sandwell in the West Midlands.

Wakefield’s infection rate fell just 2 per cent to 12.8 cases for every 100,000 people in the week ending July 28, government data shows. It dropped 3 per cent to 26 in Sandwell.

Leicester still has the third highest infection rate in the country despite being forced to retreat back into lockdown in June, with 55.7 people per capita getting infected a week.

It comes as the Prime Minister today announced he was ‘squeezing the brake pedal’ on easing lockdown at a Downing Street press conference.

Mr Johnson warned that Covid-19 cases have started to ‘creep up’ and as a result the Government has no choice but to delay planned further casings.

The PM had planned to reopen casinos, bowling alleys and allow crowds at live sporting events by August 1. But that has been pushed back to August 15 ‘at the earliest’ amid an uptick in infections across the country.

Mr Johnson also revealed that the mandatory wearing of face coverings will be extended to include galleries, cinemas and places of worship.

Me Johnson said: ‘With those numbers creeping up, our assessment is that we should now squeeze that brake pedal in order to keep the virus under control.

‘On Saturday August 1 we had hoped to reopen in England a number of the higher risk settings that remained closed. Today I am afraid we are postponing those changes for at least a fortnight.

‘That means until August 15 at the earliest casinos, bowling alleys, skating rinks and the remaining close contact services must remain closed, indoor performances will not resume, pilots of larger crowds in sports venues and conference centres will not take place and wedding receptions of up to 30 people will not be permitted but ceremonies of course can continue to take place in line with Covid secure guidelines’.

He added: ‘I know that he steps we are taking will be a real blow to many people, to everyone whose wedding plans have been disrupted or cannot now celebrate Eid in the way that they would wish and I am really, really sorry about that but we simply cannot take the risk.’

Mr Johnson said the the new rules on face coverings will apply from August 8, with the police being tasked with increasing enforcement in order to ensure members of the public comply.

He said: ‘We will also extend the requirement to wear a face covering to other indoor settings where you are likely to come into contact with people you do not normally meet such as museums, galleries, cinemas and places of worship.

‘We now recommend face coverings are worn in these settings and this will become enforceable in law from August 8.’

The announcement came as it was revealed Covid-19 cases have risen to a seven-week high in England and the R rate could now be above the dreaded level of one in both the North West and South West amid growing fears of a second wave.

Government statisticians today admitted there is ‘now enough evidence’ to prove Covid-19 infections are on the up, estimating that 4,200 people are now catching the virus each day in England alone.

The Office for National Statistics (ONS), which tracks the size of the outbreak by swabbing thousands of people, said the number of new daily cases was just 1,700 a fortnight ago.

One in 1,500 people currently have the coronavirus – 0.07 per cent of the population. The figure does not include care homes and hospitals.

Boris Johnson today said they ‘can’t ignore this evidence’ as he announced he was ‘squeezing the brake pedal’ on easing the coronavirus lockdown.

Number 10’s scientific advisers today also upped the R rate in the UK, saying they now believe it stands between 0.8 and 0.9. It had been as low as 0.7 since May.

SAGE also revealed the growth rate – the average number of people each Covid-19 patient infects – may have jumped to above one in the South West, home to the stay-cation hotspots of Devon, Cornwall and Dorset.

And they said it was likely to be equally high in the North West. Matt Hancock last night announced tough new lockdown measures in Greater Manchester and parts of Lancashire and Yorkshire.