Ministers face fresh fury today as a vital shipment of coronavirus protective kit from Turkey looks set to be delayed again – with some hospitals resorting to washing medical gowns for reuse.

Downing Street has been trying to play down expectations over the arrival of 84 tonnes of life-saving supplies, which failed to turn up as promised last night.

The government says the RAF is on standby to transport the consignment but there have been ‘challenges at the Turkish end’ – without specifying exactly what they are. Three military planes are still waiting to leave RAF Brize Norton this afternoon, according to Sky News, meaning there is almost no chance of them getting there and back before tomorrow.

The PM’s spokesman said many other deliveries were being organised. ‘We are working with countries around the world and with domestic producers,’ the spokesman said.

Meanwhile, Chancellor Rishi Sunak tried to use the daily Downing Street coronavirus press conference this evening to dampen the anger of health care bosses as he insisted the government is pursuing ‘every possible option’ around the world in order to boost PPE supplies.

Mr Sunak said the UK and other countries are facing an ‘international challenge’ to source the equipment and that ministers are ‘working hard to get the PPE our frontline NHS and social care staff need’.

He said Britain is still ‘working to resolve the Turkish shipment of PPE as soon as possible’ but was unable to say when it will arrive. He did reveal a shipment of 140,000 gowns from Myanmar was unloaded in the UK today.

The hold-ups come with hospitals warning they are close to running out of some items, and medical bodies saying doctors could need to make ‘difficult decisions’ between exposing themselves to the virus or ‘letting a patient die on their watch’.

And he raised concerns that the situation was now ‘hand to mouth’ in many clinical settings.

‘There’s one trust that’s discovered that if you launder those gowns at 60 degrees, what they’ve found is that there’s probably up to three times you can do that and the gowns appear to still be capable of being fully fluid repellent,’ he told the BBC.

He accused ministers of raising the hopes of health staff saying they had ‘bitter experience’ of promised PPE either failing to arrive, or turning out to be either faulty or the wrong kit.

In another tumultuous day of coronavirus developments: 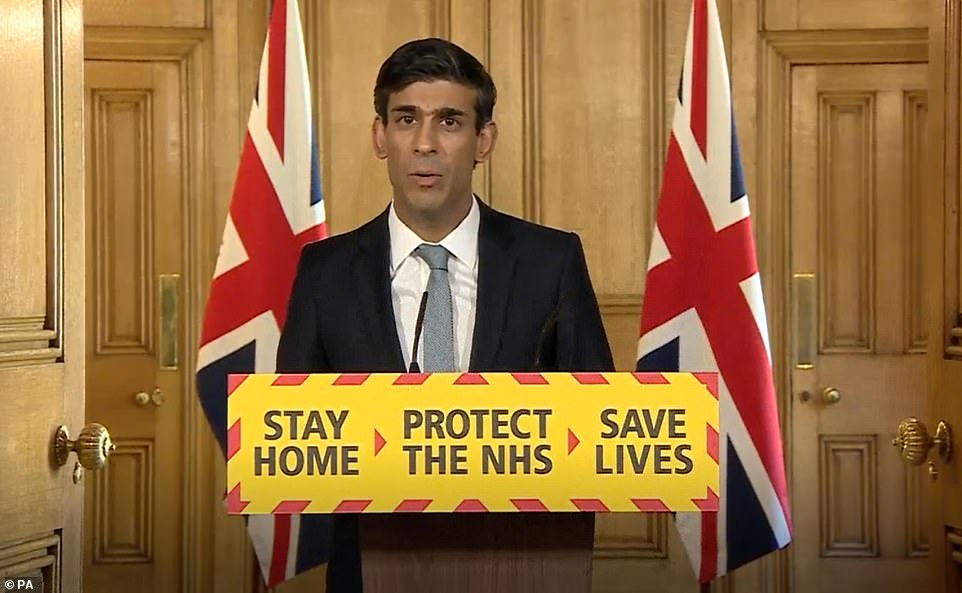 Chancellor Rishi Sunak, pictured at today’s Downing Street press conference said Britain is still ‘working to resolve the Turkish shipment of PPE as soon as possible’ but was unable to say when it will arrive 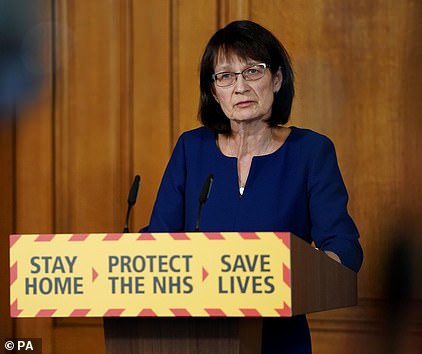 Dr Jenny Harries (pictured) said ‘we could perhaps have a more adult, and more detailed conversation about PPE supplies’ as the government comes under fire over its efforts to protect NHS staff from coronavirus

Doctors have responded with fury to the Deputy Chief Medical Officer’s claim that people are not being ‘adult’ about PPE supplies amid growing calls for a public inquiry into NHS equipment shortages.

Dr Jenny Harries slapped down critics of the government’s efforts to make sure frontline workers have access to the gowns, gloves and masks they need to protect against coronavirus.

The government is now facing increasing pressure to launch a formal probe into the supply of PPE.

The shortages have led to a chorus of criticism that those fighting in the frontline against the virus are being betrayed as the Government fails to ‘get a grip’ on the escalating crisis.

Housing Secretary Robert Jenrick announced with fanfare on Saturday that the consignment from Turkey – enough to keep the NHS supplied for several days – was coming, before Education Secretary Gavin Williams humiliatingly admitted last night that it had been postponed.

Mr Williamson said he ‘hoped’ it would be in the UK today, while Culture Secretary Oliver Dowden predicted this morning that it will leave Turkey today.

Mr Dowden told BBC One’s Breakfast show there had been ‘challenges’ in acquiring the consignment, which includes 400,000 gowns.

‘We are very hopeful that later today that flight will take off and we will get those gowns,’ the Cabinet minister said.

‘We are working very hard to resolve this, there have been challenges at the Turkish end.

‘I don’t want to start making more and more promises but I understand that that flight will take off this afternoon and they will be delivered.’

Another 25 million gowns from China had been procured and the UK would be ‘getting those shortly as well’, he confirmed.

Doctors have responded with fury after the Deputy Chief Medical Officer claimed last night that people are not being ‘adult’ about PPE supplies.

Dr Jenny Harries slapped down critics of the government’s efforts to make sure frontline workers have access to the gowns, gloves and masks they need to protect against coronavirus.

Responding to Dr Harries’ comments about PPE, Dr Rinesh Parmar of The Doctors’ Association UK told The Guardian: ‘Doctors have indeed been having both ‘adult and detailed conversations’ about the sheer lack of personal protective equipment for months, all of which have fallen on deaf ears.

‘Since late February the Doctors’ Association UK and frontline doctors have been sounding the alarm about potential shortages, which have been met with misplaced reassurances that the UK has sufficient supplies.’

Dr Parmar is now leading demands for a public inquiry, telling LBC Radio: ‘We have been collecting signatures on a petition calling for a full and frank public inquiry into what’s happening with PPE to commence after all this is over with Covid-19 and we’ve had a chance to recover.’

Dr Clarke said: ‘When we all heard those words from Jenny Harries, I know how people reacted because my phone exploded with messages from people.

Organisations representing intensive care doctors have said their members are facing ‘increasingly difficult decisions’. They pledged to support any doctors who feel they have to down their tools due to inadequate PPE.

The British Medical Association said the delay was ‘devastating’ and that shortages could force doctors to consider ‘withdrawing from the frontline’.

Chairman Dr Chaand Nagpaul said: ‘Given the Health Secretary’s warning of the possibility of full-sleeved gowns running out altogether in some hospitals this weekend, doctors were banking on the Government’s announcement of imminent extra supplies of PPE from overseas.

‘Healthcare workers desperately need proper and effective protection now – by whatever means possible. This really is a matter of life and death. Doctors and healthcare staff… are left fearful for their own health and safety – this is shameful.’

He added: ‘They are treating their own colleagues in intensive care on ventilators and tragically see some of them not survive.’

Professor Neil Mortensen, president elect of the Royal College of Surgeons, said: ‘Like all doctors, surgeons are committed to saving lives. If the gowns run out they will be left between a rock and a very hard place.

‘Do they put themselves, their colleagues and their families in the firing line, or do they take the risk of a patient dying on their watch for want of an operation?’

Mr Hopson of NHS Providers took a swipe at the government for trumpeting the delivery from Turkey before it had arrived. He told Sky News yesterday: ‘It’s been rather unhelpful to focus on a single individual consignment. We have learnt from very bitter experience over the past two to three weeks that you can’t guarantee gowns are going to arrive until they have physically arrived in the UK, the boxes have been unpacked and they have actually been tested.

‘What we have found with other consignments coming in from other countries the boxes have been mislabelled and when you’ve opened them up they have actually got masks in not gowns, we know that several consignments have actually failed safety tests.’

At least 50 NHS workers have now died after contracting coronavirus. NHS chiefs say supplies of gowns are ‘critically low’, and they need around 150,000 a day.

Previous guidance required full-length waterproof surgical gowns for high-risk procedures. Yesterday a joint statement from the Faculty of Intensive Care Medicine, Intensive Care Society, Association of Anaesthetists and Royal College of Anaesthetists said members should ‘carefully evaluate the risks’ when deciding whether or not to treat patients. 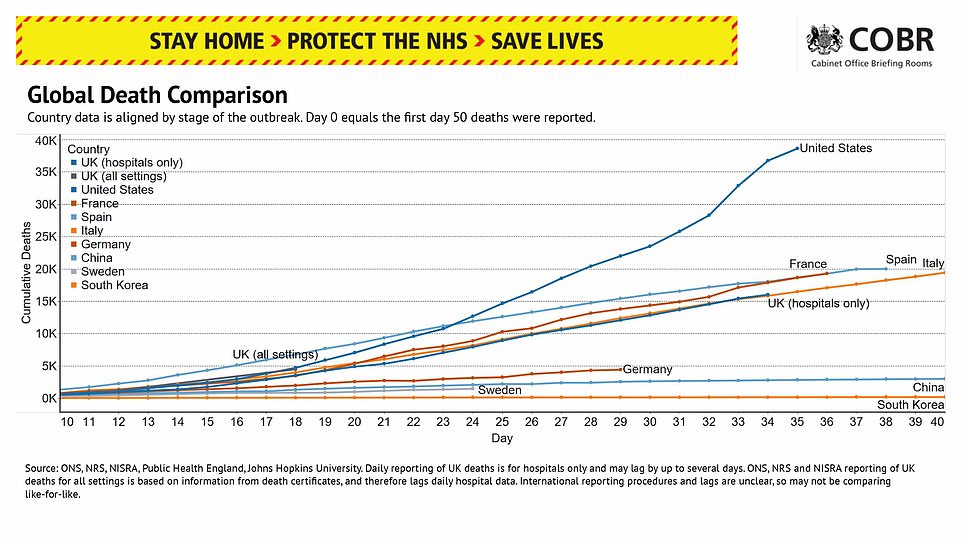 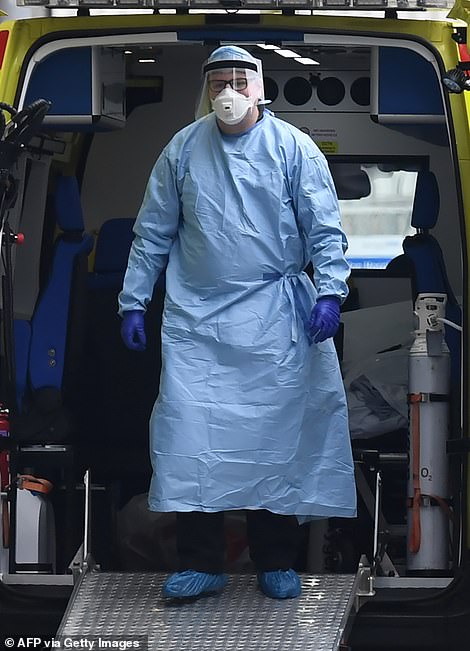 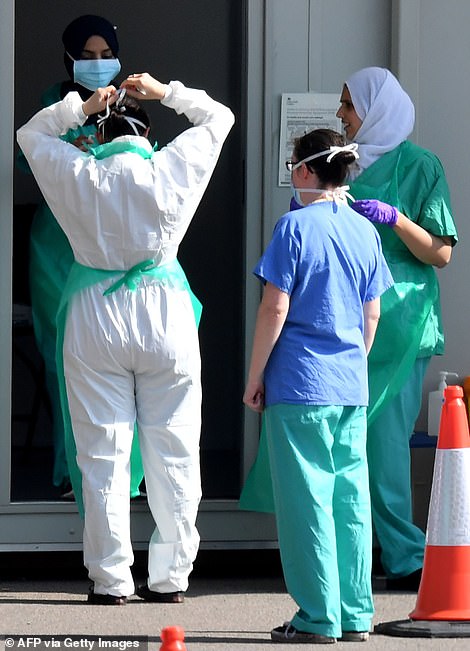 NHS chiefs say supplies of gowns are ‘critically low’, and they need around 150,000 a day. Pictured: Medical staff are seen putting on PPE at a testing centre in Rochdale, Greater Manchester

It said: ‘If shortages continue or worsen, our members will face increasingly difficult decisions. [We] will support those of their members who… decide against exposing themselves to significant risks of Covid-19 infection when PPE is clearly inadequate.’

The Government is under fire for failing to adequately stockpile PPE in January and February, as the crisis loomed. Cabinet Office minister Michael Gove was yesterday forced to defend the decision to send 273,000 items to China in February.

He said: ‘We did sent protective equipment to China but we’ve received far more from China … than we’ve given.’

Lord Deighton, who led planning for the 2012 London Olympics, has been appointed to co-ordinate a ‘national effort’ to make life-saving gowns, gloves and masks.

The Government has issued a ‘call to arms’ for British industry to make essential PPE items, with Burberry, Rolls-Royce and McLaren already producing equipment. 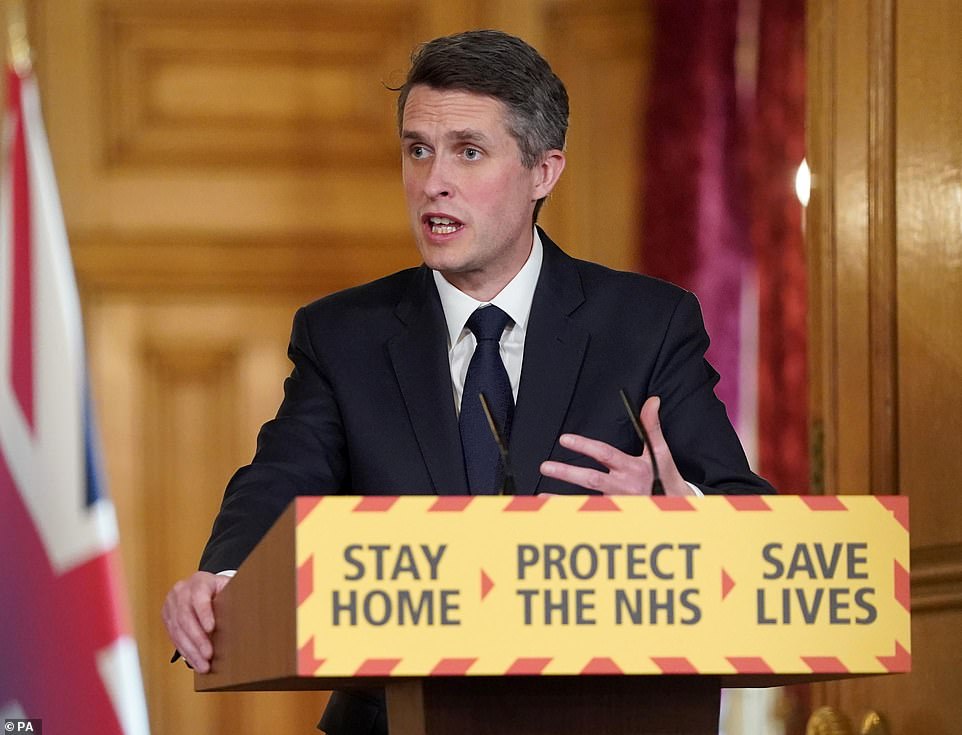