Britain has announced another 616 coronavirus victims today, taking the total number of fatalities in the UK to 18,783.

NHS England confirmed a further 514 people have died with COVID-19 and another 102 deaths were announced across Scotland, Wales and Northern Ireland.

The Government had hoped to keep the number of victims to 20,000 or lower but recent trends suggest the UK will hit that by Sunday counting hospital deaths alone.

The update comes as rifts are emerging in Government over when the UK will start to move out of its current lockdown state when the coronavirus infection rate falls.

Conservative MPs have warned the Government it must put its faith in the public to be responsible and spell out how and when the nationwide shutdown will start to ease off.

Scottish First Minister Nicola Sturgeon, who gives her daily briefings hours before Downing Street, today said she does not expect Scotland to return to normal this year.

She indicated she was willing to ease restrictions without Whitehall’s approval but said vulnerable people would have to continue to be shielded and large gatherings of people would not be allowed ‘for some months to come’. 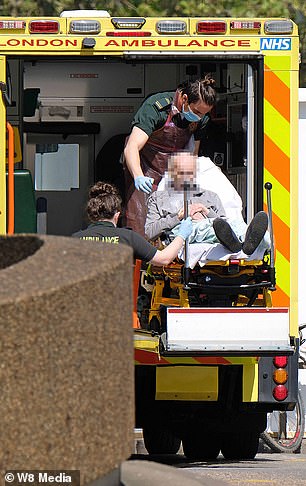 NHS England today announced that the 514 patients who had died in its hospitals were aged between 31 and 100 years old.

Sixteen of them, the youngest of whom was 37, had no other health problems before they caught the coronavirus.

The biggest proportion of the deaths announced today – 216 of them – happened on Tuesday, April 21, while 111 happened yesterday and 75 on Monday.

April 8 remains the deadliest day of the outbreak so far and is believed to have been the peak. NHS England now says 831 people died in its hospitals on that date.

The Government last week said the current lockdown, in which people are not allowed to leave except for shopping, exercise and medical appointments, will continue at least into early May.

But some ministers are becoming impatient and urging Whitehall to give reassurances about when the public might be able to return to work.

They said it is ‘silly’ for the Government not to be totally frank with the public given how well most of the population has stuck to social distancing measures.

They stressed ‘there has got to be an economy to go back to’ as they sounded a warning which will be heard loud and clear in Downing Street.

The committee’s treasurer, Geoffrey Clifton-Brown, then broke cover today as he suggested a comprehensive plan must be set out within the next month or many businesses ‘are actually likely to cease trading’.

However, in a sign tensions are likely to rise, Dominic Raab said last night it will be weeks before ministers even ‘think about’ putting forward an exit strategy while Chief Medical Officer Professor Chris Whitty said some restrictions are likely to be in place for the ‘next calendar year’.

The UKHospitality industry body has warned pubs and restaurants face a ‘bloodbath’ if lockdown extends long into the future amid calls for firms to be given a reprieve in the form of delayed rent payments. Failure to take such action could see one third of the sector go bust.

There have been signs in recent days that some people are beginning to tire of the curbs on daily life with photographs showing more people on the UK’s roads and in the nation’s parks.

Pressure is only likely to grow on the government to provide more details of its plans with Nicola Sturgeon today due to set out her own strategy for easing restrictions.

The Scottish government will publish a new paper containing guidelines designed to chart a way forward when lockdown is eased. It will say that people will need to adapt to a ‘new normal’.

It came as it emerged the government is pressing ahead with plans to set up a 15,000 strong contact tracing army which will play a key role in stopping future outbreaks of the killer bug in Britain.

It will be based on the system used in South Korea which has successfully managed to minimise its own outbreak through the use of extensive contact tracing of people who have become infected.