The UK has announced 936 more deaths from the coronavirus today, taking the total number of fatalities to 7,095 and marking another record one-day high in the nation’s deepening crisis.

NHS England confirmed 828 more people have died in its hospitals, aged between 22 and 103 years old, in recent days.

Scotland, where 77 more deaths have been confirmed, also diagnosed a further 336 infections in the past 24 hours, Public Health Wales announced 284 more positive tests and 33 deaths, while five more fatalities were recorded in Northern Ireland.

The total number of people who have tested positive for the virus across the UK currently adds up to more than 55,000, but the true scale of the outbreak is unknown because only hospital patients and NHS staff get tested.

As the NHS and Government battle to maintain their grip on the outbreak, stricken Prime Minister Boris Johnson remains on an intensive care unit in a central London hospital, where his spokesman says he is in a stable condition and ‘responding to treatment’. The PM was admitted on Monday night after suffering a fever for 10 days.

Attention has now turned to Mr Johnson’s vow to evaluate the progress of the UK’s lockdown next week, which it looks like he will be unable to do. Downing Street says it will delay the evaluation, and there are no signs the stay-at-home measures will be lifted soon. London Mayor Sadiq Khan says the UK is ‘nowhere near’ the end.

This sentiment was echoed by the World Health Organization’s director for Europe, Dr Hans Kluge, who said it would be ‘dangerous’ to try and ease the rules too soon. Wuhan, the Chinese city where the pandemic started, has only today started to let its citizens travel again, 73 days after its prescient lockdown was enforced in January.

In another day of developments in the Britain’s coronavirus crisis: 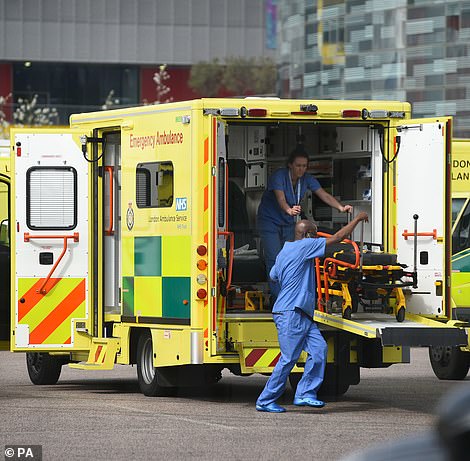 When the death tolls of all four UK countries are combined the total number of fatalities is 7,172.

But because the statistics are recorded differently in each nation, numbers announced by the Department of Health each day are lower.

The Department’s all-UK roundup statistics are expected later this afternoon.

Experts warn that people should take the daily death tolls announced by governments as a guide rather than a concrete number for each day.

Many of the fatalities announced each afternoon happened days or weeks ago, and many of the people who have actually died in the past 24 hours will not be counted in the numbers for days or weeks to come.

University of Oxford’s Professor Jim Naismith said yesterday: ‘The current methods of reporting… has become unhelpful and distracting in evaluating the progress of the pandemic.

‘The swings in numbers that we are seeing are emotionally draining; hope one day and despair the next.’

He said the numbers of new positive tests and hospitalisations were a more accurate picture of the day-by-day situation, because there is no time delay on those.

A total 704 new cases were diagnosed in Scotland, Wales and Northern Ireland in the past 24 hours. England’s statistics, which account for the bulk of the numbers for Britain, will be published later this afternoon.

In recent days they have been reasons to be cheerful, with the 3,634 cases diagnosed yesterday the lowest for a week. For the past seven days the number has remained relatively stable at around 4,000 per day.

Today’s statistics come as Downing Street confirmed that the Government will not consider bringing an end to the UK’s lockdown next week.

Next Monday will mark three weeks since Prime Minister Boris Johnson urged the entire country to stay at home. 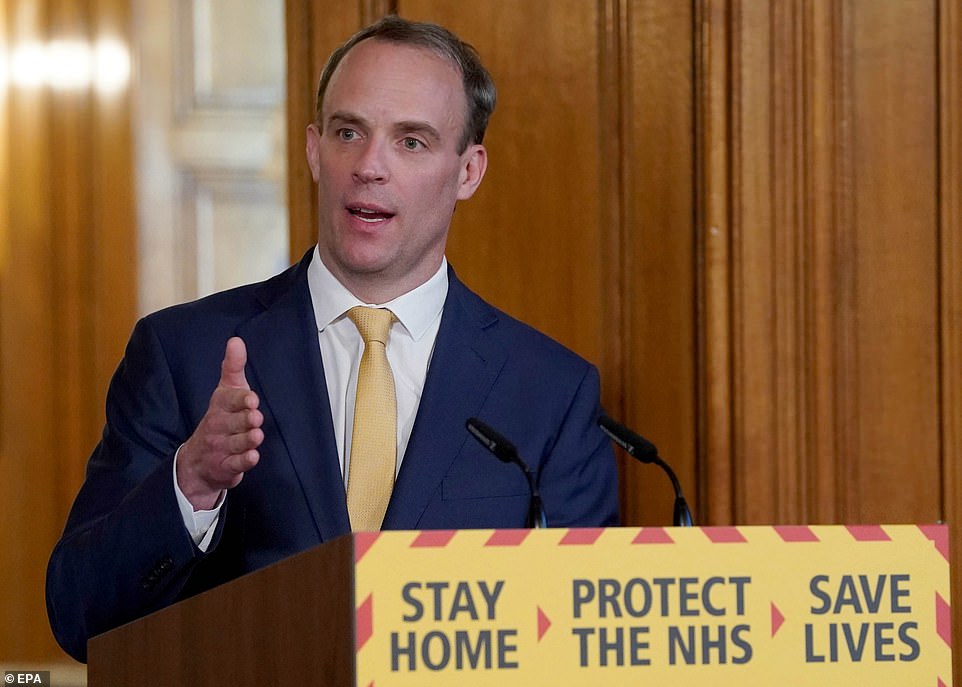 Foreign Secretary, Dominic Raab, is standing in for Boris Johnson and said it is too soon to consider ending the UK’s lockdown and that the country must keep its foot on the pedal

Chief scientific adviser to the Government, Sir Patrick Vallance, said last night that official statistics were starting to show ‘the beginning of change’ for Britain but it would still be at least a week until a clear picture of the epidemic emerged.

Mr Raab stressed at the daily Downing Street briefing last night that authorities could not consider easing the lockdown restrictions until it was clear the peak of the epidemic had passed and it could be ‘responsibly done’.

Boris Johnson is ‘stable and responding to treatment’ after his second night in intensive care, it was revealed today.

Mr Johnson’s official spokesman said he continues to receive ‘standard oxygen treatment’ and is ‘breathing without any other assistance’ – making clear he is not on a ventilator.

‘The Prime Minister remains clinically stable and is responding to treatment,’ the spokesman said.

‘He continues to be cared for in the intensive care unit at St Thomas’s Hospital. He’s in good spirits.

No10 confirmed that the PM has not been doing any work, although they said he has been in contact with aides.

Downing Street confirmed the review would take place later than the three-week mark originally committed to by Mr Johnson on March 23 – which meant by Easter Monday.

WHO regional director for Europe, Dr Hans Kluge, said in an update that relaxing lockdown too early would be ‘dangerous’.

There was cautious optimism from chief scientific adviser Sir Patrick Vallance last night that the fight against COVID-19 ‘could be moving in the right direction’.

Sir Patrick said there were signs that the rates of new infections and new hospital admissions for COVID-19 were ‘flattening off’.