Coronavirus UK: FTSE 100 falls on opening after downbeat assessment from US Fed

London stock markets plunged today as hopes faded for a quick economic rebound after the coronavirus pandemic amid news of more heavy US job losses.

Traders reacted this afternoon to unemployment continuing to rise in the US, with more than 36million Americans having now filed jobless claims in the eight weeks since the crisis began.

Fears are also growing about a second wave of infections, while the US Federal Reserve chief warned of a recession worse than any since the Second World War.

That comes after UK officials suggested Britain is entering a ‘mega recession’, with tax rises and curbs to state pensions possible to help fix a £300billion black hole.

THIS WEEK: The FTSE 100 index of Britain’s biggest companies fell to 5,742 in London today

Meanwhile Lloyd’s of London insurance market said it will pay out up to £3.5billion over virus claims, placing it on a par with the terror attacks on September 11, 2001.

It warned today that losses ‘could rise further if the current lockdown continues’ and told of the ‘far-reaching impacts’ of the virus.

But Hargreaves Lansdown jumped 6.9 per cent to the top of the FTSE 100 this morning after the financial services company said it saw higher trading demand from its retail clients and an increase in net new business.

Downing Street said the crisis had created ‘unprecedented economic uncertainty’ after the economy shrank by 2 per cent in the first three months of this year.

This was the sharpest contraction since the financial crisis of 2008. In March, as the lockdown began, GDP fell by 5.8 per cent, the biggest monthly contraction ever.

2020 SO FAR: The FTSE 100 plunged in March this year before regaining some ground in April

Chancellor Rishi Sunak said it was ‘very likely the UK economy will face a significant recession this year and we are in the middle of that as we speak’.

Meanwhile in the US, Federal Reserve chairman Jerome Powell said in a speech: ‘The path ahead is both highly uncertain and subject to significant downside risks.’

He warned of a recession worse than any since the Second World War, and called for additional fiscal spending to stem the fallout from the pandemic.

New outbreaks in South Korea and China were cause for concern, even as more countries begin to re-open their economies after lengthy lockdowns. 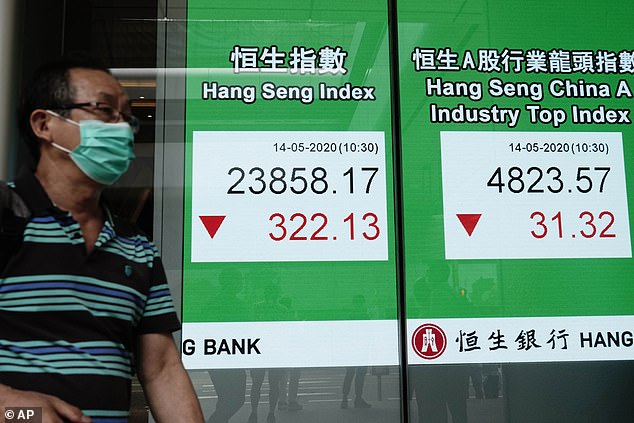 ‘But it’s probably seen its best also, so I’m expecting a correction. The issue is whether we get a second wave (of infections) … that would be my greatest fear.’

Asian markets all fell overnight. China has re-imposed movement restrictions near its borders with North Korea and Russia after a new outbreak was detected there.

Meanwhile South Korea is working to contain an outbreak centred around bars and nightclubs in Seoul. 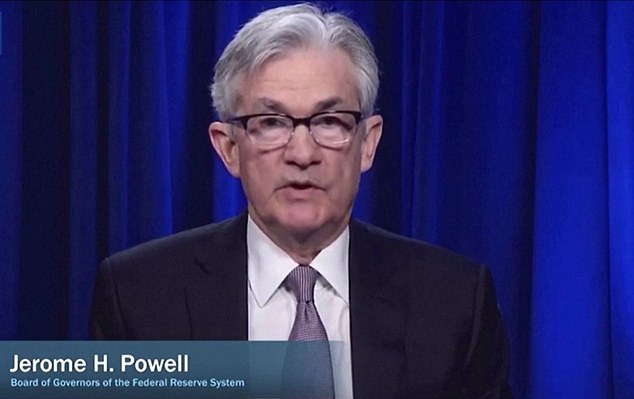 And World Health Organisation emergencies expert Mike Ryan told an online briefing yesterday: ‘It is important to put this on the table: this virus may become just another endemic virus in our communities, and this virus may never go away.’

In the US, the Donald Trump administration is pressing on with re-opening plans despite urgings of caution from medical experts.

‘We’re going to slowly open the economy,’ US Treasury Secretary Steven Mnuchin told Fox News yesterday. ‘But there is also a risk that we wait too long, there is a risk of destroying the U.S. economy and the health impact that that creates.’

Meanwhile public health leaders in Britain said a new test to determine whether people have ever been infected with coronavirus is 100 per cent accurate. 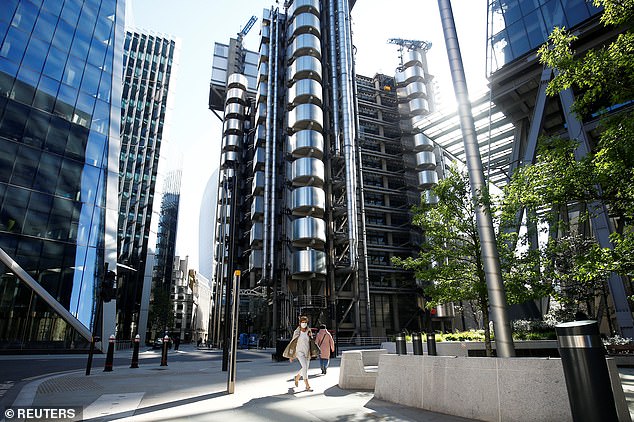 Lloyd’s of London insurance market (file picture) said it will pay out up to £3.5billion over virus claims, placing it on a par with the terror attacks on September 11, 2001

Prime Minister Boris Johnson has previously called antibody testing a ‘game-changer’ as it may reveal how many people have had Covid-19 and may now have a degree of immunity.

Public Health England said last week scientific experts at its Porton Down facility had carried out an independent evaluation of a new antibody blood test developed by a Swiss pharmaceutical company.

The examination found Roche’s serology test was ‘highly specific’ and had an accuracy of 100 per cent in detecting people who had ever had Covid-19.

Professor John Newton, national coordinator of the UK Coronavirus Testing Programme, said although it was still unclear to what extent the presence of antibodies indicated immunity to Covid-19, it was a ‘very positive development’.