Coronavirus: UK has one of the lowest testing rates in the world

The UK has one of the lowest coronavirus testing rates in the world, data has revealed.

In a comparison of 17 countries with the largest coronavirus outbreaks, Britain ranks 15th above only Peru and India.

Testing just 5.54 people per every thousand in its population, the UK sits miles below similar nations including Italy, Germany and Spain which are all testing more than 20 people per thousand, according to statistics compiled by Oxford-led researchers.

Iceland, included in the comparison because of it’s world-beating testing capacity, is testing 124.47 people per thousand – one in every eight people in the country.

Testing people for COVID-19, and isolating them and others they have been in contact with, is seen by the World Health Organization as absolutely crucial to bringing the pandemic under control.

The British Government, currently only testing medical workers and people in hospitals, has set a target of carrying out 100,000 tests per day by May 1.

The UK is currently only testing hospital patients and health workers and their families – not the general public. Its scheme is gradually expanding to other key workers in the coming days and weeks (Pictured: A health worker prepares to swab someone at a drive-in testing centre in Wolverhampton)

But the scale-up, inspired by Germany’s massive testing capacity and now due in 10 days’ time, looks like a tall order at the UK’s current pace – just 19,316 were done yesterday, an increase of only 9,000 in almost three weeks from 10,215 on April 2.

Statistics from the Our World in Data project, which is run by experts at the University of Oxford, shows testing data for countries around the world.

Figures for 17 of the 20 countries with the worst COVID-19 outbreaks in the world –  no data was available for Brazil, Iran or China – shows that the UK ranks poorly alongside similar nations. 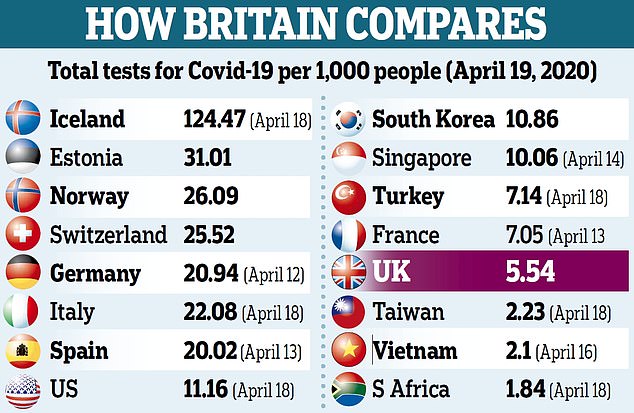 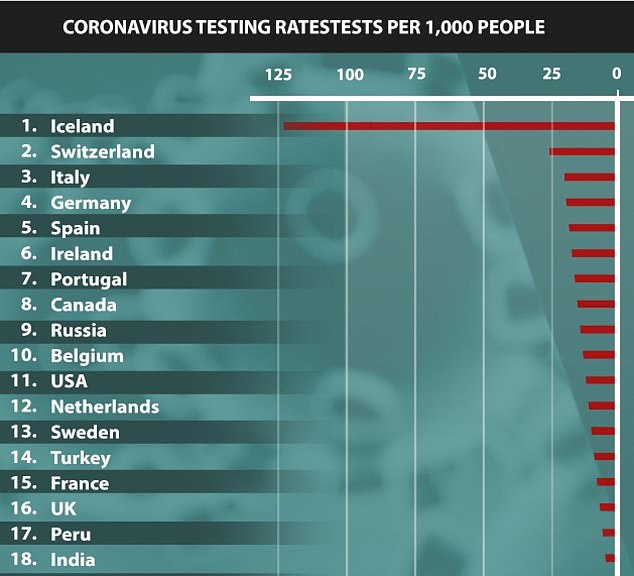 Scientists have created a portable machine that can analyse coronavirus swabs and give results in as a little as 20 minutes.

The kit, developed by experts at the University of South Wales, costs less than £100 to manufacture and is currently being evaluated.

It works by analysing a nasal swab for traces of the virus’ DNA, known as a PCR test. It is able to detect people who are currently infected with the illness.

The kit would cut the need to send samples to one of the centralised laboratories run by Public Health England or ones set-up in 40 NHS hospitals, which can take several days for results to be processed.

The test and device are being evaluated by Cwm Taf Morgannwg University Health Board and could be in use at its care homes within weeks.

The test is said to use different chemicals to the current accredited test, allowing the university to avoid bottlenecks in the global supply chain.

Shortages of trained staff, swabs and chemicals are thought to be to blame for the UK’s meagre testing programme – as well as the Government’s slow response to the crisis.

However, it is not yet clear which chemicals the machine relies on to analyse swabs. The machine is based on work previously developed for the diagnosis of urinary tract infections four years ago.

Dr Jeroen Nieuwland, who helped create the kit, said: ‘We have been developing our diagnostic testing platform for the last few years.

‘So we know it works well for other infections. So our work has enabled us to quickly switch it to detect the underlying virus for COVID-19.

‘It is really pleasing to be able to support our frontline health workers, to help detect if they have the virus.’

Iceland was included in the comparison not because of the size of its outbreak (1,771 patients) but because of its high testing rate – 124.47 people per thousand.

Above those came the UK and then France, with the slightly higher 7.05 tests per thousand.

Testing does not appear directly linked to death rate, however.

Italy, which has a death rate of 13.3 per cent, has a higher testing rate than Germany, where only 3.2 per cent of patients have died.

France, meanwhile has a similar testing rate to Turkey – around seven per cent – but its death rate is 17.8 per cent compared to Turkey’s 2.3 per cent.

Britain’s poor performance in comparison to other countries does not do much for the Government’s hopes of hitting its 100,000-tests-per-day plan in the next 10 days.

So far, Public Health England has maxed out at around 22,000 tests in a single day.

There is lab space to conduct 38,000 tests a day – but barely half of those are being carried out.

This is partly because, having created capacity to test patients and NHS staff, ministers were too slow to expand the scope of programme to other vulnerable patients or front line workers.

Scientists also say there is a shortage of key chemicals and swabs which are vital to carrying out the tests.

Cabinet minister Michael Gove at the weekend insisted the Government remained ‘on course’ to hit the target set by Health Secretary Matt Hancock.

Sir Jeremy Farrar, director of the Wellcome Trust scientific research institute in London, said the Government had been too slow to increase testing.

He said: ‘If you look at what has happened in Korea and Singapore and indeed in Germany, there was a much quicker ramping up of testing.

‘Testing will be critical as we come out of this epidemic.’