Property prices are forecast to fall 7 per cent this year as a direct result of the coronavirus lockdown with much of the decline already taking place, a leading estate agent claims

Values are likely to have already fallen by 5 per cent since the beginning of the coronavirus crisis as the market ground to a halt, according to revised forecasts from estate agent Knight Frank.

Its forecast came as the Government revealed tonight that the property market can reopen from tomorrow, with people able to move home and estate agents allowed to do valuations and show prospective buyers round homes.

But Knight Frank’s predicted drop is considerably less than the Bank of England’s forecast last week that house prices in Britain would fall 16 per cent due to the coronavirus crisis.

Slump: Prices are likely to have already fallen 5% since the beginning of the crisis, Knight Frank said

Housing Secretary Robert Jenrick told estate agents tonight that they can reopen immediately, but valuations and viewings must be done with strict social distancing in place.

The Government advised agents to do online viewings where possible, but surveyors will be permitted to go to properties to do mortgage valuations and building surveys for prospective buyers.

Buyers were told not to move home unless it was absolutely necessary when lockdown was introduced – and only into empty properties.

This has now changed and an estimated 450,000 buyers and sellers stuck in property limbo will be able to exchange contracts and complete on purchases.

However, some property experts forecast a wave of lower offers on homes. Jonathan Hopper, of Garrington Property Finders, said in some locations ‘the price correction could be brutal’.

He said: ‘Strategic buyers sense that the Covid shock could trigger big price reductions, and that the post-lockdown market will be a buyers’ one’.

Since the Government announcement that Britain will fully exit lockdown only by the end of July at the earliest, Knight Frank now predicts a bigger slump than it thought at the beginning of April, when it assumed restrictions would be lifted at the end of May.

It has now penciled in a 7 per cent fall across the country, compared to a previous 3 per cent decline, and a 5 per cent fall in prime London locations, where it initially had forecast no change since they are already 20 per cent lower than in 2014.

‘Since Sunday night it’s become clearer that some lockdown measures will remain in place into July and that social distancing rules governing day-to-day life, including property transactions, may remain in place beyond that,’ Knight Frank said.

Five per cent seems like a reasonable starting point

The estate agent added: ‘If we allow for the fact that some asking prices have come down since March, then we might conclude that prices are off by 5 per cent already since the beginning of the crisis.

‘Five per cent seems like a reasonable starting point, and it is increasingly clear that prime London’s five-year decline doesn’t means it is immune from price falls.’

However, it does not expect prices to keep falling at the same speed as they have in the past couple of months, citing growing evidence that sellers were not accepting lower offers so often. 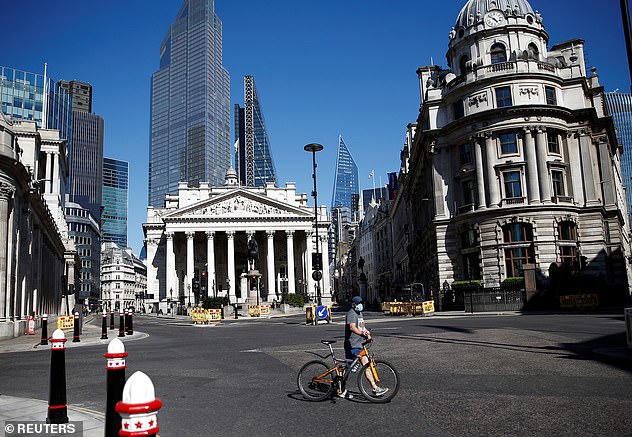 House prices in prime London locations could pick up again in the second half of the year, according to Knight Frank

‘I think it would be wrong to assume a continuation of the decline we have seen over recent weeks,’ Knight Frank said.

‘The key question is will vendors accept discounts of more than 5 per cent? Some will, but there is growing evidence from the widening spread between average offers and the offers that are being accepted that many simply won’t.’

If the lockdown is indeed lifted in July and the housing market can begin to function again, with people being allowed to view properties, then downward pressure on prices ‘should be limited’.

And in prime London locations, it’s possible to see prices pick up again in the second half of the year, according to Knight Frank.

House prices in April were still higher by 2.7% when compared to the same time last year

Its forecasts are more or less in line with those by another estate agent, Savills, which predicts falls between 5 per cent to 10 per cent this year amid thin sales.

Similarly, Lloyds revealed in its quarterly results that has a base case scenario prediction that house prices will fall 5 per cent this year.

The Bank of England, however, has forecast a bigger slump, as it said it expects house prices to fall 16 per cent due to the coronavirus crisis and lockdown, before gradually recovering as economic activity picks up.

The forecast came in the Bank of England’s Financial Stability Report last week, alongside its Monetary Policy Report and interest rates decision.

The BoE said prices would be pushed lower by rising unemployment, but propped up in part by ‘persistently’ low mortgage rates.

The latest monthly data by Halifax for April shows house prices were still 2.7 per cent higher compared to the same time last year despite the coronavirus outbreak.

However, property values were down by 0.6 per cent in April compared to in March, the biggest monthly fall in two years, according to the lending giant.