Princess Beatrice has officially cancelled her wedding to Edoardo Mapelli Mozzi, due to the coronavirus pandemic.

The Queen’s granddaughter, 31, was set to wed the millionaire property tycoon, 37,  at St James Palace on May 29, but the wedding has been put on hold as the lockdown continues, a spokesperson told People magazine.

‘There are no plans to switch venues or hold a bigger wedding. They aren’t even thinking about their wedding at this time. There will come a time to rearrange, but that’s not yet,’ a spokesperson said.

Buckingham Palace had previously confirmed the reception set to take place in their gardens was cancelled.

Princess Beatrice, 31, has officially cancelled her wedding to Edoardo Mapelli Mozzi, due to the coronavirus pandemic. Pictured, the couple’s official engagement picture 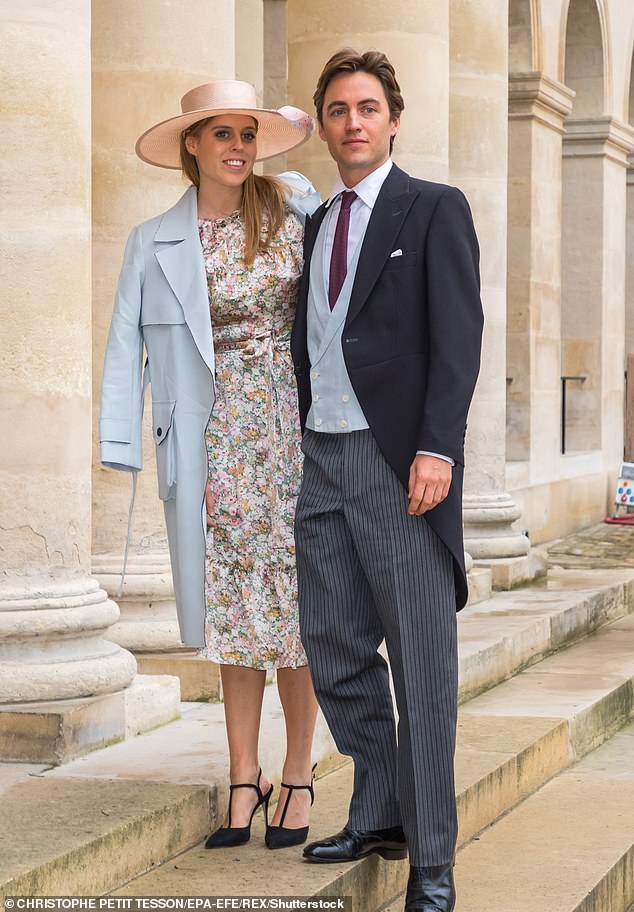 The royal was set to wed the financier, 37, at St James Palace on May 29, but the big day has been put on hold as the lockdown continues. Pictured, at the wedding ceremony of the Prince Napoleon Countess Arco-Zunneberg at the Saint-Louis-des-Invalides cathedral at the Invalides National Hotel in Paris in October

Invitations were never sent out, due to complications with the virus, a source added to People.

Earlier today, Dominic Raab declared that coronavirus lockdown will stay for at least another three weeks, taking the date to May 7.

The Foreign Secretary, who is deputising for the Prime Minster, confirmed the public’s ‘efforts are starting to pay off’ but draconian curbs cannot yet be lifted after he chaired a meeting of the Cobra emergency committee.

The Church of England has said the number of people attending church weddings during the outbreak should be limited to the legal minimum of five – the priest, the bride and groom and two witnesses. 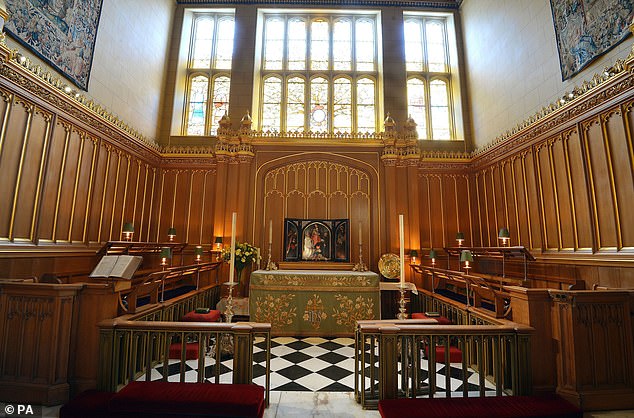 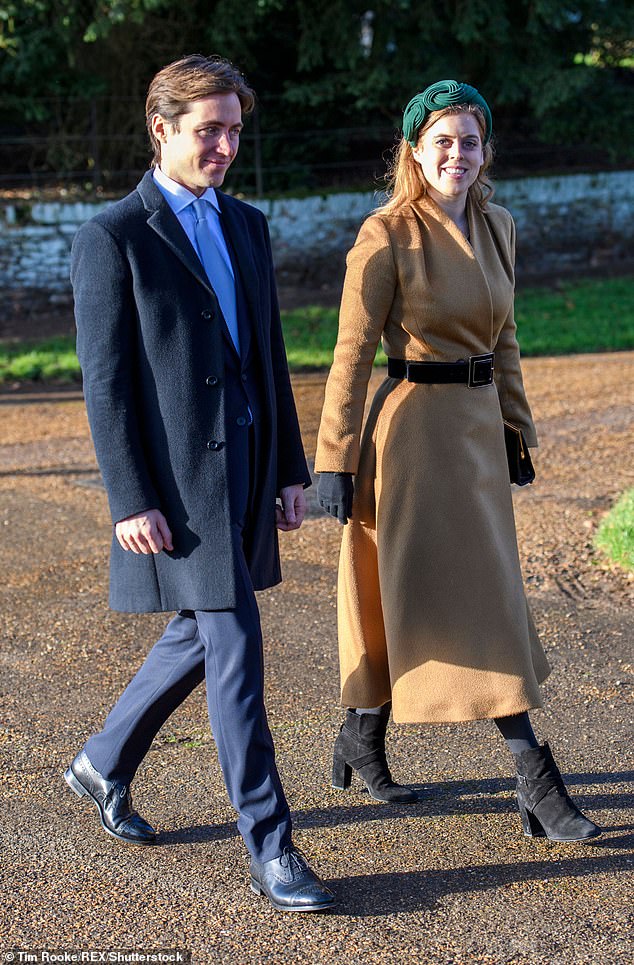 This means if the couple’s wedding went ahead while the pandemic is ongoing, they would be limited to just two guests.

Beatrice, daughter of the Duke of York and Sarah, Duchess of York, was set to walk down the aisle in the Chapel Royal of St James’s Palace in London.

The princess was overjoyed after becoming engaged on a weekend trip to Italy last September, and the couple said they could not wait to be married.

Her forthcoming nuptials have already been overshadowed by the scandal that has engulfed her father Andrew, with the date already being changed twice to accommodate the Queen’s second son. 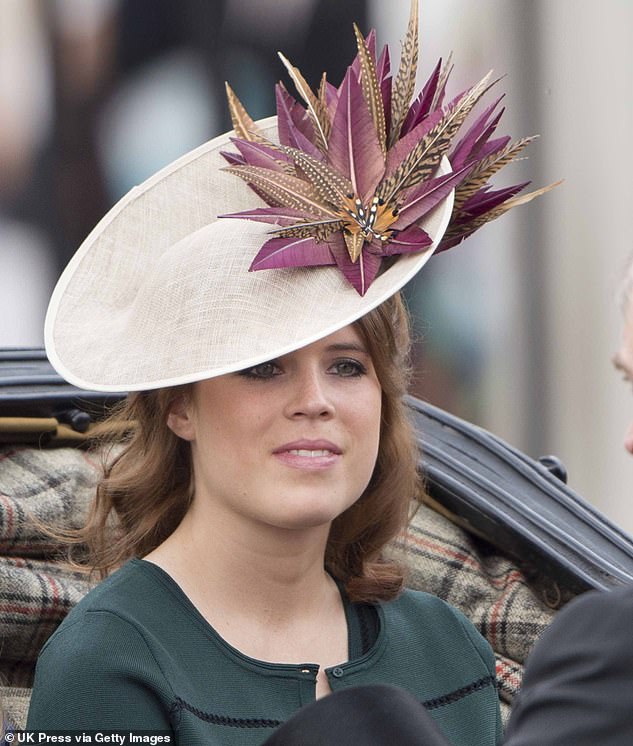 New Church of England rules means Princess Beatrice and Edoardo will only be able have two family members or friends if the pandemic continues, meaning Beatrice could have her parents but not her sister Princess Eugenie. Pictured, Princess Eugenie during the Trooping the Colour, this year marking the Queen’s 90th birthday at The Mall on June 11, 2016 in London

The duke retired from public royal duties in November after his disastrous Newsnight interview about his friendship with convicted sex offender Jeffrey Epstein.

Andrew has strenuously denied claims from Virginia Giuffre that he slept with her when she was 17 after she was trafficked by Epstein.

The duke is facing calls to talk to the FBI and US prosecutors, but has previously been accused of having ‘completely shut the door’ on any co-operation.

As the granddaughter of a monarch, Beatrice would have been expected to wed in front of 800 guests in St George’s Chapel, Windsor Castle, just like her sister Princess Eugenie, whose ceremony was televised and was followed by a carriage ride through the town.

But, amid the controversy over her father, the princess opted for the more intimate, low-key option of the Chapel Royal and was due to invite 150 guests. 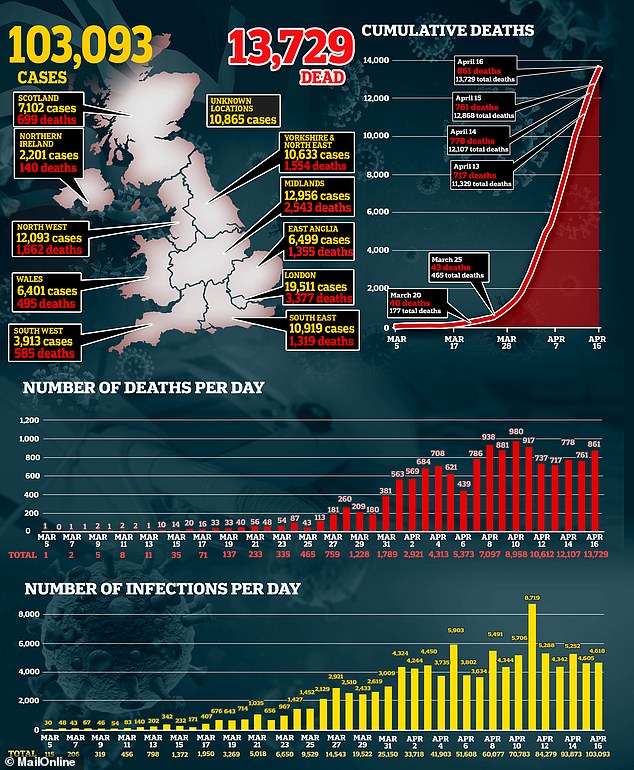 Edo’s son, Wolfie, from his relationship with architect Dara Huang, was set to be in the wedding party, alongside Eugenie as chief Bridesmaid.

The Queen was to host the private reception in the grounds of her London residence.

But the Government has called on all people in the UK, particularly the over-70s, to avoid all non-essential contact and travel as part of unprecedented peacetime measures aimed at controlling the spread of Covid-19.

The Queen, 93, and the 98-year-old Duke of Edinburgh are at Windsor Castle, where they are socially distancing themselves.

Speaking at a press conference today, Dominic Raab said scientists believe transmission of coronavirus the community is ‘almost certainly’ below the level at which the outbreak will peter out, although there is still spread in hospitals and care home.

‘Based on this advice the government has decided the measures must remain in place for at least the next three weeks,’ he told the daily Downing Street briefing.

The government is under massive pressure to set out an ‘exit strategy’ from the social distancing measures, after its own watchdog warned GDP could plunge by a third and two million people lose their jobs. It came as the UK announced 861 more deaths from the coronavirus, taking the total number of victims to 13,729.

In another dark milestone Britain has now officially diagnosed more than 100,000 people with the virus – making it only the sixth country in the world to do so. But the rising number of cases remains stable, with just 4,618 positive tests in the past 24 hours resulting in a total case count of 103,093.