Priti Patel today announced a plan to grant automatic visa renewals to migrant NHS workers during the coronavirus crisis has been extended.

Midwives, social workers and medical radiographers will all now be eligible for an automatic one year extension.

Meanwhile, Ms Patel said the families of any foreign NHS staff who die will be granted immediate and indefinite leave to remain in the UK and will not have to pay any fees.

The announcements came as the Home Secretary gave evidence to the Home Affairs Select Committee.

Ms Patel and the committee have been locked in a public row over when she would appear and her allies today accused some members of the committee of ‘showboating’. 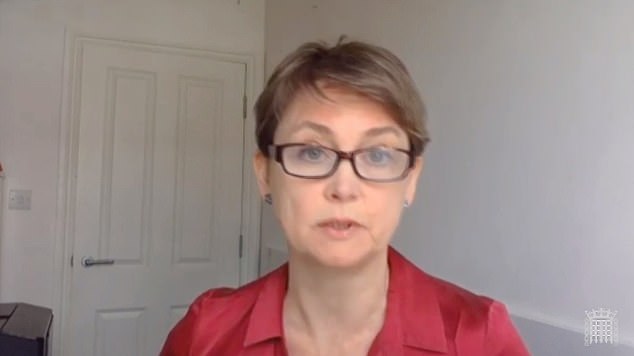 Ms Patel announced on March 31 this year that some 2,800 medics with residency documents due to expire on or before October 1 would be able to have another year added automatically.

Fears were expressed at the time that the scheme was not broad enough and would leave migrant NHS staff in some roles facing an uncertain future.

Ms Patel was previously asked by the committee in correspondence if the automatic fee-free visa extensions would apply to NHS staff on all kinds of visas.

She said in a written response published by the committee today: ‘The offer applies to any NHS doctor, nurse or paramedic who is subject to immigration control, not just sponsored migrant workers on a Tier 2 (General) or Tier 5 visa, whose visa will expire before 1 October 2020 and where the NHS Trust confirms they want to continue to employ an individual.

‘To help them work uninterrupted on battling COVID-19 and supporting the NHS, we have extended the automatic visa extension offer to a range of health professionals in the NHS and the Independent Health Sector, including midwives, social workers and medical radiographers.

Asked if the extension would also include NHS support staff like cleaners and agency workers, Ms Patel said ministers are still considering how best to support all frontline workers.

She said: ‘The Government recognises the huge importance of the health and social care sector, who are providing vital services following the coronavirus outbreak.

‘That is why we announced automatic visa extensions to NHS frontline workers, doctors, paramedics and nurses and their families.

‘We recognise that all NHS staff are contributing to this tremendous effort, and the Government is continuing to consider our options carefully and provide a wide range of support to those supporting our efforts against COVID-19.’

The Home Secretary also left the door open to including social care workers in the scheme.

She said the ‘disparate nature of the social care sector makes it a unique challenge’ but insisted ‘we keep policy under review’.

On the issue of the status of families of migrant NHS workers who die because of the current outbreak, Ms Patel said: ‘We hope the number of people who find themselves in this position is very small and our thoughts go out to the families and friends of all medical professionals who have passed away fighting to keep us safe.

‘We continue to monitor the situation carefully and consider our response. I can confirm that any dependants in this very sad position will be granted immediate indefinite leave to remain, without a requirement to pay a fee.

The NHS visa announcements came as Ms Patel clashed with MPs during the committee’s hearing as she was grilled about the Home Office’s response to coronavirus.

Ms Patel and committee chairman Yvette Cooper had a number of tense exchanges as the Home Secretary was asked to defend the government’s stance on not screening returning passengers at airports.

Allies of Ms Patel accused some committee members of ‘showboating’.

A Tory source said: ‘What you saw at Home Affairs Committee was the exact reason why Priti is the Home Secretary.

‘She’s got grip on the department at a difficult time, is on top of the details of policy she is driving through and unlike some members of the committee put the national response to this virus above party politics – all without any showboating.’