A decision on relaxing the two-metre rule will take ‘weeks’ and might not come before pubs and restaurants are due to start reopening on July 4, No10 admitted today.

Downing Street played down the chances of a swift decision despite warnings a million jobs are at risk unless there is an easing, with mass redundancies expected to be triggered within days.

Boris Johnson has urged Britons to go out and support high streets amid fears that the social distancing restrictions are inflicting catastrophic harm on the economy.

But hotels, pubs, bars, and restaurants will not return until at least next month. And the industry has delivered a desperate alert that it must have clarity on the two-metre rule by Tuesday next week, when many firms have to make rent payments for the three months from July.

There is a huge push within government to loosen the distance, with Rishi Sunak hailing the ‘positive impact’ it would have on business and jobs.

However, there are doubts in government over whether the test and trace system is ready to deal with the potential increase in cases, with the NHS app still on hold over technical and privacy problems. The WHO cautioned today that there should be no further loosening of lockdown until ‘robust’ contact tracing is in place.

Hotels, pubs, bars, and restaurants have warned they must have clarity on the two-metre rule by Tuesday next week, when many firms have to make rent payments for the three months from July 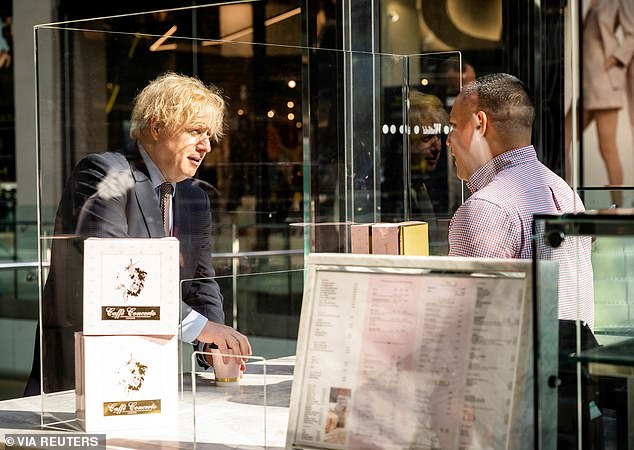 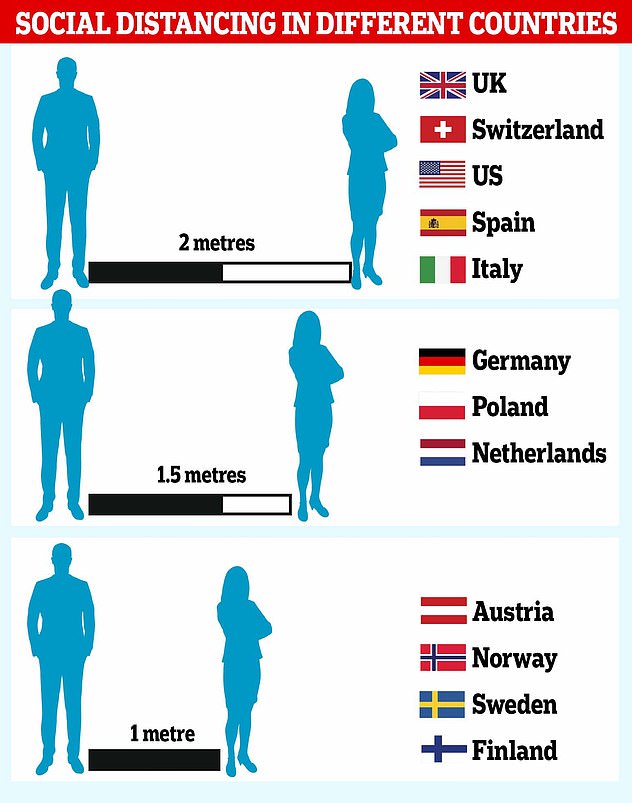 But Dr Michael Tildesley, infectious disease scientist at the University of Warwick, said ministers had to take the economic factors into consideration as well at public health.

The Government’s two-metre rule is currently under review, as ministers balance public health priorities with enabling more businesses to reopen.

Speaking on BBC Breakfast today, Dr Tildesley said: ‘The evidence is still slightly unclear – depending upon the studies it could be anything from about twice the risk to 10 times the risk.

‘So there is an increase in risk with going down to one metre.

‘But I have to stress this is purely based upon public health, and the Government has to consider economic factors before taking a decision.’

As the UK recorded its lowest daily death toll since before lockdown, with 36 recorded fatalities, the PM said last night that the country is building ‘room for manoeuvre’ by reducing infection rates.

However, scientists and the public still appear to be strongly behind the rule – with suggestions chief medical officer Chris Whitty and science chief Sir Patrick Vallance might even be on ‘resignation watch’.

The hospitality sector is planning to press the case in a meeting with business minister Paul Scully and local government minister Simon Clarke tomorrow.

‘If businesses are opening at two-metre social distance, then they’re operating at 30 per cent of their normal revenues and for a quarter of our small hospitality businesses they won’t be able to open at all,’ she told BBC Breakfast.

‘If they open at one metre with additional protections to make sure staff and customers are safe, then they can reach 60 per cent to 70 per cent of their normal revenues, and that puts them at break-even.

‘So, for many of those businesses it is literally about viability and we know that a third of businesses may not reopen as a result of prolonged closure, and that puts a million jobs at risk across the hospitality sector.’

The PM’s spokesman said this afternoon that the review will be completed ‘in the coming weeks’.

‘It will look at evidence including transmission of the virus in different environments, incident rates and international comparisons,’ the spokesman said.

Challenged that the timetable for the review was as vague as that for the NHS app, the spokesman said: ‘I wouldn’t make comparisons.’

Government sources denied that the delay to the NHS app – which has been tested on the Isle of Wight for more than a month, but still does not have a timetable for going nationwide – was holding up the two-metre decision.

‘The decision is not being held up. It started last week and work is ongoing,’ a senior source said.

In a round of broadcast interviews this morning, Mr Scully insisted the timetable for the review would be longer than that.

‘It will take a matter of weeks to do but we want to make sure we get the best scientific advice and we can look at the international comparisons,’ he told BBC Radio 4’s Today programme.

‘Clearly you have the likes of Germany, it’s one-and-a-half metres, America it is one-metre, and see how those differences land in terms of health guidance.’

Mr Scully said the Government did not want to be ‘rushed into decisions as we gradually open up the economy’.

The Government’s advice to stay 2m apart is further than the World Health Organisation’s recommendation of at least 1m, and some other countries like France and Denmark.

Mr Johnson said: ‘As we get the numbers down so it becomes one in 1,000, one in 1,600 maybe even fewer, your chances of being two metres, one metre or even a foot away from someone who has the virus is going down statistically, so you start to build some more margin for manoeuvre.’

UK should not ease 2m rule until test and trace is ready, says WHO

The UK should not lift lockdown rules until the test and trace system is ready to cope with huge numbers of people, a World Health Organization director has warned.

Dr Hans Kluge, the WHO’s chief for Europe, said the Government must only take sure-footed steps and not rush into decisions like scrapping the two-metre social distancing rule.

He said test and trace must be ‘robust’ and ready for ‘aggressive’ use if the number of new cases starts to soar again.

Dr Kluge said: ‘The key words here are to do it gradually. Do it carefully.’

His comments come after data last week showed that the NHS’s test and trace system was not able to get co-operation from a third of contacts in its first week.

Mr Sunak confirmed yesterday the Government would ‘take a fresh look’ at the regulation and suggested the decision was for ministers, not scientists, to take.

He told Sky News: ‘The Prime Minister has put in place a comprehensive review of the two-metre rule. That review will involve the scientists, economists and others so that we can look at it in the round.

‘I know that of course it’s the difference between three-quarters and maybe a third of pubs opening, for example, so it’s important that we look at it.’

The Chancellor said any decision on ending the lockdown before a vaccine was ready had an element of ‘risk’, but pointed out that other countries have lower distance requirements and were still managing to contain the virus.

‘Now that we have made good progress in suppressing the virus, we’re at a different stage of this epidemic than we were at the beginning and that enables us to take a fresh look at this,’ he said.

‘I can very much understand the impact, the positive impact it will have on business’s ability to reopen and thereby maintain the jobs that they have.’ 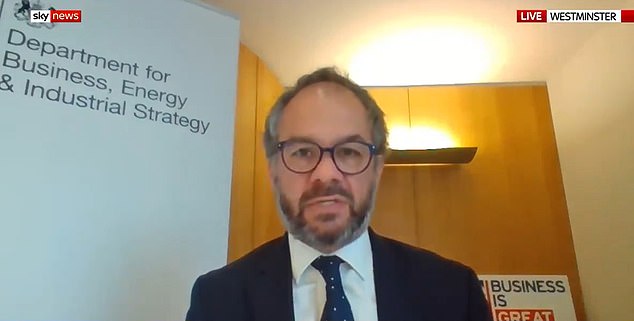 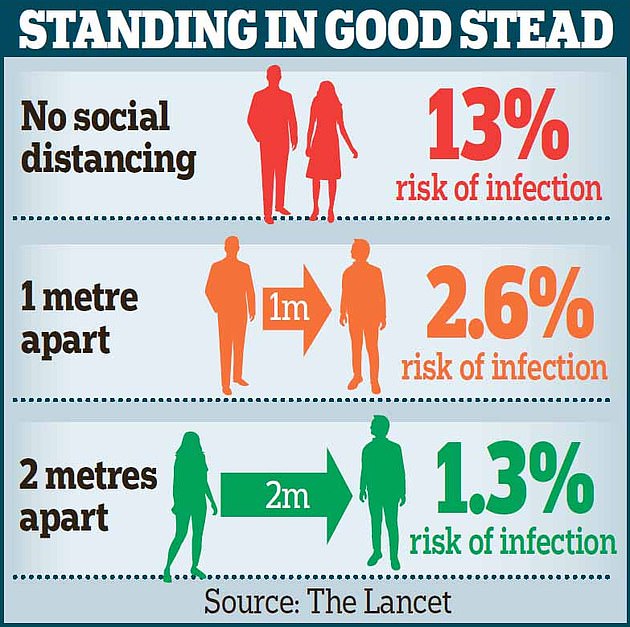 Researchers found there was roughly a 1.3 per cent chance of contracting the virus when two metres from an infected patient. But halving this gap raised the risk to only 2.6 per cent. This means the disease would spread to fewer than three in 100 people, against 13 in 100 without any social distancing at all. That equates to an 80 per cent reduction in risk

The new distancing review will take advice from experts including the Prof Whitty and Sir Patrick. The panel will also include behavioural scientists and economists.

Mr Sunak suggested that the Government would be prepared to override the views of Sir Patrick and Prof Whitty if they did not agree with a reduction.

He told the BBC’s Andrew Marr Show that scientists had made clear there is a ‘different degree of risk at different levels’, and the decision on relaxing the rule was ‘ultimately’ for ministers to make.

Former Tory leader Sir Iain Duncan Smith said: ‘If other countries are doing it successfully, we need to move now.’

Shadow justice secretary David Lammy said Labour would support a relaxation of the 2m rule if the evidence showed it was ‘the right time to do it’.