The risk of children catching coronavirus is ‘unbelievably low’, according to one of the UK’s top experts.

Eminent statistician Sir David Spiegelhalter said data has also shown that teachers do not have a greater risk of becoming infected.

The University of Cambridge professor’s testimony comes amid an explosive row over the reopening of schools next month.

Boris Johnson has faced ferocious backlash for the plan to get children in reception, year 1 and year 6 back to school, with at least 13 councils refusing to reopen amid safety fears for pupils, teachers and parents.

Bur Professor Spiegelhalter pointed out that just one out of 7million children aged four to 14 in England and Wales has died from COVID-19.

He also claimed children carry just a fraction of the viral load compared to adults, which significantly reduces their ability to fall ill or infect others.

Professor Spiegelhalter told the BBC: ‘There have been, based on the data so far, extremely low risks to children. Out of 7million five to 14-year-olds in England and Wales, so far the number of death certificates revealed with Covid on it is one. 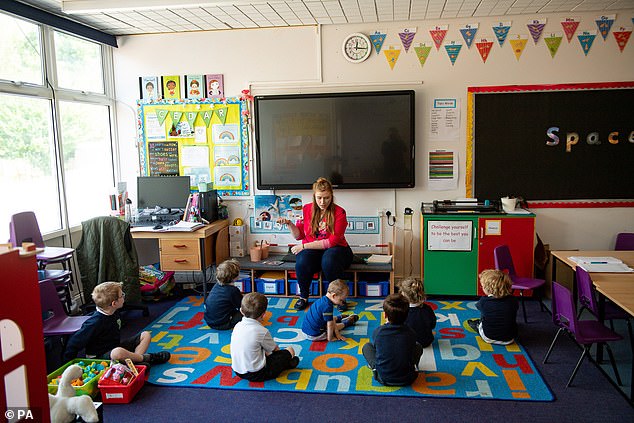 Children of essential workers socially distance whilst in lesson at Kempsey Primary School in Worcester, as plans for more children to return next month hang in the balance 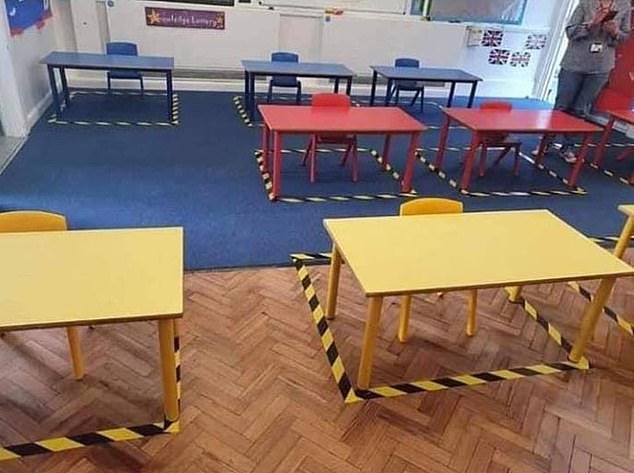 Holywell Village First School in Northumberland has revealed its social distancing plans when schools reopen after lockdown – but at least 1,500 primary schools have already said they will not reopen fully

‘There will be more [that haven’t been confirmed], but there is still an extremely low risk. Of course we must remember this group of kids are staggeringly safe in general, less than one in 10,000 die every year. Nobody’s ever been safer in the history of humanity than this group of kids.’

Professor Spiegelhalter said that at least one child had died from a rare inflammatory illness linked to coronavirus, but reassured parents that the risk of the complication would now be ‘much lower now the epidemic in the community is under control.’

Which councils have refused to obey the Government and open primary schools on June 1? 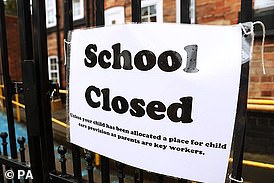 Have expressed ‘reservations’ but are leaving it to schools

Asked about whether teachers and parents were being put at risk by schools reopening, the Cambridge professor said data suggested not.

He added: ‘The Office for National Statistics analysed Covid risks by occupation – some have higher risks, including bus drivers and care home workers.’ But teachers were not included in this category, he said.

‘Of course people are anxious about the rest of the family, but in healthy young parents aged between 20 and 40, there have only been about 30 death so far out of 30,000 who don’t have existing conditions.

‘There’s about a three in a million chance of risk of death. That’s a measurable risk, but in a sense it’s a manageable risk… it’s not overwhelming at all.’

Because youngsters get much more mild symptoms, the results raised fears children could become super-spreaders.

However the statistician said the data clearly had been misinterpreted because it actually showed children have just a quarter of the viral load of adults.

He added: ‘One of the big problems with this epidemic is that claims are being rushed out. Peer -review [when other scientists scrutinise research] has just disappeared from scientific analyses and yet they get a lot of media coverage.

‘It is widely claimed that children have got the same viral load as adults, from a German study.

‘If you look at that study it shows that is clearly not the case, children have about a quarter of the viral load according to the study. It’s a very poor statistical analysis.’

Meanwhile, the Prime Minister’s plans to reopen schools on June 1 appeared to be collapsing today after at least 13 mainly Labour councils refused to comply.

It was revealed that up to 1,500 English primary schools are now expected to remain closed in 12 days’ time despite millions of children being at home for more than eight weeks.

Justice Minister Robert Buckland admitted this morning that the June 1 reopening date may now not be ‘uniform’ across England – as the Prime Minister’s pledge descended into chaos amid mass dissension from school staff, unions and local councils.

A survey of 20,000 parents by Childcare.co.uk found that 62 per cent of the parents believe it won’t be safe to return to school or any form of childcare until at least September.

A further 10 per cent stated they don’t think it will be safe until October 2020.

Millions of parents are in limbo as it remains unclear if children in reception, year 1 and year 6 will be returning to school full time in less than a week.