Coronavirus UK: Vehicle use now at highest level since 23 March

Drivers have queued round the block at the only Burger King drive-through open in the UK after health chiefs today warned that ‘worrying’ data showed vehicle use was at its highest since lockdown began.

Staff at the fast food restaurant in Havant were seen wearing masks and gloves over their uniforms as they handed burgers and fries to customers in Hampshire on Wednesday afternoon.

It comes as the Director of Heath Protection for Public Health England (PHE), Yvonne Doyle, said there were more motorists than on March 23 – the day the lockdown started.

She told the daily Downing Street briefing the numbers were ‘worrying’ and urged people to only leave their homes for ‘necessities’ amid fears failure to stick to the rules could result in a second wave of coronavirus.

In addition to the risks presented by inessential travel, PHE has warned that those who are seriously overweight are at a higher risk of severe illness from COVID-19. Journeying out for high calorie food, therefore, compounds these health risks.

As well as Burger King, many other fast food chains and pubs are clamouring to welcome customers, with Wetherspoon’s claiming its bars and hotels would re-open ‘in or around June.’ 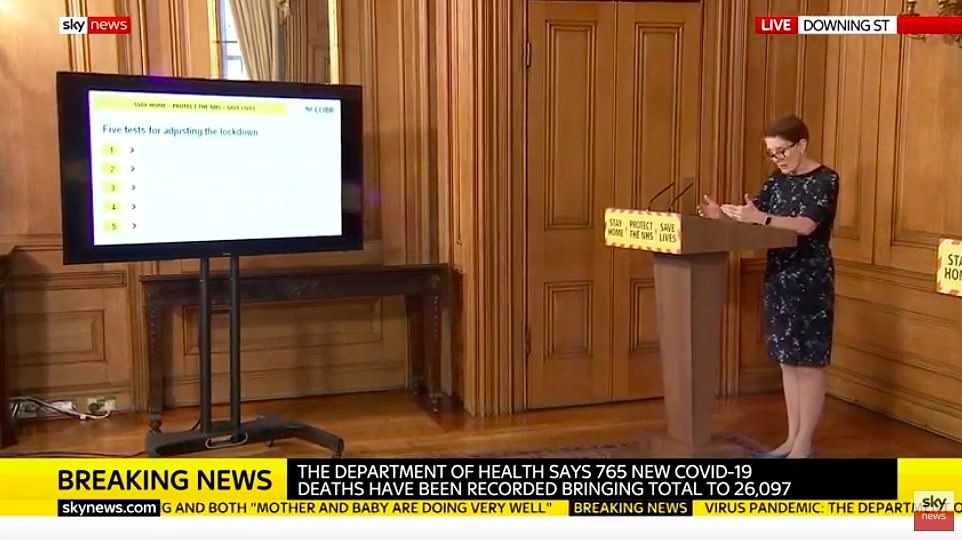 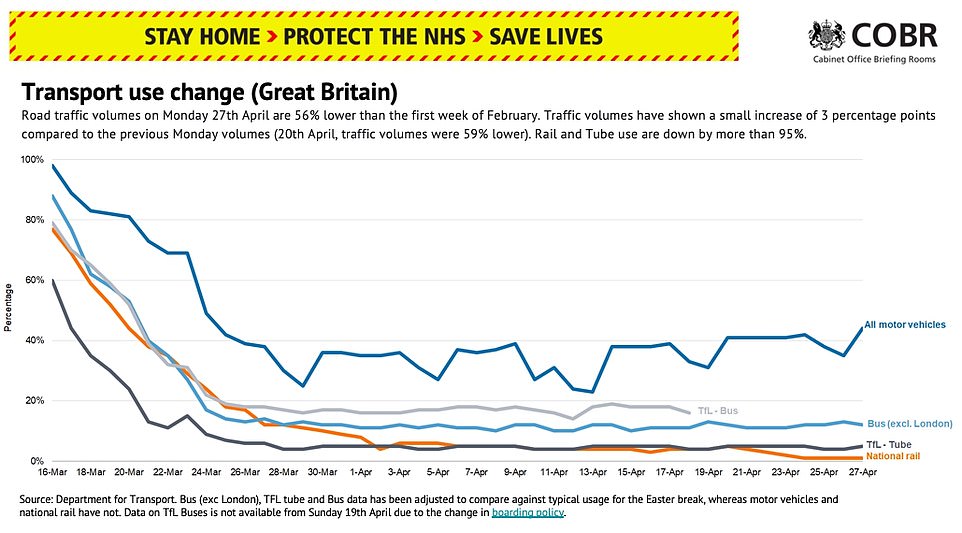 JD Wetherspoon today said it aims to raise £141million as part of a share placement scheme so it can re-open as the summer begins.

The company said it would raise the amount through the issue of up to 15.7 million shares at 900 pence per share.

Chairman Tim Martin was forced to close all 900 pubs and furlough 40,000 workers before Britain went on lockdown.

He was among the last on the High Street to shut up shop, with drinkers downing their final pints on March 20 – just three days before a shutdown was imposed by law.

Asked about the re-opening of pubs, beaches and garden centres, he told the Downing Street press conference: ‘At various different points they might involve the congregation of individuals and one has to be very painstaking and careful about thinking through some of these before we make the wrong move to relax measures.

‘I think we have to be extremely surefooted and extremely painstaking about this.

‘This virus will absolutely come back … this is with us for quite some time, potentially for as long as until we get a vaccine. 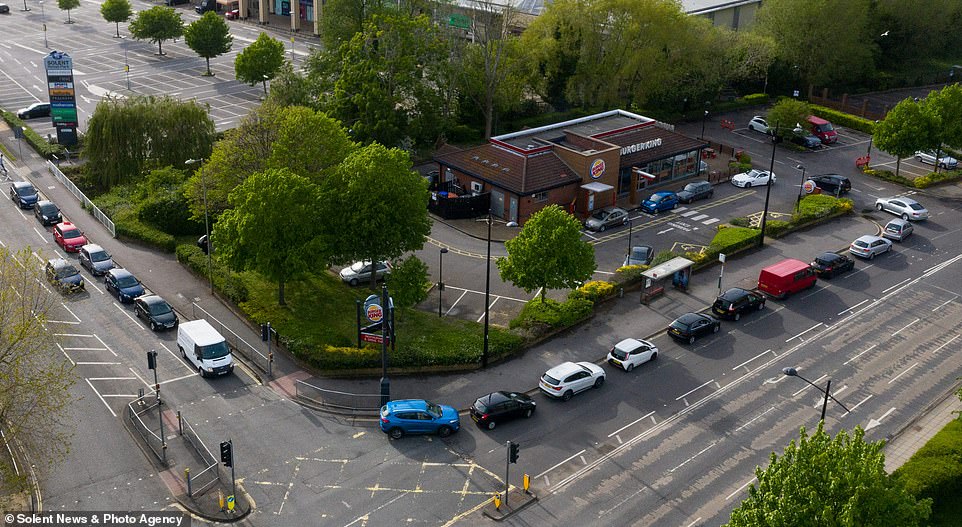 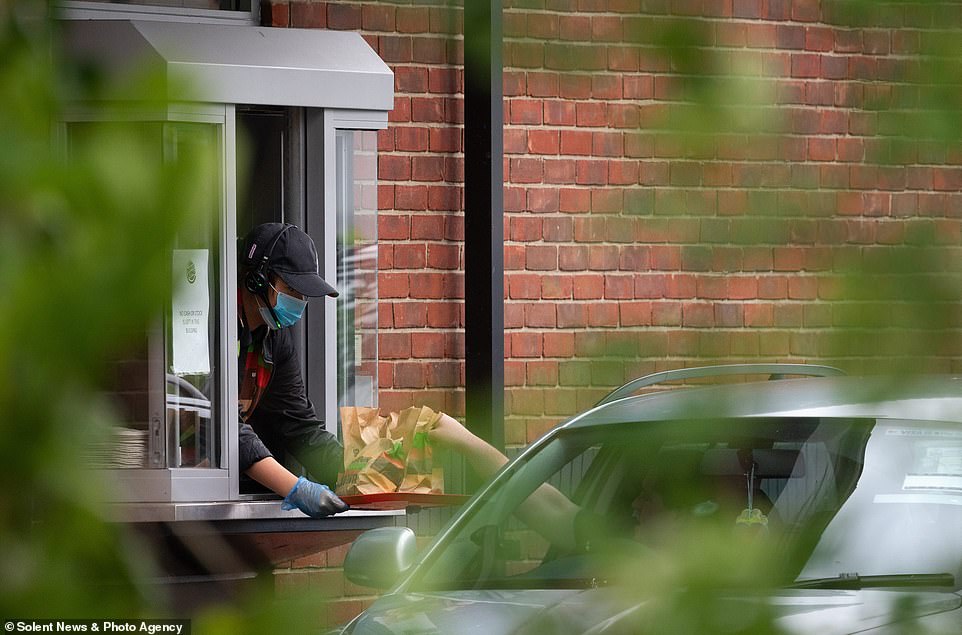 Staff could be seen serving drivers with PPE on, which includes a mask and gloves over their standard Burger King uniform from the kiosk

‘So from that perspective we have to be really careful and really surefooted and I’m just not going to suggest for a moment that any of this should be rushed.’

Burger King has said it is trialling the reopened drive-through at the Hampshire site with the view that more could reopen in the coming weeks.

Meanwhile, fellow fast food giant KFC has announced it will reopen another 80 branches for delivery as Britain continues to edge out of lockdown.

The fried chicken chain said 100 of its stores up and down the country will be able to bring orders to customers’ homes from next Monday.

Meanwhile, DIY retailer Wickes has revealed it will be reopening six stores with strict social distancing measures in place from tomorrow in Pudsey, Cheltenham, Preston, Sevenoaks, Cricklewood and Hailsham. 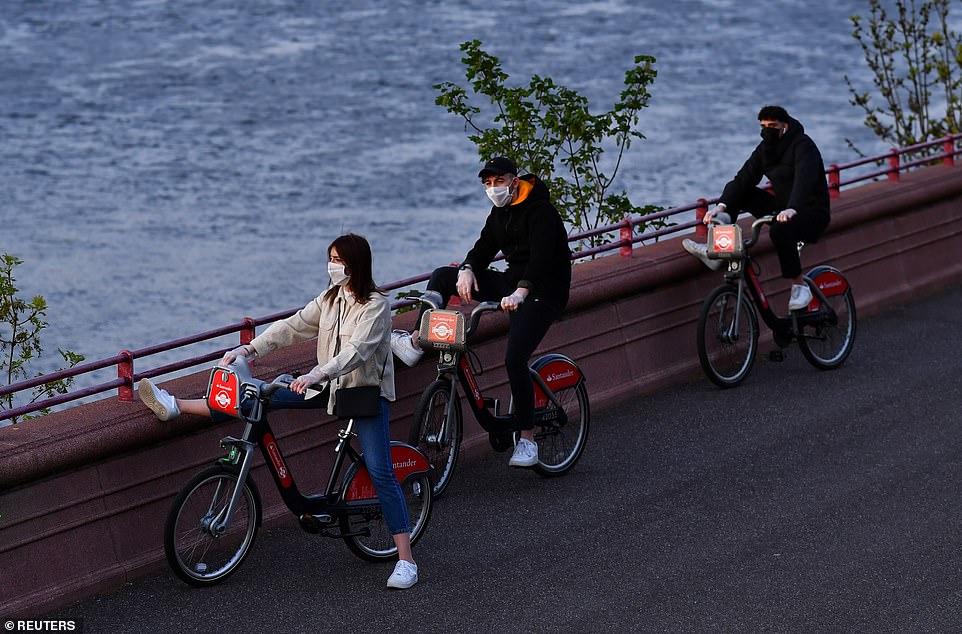 Cyclists are seen wearing protective face masks in Battersea Park during the spread of the coronavirus disease. Director of Heath Protection for Public Health England (PHE), Yvonne Doyle, today urged people against travel which was inessential 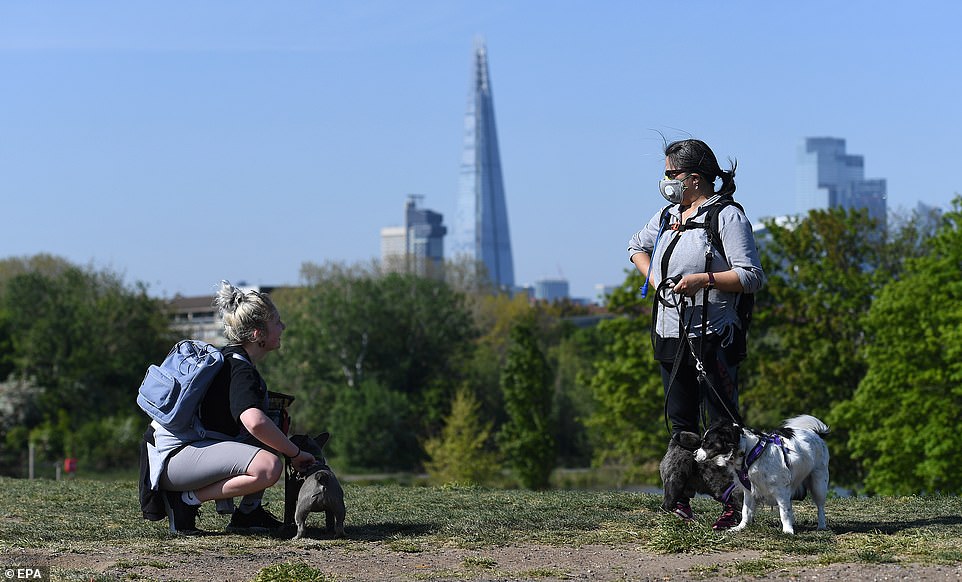 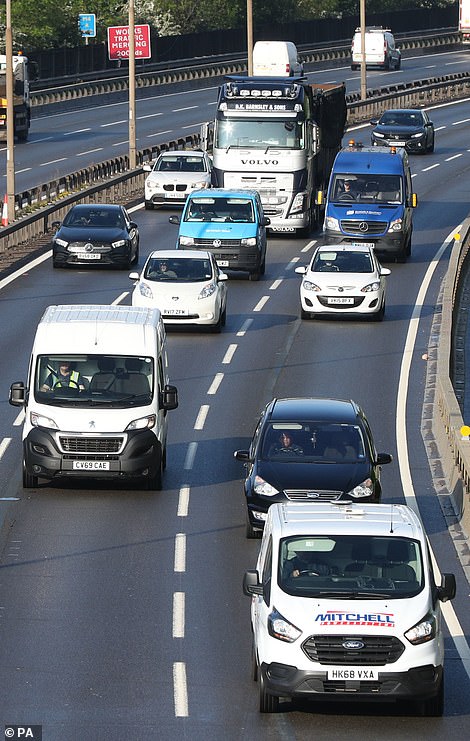 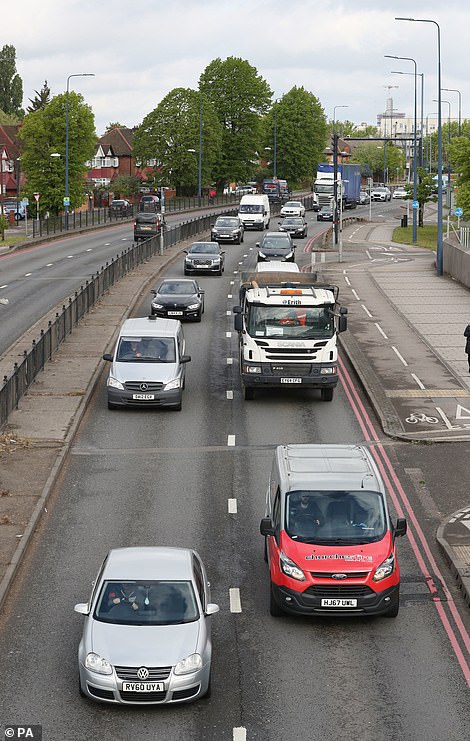 Traffic on the M4 motorway inbound towards London at Datchet, near Windsor, on Wednesday and on the A40 Western Avenue towards the city in Acton, northwest London 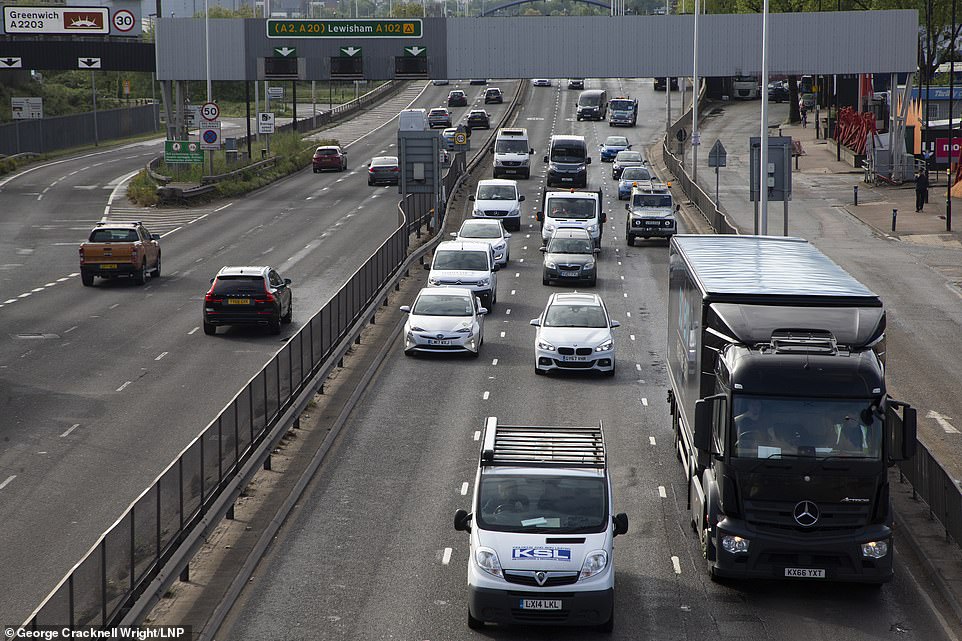 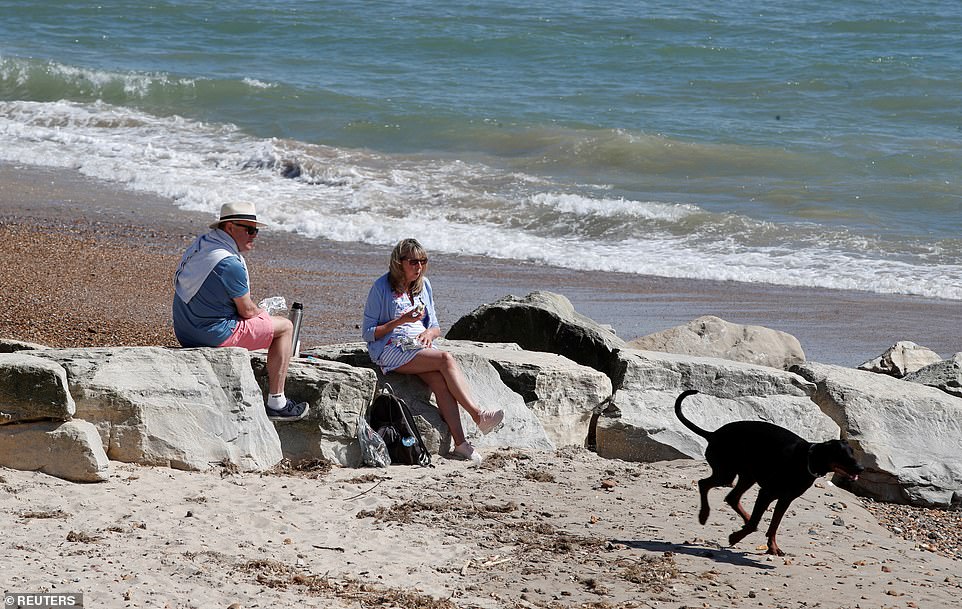 Phone data has also suggested Britons are making more journeys on the roads than they were a week ago.

‘This is a transport slide which shows the use of various forms of transport,’ she told the press conference.

‘As we have seen up to now very dramatic falls in most modes but there has been an uptick in motor vehicles. 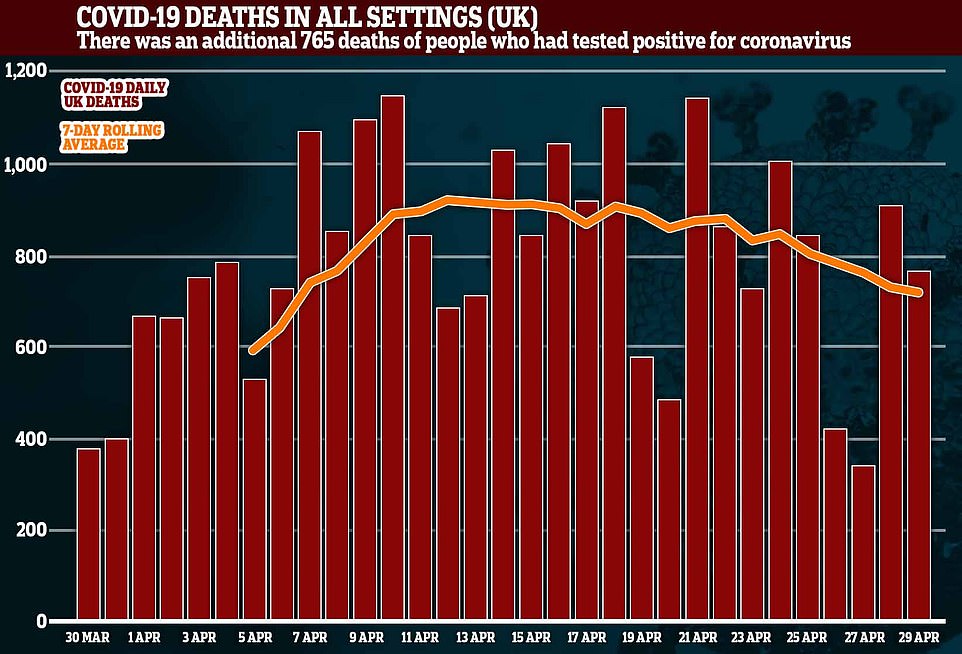 ‘The message here really is that we are still passing through this peak and this use of motor vehicles is the highest working day use since March 23 and we really have to be vigilant that most people are making use efforts to stay at home and save lives and this is slightly worrying.

‘So please do stay at home, protect the NHS, save lives and go out for the necessities and the transport data will reflect that.’

The government’s lockdown rules state that people should only leave their home for one of four reasons: To get food supplies, medicine, to exercise or to get to work if they cannot work from home.

There is growing evidence to suggest that some Britons have had enough of lockdown restrictions with more people also being seen in the nation’s parks than in previous weeks.