Coronavirus UK: Who would take over from Boris Johnson?

In a Twitter video posted on Friday from quarantine in No11, where he has been in self-isolation, an exhausted-looking Mr Johnson revealed he was still suffering from a high temperature

Downing Street insisted that Boris Johnson remained in charge of the UK’s coronavirus battle today despite being hospitalised for treatment.

But the Prime Minster’s admission to St Thomas’s Hospital in London meant that Dominic Raab chaired this morning’s daily meeting of ministers.

The Foreign Secretary – who is also First Secretary of State –  has been appointed the senior minister who takes over if the PM’s health fails to the point where he cannot lead the Government.

Mr Johnson is thought to have been given oxygen treatment, with claims he had ‘risked his health’ by keeping up a frantic workrate during more than a week in self-isolation in Downing Street.

This evening Number 10 announced that the Prime Minister had been admitted to the intensive care unit.

The UK does not have a deputy prime minister but first secretary has been used by a number of governments to show who is second in command.

However, it is not immediately clear what would happen if Mr Raab also became incapacitated, with the UK not having a formal system of succession like other countries, for example the US.

Downing Street is said to have drawn up plans to ensure the continuation of government in all circumstances but details have not been divulged publicly.

Mr Raab’s status as the person waiting in the wings reportedly sparked furious rows within the government a fortnight ago, with other ministers adamant Michael Gove, the Minister for the Cabinet Office, should be the one to take over.

But Number 10 is likely to face intense pressure in the coming days to set out exactly what would happen if Mr Johnson and other senior ministers can no longer work. 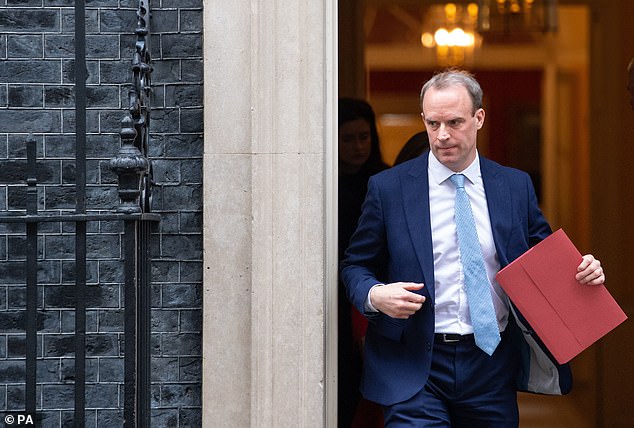 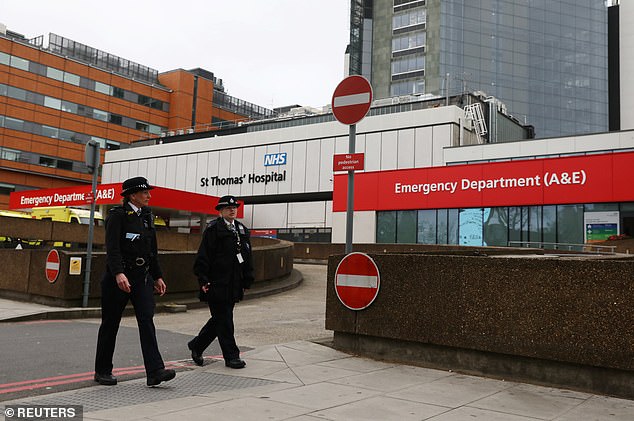 Police officers are seen today outside St Thomas’ Hospital in London, a short distance from Downing Street, after Mr Johnson was admitted for tests on Sunday 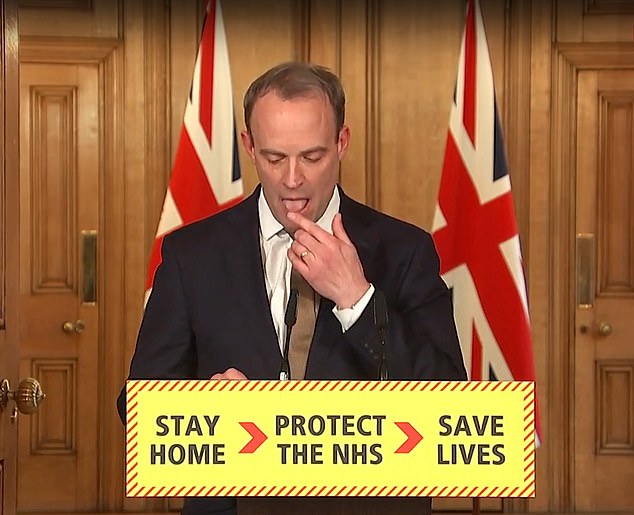 In a coronavirus press conference last week, Mr Raab went viral after licking his finger to turn a page of his speech – Government advice is to avoid touching your face

How are ministers ranked?

3. Rishi Sunak, Chancellor of the Exchequer

5. Michael Gove, Chancellor of the Duchy of Lancaster

18. Baroness Evans, Leader of the House of Lords

At the weekend it was revealed that two of the most senior Ministers leading the Government response to the coronavirus crisis are locked in battle over when to lift the economically devastating lockdown.

Chancellor Rishi Sunak has made ‘robust’ representations to Health Secretary Matt Hancock, arguing that unless a path is mapped now for a swift return to normal economic activity it could cause lasting damage to the country.

Government critics of Mr Hancock argue his ‘careerist’ fear of being personally blamed for a collapse in the NHS is blinding him to the dangers of a protracted lockdown.

But allies of Mr Hancock hit back, saying: ‘He is just doing his job, which is to protect the NHS.’

One MP suggested that the PM was too keen to emulate his hero, Winston Churchill and should rest.

But Downing Street described last night’s shock move as a ‘precautionary step’, insisting that he continued to lead the Government, and remained in touch with ministers and senior officials.

Communities Secretary Robert Jenrick stressed it was not an emergency admission and that he expected him to be back in Downing Street ‘shortly’.

‘He’s been working extremely hard leading the Government and being constantly updated,’ he told BBC Breakfast.

‘Obviously today he’s in hospital having the tests but he will continue to be kept informed as to what’s happening and to be in charge of the Government.

‘I’m sure this is very frustrating for him, for somebody like Boris who wants to be hands on running the Government from the front, but nonetheless he’s still very much in charge of the Government.’

In a Twitter video posted on Friday from quarantine in No11, where he has been in self-isolation, an exhausted-looking Mr Johnson revealed he was still suffering from a high temperature.

Experts say there is a risk of pneumonia when a temperature lasts more than a week. There have been claims Mr Johnson has been coughing heavily during conference calls. 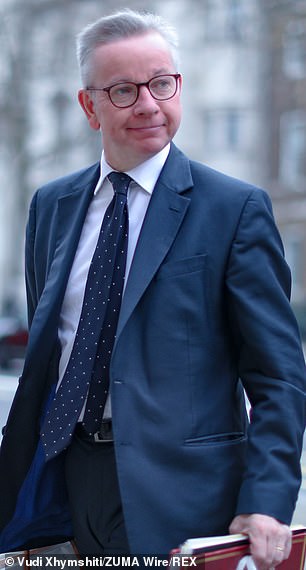 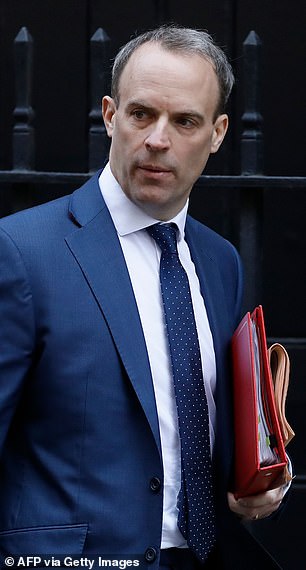 Boris Johnson’s positive test for coronavirus has sparked scrutiny of the government’s line of succession plans. Downing Street said Dominic Raab (pictured right) will take over if the PM is incapacitated but some ministers have pushed for Michael Gove to be given the job 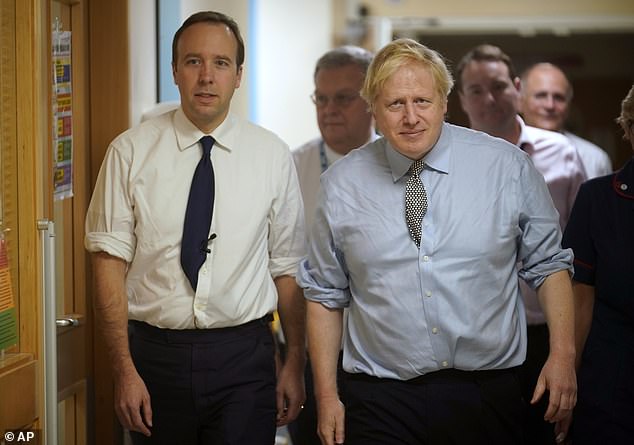 The UK has four great offices of state: Prime Minister, Chancellor of the Exchequer, Foreign Secretary and Home Secretary.

But beyond that there is no public plan on the line of succession should the PM be struck down.

The US is one of a number of countries which has such a plan: If the President cannot work, the Vice President takes over and so on down a long list of government figures.

The US also has a ‘designated survivor’ – someone in the line of succession who is told to stay away from major events like inaugurations and State of the Union Addresses in case something bad happens and they can then step in as commander in chief.

Successive prime ministers have resisted calls to formally set out succession plans because of the message they fear it would convey to the public and because of the damage it could do to their political standing.

But there have been repeated attempts by backbench MPs to pass a law formalising the succession issue.

Mr Raab, Mr Gove, Chancellor Rishi Sunak and Health Secretary Matt Hancock are widely seen as the most important ministers in the government at the moment in terms of combating coronavirus.

Each chairs a committee coordinating different parts of the government’s response to the crisis.

Mr Gove’s is focused on public sector preparedness, Mr Hancock’s is focused on NHS capacity, Mr Raab’s deals with the overseas response and Mr Sunak’s looks at the economy.