Americans across the country are celebrating a very different Memorial Day this year amid the coronavirus pandemic with soldiers and family members wearing masks as they attend socially distanced ceremonies to pay tribute to the servicemen who lost their lives serving their country.

This year the traditional Memorial Day events, where thousands descend upon cemeteries to honor the lives lost while serving in the US military and plant American flags at their gravestones, have been canceled to prevent the spread of the COVID-19.

The National Cemetery Administration announced it will not host public events this Memorial Day and families can individually visit graves if they maintain social distancing.

A U.S. Army soldier stands guard in front of rows of empty graves at Arlington National Cemetery, which is closed to the public, but hosted a small service for the president and is allowing for loved ones to gather in small groups 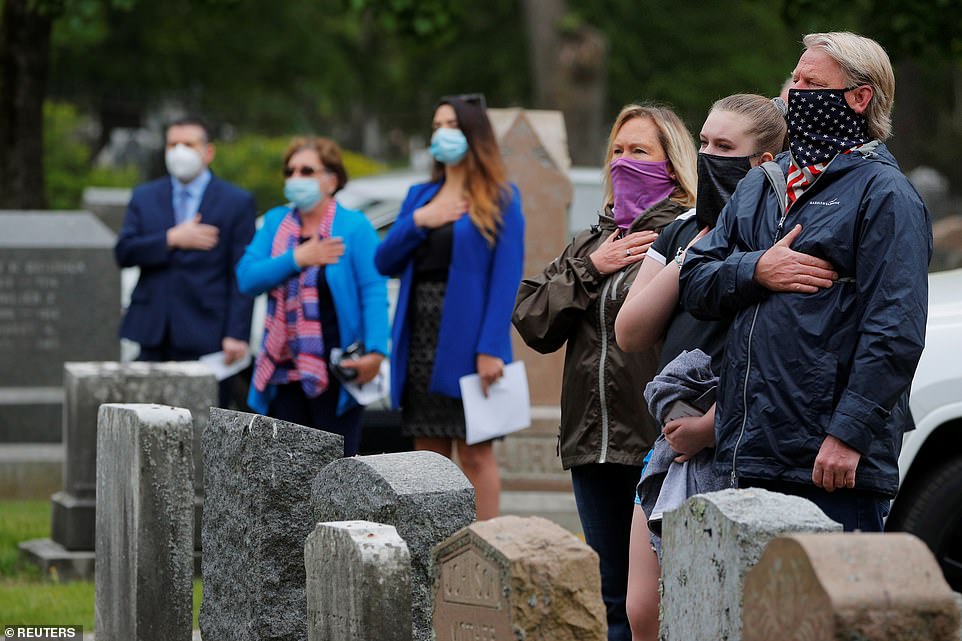 Americans across the country are celebrating a very different Memorial Day this year amid the coronavirus pandemic. Kim Zachular (third from right) pictured paying tribute to her father, a Korean War veteran, who died of COVID-19, during a ceremony at Glenwood Cemetery in Everett, Massachusetts on Monday 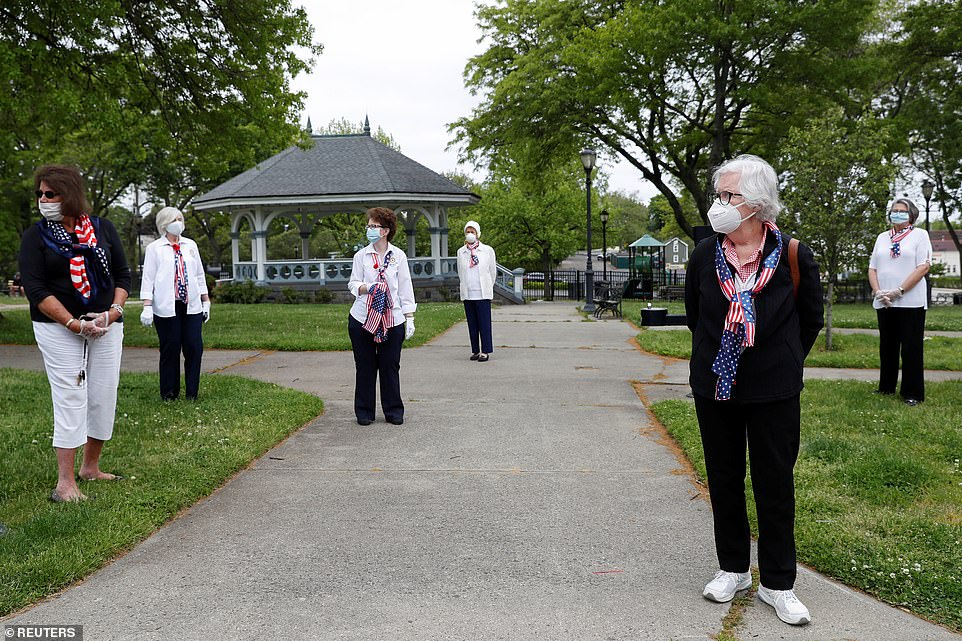 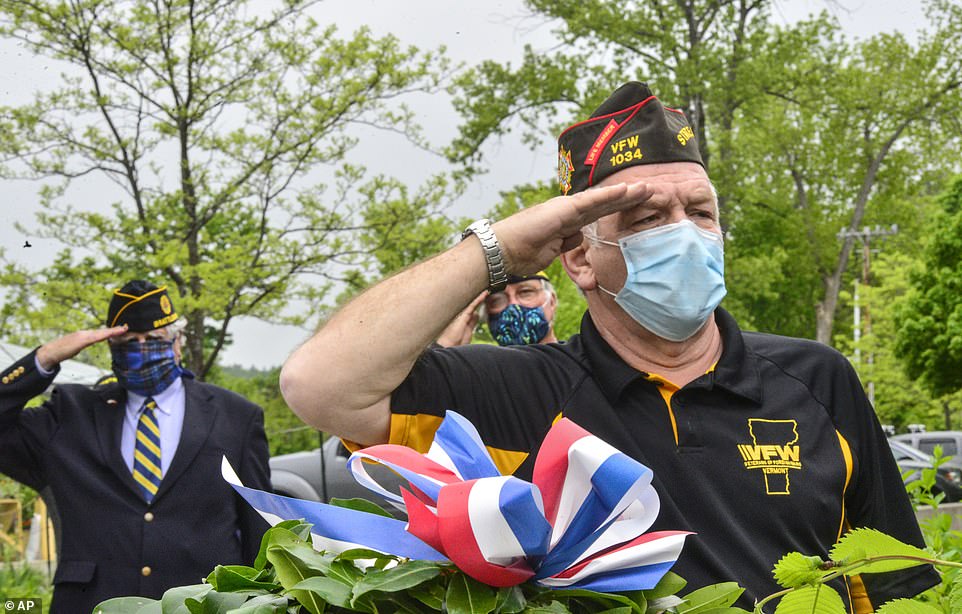 Sam Haskins, past state commander of Post 1034, in Brattleboro salutes during a small service in Brattleboro, Vermont on Monday in honor of Kyle Gilbert, who died in August 2003 during an attack in the Al Mansour district of Baghdad 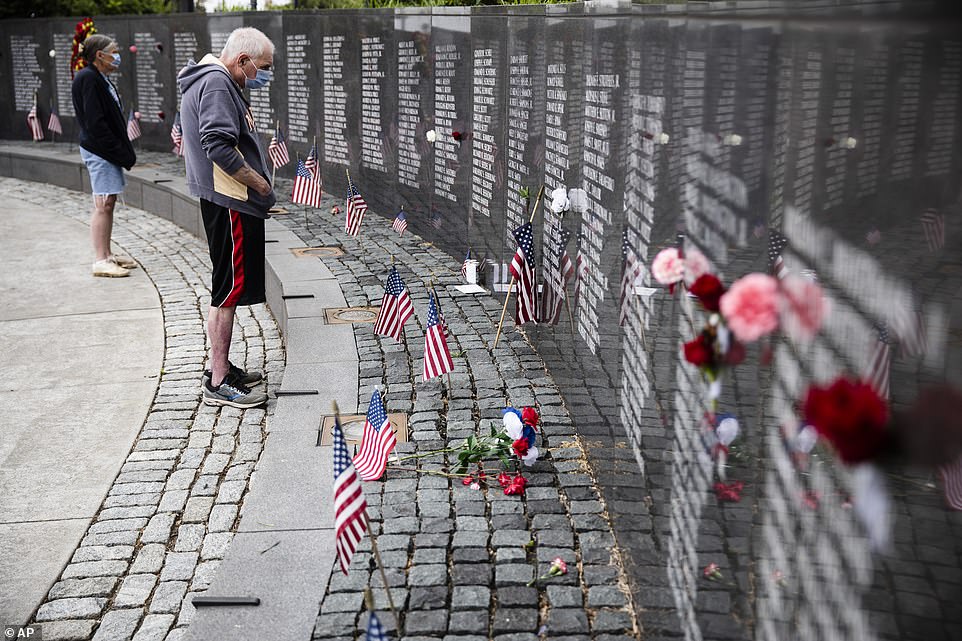 United States Marine Corps veteran Ralph Reilly and his wife Kathleen, wearing a protective face masks as a precaution against the coronavirus, reads each of the names etched on the Vietnam War Memorial, in Philadelphia on Monday 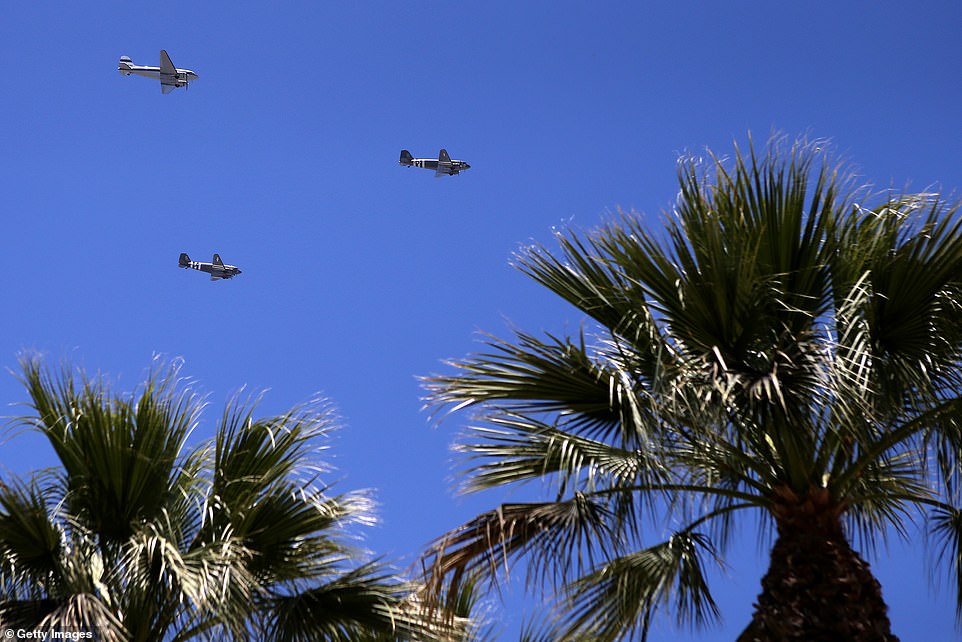 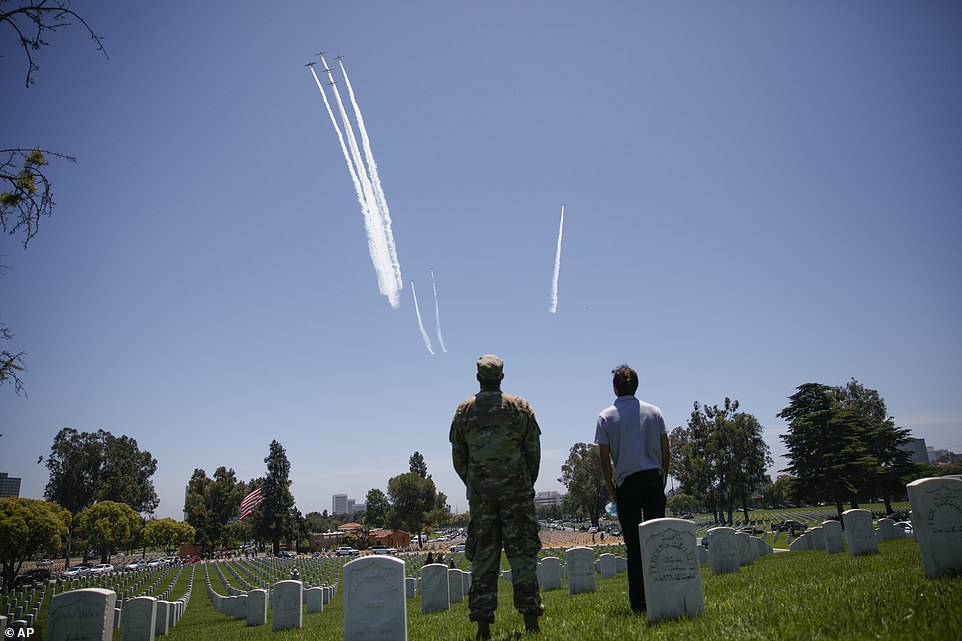 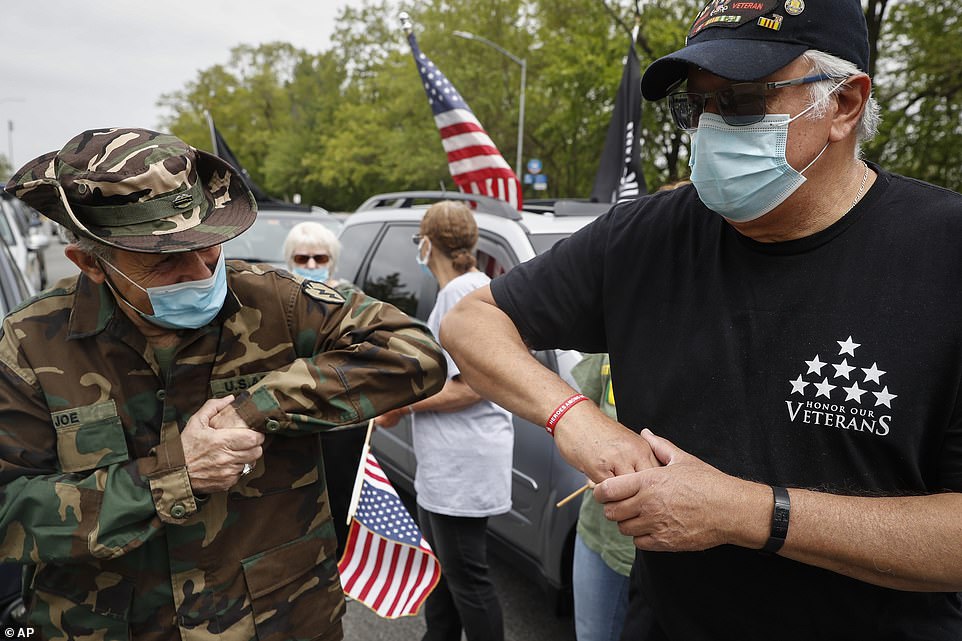 Joe Torre, 75, left, and Kicky Clavell, 67, greet one another as their motorcade stops outside the VA Medical Center before a wreath laying ceremony on Monday in Brooklyn, New York 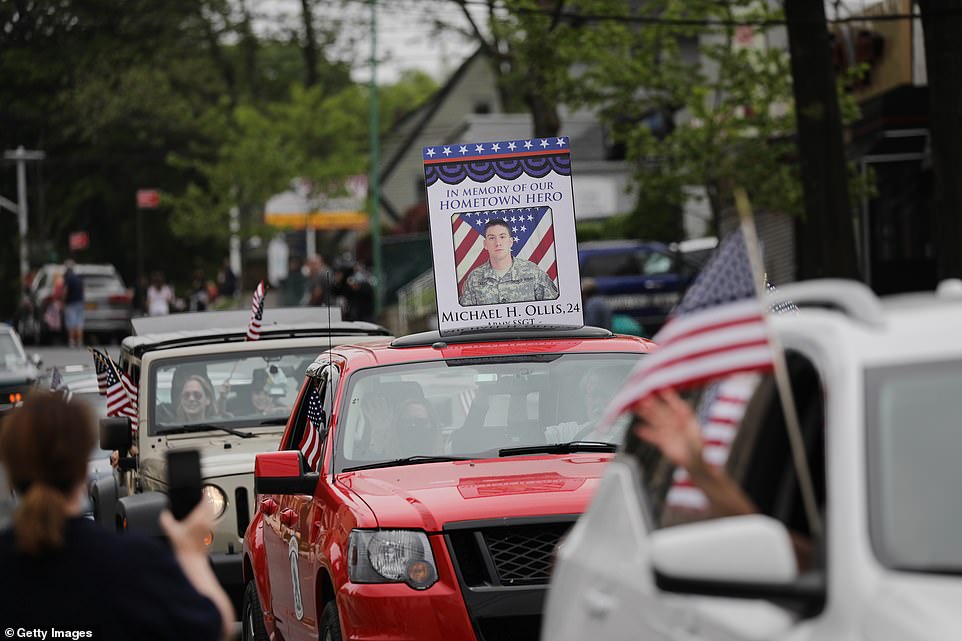 In New York locals participated in the annual Memorial Day parade on Staten Island where dozens of cars and nearly 100 members of the patriotic motorcycle group Rolling Thunder joined the event. This year’s parade was scaled back in size and in person contact was avoided 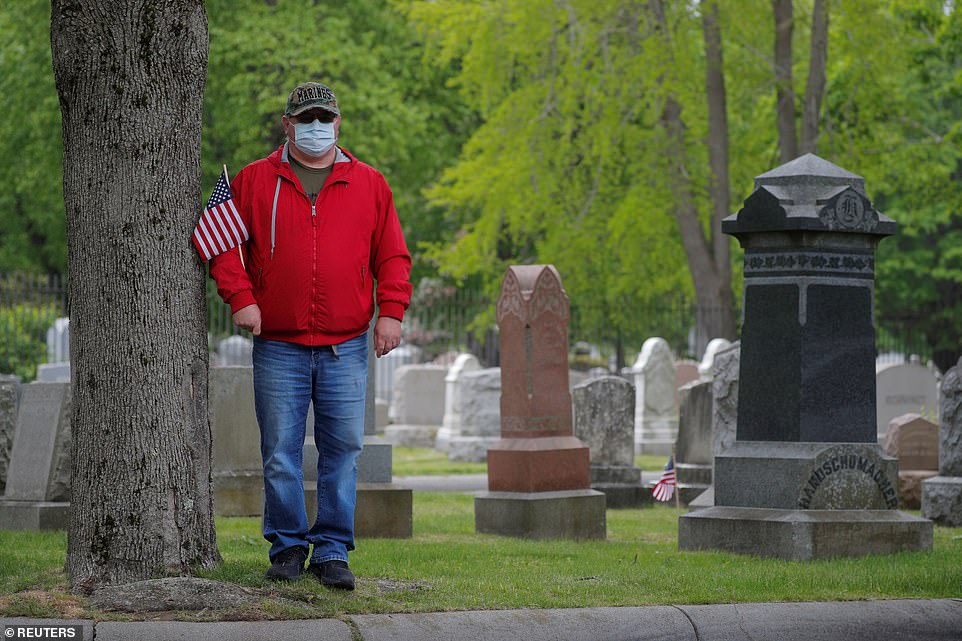 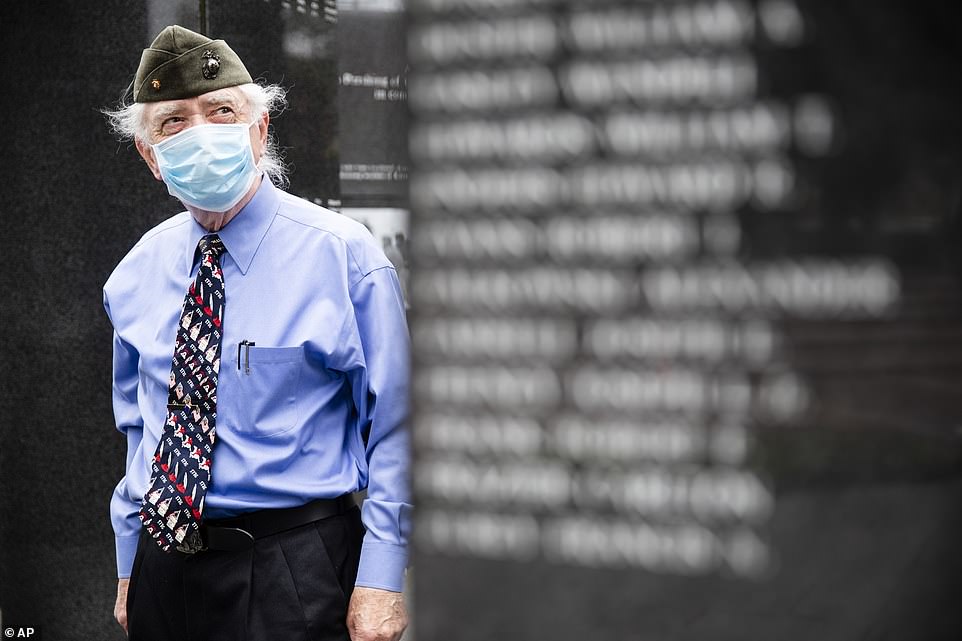 United States Marine Corps veteran John Kline wearing a protective face mask as a precaution against the coronavirus, pays his respects at the Korean War Memorial in Philadelphia

At a funeral for decorated World War II veteran Command Sgt. Major Robert Belch at Arlington, masked members of the Army’s Third Infantry regiment carried his casket but did not hand it over to the next of kin as per custom. Instead the casket was gently laid next to the grave to avoid physical contact.

‘It means a lot to me that we can still be there for the families even though, you know, we are dealing with a lot as a country right now and we are able to stay constant and maintain, you know, the level of professionalism and be there for those families as they lay their loved ones to rest,’ Capt. Doug Rohde, who returned from deployment in Iraq last October and is now the commander of Bravo company with the Old Guard, said to CNN.

He said in some cases his unit conducts funerals alone because family members of the fallen cannot travel to Arlington due to coronavirus safety concerns.

Arlington National Cemetery is closed to the public completely except for family members with loved ones buried there.

‘Our heart goes out to them for not being able to be there with their loved one as they are laid to rest, but I hope they take comfort knowing the Old Guard was there, you know, doing the funeral the exact same way to the same level of professionalism with dignity and honor for their loved one,’ Rhode said.

Across the country Americans observed the holiday in special ways. In Staten Island the annual Memorial Day parade went on, but was scaled back in numbers. This year attendees participated by driving down streets in a parade line waving flags and photos of their loved ones who served in the military.

In Edensburg, Pennsylvania locals also celebrated Memorial Day with a parade where people rode out in their cars and tractors and residents wore masks as they stood on their front lawns and waved to participants.

Locals in Boston, Washington D.C. and Philadelphia were seen wearing masks and practicing social distancing as they visited war memorials. 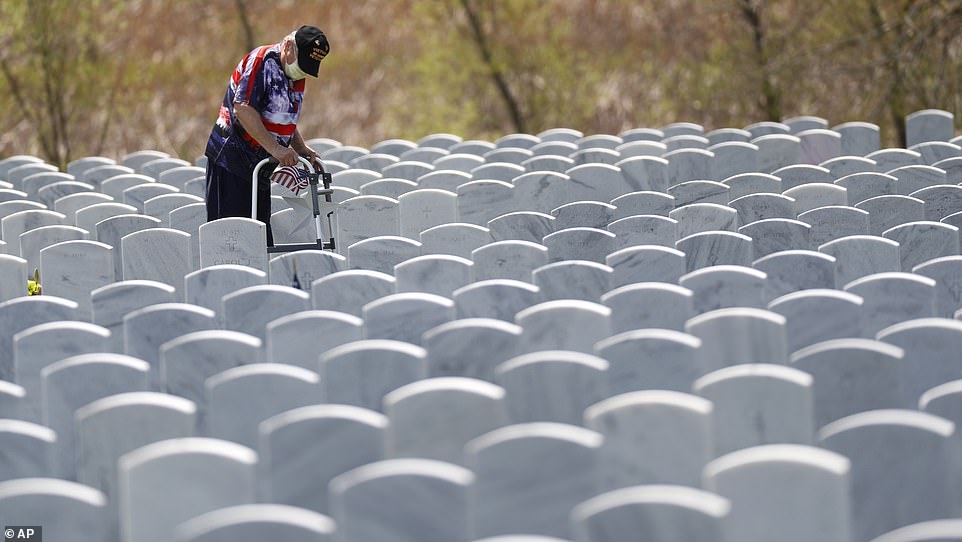 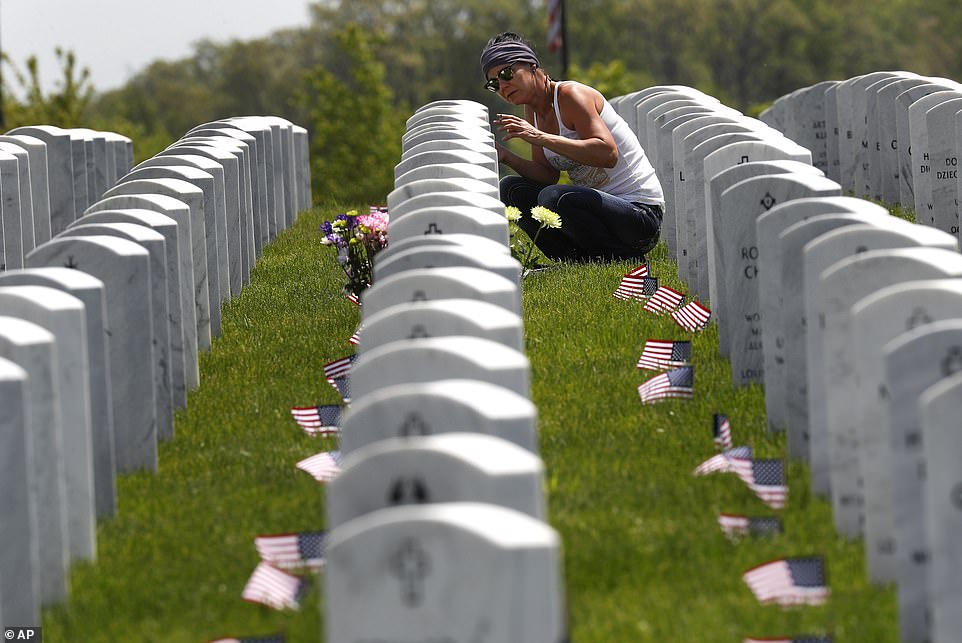 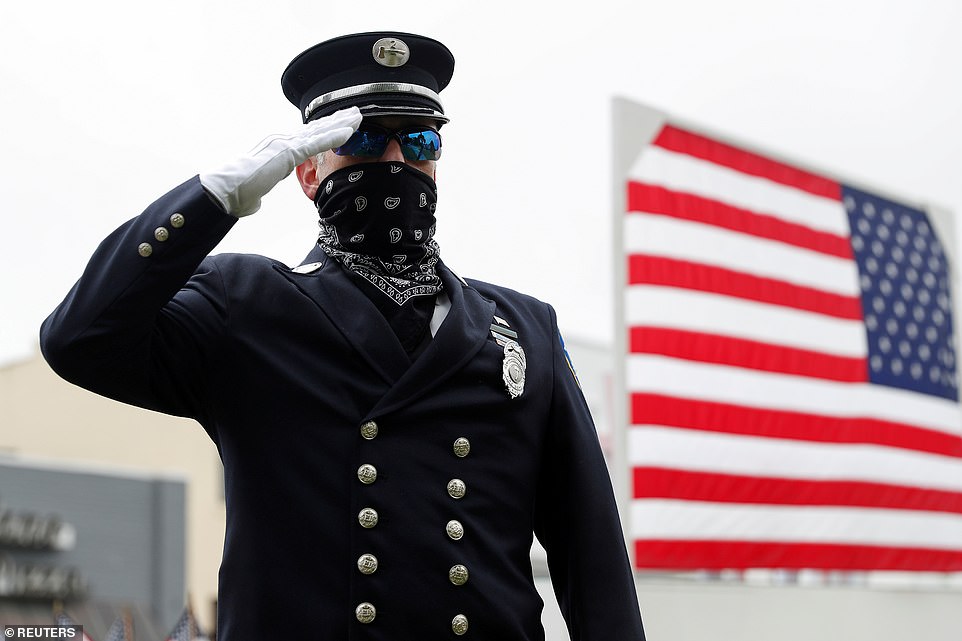 Aan Gragossian, a volunteer fireman for the Manhasset-Lakeville Fire Department, who said he survived the coronavirus disease (COVID-19) after spending close to two weeks in the hospital, salutes during a Memorial Day event in Manhasset, New York 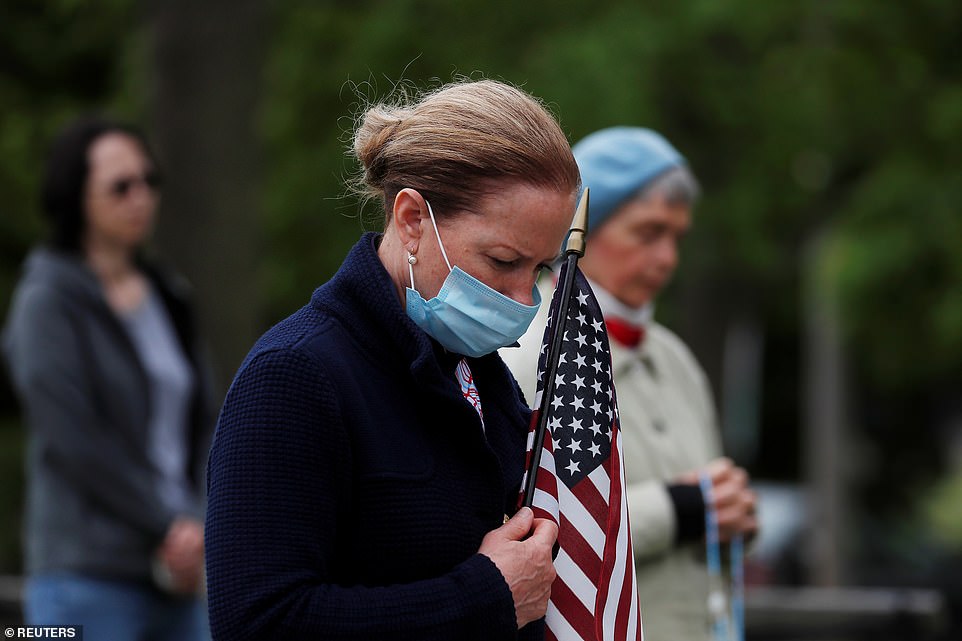 A woman wearing a protective face mask holding a U.S. flag stands at social distance during a ceremony in Manhasset, New York 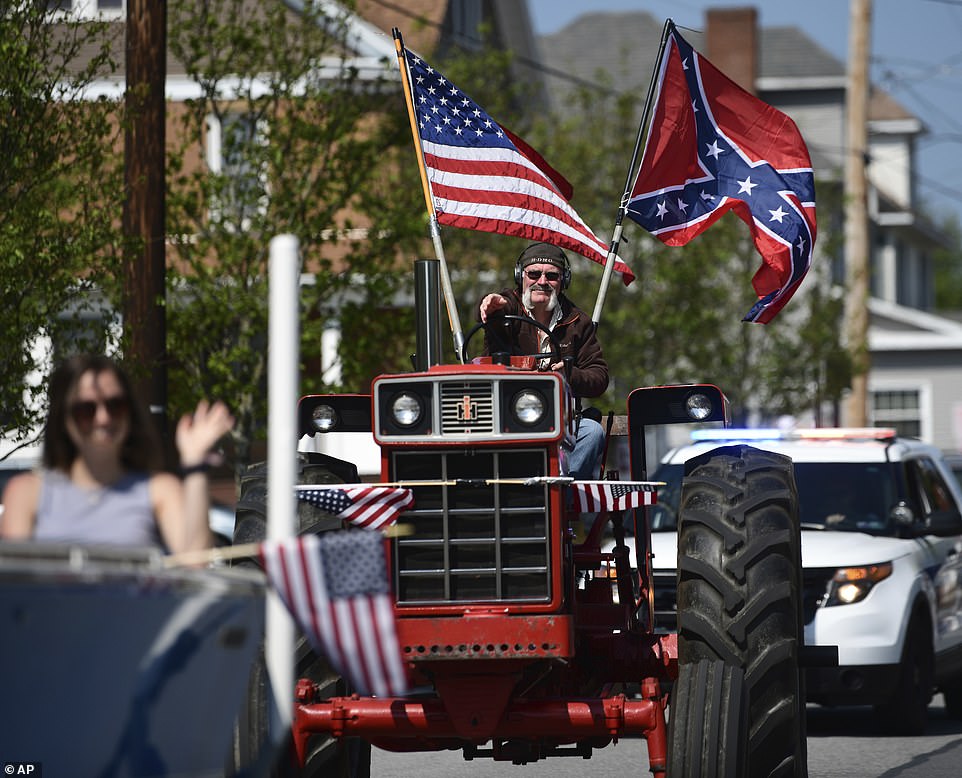 In Edensburg, Pennsylvania locals celebrated Memorial day with a parade. Tim Thomas of St. Augustine pictured in his 1975 farm tractor decked out with American flags 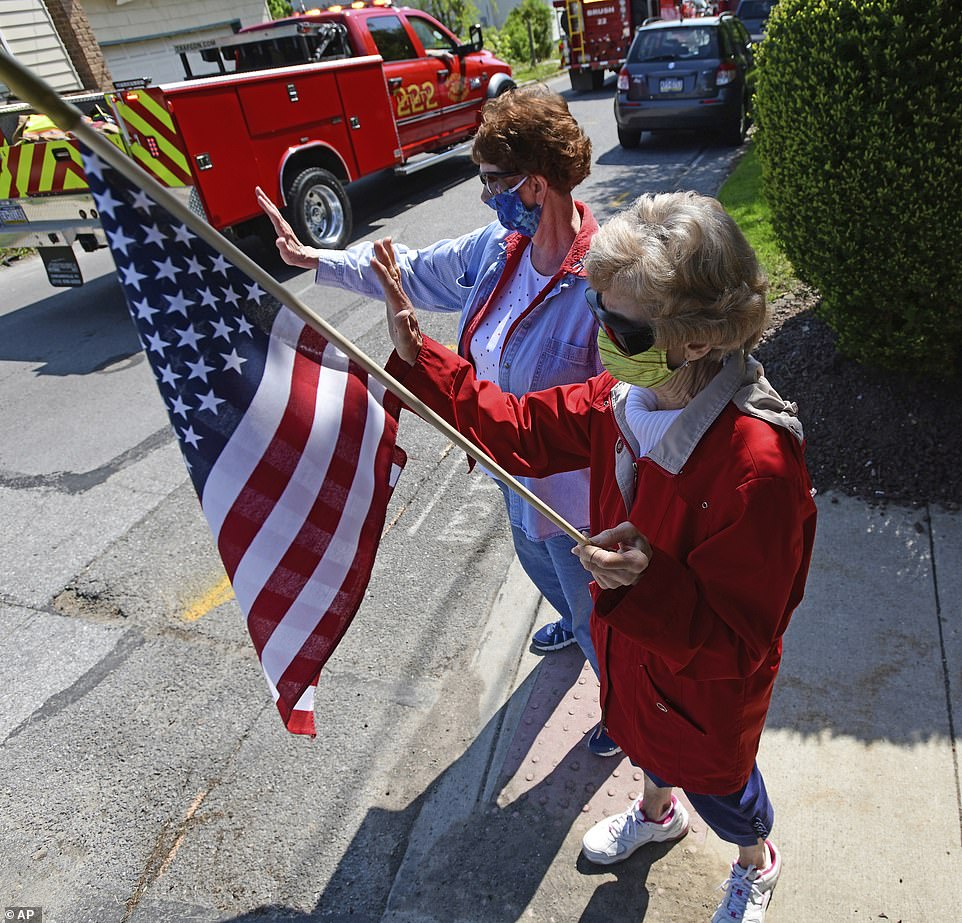 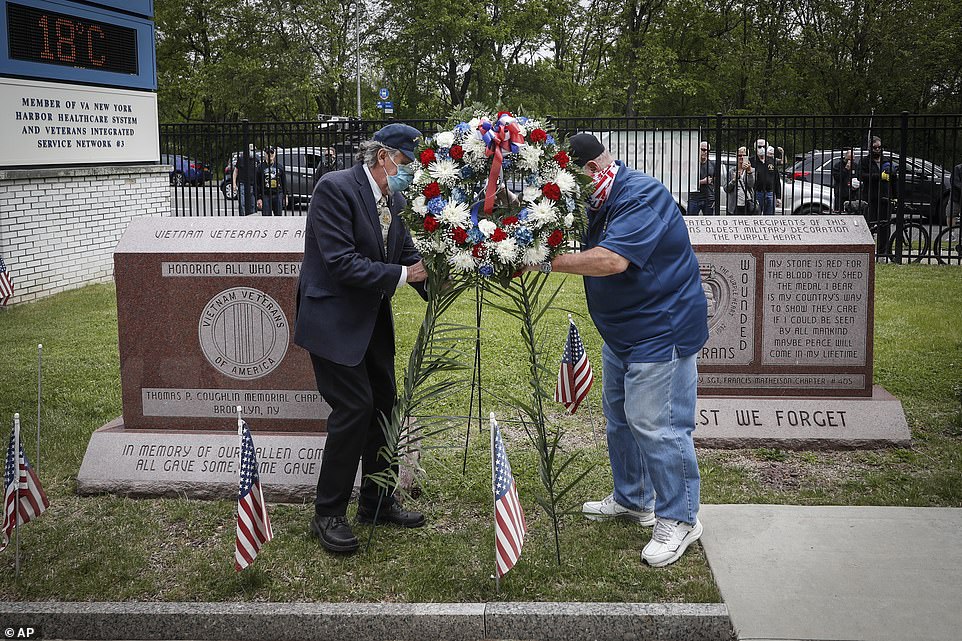 A motorcade of veterans stops outside the VA Medical Center as wreaths are lain beside memorial stones on the premises in Brooklyn, New York on Monday 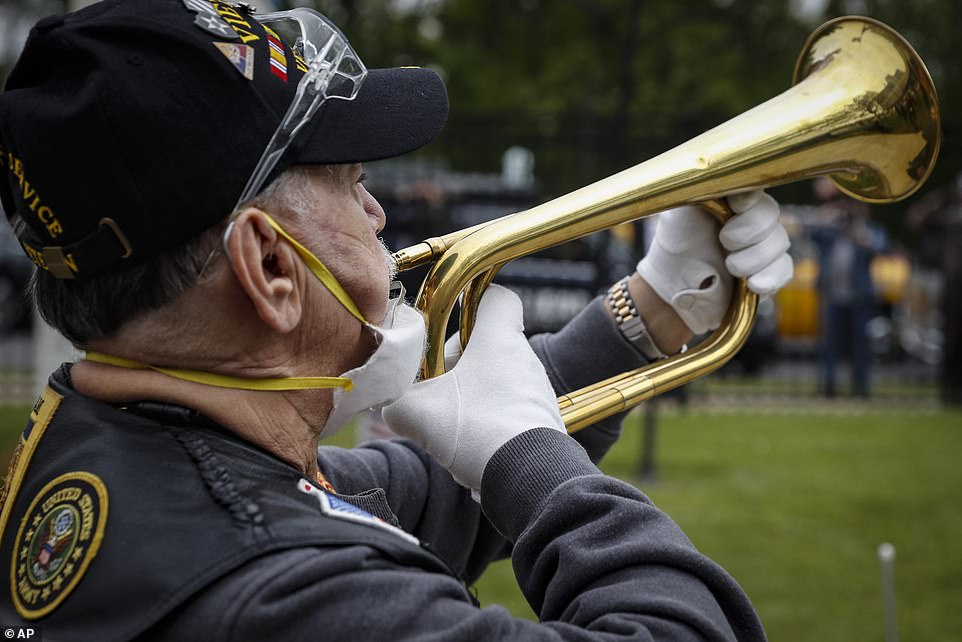 A bugler plays Taps as a motorcade of veterans stops outside the VA Medical Center for a wreath laying ceremony beside memorial stones on the premises in Brooklyn, New York on Monday 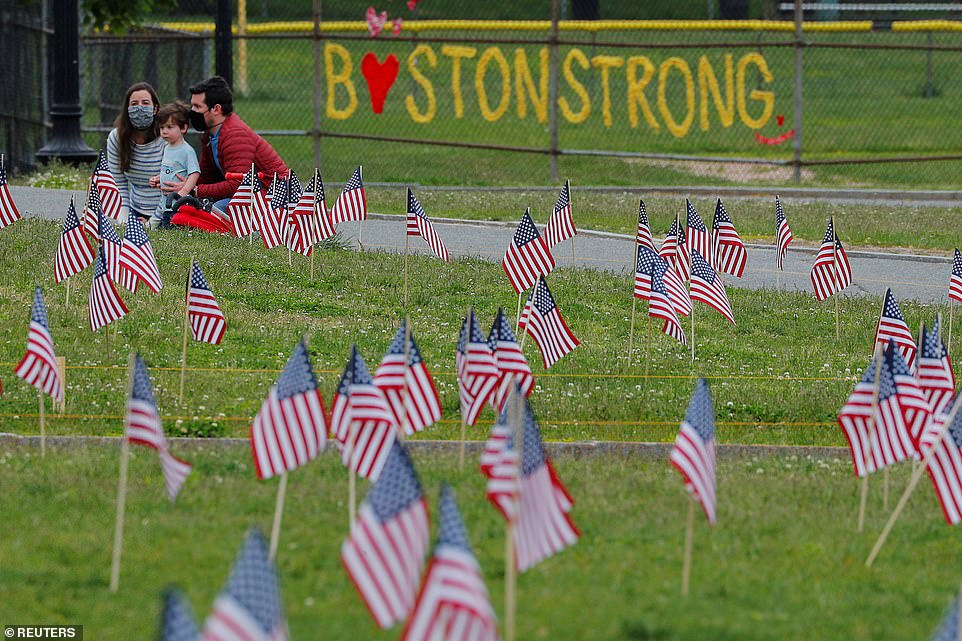 A family looks at the U.S. Flags planted six feet apart on Boston Common for Memorial Day amid the pandemic on Monday 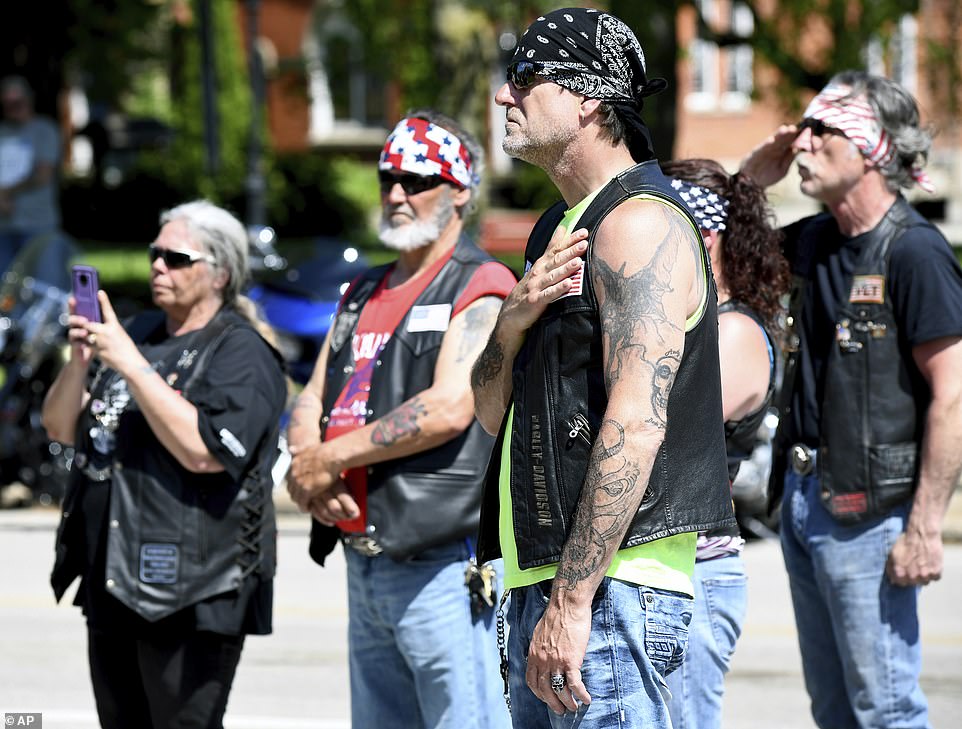 Members of Guardians USA Vets and the American Legion Riders participate in a Memorial Day ceremony at the Ashtabula War Memorial in Ashtabula, Ohio

In Southern California 18 World War II-era planes were slated to take to the skies in an hourlong aerial tribute called Operation SoCal Strong, flying over cemeteries and hospitals starting at noon.

Veterans from World War II and the Korea and Vietnam wars were invited to join as special guests for the flight that went through Riverside County, Orange and Los Angeles counties and back to Chino.

At Arlington National Cemetery the Army’s elite Caisson platoon has had its traditional funeral services halted since mid-March. In the traditional ceremonies horse-drawn wagons carry the caskets out to their graves and have been used to honor the lives of slain soldiers, elderly veterans and US presidents.

At the Tomb of Unknown Soldier, soldiers are known for their razor sharp patrol walks in front of the memorial. While visitors are not allowed to visit the tomb due to the virus, the tradition of having 24-hour guards around the tomb still persists today, regardless of weather, war, or in this case, a pandemic.

‘They had goals and they had ambitions and they weren’t able to fulfill that,’ Sgt. First Class Chelsea Porterfield, who is the Sergeant of The Guard said. ‘To maintain and make sure that we can provide the living symbol, if you will, for America and everyone to see what we are doing is the best way to pay tribute to all of the unknowns.’ 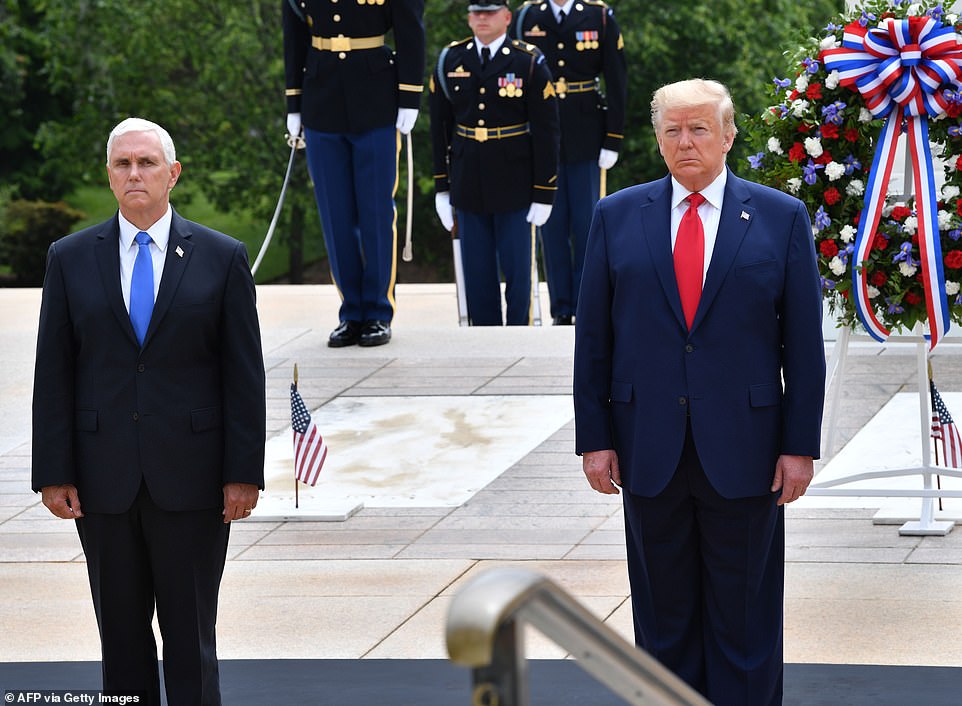 President Donald Trump participated in a ceremony honoring the nation’s war dead at Arlington Cemetery Monday. Pictured not wearing a mask alongside Vice President Mike Pence at a Wreath Laying Ceremony at the Tomb of the Unknown Soldier 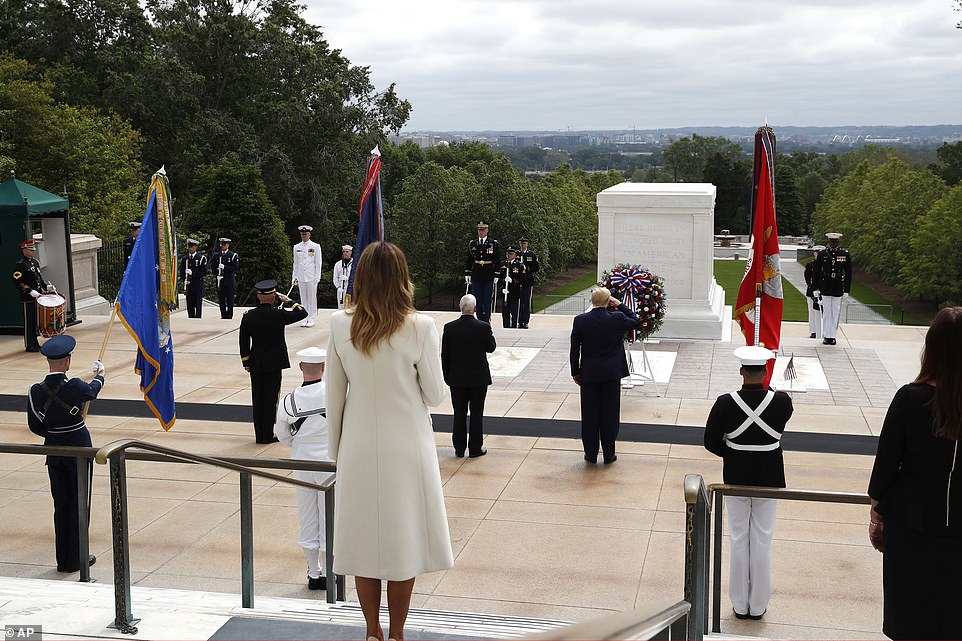 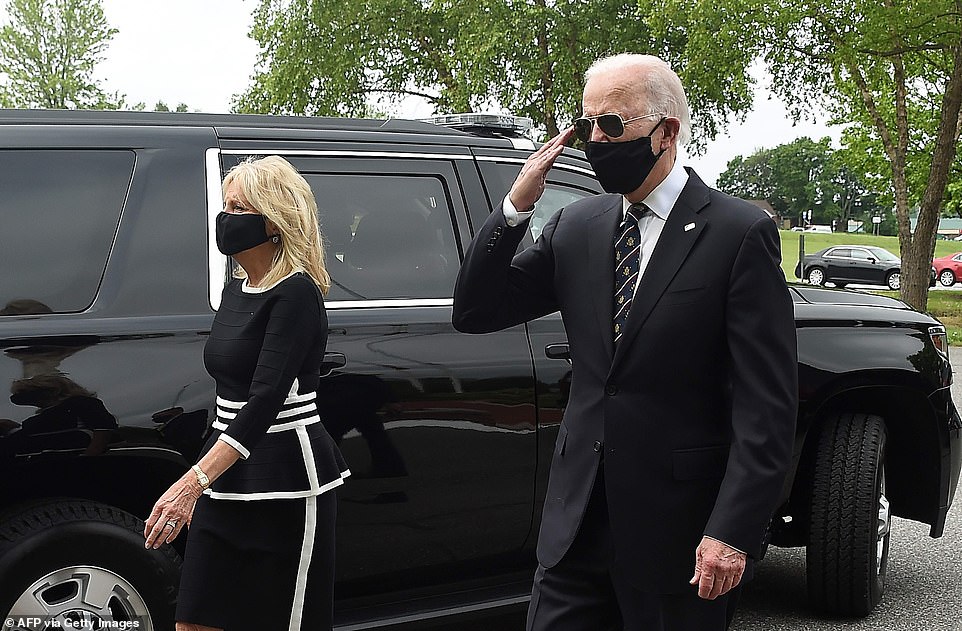 President Donald Trump participated in a ceremony honoring the nation’s war dead at Arlington Cemetery Monday in a remembrance that carried on its long traditions despite changes for the pandemic – then flew to Baltimore where he said the nation would ‘vanquish’ the coronavirus at the history Fort McHenry.

Trump traveled by motorcade across the Potomac River for the ceremony at the Tomb of the Unknowns at Arlington after wishing the nation a ‘HAPPY MEMORIAL DAY’ on Twitter.

The president stood hands-clasped in front of the wreath, which bore red, white, and blue flowers. He reached out and touched it, then gave a salute.

Democratic presidential candidate and former US Vice President Joe Biden stopped at the Delaware Memorial Bridge Veteran’s Memorial Park in Newcastle, Delaware on Monday where they paid tribute to lost servicemen and women. 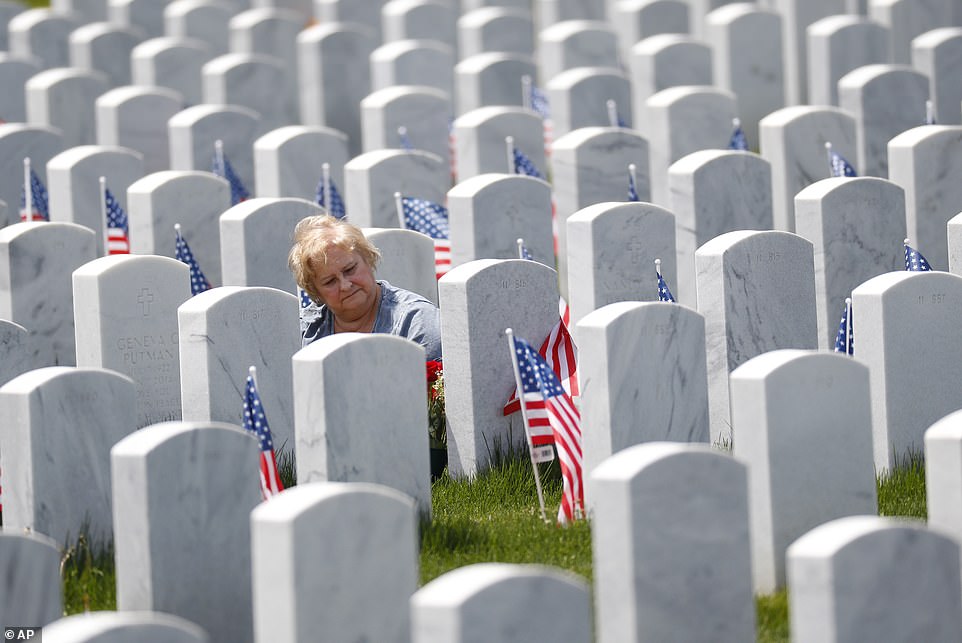 Rosemary Kennedy visits the gravesite of her husband Dennis on Memorial Day at the Great Lakes National Cemetery in Holly, Michigan 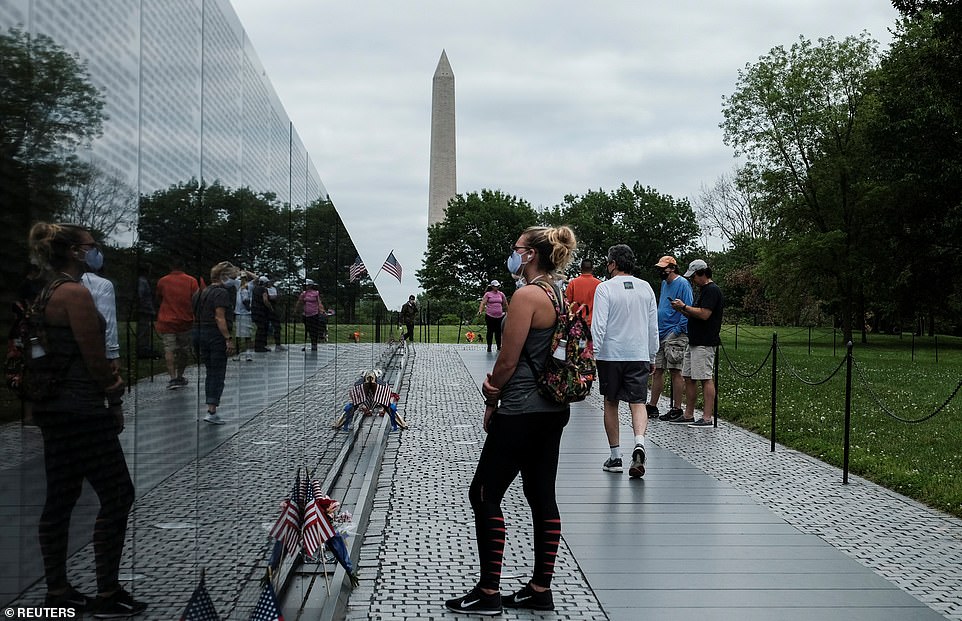 Members of the public and veterans visit the Vietnam Veterans Memorial in Washington D.C. on Monday 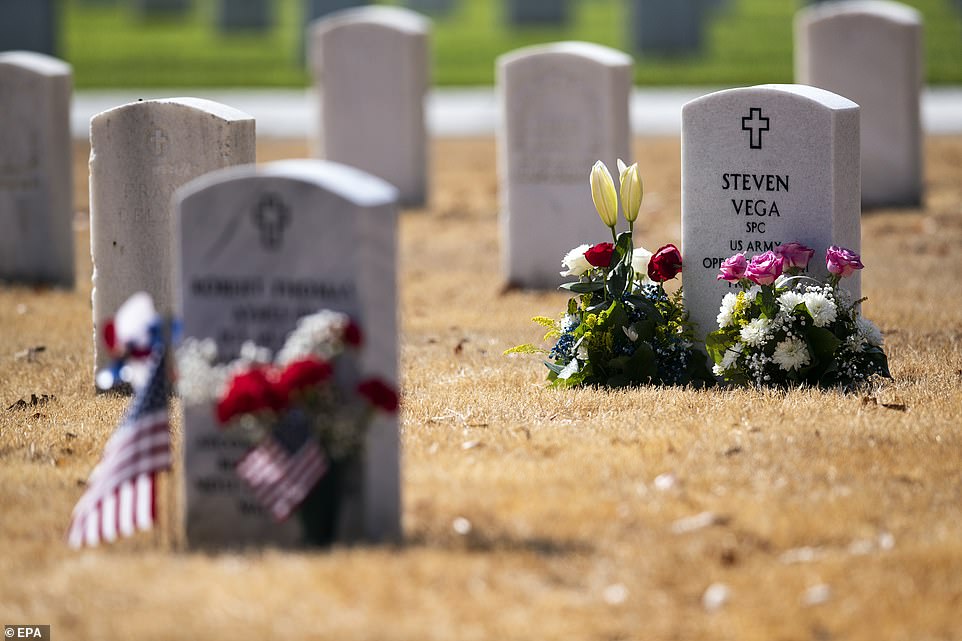 Flowers are displayed in front of the graves of US soldiers on Memorial Day in the Los Angeles National Cemetery in Los Angeles, California 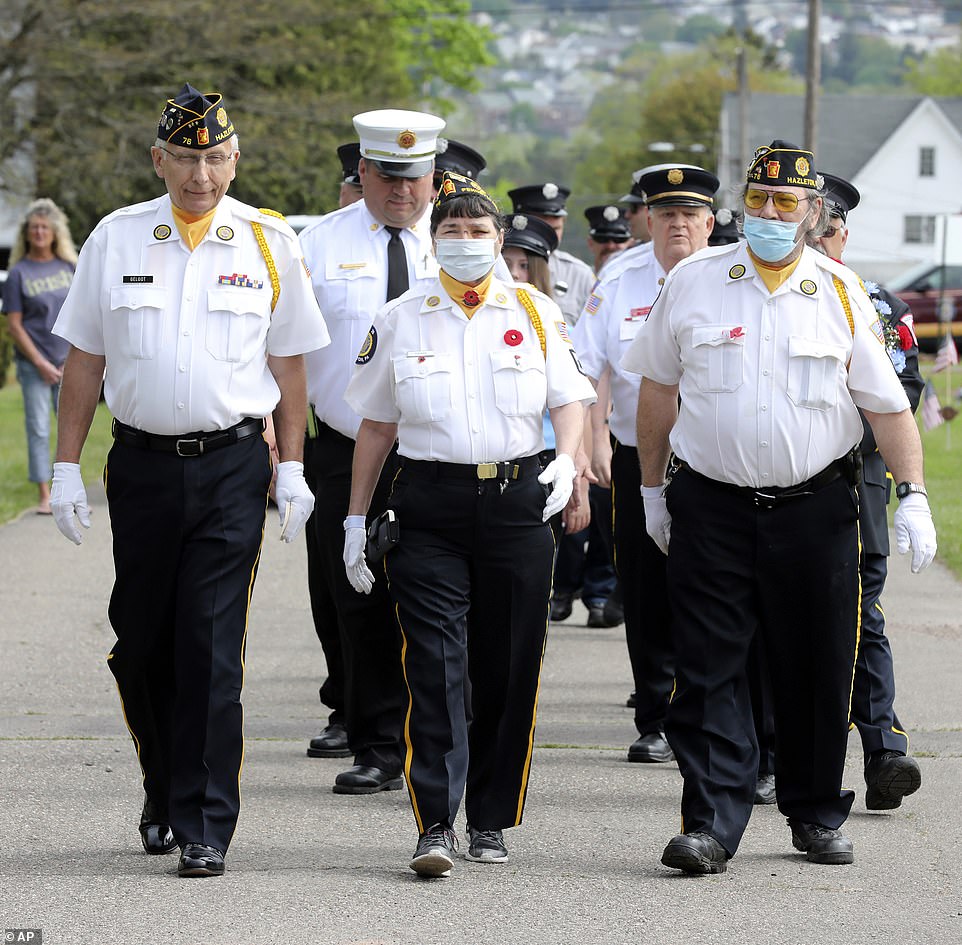 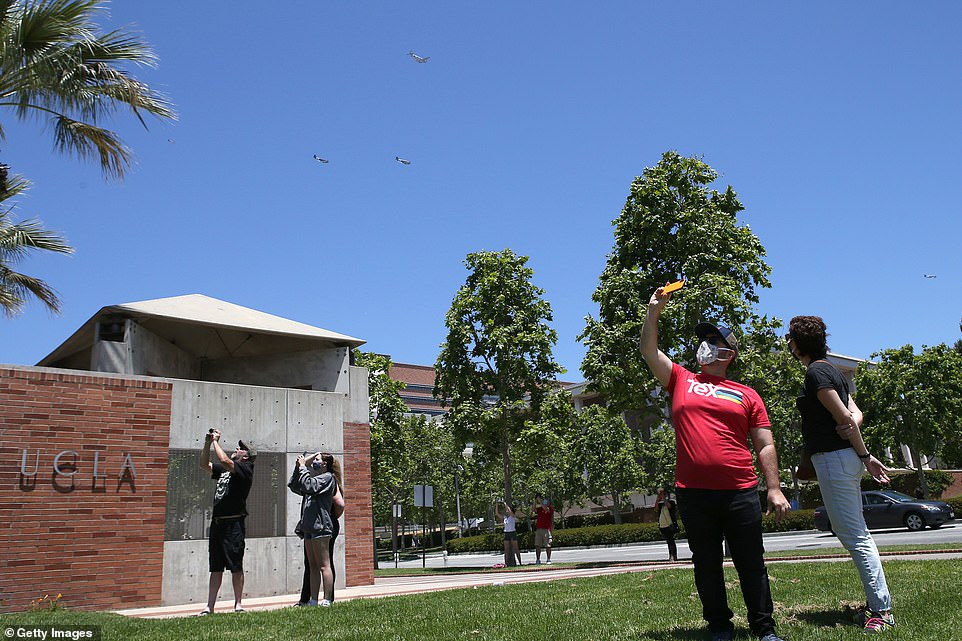