Billionaire Bill Gates says the majority of coronavirus tests being administered in the United States are ‘completely garbage’.

The philanthropist and former Microsoft founder said most of the diagnostic testing in the US was a waste of time because the tests take too long to provide results.

In a lengthy interview with Wired, Gates said it was ‘just stupidity’ that Americans weren’t getting their results back quickly enough.

‘The majority of all US tests are completely garbage, wasted,’ Gates said.

His frustration appeared to stem from the delays in getting results rather than the quality or number of tests.

Current delays in testing mean some people are waiting weeks to learn if they have tested positive or negative for COVID-19.

Gates suggested that the companies creating the tests should be reimbursed based on how long it takes for results to be returned.

‘If you don’t care how late the date is and you reimburse at the same level, of course they’re going to take every customer,’ he said of the companies. ‘Because they are making ridiculous money, and it’s mostly rich people that are getting access to that.

‘You have to have the reimbursement system pay a little bit extra for 24 hours, pay the normal fee for 48 hours, and pay nothing (if it isn’t done by then). And they will fix it overnight.’

He went on to say that it couldn’t change because the federal government sets the reimbursement system and, so far, calls to change it had been ignored.

‘When we tell them to change it they say, “As far as we can tell, we’re just doing a great job, it’s amazing!” Here we are, this is August,’ he said.

‘We are the only country in the world where we waste the most money on tests. Fix the reimbursement.’

An at-home test project backed, in part, by the Bill and Melinda Gates Foundation was put on hold by the FDA in June.

The Seattle Coronavirus Assessment Network (SCAN) had been offering at-home testing kits to residents in the region but was ordered to discontinue indefinitely until it got additional FDA-approval.

SCAN was sharing test results with patients but had only been approved by the FDA for surveillance testing, which does not allow researchers to return test results to patients or doctors. 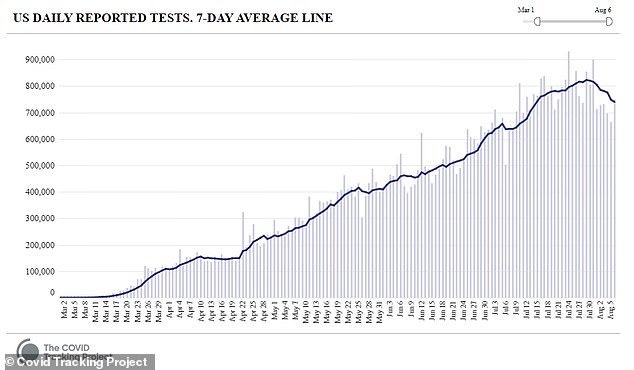 The US is currently carrying out, on average, about 739,000 tests each day, according to data compiled by the Covid Tracking Project 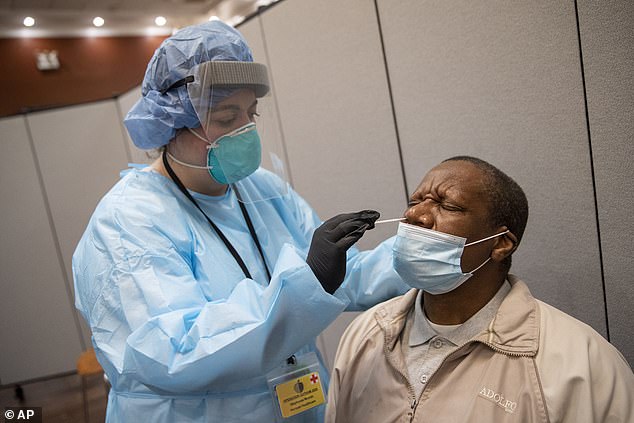 Gates claimed those tests got quicker results and were less intrusive because swabs didn’t have to reach to the back of a person’s nose.

‘We showed that the quality of the results can be equivalent if you just put a self-test in the tip of your nose with a cotton swab. The FDA made us jump through some hoops to prove that you didn’t need to refrigerate the result, that it could go back in a dry plastic bag, and so on,’ he said.

‘So the delay there was just normal double checking, maybe overly careful but not based on some political angle. Because of what we have done at FDA, you can buy these cheaper swabs that are available by the billions.

‘So anybody who’s using the deep turbinate now is just out of date. It’s a mistake, because it slows things down.’

The US is currently carrying out, on average, about 739,000 tests each day, according to data compiled by the Covid Tracking Project.

There have been nearly 4.9 million positive tests recorded across the country and more than 160,000 Americans have died from COVID-19.

President Trump has repeatedly boasted of the country’s success when it comes to testing.

In an interview with Axios that aired on Monday, Trump said the US should get credit for increased testing.

It comes as deaths in the US exceeded the grim 160,000 mark on Friday, which is nearly a quarter of the global COVID-19 death toll. The number of positive cases across the US is now at nearly 4.9 million.

Coronavirus deaths are still rising in 23 states, while cases are increasing in 20 states, according to a Reuters analysis comparing data from the past two weeks to the previous two. 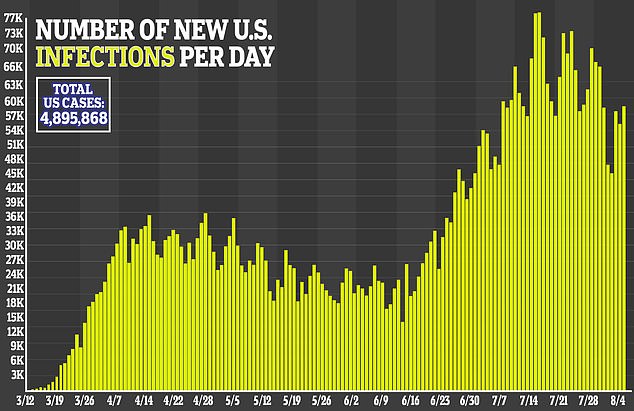 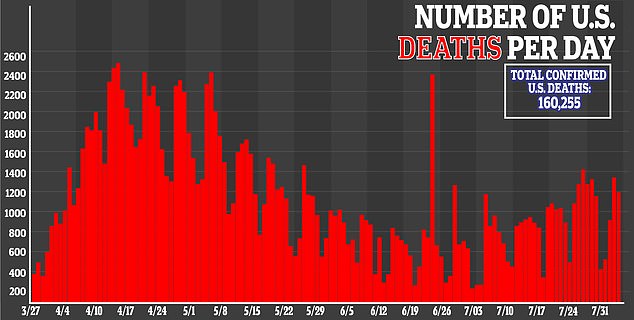 Many of the new deaths have come from the hotspot states of California, Florida and Texas, which are also the top three states for total cases.

While infections appear to be declining in those states, new outbreaks are emerging coast-to-coast.

White House coronavirus task force coordinator, Dr Deborah Birx, warned this week that the cities of Boston, Chicago, Detroit and Washington could face outbreaks due to an uptick in the percentage of coronavirus tests coming back positive.

Following her warning, fellow task force member Dr Anthony Fauci said on Thursday: ‘This is a predictor of trouble ahead.’

Fauci was asked on CNN about Birx’s comments identifying new areas of concern in major cities, even as authorities see encouraging signs across the South.

Even in cities and states where most people are doing things right, Fauci said, a segment of people not wearing masks or following social distancing remains vulnerable to infection and can keep the virus smoldering in US communities.

‘Unless everybody pulls together, and gets the level way down over baseline, we’re going to continue to see these kind of increases that Dr Birx was talking about in several of those cities,’ Fauci said.

Public health experts have in recent days sent regular warnings to cities and states not to relax anti-coronavirus measures too much before the virus is under sufficient control.

President Donald Trump, in contrast, has played down the staying power of the virus, saying on Wednesday ‘it will go away like things go away’ as he urged US schools to reopen on time for face-to-face lessons.