Coronavirus US: Buddy, the first dog to test positive, has died

The first dog to be diagnosed with Covid-19 in the US has died.

Buddy the German Shepherd was first confirmed to be infected with the coronavirus in May and sadly died on July 11.

It is thought he caught the virus from his owner Robert Mahoney who lives in Staten Island, New York.

The canine began showing symptoms in April, when his breathing became laboured and his nose was filled with thick mucus.

Prior to Buddy’s death, he received a second coronavirus test which was confirmed to be negative, however his worsening health continued to decline.

Veterinarians treating Buddy struggled to identify the cause of his health woes and it was not until the day of his death that it was discovered he likely also had lymphoma.

He was cremated and did not undergo a necropsy, so it remains a mystery how big a role the coronavirus had in his death.

Recently, the first dog in the world to catch coronavirus died after it was declared disease-free and returned home to its owner in Hong Kong.

Pictured, Buddy with his younger brother, Duke. It is thought both canines caught the virus from his owner Robert Mahoney who lives in Staten Island, New York. However, only Buddy suffered with symptoms. Duke had no symptoms, tested negative but had antibodies

National Geographic had independent veterinarian experts go through Buddy’s medical records to see if there was anything that could be garnered from them.

Pets infected with the coronavirus are rare and it is unknown how it affects animals and how at-risk they are.

Vets say it is possible that the undiagnosed cancer made Buddy more susceptible to the virus and could have led to his death.

In humans, pre-existing health concerns are known to significantly increase the risk of developing severe symptoms.

Buddy’s younger brother, Duke, is believed to have been infected with the virus.

Duke tested negative in May and had not shown symptoms but was found to have antibodies against the pathogen, indicating he had previously been infected.

On June 2, a vague press release talks about Buddy’s diagnosis without mentioning his name, only stating he is the first dog in the US to test positive for COVID-19.

The U.S. Department of Agriculture (USDA) only revealed his general location, breed, his likely source of transmission and his status, which was ‘likely to recover’.

According to the United States Department of Agriculture, only 11 other dogs outside of the Mahoney household have had COVID-19 in the country.

‘You tell people that your dog was positive, and they look at you [as if you have] ten heads,’ Allison Mahoney told Nat Geo.

‘[Buddy] was the love of our lives….He brought joy to everybody. I can’t wrap my head around it.’

The Mahoneys say the veterinarians and government agencies were slow to respond to the possibility of Buddy having coronavirus and believe there should have been more investigation into if the virus played a role in his death.

Mr Mahoney tested positive for the virus around Easter and his companion fell ill shortly after. 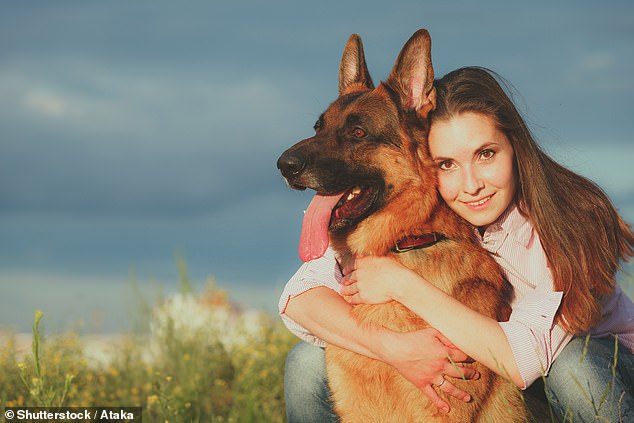 According to the United States Department of Agriculture, only 11 other dogs outside of the Mahoney household have had COVID-19 in the country. Ten cats, four tigers and three lions have also been diagnosed (stock image)

Officials in believe the cat — which wasn’t identified but lived in England — caught the coronavirus from its owners and ‘not the other way round’.

Experts have today warned Britons with the virus to avoid cuddling their pets or keep them indoors to cut the risk of spreading germs.

However, due to his owner being symptomatic and infected, getting the dog in to see a vet was difficult.

Several veterinary practices dismissed the possibility that Buddy had the coronavirus as reported cases of infected dogs at this point were very rare and only from abroad.

Buddy did not receive a test until May 15, more than a month after his first symptoms.

He was confirmed positive and the concerned owners took their poorly dog, and his asymptomatic brother, in to the vets.

There is emerging evidence that humans can pass the virus on to their pets, but it is unknown if animals can infect humans, so the vets took no chances.

Robert Cohen, veterinarian at Bay Street who treated Buddy, said: ‘For us it was a shock factor for a moment there…how do we protect our staff. We were well-PPE’d.’

Tests on May 20 found both dogs to be negative, but Buddy’s health rapidly continued to deteriorate.

Mr Cohen said he had several conversations with vet experts at both the New York City Health Department and the USDA regarding Buddy’s case.

He said that despite some of the world’s leading minds on veterinary medicine looking at the facts, there was no knowledge of how to treat him.

‘We had zero knowledge or experience with the scientific basis of COVID in dogs,’ he says.

Buddy worsened and was throwing up blood on July 11, when the vets and the Mahoney family decided to euthanize Buddy.

For more on this story, visit natgeo.com.