China committed an ‘act of war’ by covering up the scale of its early coronavirus outbreak for six weeks, a leading economist has claimed.

Danielle DiMartino Booth, an author and chief executive, said Beijing officials were aware of the deadly disease spreading in Wuhan last November and allowed it to snowball into a global pandemic.

She said Chinese officials had countless lives on their hands and should be hauled before an international court as their ‘under-reporting’ did not afford the rest of the world time to prepare for an onslaught.

The economist points to a ‘pandemic clause’ in the January trade deal between Washington and Beijing, which she believes is evidence the Communist regime knew the extent of their crisis while publicly downplaying it.

DiMartino Booth said: ‘The World Health Organisation should be held accountable for not holding China accountable to providing good valid data so the rest of the world could prepare for fewer people to die.

‘And that’s what you’re talking about. To me these are equivalent to acts of war.’

China committed an ‘act of war’ by covering up the scale of its early coronavirus outbreak for six weeks, a leading economist has claimed (President Xi Jinping pictured in March at a hospital in Wuhan) 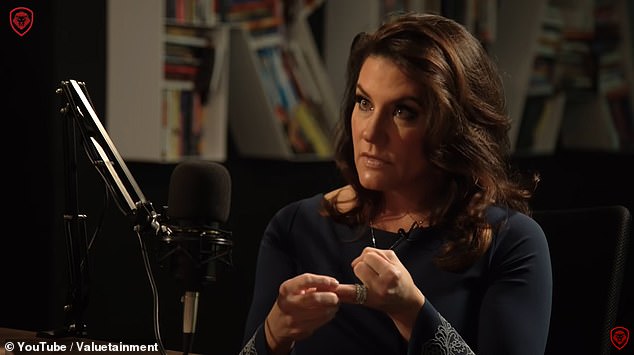 Danielle DiMartino Booth, an author and chief executive, said Beijing officials were aware of the deadly disease spreading in Wuhan last November and allowed it to snowball into a global pandemic

Her blistering attack, made on the Valuetainment YouTube show, came as Wuhan, the epicenter of the pandemic, revised the city’s official death toll to add nearly 1,300 fatalities.

She told host Patrick Bet-David that reports of a virus in Wuhan emerged in November, and that six weeks later on January 15, Washington and Beijing signed a trade deal in which she claims China preempted the pandemic.

In an agreement which ended the bitter trade war between the world’s two economic powerhouses, Xi Jinping would buy $200million of American goods and Donald Trump would ease tariffs on Chinese exports.

But DiMartino Booth said that buried in this deal was ‘an out-clause, a very clever out-clause that the Chinese made sure was in there.’

She continued: ‘That said if there was any act of God, a pandemic, then they didn’t have to make good on what they’d committed to buy from the United States. 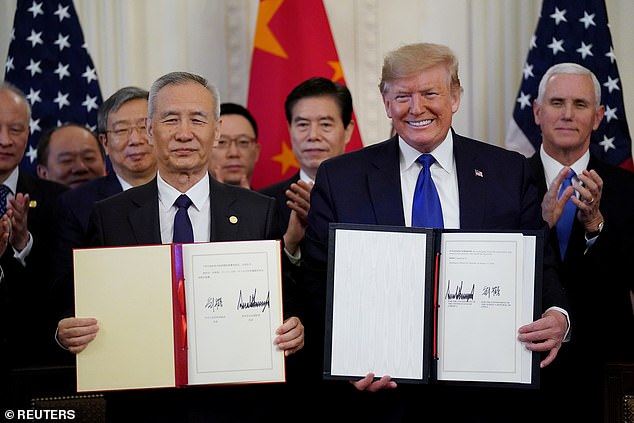 ‘So, did the Chinese know damn well that this thing was running around the world for six weeks before they shut down Wuhan? Yes they did. Is that criminal? Yes it is. Does it deserve to go in front of a world tribunal? Yes it does.’

The clause DiMartino is understood to have referred to is Article 7.6, which stipulates that the parties shall ‘consult with each other’ in the event of a ‘natural disaster or other unforeseeable event’ outside of their control.

China first officially started investigating a pneumonia-type disease in Wuhan in December, but last month the South China Morning Post unearthed a report which suggested the government were aware of an outbreak as early as November.

Questions have long swirled around the accuracy of China’s case reporting, with Wuhan in particular going several days in January without reporting new cases or deaths. 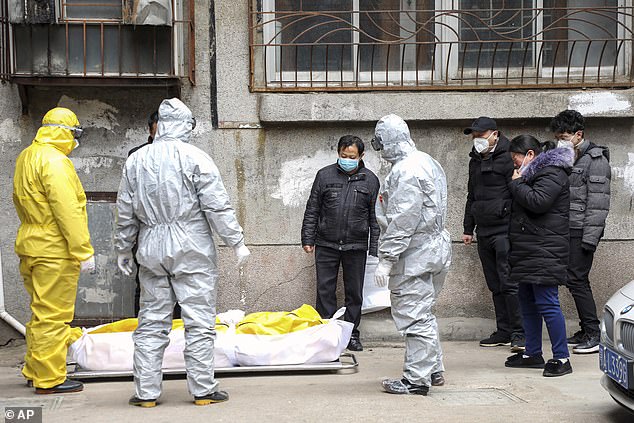 Arkansas Senator Tom Cotton has claimed that China ‘deliberately’ allowed the rest of the world to become infected with the novel coronavirus.

He made the comments during an interview on Fox’s Outnumbered Overtime after it emerged that US intelligence officials are investigating whether the virus could have leaked from a laboratory in Wuhan.

Cotton said that even if there was a lack of ‘conclusive evidence’ on where the virus originated, the cover up in the weeks following the outbreak allowed the disease to spread beyond China to wreak havoc on the rest of the world.

That has led to accusations that Chinese officials were seeking to minimize the impact of the outbreak and could have brought it under control sooner.

A group of eight medical workers, including a doctor who later died from the virus, were even reprimanded and threatened by police after they tried to alert others about the disease over social media.

Chinese officials have denied covering up cases, saying their reports were accurate and timely.

However, the WHO has come under criticism for defending China’s handling of the outbreak.

President Trump has now suspended funding to WHO over what he alleges is its pro-China bias.

Trump’s blaming of China came after he initially showered praise on Chinese President Xi Jinping for the country’s response, while largely dismissing the risk it posed to the US

At the start of the outbreak, China proceeded cautiously and largely in secret, emphasizing political stability.

Experts estimate more than 3,000 people were infected before China’s government told the public about the gravity of the situation, which officials had concluded six days earlier.

The risk of sustained human-to-human transmission was also downplayed, even while infected people entered hospitals across the country and the first case outside China was found, in Thailand.

As Trump and other US officials and lawmakers started blaming China for the outbreak, Chinese officials sought to shift blame back to the US.

Foreign ministry spokesman Zhao Lijian tweeted in March: ‘It might be US army who brought the epidemic to Wuhan.’