A sweet salute: Florida police officers park their cars in a heart shape outside local hospital to thank all of the healthcare workers who are fighting COVID-19

Police officers in Florida have expressed their deep gratitude to all the healthcare workers who are fighting on the frontlines of the COVID-19 pandemic by parking their cars in a heart formation outside a local hospital and saluting staff as they went to work.

The Fort Myers Police Department arranged the heartwarming tribute last week, when 15 patrol cars were parked in a heart shape outside the Lee Memorial Hospital all day.

Several officers then stood inside the formation and held up a sign that read: ‘FMPD thanks you.’

Saying thanks: The Fort Myers Police Department in Florida paid tribute to staff at the local hospital by parking their cars in a heart formation outside for workers to see as they came and went 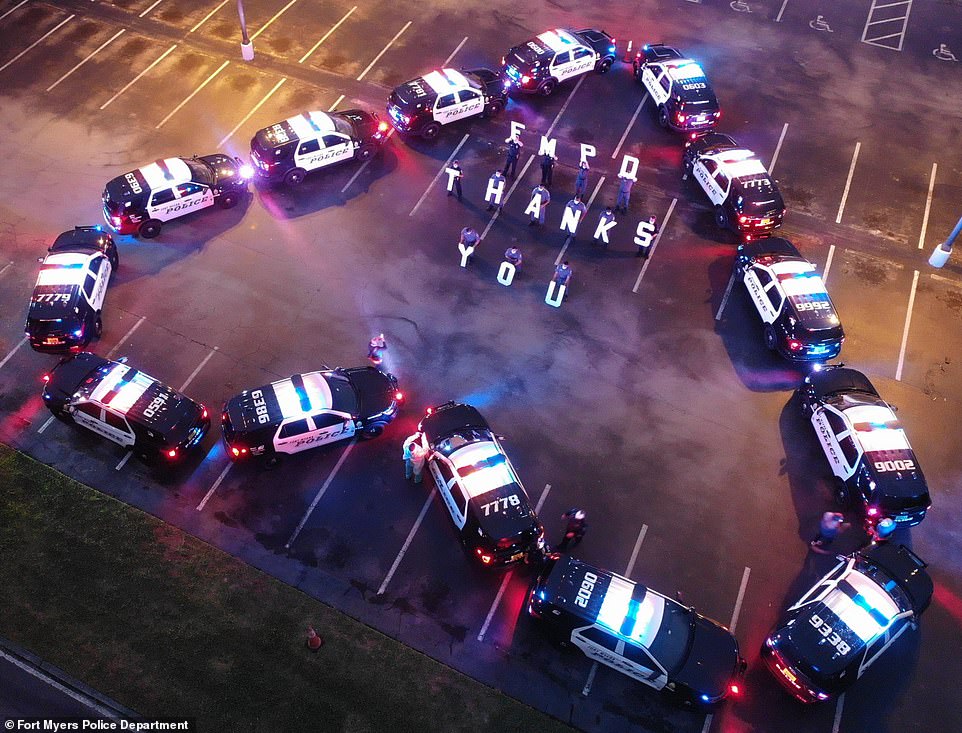 It’s lit! 15 patrol cars formed the heart, and several officers stood inside the sweet symbol and held up a sign that read, ‘FMPD thanks you’ 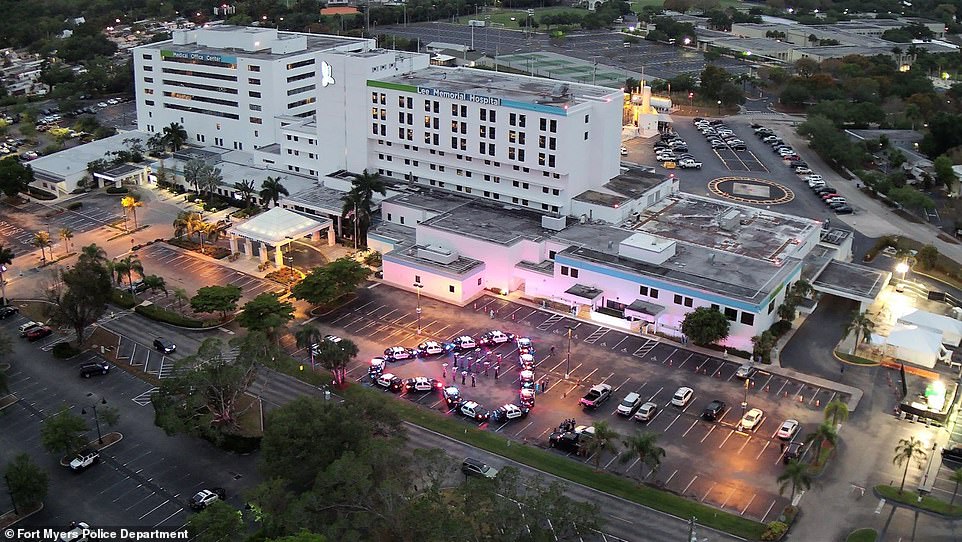 Shining bright: Officer Kristin Capuzzi, who came up with the idea, said that she and her colleagues wanted to come up with a ‘nice way to say thank you’ to local healthcare workers

The cars made several trips to the hospital throughout the day, with officers turning on their flashing blue-and-red lights when it began to grow dark to ensure that their tribute could be seen by all workers arriving at and leaving the hospital – as well as those working so hard behind its doors.

‘We wanted a nice way to say thank you to our healthcare professionals,’ Officer Kristin Capuzzi, who came up with the idea, told Good Morning America, explaining that Lee Memorial is her department’s ‘hometown hospital’ and they wanted all of the hardworking people inside it to feel that they have as much local support as possible.

Officer Capuzzi brainstormed ideas for the tribute with her fleet lieutenant, and they then called for volunteers from within the department who would get into formation at shift change times to try and surprise as many hospital workers as possible.

And their touching tribute certainly seemed to have the desired effect, with Officer Capuzzi revealing that several of the nurses teared up upon seeing the sweet salute.

‘Some of the nurses were getting in their cars teary-eyed and would come over to take pictures. It was really neat,’ she shared.

‘This was a personal experience that was a simple way to show our appreciation. It’s tough times and we all have to stick together.’ 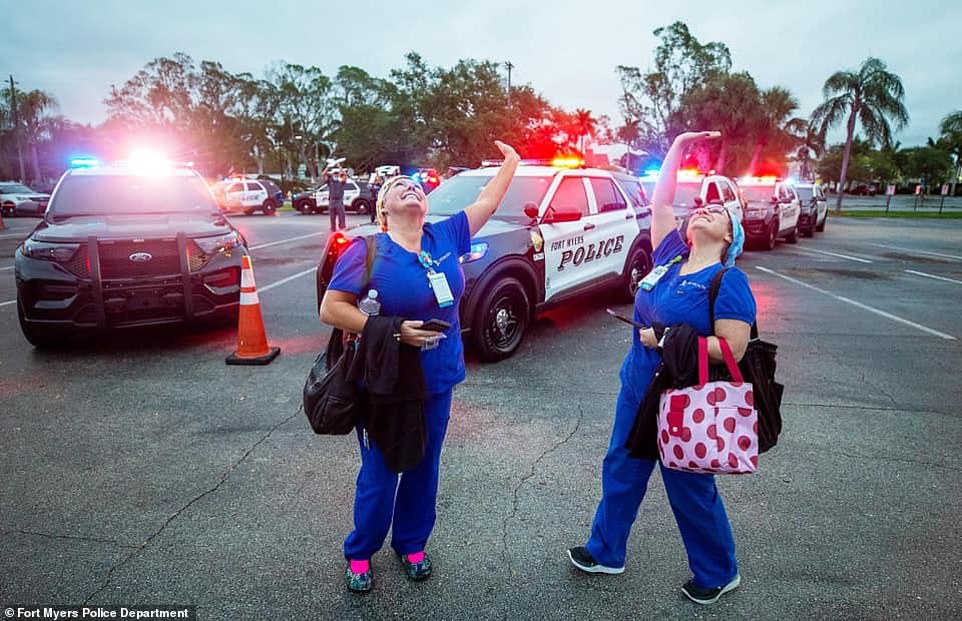 Touched: The police officer revealed that several nurses teared up when they saw the tribute 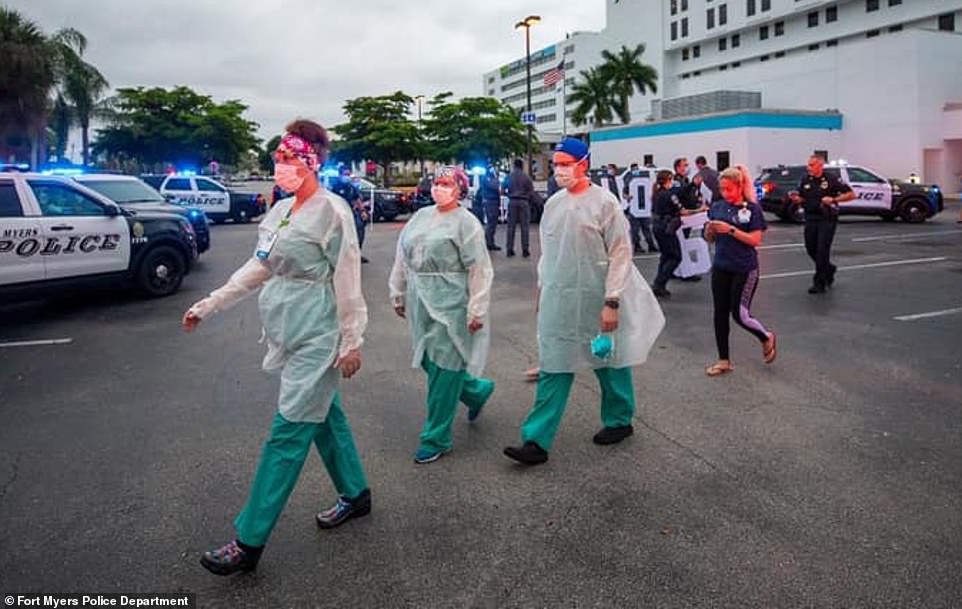 Best wishes: The cars were parked around shift change times, so that as many healthcare workers as possible could be surprised by the salute 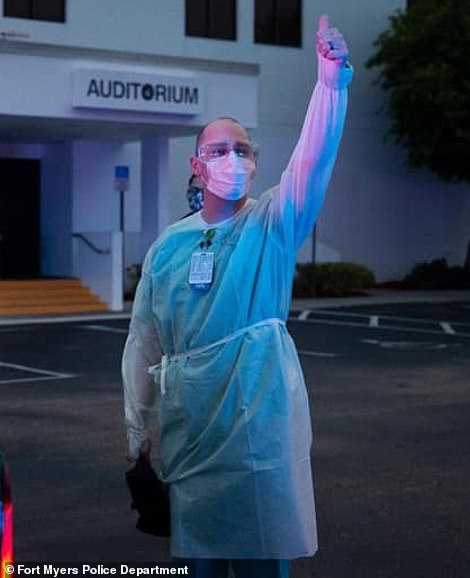 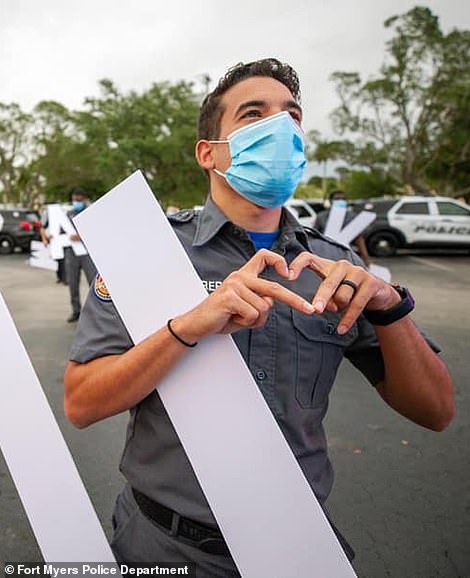 Heartfelt: The gesture not only brought joy to healthcare workers and police officers, but also to thousands of people on Facebook, where pictures of the tribute quickly went viral

The FMPD’s meaningful gesture didn’t just help to lift the spirits of staff at Lee Memorial Hospital, it also brought joy to thousands on Facebook, who also took the opportunity to praise all of the healthcare workers who are making such a difference during this difficult time.

‘I want to thank all of our LEO and First Responders also everyone on the frontlines,’ one person commented on the police department’s post about the tribute. ‘Thank you for all that you are doing in this great time of need. God Bless you all.’

Another person added: ‘Beautiful! Thank you healthcare workers and FMPD for your dedication.’

One Fort Myers local who had a hand in organizing the tribute expressed his thanks to the officers, describing it as an ‘honor’ to be involved in such a touching display of gratitude.

‘Wow!!! What an honor and privilege it was to have our family, FMPD pay such a moving tribute of respect and gratitude to our hero’s at LMH,’ Scott Wolf wrote.

‘To have those who put their lives on the line day in and day out to come out with this gesture was a moving experience. Huge shout out to Lieutenant Roger Valdivia for reaching out to me and organizing tonight’s event. To all of our brothers and sisters at FMPD, it’s an honor to serve our community side by side. Mutual respect and admiration.’