New coronavirus cases appear to be declining across the United States after infections fell five percent nationally last week and 30 states reported fewer cases than in the previous seven days.

The number of infections across the US has now fallen for the second straight week and an average of nearly 60,000 new cases are being reported each day.

The current seven-day average of daily cases is down from a peak of well over 70,000 in the second half of July when the virus was surging in Sunbelt states.

While cases appear to now be on a downward trajectory nationally, deaths have been increasing for a month and an average of 1,000 Americans are currently dying each day.

The US has now racked up more than 158,000 coronavirus deaths and more than 4.8 million infections.

The death rate is a lagging indicator and can continue to rise weeks after new infections drop. A coronavirus death, when it occurs, typically comes several weeks after a person is first infected.

The number of infections across the US has now fallen for the second straight week and an average of nearly 60,000 new cases are being reported each day 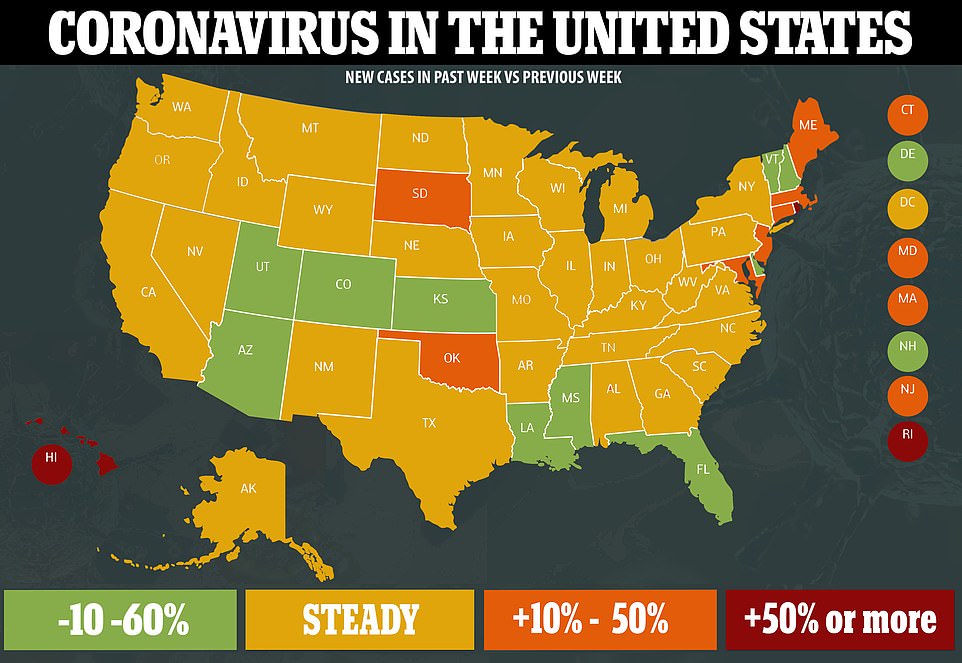 The number of new COVID-19 cases reported last week fell 5 percent from the previous week. California, Florida and Texas collectively accounted for nearly 180,000 of the new cases, though new infections were lower in all three states compared to the previous week

Last week, coronavirus cases fell five perfect compared to the previous seven days, according to a Reuters tally of state and county reports.

California, Florida and Texas collectively accounted for nearly 180,000 of the new cases in the week ending August 2.

New infections were lower in all three of those hotspot states compared to the previous week.

Meanwhile, a total of 22 states have reported increases in deaths for at least two straight weeks, including hotspots California, Texas and Florida.

Deaths in Arizona, another hotspot state, decreased last week for the first time since they started to surge in early July.

Even though deaths are now rising across the US, they are below the levels seen in April when an average of 2,000 people a day were dying from the virus – mostly in the original epicenter of New York.

Deaths surged in April in the weeks after coronavirus infections spiked mostly in the Northeast.

The number of fatalities are now increasing in Sunbelt states and across the Midwest after infections surged there throughout June and July. 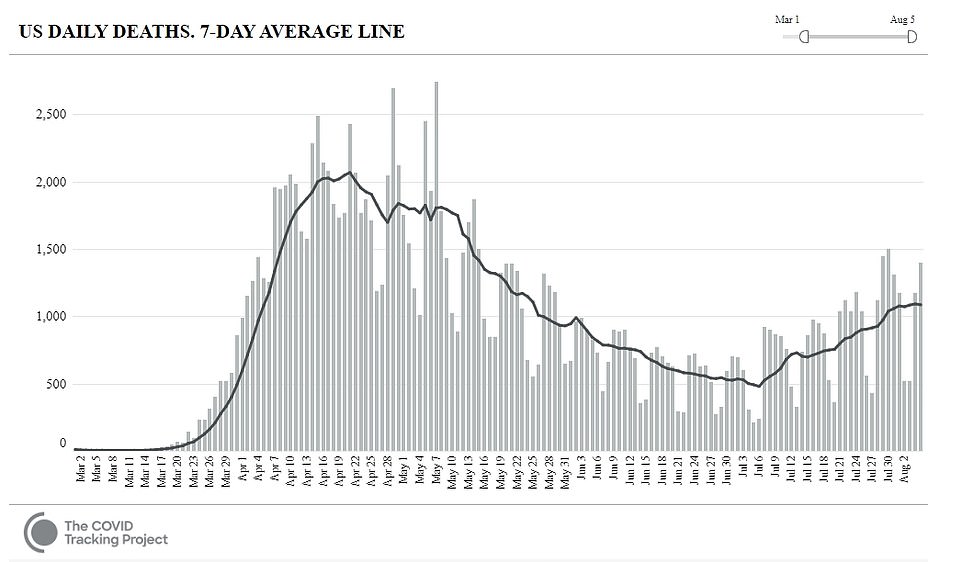 While cases appear to now be on a downward trajectory nationally, deaths have been increasing for a month and an average of 1,000 Americans are currently dying each day 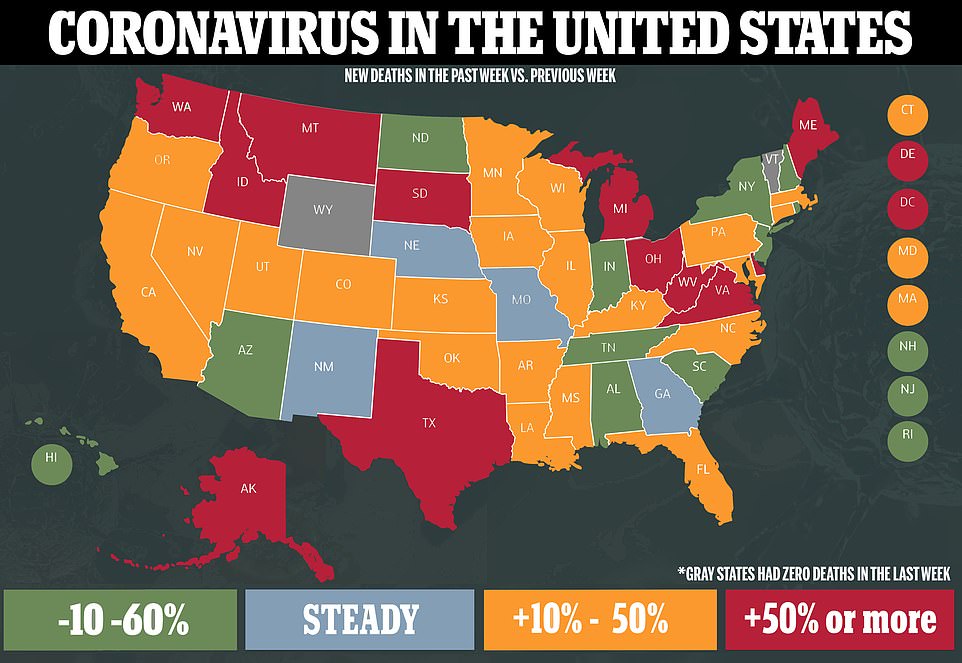 In a call with state and local officials that was obtained by the Center for Public Integrity, Birx said there were encouraging signs in southern states hit hard by the pandemic.

‘We are concerned that both Baltimore and Atlanta remain at a very high level,’ Birx said on the call.

‘Kansas City, Portland, Omaha, of course what we talked about in (California’s) Central Valley.

‘We are seeing a slow uptick in test positivity in cases in places like Chicago, Boston and Detroit and DC,’ she said, adding that the virus has entered a new phase.

‘This outbreak is different from the March, April outbreak in that it’s in both rural and urban areas.’

Earlier this week, Trump had criticized Birx for giving a sobering description of the state of the pandemic.

It comes as Dr Anthony Fauci said the ‘numbers don’t lie’ when it comes to coronavirus in the US as he acknowledged that the country has the worst COVID-19 outbreak in the world and some states, in a sense, were ‘on fire’.

His comments came during an interview on Wednesday with CNN’s Dr Sanjay Gupta at a virtual Harvard T.H. Chan School of Public Health forum.

When asked if the US had suffered the worst globally given the country represents a quarter of total COVID-19 infections but only holds about 5 percent of the world’s population, Fauci said: ‘Yeah, I mean it is. Quantitatively, if you look at it, it is.’

‘Every country has suffered. We, the United States, has suffered… as much or worse than anyone.

Deaths related to COVID-19 have now risen nationally for four straight weeks, while the number of infections have declined for the second week, according to an analysis of data 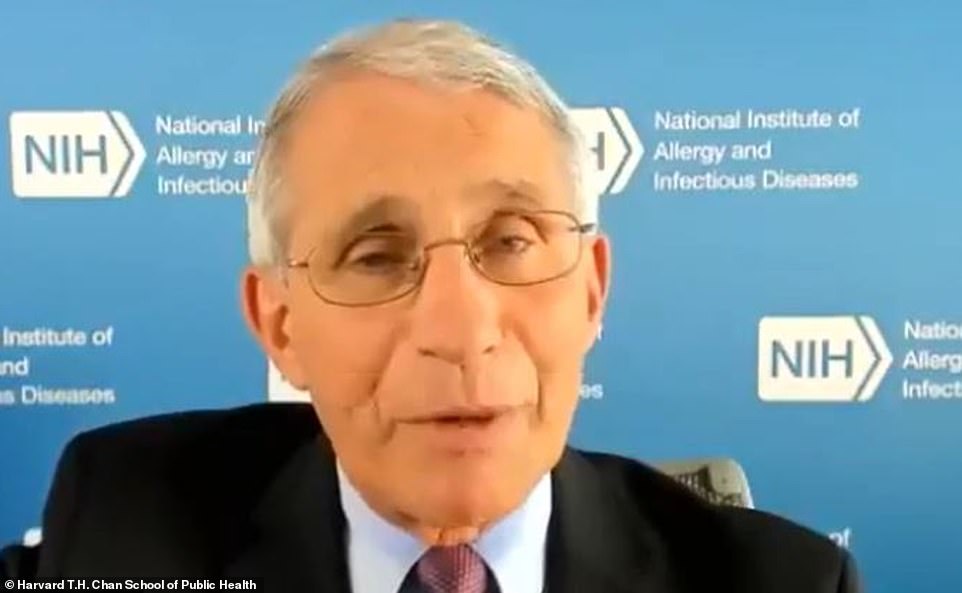 Anthony Fauci, who is a member of the White House’s coronavirus task force, said that the US has ‘quantitatively’ suffered from the COVID-19 pandemic as the country averages nearly 60,000 new cases and 1,000 deaths per day

Data from Wednesday shows that the US represents 22 percent of global COVID-19 deaths and more than 25 percent of worldwide infections.

Fauci’s tone contrasts with comments made by President Donald Trump on Monday when he declared in an interview with Axios on HBO that coronavirus was ‘under control’ in the US.

When confronted by the fact that an average of 1,000 Americans are dying each day from COVID-19, Trump said: ‘They are dying, that’s true. And you have – it is what it is.’

‘But that doesn’t mean we aren’t doing everything we can. It’s under control as much as you can control it. This is a horrible plague.’

In an interview with Reuters in which he was asked if he shared that sentiment, Fauci said some parts of the country were more under control than others.

Trump also said in that interview, which was filmed on July 28, that the country’s current death rate was ‘lower than the world’.

Citing a series of charts and graphs regarding death rates in comparison to cases, Trump said: ‘The United States is lowest in numerous categories. We’re lower than the world, than Europe.’

He went on to say: ‘Death is way down from where it was. Where it was is much higher than where it is right now.’

Fauci went on to say that he doesn’t believe the US would have to lockdown again like it did in April to stop the spread.

‘We can do much better without locking down,’ he said. 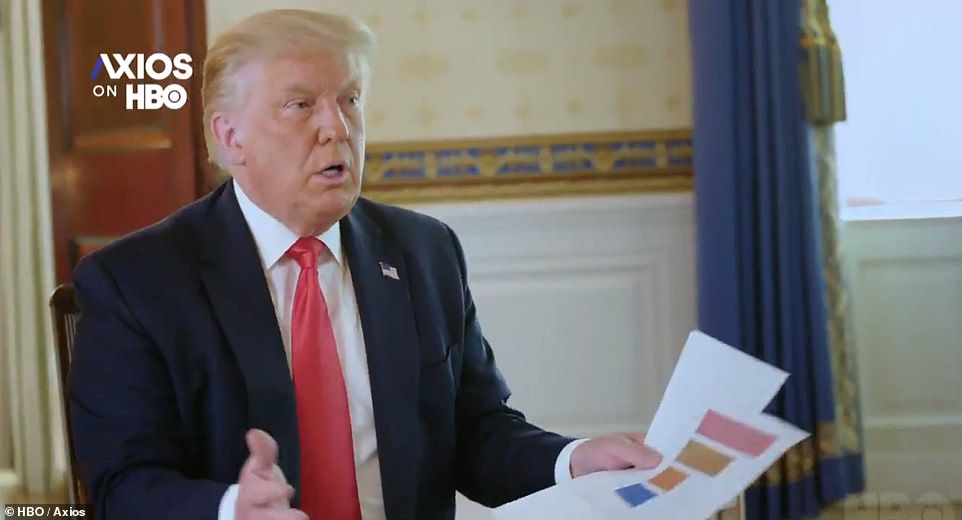 In an interview with Axios on HBO that was filmed last Tuesday but only aired Monday, Trump said the virus was well-controlled across the US despite the country averaging about 65,000 new cases and 1,000 deaths per day

He said Americans should wear masks, keep physically distanced, shut down bars, wash their hands and favor outdoor activities over indoor ones in order to help stop transmission of the virus.

In response to recently criticisms from Trump, Fauci said that doctors try to focus on the science rather than political distractions.

‘What we try to do, you know maybe some could do it better than others, is to focus like a laser on what we’re supposed to be doing: getting this epidemic under control,’ he said.

Fauci said differences in the seriousness with which people had taken the virus in the US had hampered the response to the pandemic in comparison to other countries.

‘We have somewhat of a disjointed approach to things,’ he said. ‘If we had a uniformity of it, and everybody rode together in the same boat, we probably would do much better.’

Fauci and other medical professionals have urged Americans to wear masks and maintain a social distance to prevent the spread of the virus. He lamented the fact that mask-wearing had become political earlier in the pandemic.

Trump declined to wear a mask in public for months and Vice President Mike Pence faced criticism for not wearing one when he visited the Mayo Clinic in April.

‘I’m very pleased now that we’re seeing the vice president consistently wearing a mask, the president tweeting that you should be wearing masks. That’s a good thing. That’s a step in the right direction.’

There have now been 710,110 deaths worldwide, according to John Hopkins