A controversial Catholic priest in San Francisco criticized his parishioners for putting ‘safety’ over ‘sanctity’, skipping Mass to ‘avoid the remote possibility of dying from Covid’ and claimed the news reports about the global virus as ‘largely unreal.’

Father Joseph Illo also claimed that the media had exaggerated the severity of the COVID-19 pandemic to upset President Trump’s chances at winning at the November election.

Father Illo, of the Stars of the Sea Parish, made the remarks on July 26 in a now-deleted post on the church’s online bulletin board.

It come after San Francisco city officials sent a cease-and-desist order to Stars of the Sea Parish after religious leaders, including Illo,  continued to hold several large indoor gatherings in violation of the city’s public health orders during the COVID-19 pandemic.

Father Joseph Illo (pictured), of the Star of the Sea Parish in San Francisco, California, wrote a now-deleted post that criticized parishioners for putting ‘safety’ over ‘sanctity’

‘The only reason to be a Catholic is to become a saint,’ wrote Illo, a priest of 30 years, according to SFist.

‘But we are more concerned about ‘safety’ than sanctity,’ he added, referring to the ongoing pandemic.

‘During the pandemic we have chosen safety above sacraments.  Fear has replaced faith.’

Illo continued to downplay the severity of the pandemic and urged his parishioners to attend mass – despite California having emerged as a new coronavirus hot spot with nearly 500,000 confirmed cases and 8,000 deaths.

Then, Illo began to push misinformation about the pandemic and made claims about hospitalization numbers without citing evidence.

‘COVID is real, but please know that the news reports about COVID are largely unreal,’ he wrote.

‘Actual hospitalization numbers easily obtainable on hospital websites will show a much less alarming picture. We cannot ignore the fact that the glaring discrepancy between media reports and hospital reports is taking place in an election year.’

Illo also noted that although he knows thousands of people, he only knows three who have tested positive so far, including a 94-year-old woman who ‘has no symptoms and feels fine. 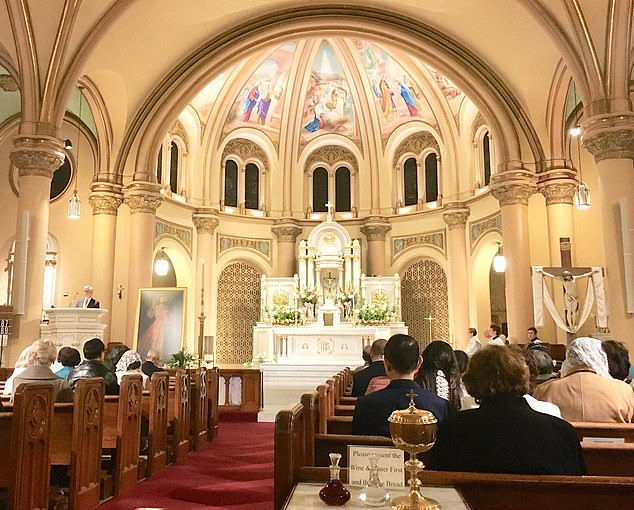 In the letter, Father Illo accused the media of exaggerating the infection numbers and hospitalizations related to COVID-19

According to Illo, what he perceives as inflated numbers are part of a larger agenda, or political ploy, by the media to see Trump out of the White House come November.

‘Note two facts: 1) Those who control the media have stated vitriolic opposition to our incumbent president,’ he wrote, SFGate reports.

‘2) A proven means of unseating an elected official is to induce fear among the incumbent’s constituents.’

Instead, Illo wrote that people should ‘see God’s peaceful order in the flowers and the trees’ and stop engaging with coronavirus media reports.

‘You can break your addiction to the internet and the news cycles,’ he wrote. 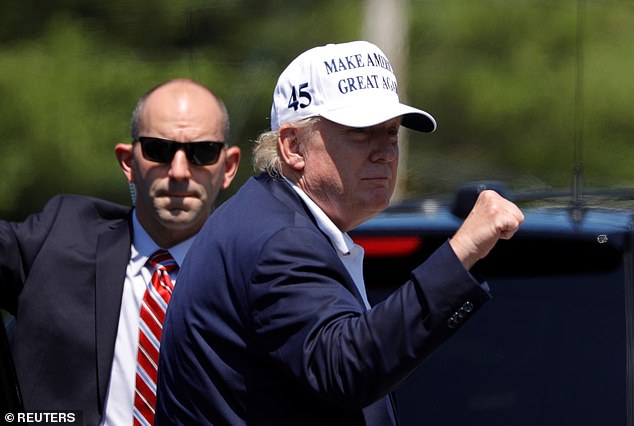 In May, he accused the ‘lamestream media’ of conspiring against him after two reporters challenged Trump about his handling of the coronavirus pandemic, which has been widely criticized for a myriad of reasons.

‘The Lamestream Media is truly out of control, Trump blasted on Twitter.

‘Look how they work (conspire!) together. They are the Enemy of the People, but don’t worry, we will WIN in November!’

Trump has also launched an aggressive campaign to reopen America’s economy, despite the significant number of case surges and what some have described as a lack of national leadership.

Just this month, Trump publicly donned a face mask for the first time and has continued to push the medically unproven coronavirus drug hydroxychloroquine.

But Illo’s letter is just the latest move in a larger back-and-forth between the church and San Francisco officials.

‘It is absolutely irresponsible for anyone to use their spirituality to spread potentially deadly misinformation,’ said Breed.

‘Whether you are a religious or political leader, we all have a responsibility to serve and protect the public at all times, especially during a pandemic that has killed 150,000 Americans.’ 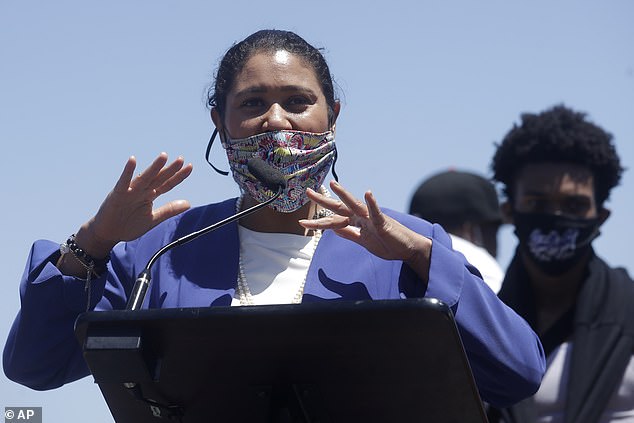 San Francisco Mayor London Breed (pictured): ‘It is absolutely irresponsible for anyone to use their spirituality to spread potentially deadly misinformation’

Under San Francisco’s new health order, religious services are only allowed to be held outside with a limit of 12 parishioners, unless the people come from the same household.

‘[It] doesn’t speak well of people who claim to be spiritual and religious,’ said Brown. ‘It is more like their operation is a hustle and a self-serving entity.’

Both Illo and Stars of the Sea have flouted the city’s public health guidelines to hold religious events.

In one instance, residents complained about a Mass service held on June 14 that was confirmed on the church’s bulletin board and in a YouTube video.

In the video, ‘neither the priest giving the sermon nor the altar boy are wearing face coverings.’

Later, Star of the Sea Parish was issued a cease-and-desist letter by the city attorney’s office for holding ‘multiple indoor large gatherings at its facilities.’

The cease-and-desist from City Attorney Dennis Herrera ordered the archdiocese to stop indoor religious services held in recent weeks or get slapped with a temporary restraining order.

‘Upon reviewing the reports of multiple San Francisco parishes holding indoor mass over the last few weeks, (San Francisco Health Officer Dr. Tomás Aragón) has concluded that the archdiocese is putting not only its parishioners but the larger community at risk of serious illness and death,’ wrote Herrera.

‘Dr. Aragón finds quite troubling the failures to comply with the face covering health order that are endangering not only parishioners, but particularly the children who serve as altar boys,’

Herrera wrote that city officials contacted the archdiocese several times to share San Francisco’s reopening planes. A spokesperson for the archdiocese said there was some confusion surrounding public health guidelines, but priests have been informed of the update. 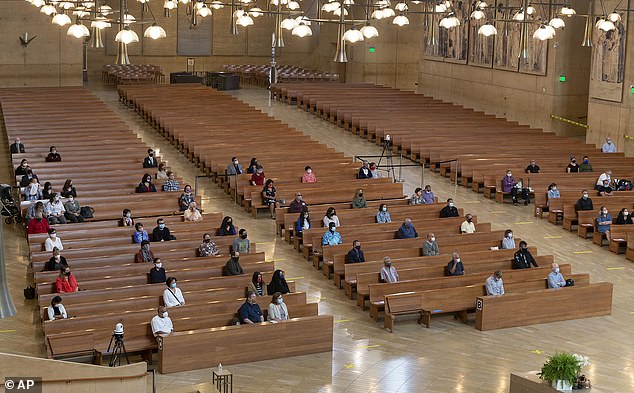 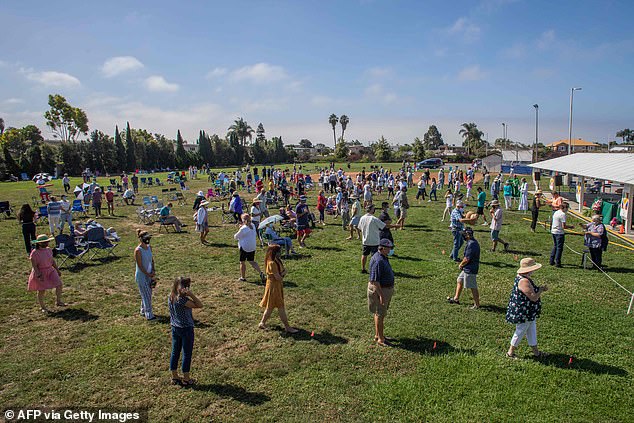 At the moment, it’s unclear if Star of the Sea will continue to hold in-person Mass, but the church’s website has a schedule of online streamed services.

In California and across the country, some religious institutions ignored lockdown orders and suggestions from top health experts during the panedmic.

In July, city officials in San Francisco shut down a secret Catholic wedding with 100 guests held at Saints Peter and Paul Church in North Beach. Guests were asked to enter the enter the venue though an underground garage.

The newlywed couple and at least eight people tested positive for coronavirus after the wedding.

On Easter Sunday, Spell had more than 1,300 people in his church to celebrate the holiday.

One 78-year-old parishioner died of coronavirus in the wake of Spell’s continual services. Spell denied the diagnosis.

Apart from public health violations, Illo has a history of controversial opinions and actions.

Many parents blamed Illo when the Star of the Sea K-8 school cancelled classes because of the declining enrollment. They claimed  Illo had several disagreements with parents.

Parishioners in 2015 later protested Illo’s ban on allowing girls to serve at the alter during Mass. 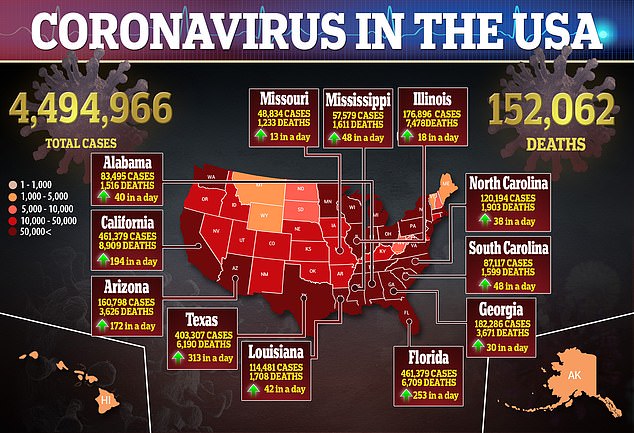 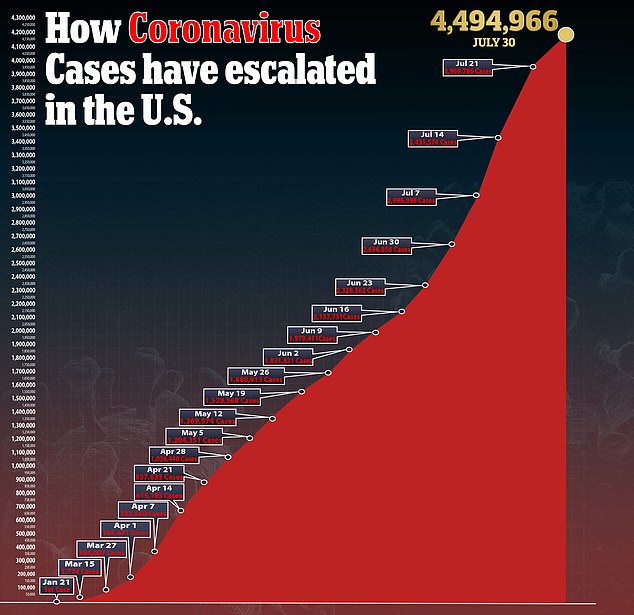 Another time, Illo allegedly demanded that a man order his wife to apologize over her complaints about the priest’s handling of the school, SFChronicle reports.

Even before coming to San Francisco, Illo made waves in Modesto, Texas, over his comments about former President Barack Obama.

He told parishioners in 2008 that voting for Obama, who supported abortion rights, should result in a trip to the confessional.

‘Voting for a candidate who promises ‘abortion rights,’ even if he promises every other good thing, is voting for abortion,’ said Illo.

‘It is a grave mistake and probably a grave sin.’