Republicans’ $1 trillion coronavirus relief package was in trouble Tuesday as the party began to lose support for the measure from its own members while Democrats decried a billion dollar provision to build a new FBI building near President Donald Trump’s Washington D.C. hotel.

‘It’s a mess,’ Republican Senator Josh Hawley of Missouri told reporters on Capitol Hill Tuesday afternoon after he left a party luncheon where the legislation was discussed.

‘There is significant resistance to yet another trillion dollars. The answer to these challenges will not simply be shoveling cash out of Washington, the answer to these challenges will be getting people back to work. And as it stands now, I think it’s likely that you’ll see a number of Republicans in opposition to this bill and expressing serious concerns,’ he told reporters on Capitol Hill. 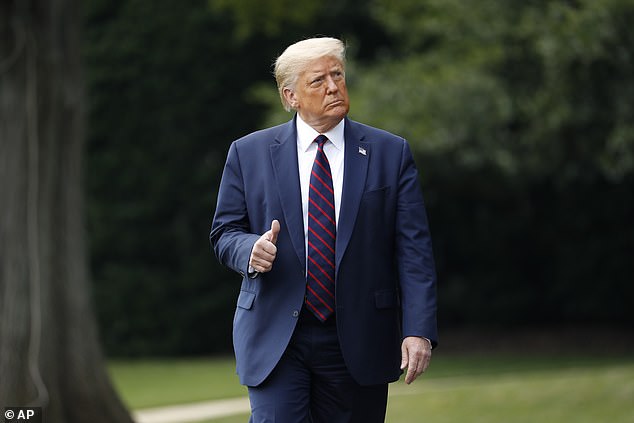 President Donald Trump, meanwhile, has been personally interested in a money for a new FBI headquarters being included in the coronavirus relief measure

Conservatives have joined Cruz in decrying the trillion-dollar price tag.

‘We don’t have any money in Washington,’ Republican Senator Rand Paul of Kentucky said. ‘There’s no rainy day account, there’ no savings account. So I’m not for borrowing another trillion dollars to pass out. That’s an illusion of wealth, not real wealth, when you create money and give it to people.’

Also damaging the package is a $1.4 billion provision to build a new FBI building, which sits diagonally across Pennsylvania Avenue from the Trump International Hotel Washington D.C.

Republican Senator Lindsey Graham of South Carolina, a close ally of President Trump’s, told reporters on Capitol Hill Tuesday he’d be fine with stripping the FBI building money out of the package, which is designed to bring another wave of economic relief in the wake of the coronavirus pandemic.

‘I don’t know,’ he said when asked why the FBI provision was in there. ‘That makes no sense to me.’

But White House Chief of Staff Mark Meadows expressed confidence the FBI funding would not hold up a final deal.

‘There are a number of things in the last bill that had nothing to do with the coronavirus. I think everybody acknowledges that it’s a funding mechanism. And I don’t see it standing in the way of us getting a deal,’ he said Tuesday afternoon of the money.

Democratic leaders Speaker Nancy Pelosi and Senate Minority Leader Chuck Schumer have been meeting with their Republican counterparts and top administration officials Treasury Secretary Steven Mnuchin and Meadows as all sides try to hammer out a bipartisan deal.

There was no sign of one on Monday night when the participants left the Capitol but they are expected to regroup Tuesday afternoon for another round of talks.

Democrats also decried the money for the FBI building.

‘They don’t have money for food stamps, but they have money for an FBI building just so that they can diminish competition for the president’s hotel,’ Pelosi said to reporters after meeting with Mnuchin and Meadows on Monday night in her Capitol Hill office.

She charged the president wants to refurbish the existing FBI headquarters ‘so that nobody could build a hotel across the street’ from the Trump International Hotel.

Schumer also slammed the president for the FBI building funding.

‘They managed to have enough money for $2 billion for the FBI headquarters that benefits Trump hotel, and they say they have no money for food assistance. What the heck is going on?’ Schumer said.

President Trump has taken a personal interest in the FBI project but neither administration officials nor Republican lawmakers have articulated why the money is in a coronavirus relief bill.

Critics charge the president wants to keep the FBI building at its current Pennsylvania Avenue location – the administration squashed a previous plan to move it the suburbs – to benefit Trump’s D.C. hotel. If the headquarters moved to the DC suburbs, it would leave the lot in downtown Washington DC open for development.

Republican Senator Richard Shelby, the chairman of the Senate Appropriations Committee, said the FBI money was in the measure at the request of the White House.

‘That was an administration request,’ he told reporters Tuesday. 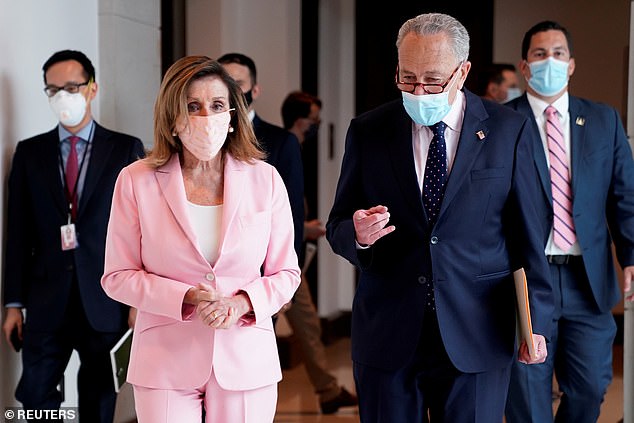 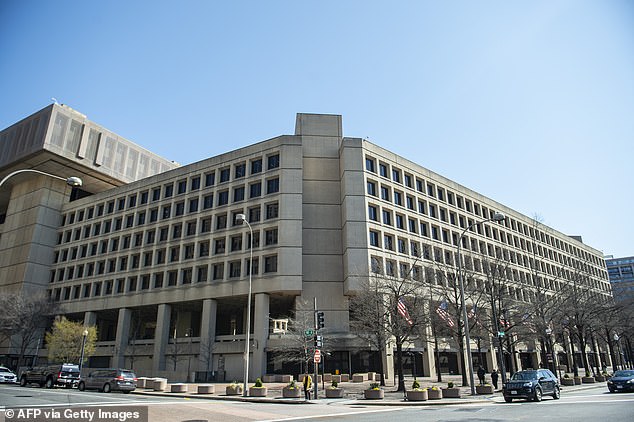 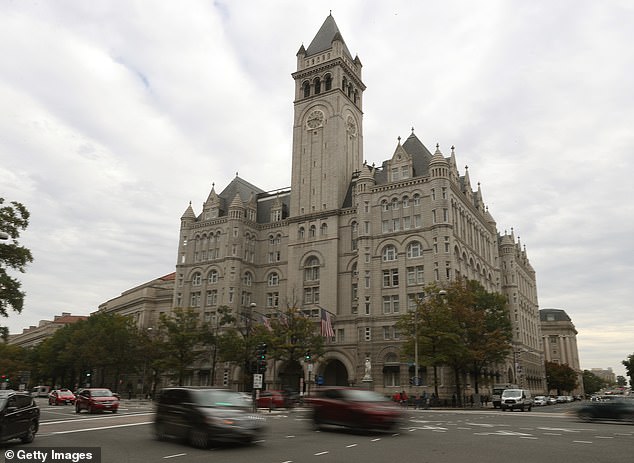 Trump told reporters at the White House last week that the FBI needs a new building. The J. Edgar Hoover Building was built in 1963 and there is general agreement it is in need of an upgrade. The debate is over refurbishing the existing building, tearing down the existing building and building a new one on the same site or moving the FBI headquarters out of downtown D.C. and into the suburbs.

‘You can renovate the existing building — but it’s not a good building — or you could take it down and build a great building for the FBI for 100 years and have it be incredible. Even with tracks on top, they’re talking about — you know, we have — because FBI people like to work out a lot. And you could have, literally, quarter-mile tracks on top. It’s a very big site, a very wide site,’ the president explained at last week’s press briefing.

‘So I think the idea — the best idea would be to build a new building. And that way, you have it for a long time. Renovation can never be as good as a new building, in that case. I know they’re talking about it, whether or not they put it in this bill or someplace else. But the FBI needs a new building, and we’ll get it done,’ he added.

Negotiations have been ongoing since Senate Republican leader Mitch McConnell unveiled the Republicans’ $1 trillion coronavirus relief package Monday afternoon. It will cut weekly unemployment benefits from $600 to $200 and include a second round of $1,200 direct checks.

‘In fact, we’ll propose a weekly dollar amount that is eight times what Democrats put in place when they controlled the White House and Congress in the Great Recession,’ he said of the reduced benefits.

Pelosi, however, pushed back during an interview with MSNBC following the bill’s unveil.

‘Why are you quibbling over $600 when people need that to buy food, pay rent,’ the California Democrat lamented.

McConnell said from the Senate floor Monday afternoon that U.S. economic recovery has been ‘promising’ so far – claiming there is one foot in the pandemic and one foot in recovery. 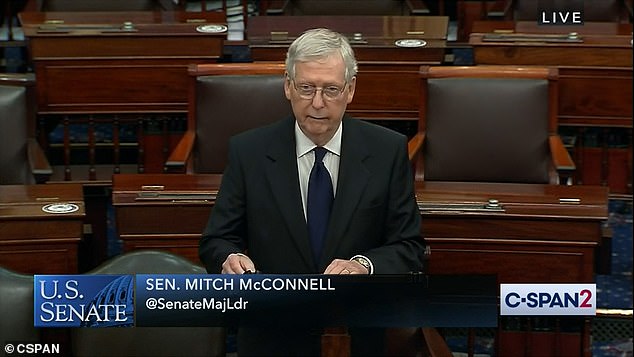 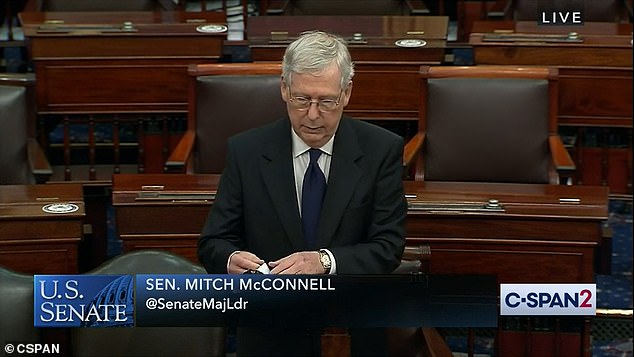 McConnell detailed that the package includes reducing a boost in weekly unemployment benefits from $600 per week to $200 and another round of $1,200 direct checks. ‘American people need more help… Republicans want to continue a federal supplement to state unemployment insurance’ 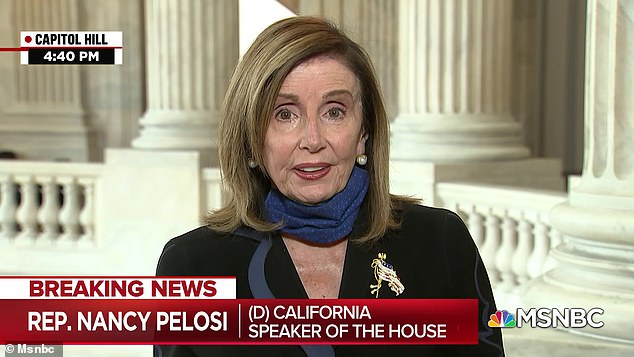 House Speaker Nancy Pelosi pushed back during an interview with MSNBC following the bill’s unveil: ‘Why are you quibbling over $600 when people need that to buy food, pay rent’ 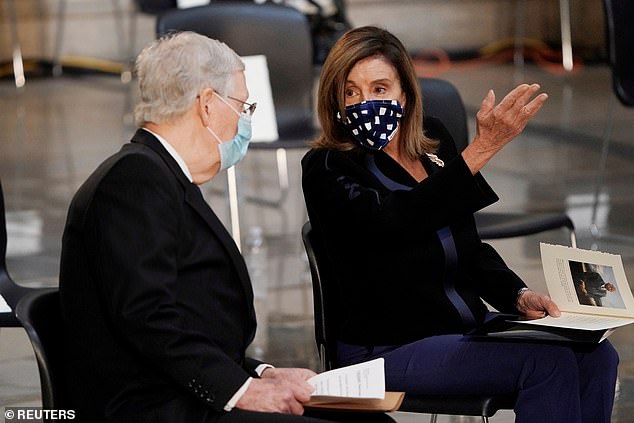 Earlier in the day Monday, McConnell and Pelosi sat side-by-side as they honored the late Democratic Representative John Lewis’ life as he lied in State in the Capitol Rotunda

The proposal to reduce unemployment benefits comes after Mnuchin and Meadows announced over the weekend that the White House wants to cap the relief at 70 per cent of initial wages.

This is intended to be an interim measure until states are able to implement a program where workers would be paid 70 per cent of the income they collected pre-coronavirus.

McConnell also touted a measure that would send a second round of $1,200 relief checks to Americans like was included in the sweeping stimulus package earlier this year.

‘Chairman [Chuck] Grassley will introduce another round of direct checks for households with the same amount as before, with even more support for Americans who care for vulnerable adult dependents,’ McConnell detailed.

The Republican bill comes after Mnuchin and Meadows spent the weekend on Capitol Hill negotiating with GOP leaders over the details of the legislation.

The duo initially said this weekend that the 70 per cent wage compensation program would be in the phase four coronavirus relief package.

The $600 boost in benefits is set to expire in the next few days, meaning if a compromise is not reached, Americans who lost their job during the pandemic could lose thousands of dollars every month.

Democrats, on the other hand, have proposed extending the $600 weekly jobless benefit until January, arguing that the unemployment rate remains unnaturally high due to the health and resulting economic crisis.

He also said it would allocate $100 billion to reopen schools as the White House pushes for schools and universities to resume in-person classes in the fall.

‘We’re talking about more than $100 billion more for an education fund than House Democrats put aside in a bill that spent multiple-trillions,’ he said. 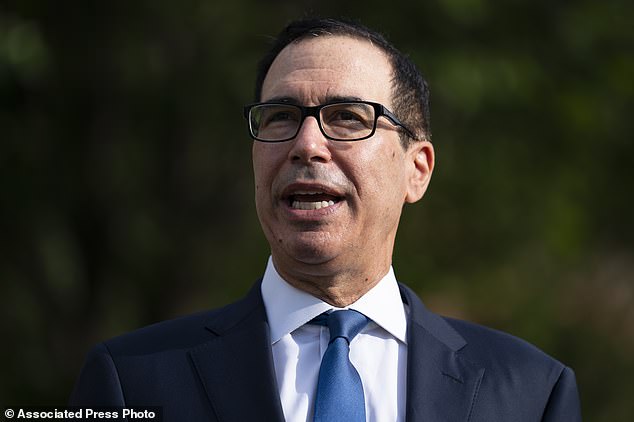 If passed, it would also protect employers from facing lawsuits over transmission.

Mnuchin also vowed over the weekend that the second round of direct checks would be administered in August.

Even with significantly decreasing the weekly unemployment benefits, the latest bill could be dead on arrival as it is still unclear if Republicans will approve another $1 trillion economic stimulus package.