Coronavirus US: Rise in cases may be ‘new normal’, says expert

A former Food and Drug Administration chief has warned that rising coronavirus infections across the United States could be the ‘new normal’ as states continue to reopen.

Dr Scott Gottlieb told NBC’s Today that health experts had expected to see declines in new cases by now and that the spread of the virus may not go down any further as parts of the US start to relax lockdown measures to reopen their economies.

‘We still have a high level of infection in this country. We’ve reached a plateau, but we haven’t seen the kind of declines we were expecting to see at this point,’ Dr Gottlieb said.

‘We need to understand this may be the new normal.

‘We may not be able to get transmission down much more. I hope we can but as we reopen the country… most likely scenario cases go up and not down.’

In the US, the number of infections has increased to more than 1.2 million and nearly 70,000 Americans have died from COVID-19.

Dr Gottlieb said cases are going up across the country apart from in epicenter New York, which remains on strict lockdown and has seen a 14-day decline in infections and deaths.

‘Once you back out New York, where you really have seen those sustained declines, around the rest of the country cases are actually going up,’ he said.

He said that while social distancing worked to flatten the curve and prevent hospitals from being overrun, the US has been in a ‘sustained plateau’ for about 30 days now.

Dr Gottlieb said mitigation wasn’t going to end transmission of the virus and that the case count was likely to creep back up throughout the country during May.

It comes as a revised model often cited by the White House doubled its death toll predictions late Monday, saying that nearly 135,000 Americans will die from coronavirus by August. 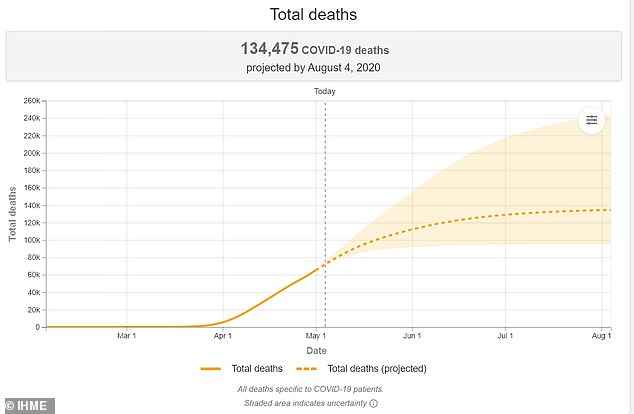 A revised model often cited by the White House doubled its death toll predictions late Monday, saying that nearly 135,000 Americans will die from coronavirus by August 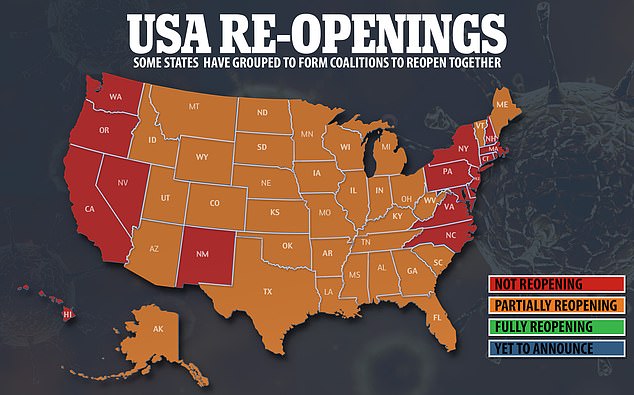 The revised predictions, which are almost double what they were last week, come as social-distancing measures for quelling the pandemic are being increasingly relaxed across the US.

Researchers say the ominous new forecast from the University of Washington’s Institute for Health Metrics and Evaluation reflect ‘rising mobility in most US states’ with an easing of business closures and stay-at-home orders expected in 31 states by May 11.

‘We expect that the epidemic in many states will now extend through the summer,’ IHME director Dr Christopher Murray said in a statement.

The projections reinforced warnings from public health experts that a rising clamor to lift restrictions on commerce and social activities – in hopes of healing a ravaged economy – could exact a staggering cost in terms of human lives.

The institute’s predictive coronavirus model, periodically revised to account for changing circumstances and scientific insights surrounding the pandemic, has become an influential data point often cited by the White House and public health authorities in gauging the crisis.

The IHME projections are presented as a statistical range of outcomes. The latest forecast predicts the cumulative number of U.S. deaths from COVID-19 will run from as few as 95,092 to as many as 242,890 by August 4 – with 134,475 lives lost representing the most likely, middle ground.

The upward spike reflects increasing human interactions as more states begin to ease social-distancing requirements – the chief public health tool available to curb the spread of a highly contagious virus for which there is no vaccine and no cure. 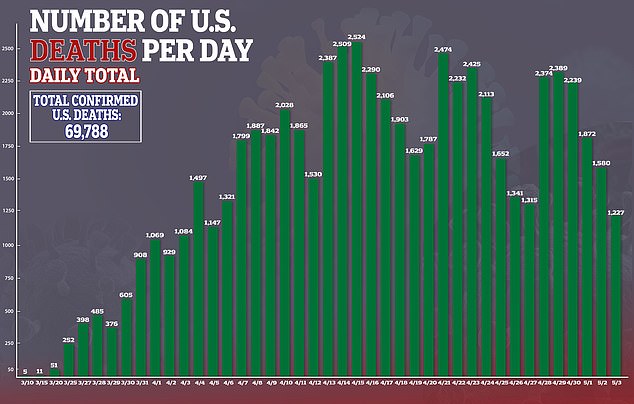 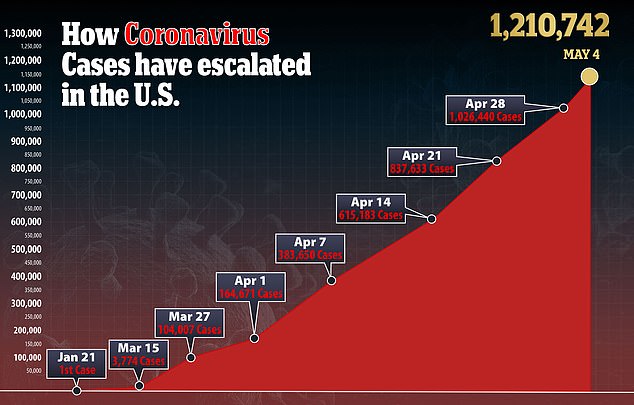 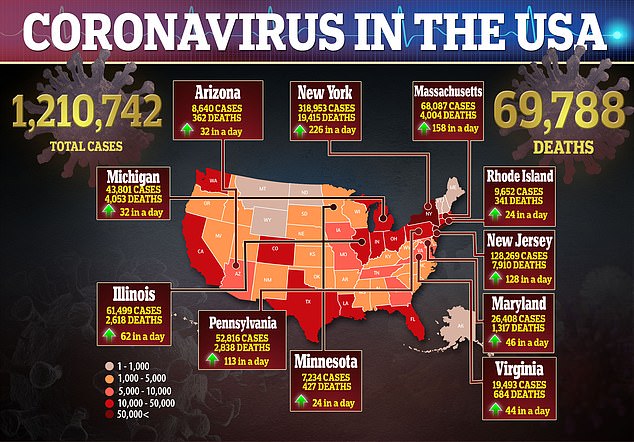 The relaxation of social-distancing rules will more than offset any decline in transmissions that might come from warmer weather and stronger containment measures, such as more wide-scale testing and tracing the contacts of infected people so they too can be tested and isolated, Murray said.

The revised IHME projections coincided with disclosure of an internal Trump administration forecast predicting a surge in COVID-19 cases killing 3,000 Americans a day by the end of May, up from a current daily toll at around 2,000.

That projection, first reported by the New York Times, also forecast about 200,000 new coronavirus cases each day by the end of the month, up from the current rate of about 25,000 cases every 24 hours.

In New York, the state that accounts for about a third of all US infections, Governor Andrew Cuomo on Monday outlined plans to ease restrictions on a regional basis.

Without giving a specific time frame, Cuomo told a daily briefing that construction, manufacturing and the wholesale supply chain would be allowed to start up under the first phase of a four-step return to normality.

California Governor Gavin Newsom said on Monday he would ease the state’s stay-at-home orders by Thursday, expanding the number of retail businesses that can provide curbside services.

Florida began a gradual restart of its economy on Monday. In the first phase, retail merchants and restaurants will open, with indoor patronage limited to 25% of capacity. Eateries are also allowed to open outdoor seating with social distancing, and medical practices can resume elective surgeries and procedures.